But the real meat is about modelling these guys in DC Heroes role-playing game terms.

A vampire is an undead being, not truly alive, but upwardly mobile in that “Hey, I want to bite you” way.

They are stronger and faster than normal humans. They can appear as the human whose body they’re occupying until the last second, then shift into a more feral, fanged appearance. They retain the memories and some of the personality of the human and can appear to be that human so well that few can tell the difference.

Vampires have better hearing than humans, can heal most wounds very quickly and can smell blood from a hundred yards. They have extremely sharp teeth (duh) and no need to breathe oxygen.

Perhaps most importantly, they cannot be killed except in a very few specific ways:

They fear consecrated or holy objects, which can cause them physical pain as well. When killed, a vampire instantly crumbles to dust.

Ages ago, True Demons ruled the world. They lost their purchase on this reality by the rise of man. One of the last creatures sent packing mixed his blood with a human, creating the first vampire (a Turok Han, as they would later come to be known).

As they propagated, they spread across the globe. Humans far outnumbered them, so they kept to the shadows, becoming only legends to most of the world. They can be found in most major cities as almost a subculture, living everywhere from abandoned buildings to sewers to corporate boardrooms.

Vampires appear exactly as the humans whose bodies they inhabit until they reveal their true demonic visages. Their faces shift to a more feral, predatory look. Their eyebrow ridges become more pronounced, their eyes deeper set and their teeth extend into a jagged row of fangs.

As they continue on, they regain better control over their faculties, managing to go incognito as humans in order to hunt more efficiently. A vampire retains the memories of the corpse and often act like the person inadvertently.

Most importantly, a vampire has no soul, which mainly has the effect of imparting no conscience or empathy to the vampire. They are the ID unrestrained.

Anyone who becomes a vampire (through the use of Propagation Advantage) gains the following Powers, Skills, Advantages and Disadvantages.

Skills:
The vampire gains +2 APs of Martial Artist, added through AP math (if the target does not have the skill, he gains it at 2 APs. if he already has it, use the following method: if the two values are within three columns on the Action or Result tables, take the higher value and add 1. if they are not within three columns, use the higher value)

Advantages:
Life Support (Breathing), Propagation (all powers, skills, advantages and drawbacks listed here; victim must be killed by vampire’s Claws attack and have drank some of the vampire’s blood when at Current Body less than 0, but still alive).

Drawbacks:
Blood Craving, Creature of the Night, Miscellaneous (a vampire casts no reflection in a mirror, gains sustenance from blood instead of food and water, and do not need to breathe nor give off body heat), SPR (A vampire cannot enter private dwellings of living humans without an invitation from one of the residents), Strange Appearance, Unholy

Vampires rely on blood for sustenance, and drawback acts like Rage with a target number equal to APs of time without blood -15. Should a vampire consume human blood regularly (at least once or twice a day), they gain Rage at a severity depending on the length of time they’ve been consuming the blood:

Should a vampire consume human blood than go without blood as above, use the higher target number.

Creature of the Night

When exposed to direct sunlight, vampires burst into flame. After 1 phase of exposure, direct sunlight acts as a 2/2 AV/EV fire attack. Each phase of continued exposure accumulates a -1 CS penalty to the OV and RV each. A blanket, thick tweed suit or other covering can increase the vamp’s RV (as long as the covering is opaque) according to the Partial Armor rules.

The Shade power bought with a +1 FC Bonus may allow for gadgets such as “necro-tempered” glass, which add the Shade APs to the Vampire’s RV.

Vampires are abominations that are outside the realm of religion. Contact with holy water, consecrated land, bibles or crosses is considered akin to a Mystical Flash attack (Shade does not protect unless it’s Mystic Linked) using 2/2 as AV/EV and the vampire’s Body/Body as OV and RV.

Ingesting Holy Water also triggers an attack like described under Creature of the Night, except covering does not protect the ingester.

Due to the vagaries of television production and differing writers’ works, the concept of whether or not a vampire needs to breathe proves problematic.

By the writer’s intent, vampires do not need to breathe and cannot die from asphyxiation. However, evidence from the shows suggest that vampires breathe on a regular basis. To combat this, the GM may decide to use this optional rule. Instead of Life Support (breathing), all vampires get Sealed Systems: 15 instead. 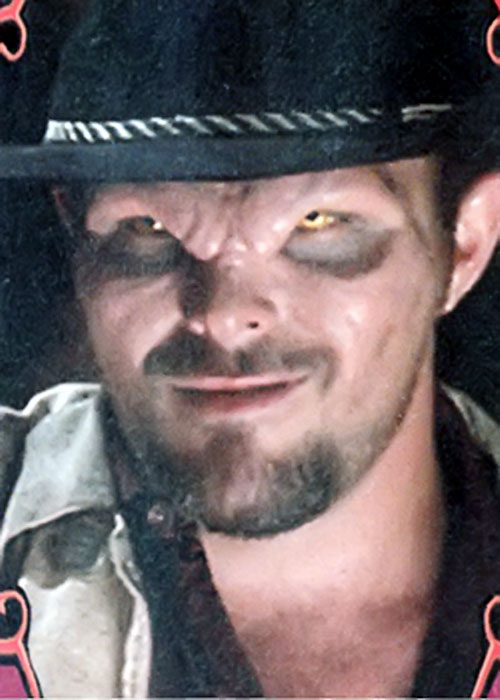 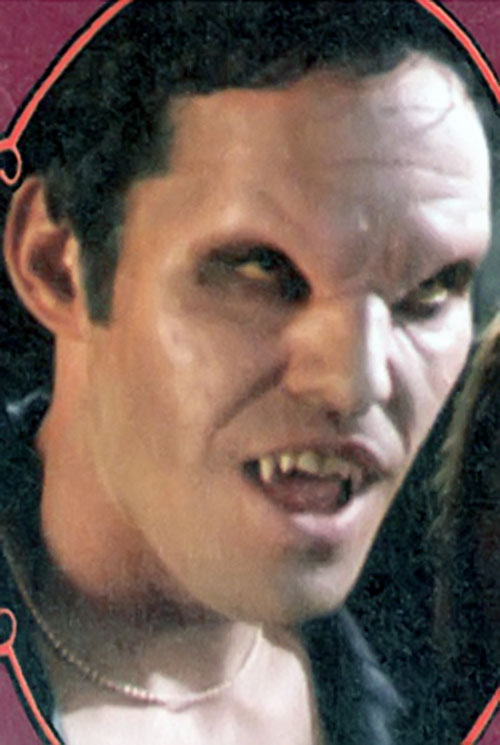