While it can be rather difficult to get into the mind of this twisted individual, Vampiro seems to be quite adept at reading the emotional state of others. He also has the ability to, with but a touch, bring out a victim’s greatest fears and drain their very life force.

He is an accomplished combatant – both hand-to-hand, and with various forms of weaponry.

Born in Thunder Bay, Ontario, Canada, Ian Hodgkinson seemed like any regular Canadian boy. He grew up wanting to play professional hockey. Unlike most, he succeeded in becoming part of a semi-pro team, but it wasn’t enough for him. He wanted out of small town Canada, leaping at any opportunity to do so.

He quit the hockey team, thinking he would tour with his rock band. But it was not to be, as the band kicked him out of their van and left without him.

With nowhere else to go, Ian interrupted a rather large man during his dinner. He offered him his last $40 if he would only take him out of town.

The man, obviously annoyed but saying nothing, picked up his dining fork, and… stood in momentary shock as Ian would accidentally step between him and an incoming surprise attack. The man would then proceed to grab their attacker and brutalize the fool with the very fork held in his hand.

The next morning, after sleeping in one of the trucks of the man’s entourage, Ian would wake to the site of Abdullah the Butcher standing above him with the same bloody fork.

Abdullah did not say a thing, but allowed him to live. He left him bleeding on the ground with nothing but a newspaper listing his bandmates’ murders and a scribbled Mexican address. Ian would never sleep well again.

An actor friend would partially come to Ian’s rescue, springing for a one-way ticket to Los Angeles. He also got him a role as an extra in the film Eddie & the Cruisers. This too, went nowhere, and soon Ian was again on his own.

Hodgkinson was homeless, restlessly sleeping whenever able underneath cars around Sunset Strip and Hollywood Blvd. Ian would become known as a “Hollywood Vampire”, due to his lifestyle of living on the streets and roaming the city after dark.

Another lucky break would soon present itself however. He was hired as a bodyguard for a pop music duo. Touring with the group did allow for certain sudden benefits, such as traveling the world and meeting various other people involved in “the industry”. Unfortunately, once Milli Vanilli  was exposed as lip-synching fakes, Ian was yet again left with no place to go.

No-one knows what became of Ian’s life and money during this time. Many have speculated that both were lost to various well-connected criminals. He would return as a remorseless undead killer, never sleeping, hunting down in “Crow”-like fashion those that made him what he was.

His mission accomplished, he decided to take the $75 he had left and head for that fateful address in Mexico.

Arriving in Mexico with nothing, Ian met with people at the given address. Instantly, the man in charge took a liking to Ian, named him El Vampiro Canadiense, and began to show him the high life.

Soon, Vampiro was known as a hero all over Mexico, popular with everyone, including children. A new rock band, his own soap opera (El Vampiro Casanova) and even his very own movie Vampiro: Night Warrior… from famine to feast, Ian ended up having it all.

This did not sit well with the man in charge’s former favorite person, Konnan. Formerly Konnan el Barbaro, the thug took offense at Vampiro usurping his fame with the Mexican people. The two have a heated hatred for each other that lasts to this very day.

Ian knew better than to question his fortune, after having lost everything a number of times in his life. Sure he was being prostituted, but what could he do? Turn his back on the man that made him famous, the friend of Abdullah the Butcher, who had spared his life and given him this chance?

He decided that he would earn his keep as more than just a media figure, taking on behind-the-scenes sanctions of his benefactor’s enemies in Mexico and Japan.

Konnan leaked the word that Vampiro was nothing but an assassin, and a sizable portion of the public turned against Ian. If not for the help of a woman named Kitsu (now his wife), Vampiro may have disappeared completely.

With all the hype surrounding these two sensations, a man from Atlanta, Georgia by the name of Eric Bischoff offered them, and others from the area, employment as freelance operatives in his so-called World Crisis Watch.

Back in the United States, and eventually, Los Angeles, Vampiro briefly teamed with the independent hero known as Sting, in an attempt to finally clear up the case of the murderous vigilante from a few years prior.

All seemed to be going well until Sting, fearing betrayal, began investigating Vampiro’s history. Sting turned up information linking Ian to the murders of multiple past associates not only in Los Angeles, but in Canada, Mexico & Japan as well.

When confronted with this information, Vampiro viciously attacked Sting, set him on fire, and left him for dead. Vampiro (pyro?) has been on the run ever since, ever alert, lest his past catch up to him once again.

Vampiro has the late night-alien-zombie-goth look down perfectly. With his black, braided hair dangling in front of his white, skull painted face, he resembles a dangerous cross between a tribal witch doctor and an undead Raggedy Andy .

Dressed entirely in black, he occasionally wears leather jackets and vests. But more often than not he is topless, displaying the numerous intimidating tattoos across his arms, shoulders & chest.

Vampiro comes from a poor and ungrateful background. What you see with Ian is what you get. His hard goth rocker image may seem an act, but is instead truly how he lives 24/7. He can be down to earth and gracious, yet, when hard pressed, turn fiercely defensive.

He is kind and giving to those that treat him well, yet those who threaten to take anything away from him will incur his sadistic wrath. Years of hard fought life and vampiric hunger have twisted his humbleness into a dark sense of justice.

Given the proper circumstances (such as Mexico, before things got overblown), he can play the role of the heroic dark knight. Yet it is only a matter of time before things get darker than they should.

“I don’t think you live until you’re dead.”

Ian Hodgkinson’s transformation could have been caused by various characters from the DC universe. Take your pick.

Bonuses and Limitations:
Vampirism and Phobia have a range of Touch only.

Source of Character: Professional Wrestling, along with a twisting of actual history based on info gathered from various fan guides. 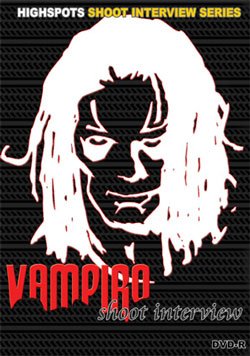 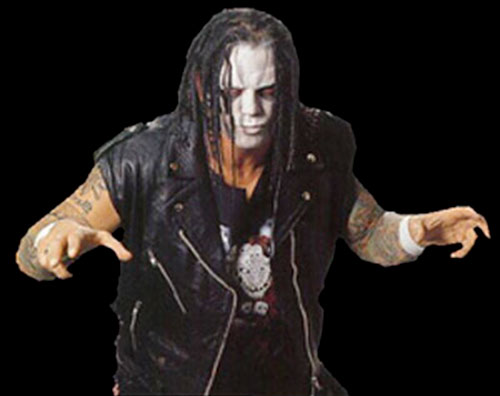 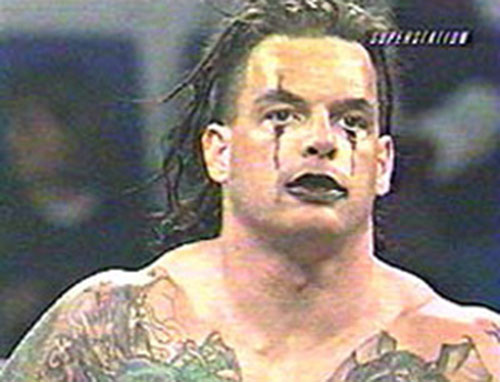