Halt, comrade ! For this profile is part of a series, to be read in order :

Vanguard’s general abilities are mostly unchanged from the 1980s.

But as this era starts he makes two important advances in mastering his powers :

We also once see him disperse/deflect Quasar (Wendell Vaughn)’s quantum constructs by touch. This also seems to work against phasingBeing immaterial and able to walk through walls, like a ghost opponents.

As this era closes, Vanguard is briefly seen wielding what seems to be a Thor-style magical mallet.

It seems that this made Vanguard markedly stronger, and it could also fire lightning. 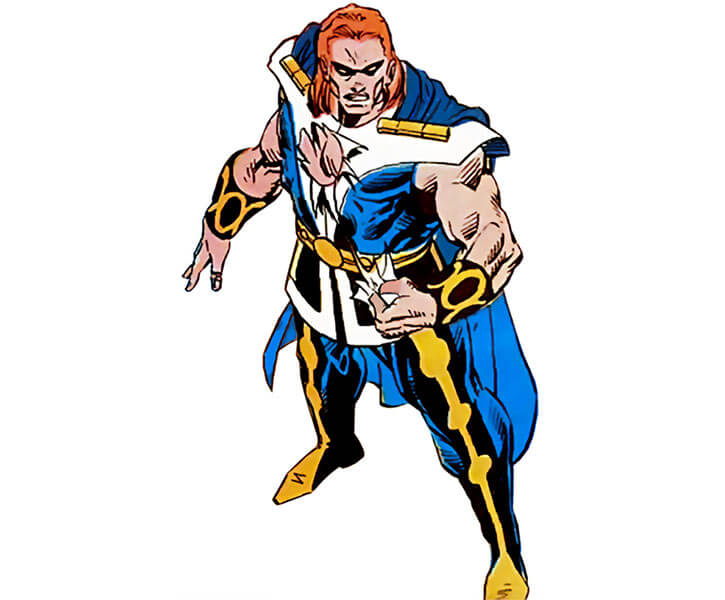 First thing that comes to mind for 1992 is the one-hit-wonder band Империя. They did anodyne 1980s-style synthpop.

I can see Vanguard loving this. And I’m told that this tune — Поезд на Ленинград (“Train to Leningrad”) — is still semi-popular with amateur Russian musicians.

At first, the former Super-Soldiers were too weakened to fight. They could but help evacuate hounded ex-Soviet mutants, who suffered significant casualties at the government’s hands.

Once recovered, they could repulse the military and Firefox (Grigori Andreivitch). The trio allied with the two combat-capable survivors among Garnoff’s refugees, Stencil and Sibercat (Illya Lavroff).

The new team briefly went by Exiles, then by Siberforce. See the Siberforce team profile for the subsequent events.

After the Starblasters crisis, Vanguard’s body was placed in a glass coffin in the Kremlin, as a hero of the Russian Federation. The Presence and Dr. Tania Belinskaya (now known as Starlight) visited often.

(For years, these events — in the final issue of the Quasar series — were accidentally ignored. Characteristically, it was Kurt Busiek who wrote a 2001 flashback revealing how Vanguard had returned to life.)

Circa 1996, on a hunch, the Presence shrunk to microscopic size. He entered his son’s superhuman body and found minuscule traces of lifeforce, which he rekindled.

As Vanguard abruptly awoke, the Presence was shunted beyond the Pym Barrier. It would be a few years before he managed to return to Earth-616The main Marvel Comics version of Earth. 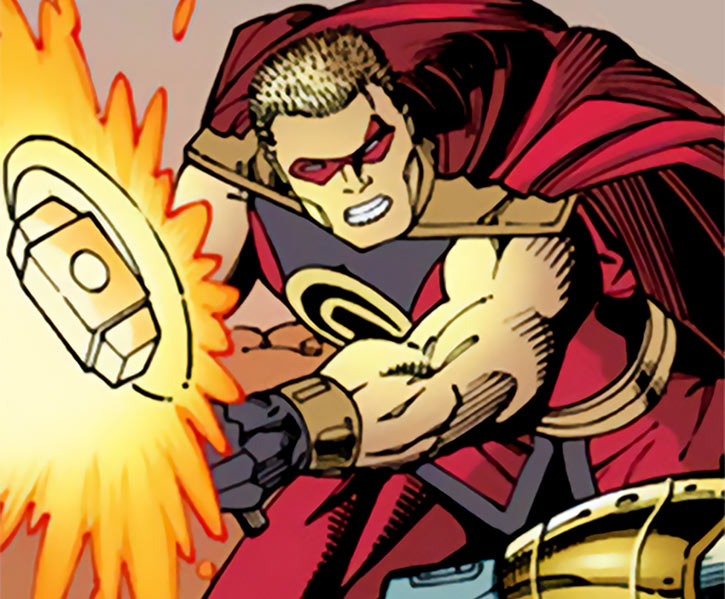 Sourcebook X-Men: the 198 mentions that Vanguard joined the People’s Protectorate. However, we never actually see him with that team.

A reasonable hypothesis is that he only served with the Protectorate in 1997.

For the subsequent events, see our Winter Guard profile.

In 2002, the death of Darkstar (Laynia Petrovna) drove a rift among the Guard. Most members, including Vanguard, left. They didn’t accept the notion of the government creating a new Darkstar.

An alternative team assembled, led by Vanguard. It was a new version of the Protectorate. The other members were :

Vanguard had a plan to resurrect his sister. The Protectorates therefore ventured into Limbo.

The Protectorate spent a year fighting for Immortus. Limbo being timeless, that year felt like several. During that time :

Near the end of the Protectorate’s contract, Fantasia revealed herself to be a Dire Wraith. She fled to Earth. The Protectorate gave chase, but had difficulties reaching the correct time period.

After a brief brawl with the Winter Guard, the Protectorate allied with them to stop Fantasia. They fought an army of Dire Wraiths – plus the Presence, who had allied with Fantasia.

The Winter Guard thus had to be reorganised. It was pretty much a return to the 1980s Super-Soldiers — Krylenko, Petrovna, Ursus, and Bukharin.

Nicolai changed his identity to become the new Red Guardian. However, he sometimes continues to use the name “Vanguard” while clad in a Red Guardian uniform. 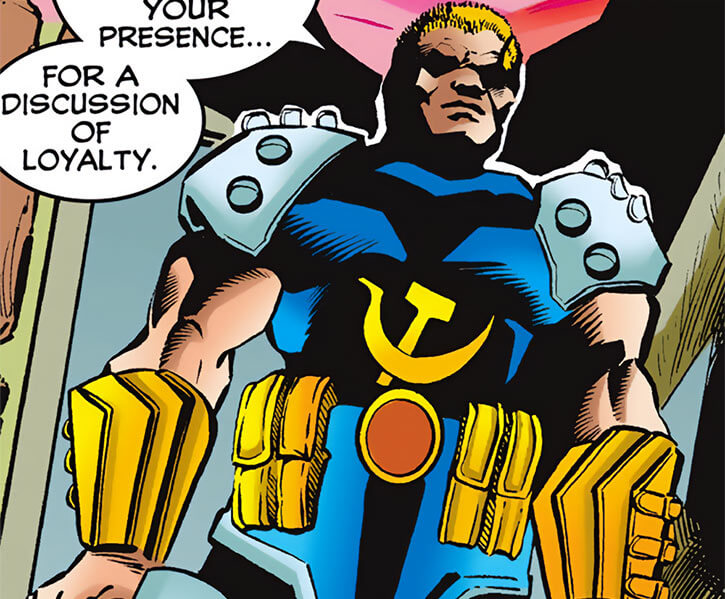 While in Limbo, Mr. Krylenko grew a full beard.

His chest emblem also switched to only depicting a hammer.

Vanguard remains prone to elaborate and thunderous declarations, but doesn’t really sounds pompous. He’s too impulsive for that.

He retains his slight Marvel-AsgardianThe reality of the Old Norse gods, such as Thor. vibe.

Vanguard prefers to use ethical methods. Though he’ll consider making an exception if his sister is in grave danger.

Mr. Krylenko dislikes Iron Man, seeing him as a champion of capitalism. More generally, his nurses-grudging power seems even higher than before.

Flag of our fathers

Vanguard has always wanted to uphold the Soviet Union. But for years his country violently rejected him out of anti-mutant prejudice, and betrayed him.

By 1992, Vanguard even tore out the Soviet symbol on his chest, leaving the torn hole in place. Take that, Power Girl.

However, he eventually resumed using the hammer-and-sickle combo, and Soviet — not Russian — colours and symbols. He has aligned with the Communist Party of the Russian Federation, which remains a major player, rather than the government.

Vanguard presumably sticks with the Marxist-Leninist traditionalists among the Party.

“This is our home ! The land we’ve sworn to protect !”

“What do you know of courtesy ? You certainly didn’t show courtesy to my dead sister when you defiled her body and her memory.”

MIA toward Impulsiveness. During some eras, Mistrust (Mutant).

Both Power Reserve and both Enhance stack So that’s 2+2=4 APs of Enhance (cap is 13), and 1+1=2 additional APs of Reflection/Deflection when he has both the hammer and the sickle. 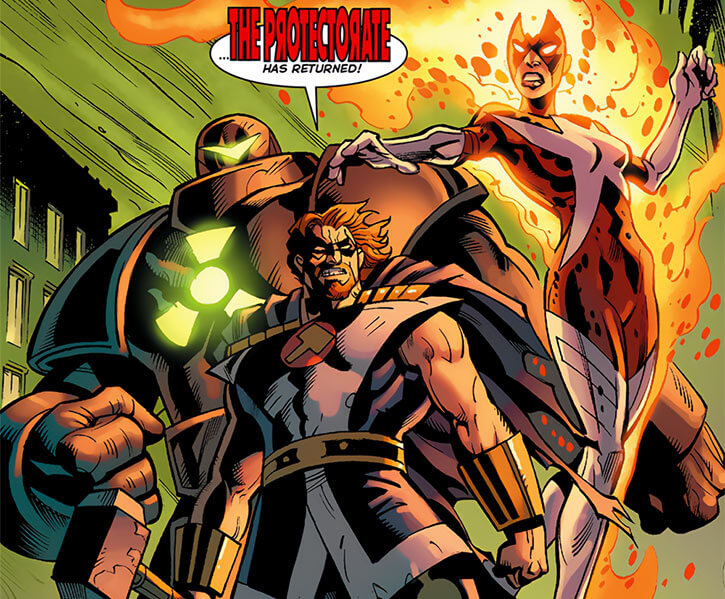 If I had a hammer

While wielding what seemed to be a Thor-style magic hammer, Vanguard :

If it was indeed Perun’s mallet, I’d assume it was forged by Slavic mythicalsGeneral name for fantastic creatures described in ancient mythologies, like unicorns or centaurs. That would mean a high BODY.

The stats block is primarily based on Soviet Super-Soldiers. After that, there isn’t enough material to assess stats. And the continuity, she wobbles.

While with the mutant underground, Vanguard had Mistrust, no Equipment and Wealth 02.

As previously noted, the weapons’ Power Reserve should technically be APs of Enhance. This would allow for his weapons to keep their old APs — except they now bump against the Enhance’s cap. One of Enhance’s advantages is not to have equipment stats inexplicably change depending upon circumstances.

Vanguard once seems to emit an energy blast from his crossed weapons. It knocked a phasing Kitty Pryde out.

That’s not how his powers normally work. And this Wolverine First Class story had other small continuity issues.

In this profile, our creative interpretation is :

It’s a made-up explanation, but it efficiently ensmoothens this discrepancy.