Vanguard is one of Marvel Comics’ Russian super-heroes.

To avoid covering the same ground over and again, the articles are presented in a series :

This first article about Vanguard covers the 1970s and 1980s. After that, his powers and costumes evolve.

“Nicolai Krylenko” is his official name, and the one he uses. However, it was given to him by the State to obscure his parentage.

Assuming that his parents did plan to call their kids Nicolai and Laynia, his name should have been Nicolai Sergeyevitch Krylov. And his twin would have been Laynia Sergeyevna Krylova. 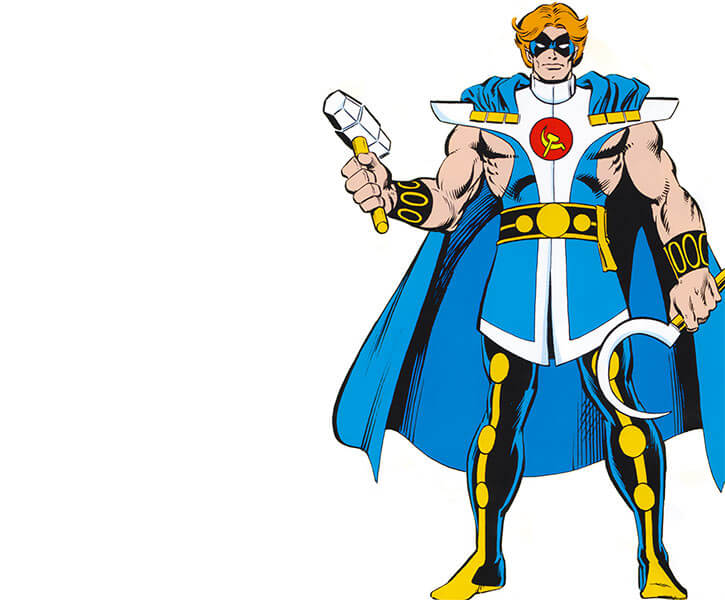 He is trained to fight with a hammer and a sickle. Primarily in close combat, but also as thrown weapons. He’s a solid fighter, but perhaps not the fastest.

One remark he made implies that he’s trained as an electronics technician. And perhaps as a pilot.

His strength and endurance do not seem quite normal. He seems to be at least in the peak human range. Probably a bit above it.

He can also be revived after suffering seemingly fatal damage. But that requires extraordinary levels of exotic energy wielded with great precision. 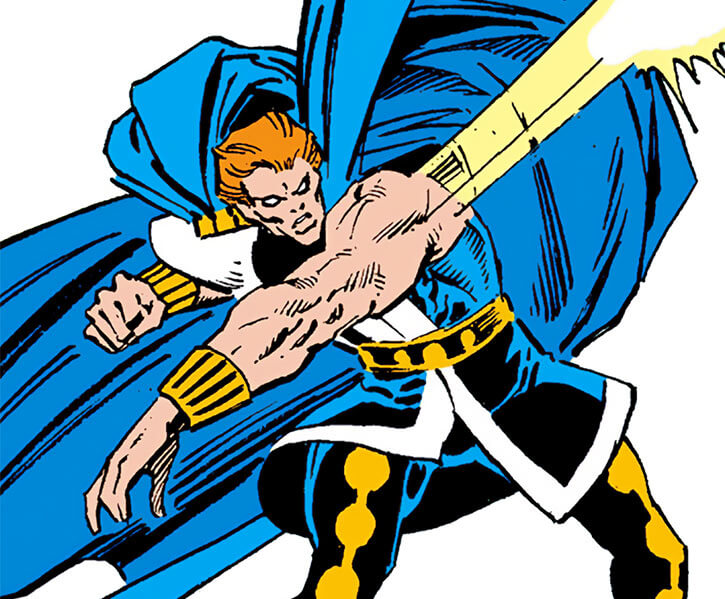 A superior capacity for reflection

Vanguard’s body is wrapped in a tight, invisible force field. With focus, this can deflect or reflect incoming force or energy.

Vanguard can thus have attacks hitting him hit the attacker instead. Or be reflected elsewhere. As long as he can see the blows coming, he’s practically invincible.

Mr. Krylenko could even reflect back the force of an angry Hulk’s punches. This did take the creature out. But it also demolished a big chunk of a mountain they were on. And left Vanguard barely able to stand.

At this stage, Vanguard needs electronics to make his force field focused and reflective. These are his hammer and sickle. Speaking of which…

Workers of the world, hit stuff

When Vanguard crosses his weapons across his chest, the electronics within focus his innate force field. He thus can fully use his reflection power, which is otherwise far more limited.

Vanguard’s hammer was once destroyed in a collision with Thor’s Mjolnir. By Krylenko’s next appearance it was intact. So he presumably has ways to repair it. On the other hand, such things tend to occur without explanations in comics.

This 1975 song was released when the Super-Soldiers graduated from Phobos’ school. Or at least it was in my first stab at a timeline, before Kathryn Immonen forced me to redo it all with her Agent Carter LS. IMMONNNEEENN !! (shakes fist) 😺

It’s a fine example of mid-1970s pop-folk, so it’s a good chronological marker.

The lyrics sort of match Vanguard. Because many contemporary listeners thought that the “Joe” of the song was Josef Stalin (it wasn’t).

(Finding a video for this led me to the realisation that the song is also used in the recent-as-of-this-writing 2020 version of Snowpiercer, sung by Lena Hall. Always cool to see much younger folks discover a song I’ve liked since I was a wee bairn.)

Everything for this era is in the Soviet Super-Soldiers’ team profile.

For the benefit of the younger readers : 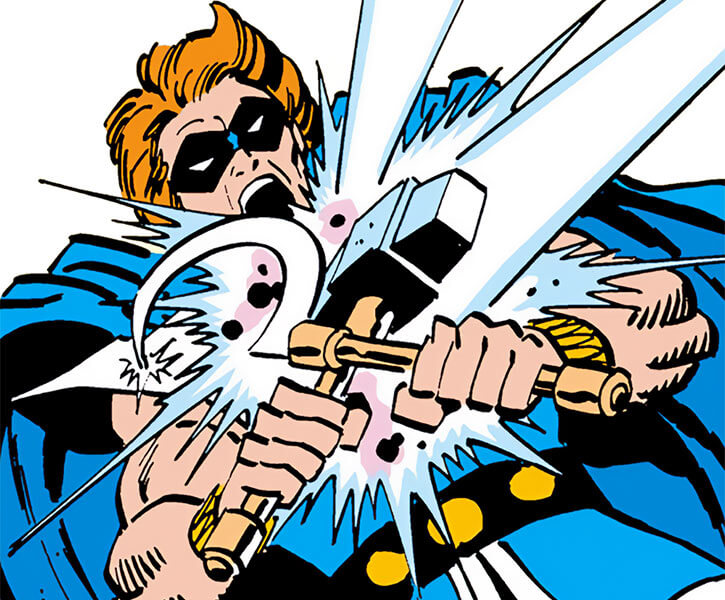 Krylenko is a hotheaded, proud young man. He usually thinks with his fists.

He’s quick to anger and revels in the glory of a good battle for The Cause, which he’s of course convinced is the Best Cause.

Vanguard is prone to making inflamed speeches and vigorously patriotic statements. Nothing passes his lips that isn’t thundering and definitive. And does not end with at least one exclamation mark.

He almost always refers to his weapons as “the overlapping symbols of the worker’s State”.

As can be seen in the quotes below, he throws around complex sentences as if he were an AsgardianThe reality of the Old Norse gods, such as Thor.. A *Communist* Asgardian !

However, he will listen to his sister and his best friend. This limits the damage his impulsiveness would otherwise do.

He is overprotective of his sister. He will attempt to help her if she’s threatened, no matter what. Even if she objects. 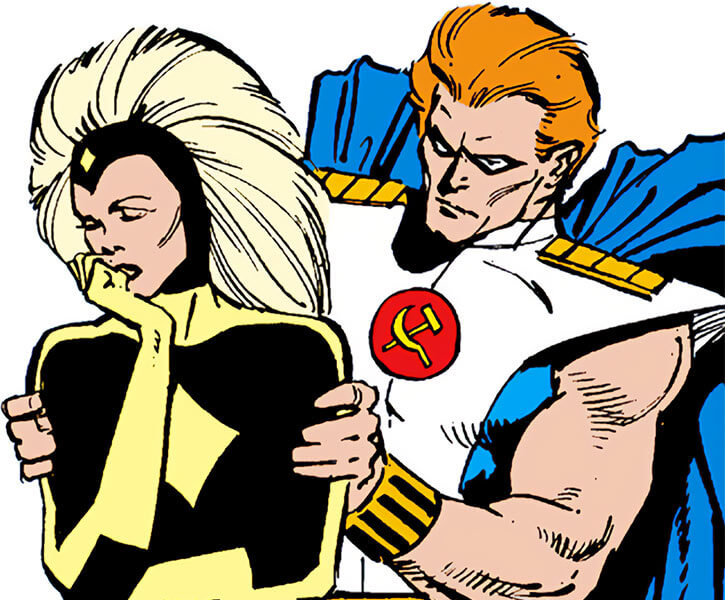 “You know nothing of power, American ! For Vanguard has yet to reveal the true strength imbued in the overlapping symbols of the workers’ State !”

“I sense a battle brewing… a chance to use my power !”

“Monster, you’ve hurt Laynia ! You’re very impressive when it comes to fighting women. Let’s see if you’ll do as well against Vanguard !” (engages the Hulk in combat).

“We are the only ones with the power to dare try !”

“Have no fear on that score, woman ! Vanguard’s power, focused through these overlapping symbols of the workers’ State, turns the aggressive might of an enemy back upon him !”

“They seek to destroy some secret installation that undoubtedly stands to safeguard the motherland !”

“By the great October revolution !”

“Perhaps this time it is both we and the State who have been deceived, my sister ! If that is the case, they who perpetrated this deception shall answer to the might of Vanguard !”

A Soviet agent with a hammer and a sickle seems inevitable.

But Marvel worked to make the character a bit more interesting. And Bill Mantlo  wanted to have Soviet characters who weren’t moustache-twirling black hats.

By contrast, Vanguard would likely have appeared but once in the DCU. Perhaps he fought Superman that one time.

Dependent (Darkstar – 0 pts, but he sure treats her as one), MIA toward Impulsiveness, MID of Americans. During some eras, Mistrust (Mutant). 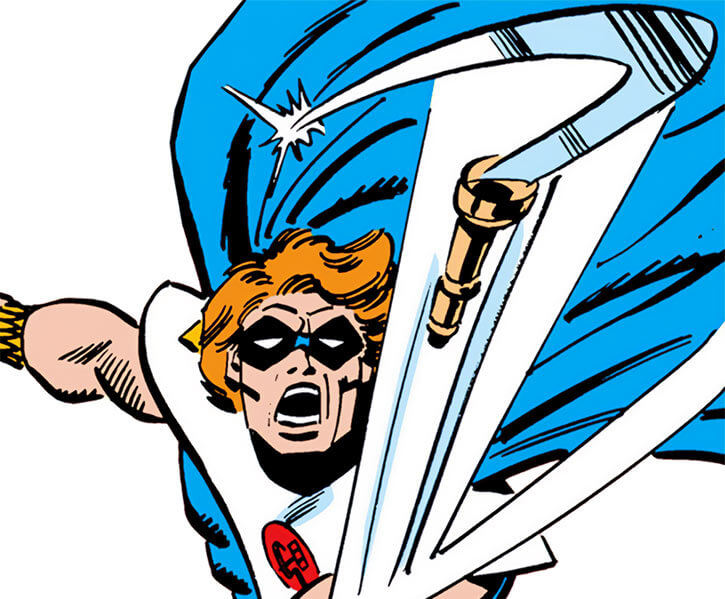 Strike for the motherland

Vanguard once hurls his weapon to fly in tight circles around Red Guardian’s head, dazing her and turning a minor blast against herself. This can reasonably be hand-waved as a Bashing Combat attack.

The weapons would technically be cleaner if modelled with two Enhance scores. Here I’ve used one Enhance and one Power Reserve so it’s clearer to read.

The Enhance and Power Reserve logic is that the weapons draw their power for him. And that each of the three components produce a sum greater than its part. But this is based on *impressions* about his power, not something clearly observed.

(Though he does seem easier to hurt when he only has one weapon, which is part of the modelisation.)

Most other Soldiers are considered fellow Player Characters rather than Connection, as often.

In Contest of Champions, a punch from Vanguard briefly staggers the Thing (Benjamin J. Grimm). In DCH modelisation it works with simple Hero Points spending — to EV 12. A “Class 50” blow would clearly be felt by Ben.

Still, this incident means that raising Vanguard’s STR a bit wouldn’t be absurd. I chose to stay in the zip code of his official estimate, but solely from the material he could conceivably be “Class 10” or so.

In Rom #45 Vanguard only speaks a little English. But that’s a continuity goof.

In his earliest appearances he likely didn’t have his Paired Weapons Schtick, and lacked the last AP of Weaponry. But he had both by 1983 at the latest.

Conditional Soaking and Damage Capacity to avoid weirdness due to the differential between his Reflection/Deflection (24 APs) and his BODY (5 APs). RAPs in the 20s tend to come in large quantities. And both Peter Parker and Jennifer Walters noted that Krylenko was surprisingly tough.