I’m uncertain of her relationship, if any, to the original Citizen V (John Watkins). She claimed to be his grandchild, but her successor John Watkins III makes the same claim.

In Captain America Annual 1998 it’s stated that after the first Citizen V’s death, Paulette Brazee (She-Wolf) had his child, and then remarried. Her husband is shown with red hair, so it was possibly to imply, when her identity became known, that Dallas was not actually the grandchild of the original Citizen V.

I’ve left them off her known relatives section unless this is cleared up.

As Vantage, Dallas has heightened reflexes and strength. This is due to energies remaining from her merger with Atlas, which went to her after they split, and if he decides to he can draw them back into himself, leaving her in her crippled state. She is often armed with a pistol and a sword or baton.

Dallas was a highly trained acrobat and combatant, a marksman with firearms, and an extremely accomplished swordswoman. These abilities were diminished when her legs were paralyzed. She is also a trained detective, talented at stealthy infiltration, and a skilled artist.

Allegedly the granddaughter of the original Citizen V, Dallas was unaware of the fact. But her father insisted on training her to uphold the family tradition, so that by the time she joined the police force, she was already an accomplished fighter and marksman.

She later left the police force, and became an aide to the mayor of New York. When the Thunderbolts became popular, she was assigned as their liaison, and became close to Atlas. When their true identities, as the Masters of Evil, were exposed, Dallas was devastated. She was then used as a scapegoat for the administrations connections to the Thunderbolts.

Soon after, she was contacted by the V-Battalion, who revealed her family history, and recruited her as the new Citizen V. She initially posed as a man, using padding under her costume. She began hunting down Baron Zemo, and tracked him and Techno to a castle in Mexico, which she infiltrated undetected.

After a few days of observing them, she struck. Quickly rendering Techno unconscious, and engaged Zemo in combat, but he managed to escape. Following his trail to South America, she helped the local tribesmen he had enslaved resist his forces. She was joined in this by Captain America, and they foiled Zemo’s plot, but he again escaped.

Refocusing her attentions on capturing the Thunderbolts, she came into conflict with Hawkeye. Her single-mindedness led her to try and stop them while they were saving civilians from a plot by the new Masters of Evil.

Chastened by the meeting, she began investigating the events and was captured by the Crimson Cowl. When the Thunderbolts defeated the Masters of Evil, they captured and unmasked the Cowl, revealing Dallas. 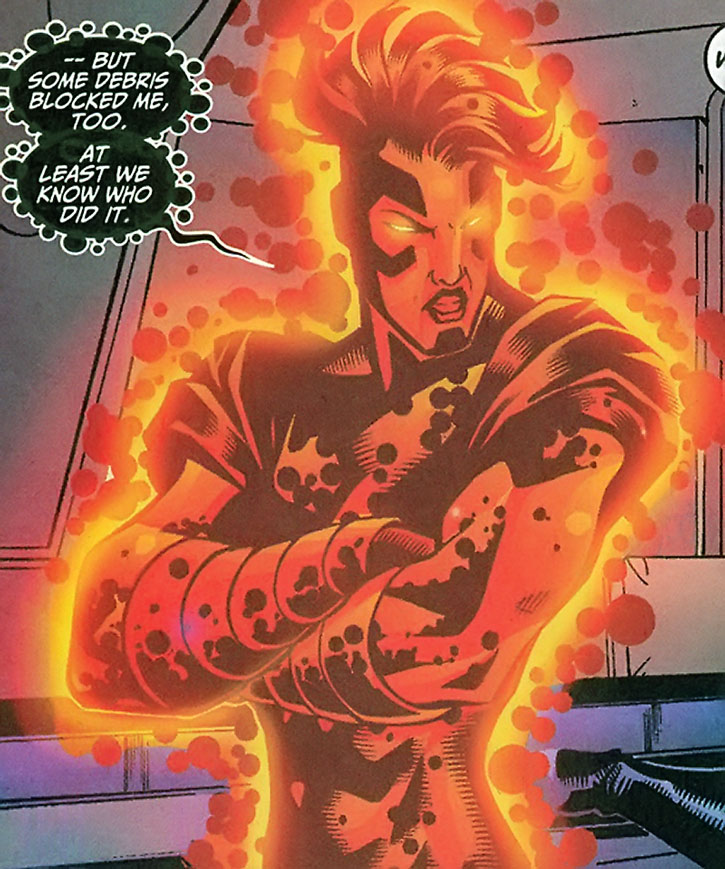 She was sent to prison for the Cowl’s crimes, but was broken out by the V-Battalion. She resumed her role as Citizen V, but when her superiors ordered her to kill Henry Gyrich, giving her no reason why she should assassinate a government agent, she rebelled.

Fleeing to the Thunderbolts for help, she started a battle between the two groups, and was suddenly abducted during the melee when the Crimson Cowls cloak appeared and teleported her away.

She eventually managed to escape the prison Crimson Cowl kept her in, and confronted the Cowl, even unmasking her, but during the fight she fell a long way into a river. She washed up in Latveria, where she was taken to hospital, but the damage she took in the fall was too extensive, and her legs were paralyzed.

Shortly after returning to America, she was visited briefly by Atlas, whose body had been dispersed into ionic  energy. The two soon merged, allowing Dallas to transform into a being of ionic energy, which was controlled by Josten’s mind. The pair helped the Thunderbolts battle Graviton, and ended up stranded, with most of the team, on Counter-Earth .

While travelling across Counter-Earth, planning to hijack a space shuttle to get back to their Earth, the Thunderbolts realised how desperate the situation was, and helped out where they could.

When they discovered the shuttle flight was actually being used for a less than noble purpose by this worlds Thunderbolts, they stopped it and revealed its true purpose, controlling communications worldwide, overthrowing the other Thunderbolts (and Zemo gaining habitation in the body of his counterpart from Counter-Earth).

Deciding to do what they could to help the people of Counter-Earth, they discovered the city of Attilan, and turned it into a flying city, on which they gathered refugees from the worst hit parts of the planet. When disaster threatened the planet, the Thunderbolts teamed up with the Young Allies to try and prevent it, and succeeded.

All the Thunderbolts, except Jolt were transported back to Earth. As a result of exposure to the energies of the event, Dallas and Erik were separated, and Dallas retained the ionic energies, giving her powers. She assumed the name Vantage.

Up where we belong

She remained with the Thunderbolts to keep an eye on Zemo, and so she could be close to Erik. She went along with Zemos plan to remove the world’s transnormal energies, but this brought the team into conflict with the Avengers, and they were disbanded soon after. Dallas accepted an offer from Warbird to work for Homeland Security.

Soon after Erik Josten became enraged and restored his powers, which drained the ionic energies from Dallas, removing her powers. She continues to work for the Commission on Superhuman Activity.

Dallas is a detective, and usually approaches situations rationally and calmly. When she first became Citizen V, Riordan was consumed by the need to bring Zemo and the Thunderbolts to justice, and would be oblivious to all other considerations.

Her anger eventually cooled enough that she could see that some of the Thunderbolts were trying to repent, but her police mindset kept her from fully trusting them, in particular Zemo. While she did have a growing relationship with Erik, they have not talked since he recovered his powers.

Inserting the legacy of a World War II mystery man shouldn’t cause too many ripples. She would have been the Mayor’s liaison with the Titans at the time when Councilwoman Elizabeth Alderman was turning the public against them, and Dallas became a political scapegoat for the Mayor’s apparent closeness to the group.

When she took on the role of Citizen V, she focused her hatred on the Titans and Deathstroke.

As Citizen V, Dallas had DEX, and linked Acrobatics and Thief, at 07 APs, had the V-Battalion as a high-level connection (initially, at least), didn’t have the SPR, but had an MIH of the Thunderbolts, and a SIH of Baron Zemo. She had 30 HPs during this period.

She was in constant radio communications with the V-Battalion, who had specialists in a number of areas available to her, effectively giving her Omni-Scholar.

She also used the following gear:

When merged with Atlas she had the same Alter Ego as Vantage. Josten’s Mental and Mystical stats were in control of the merged being, which had DEX 05, STR 09, BODY 09, Growth: 09 and Flight: 06. She had 35 HPs during this period. 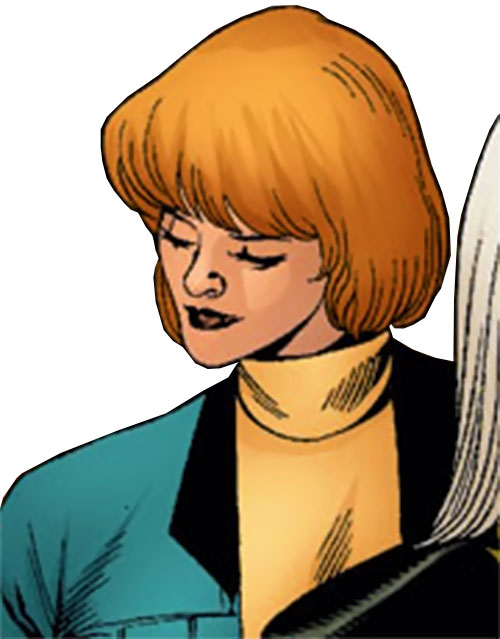 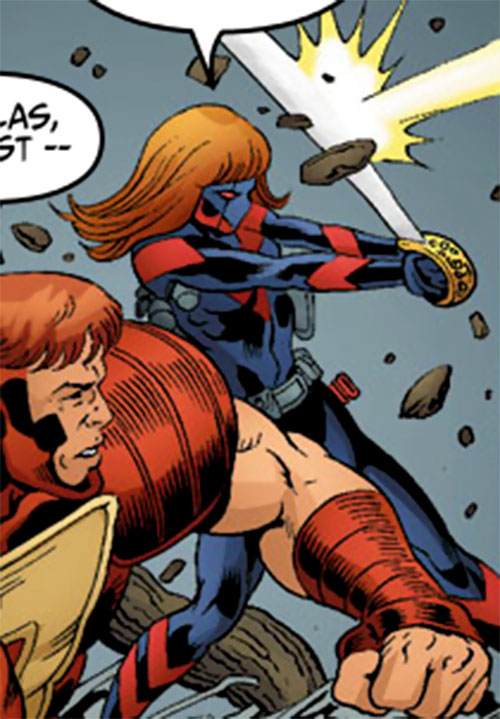 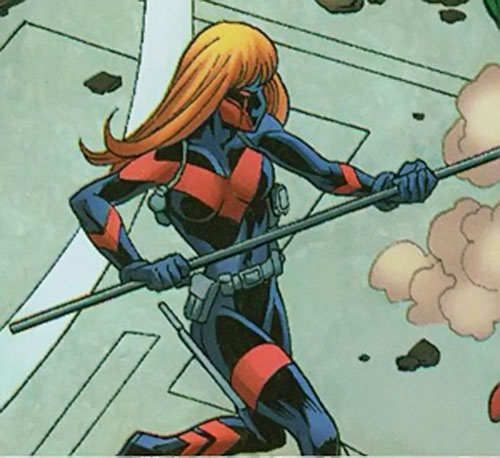 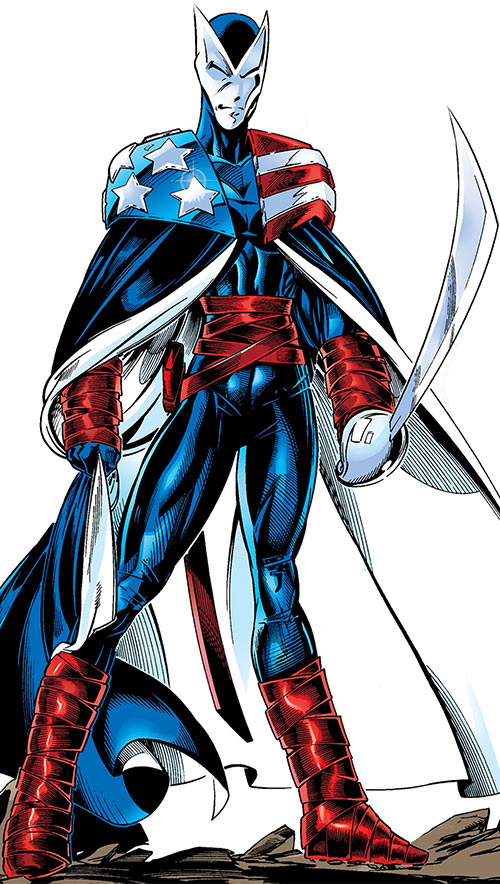 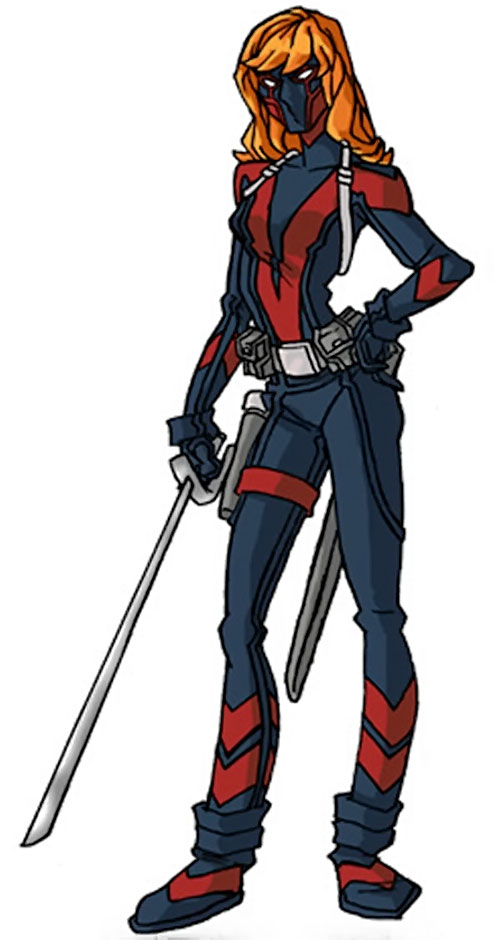 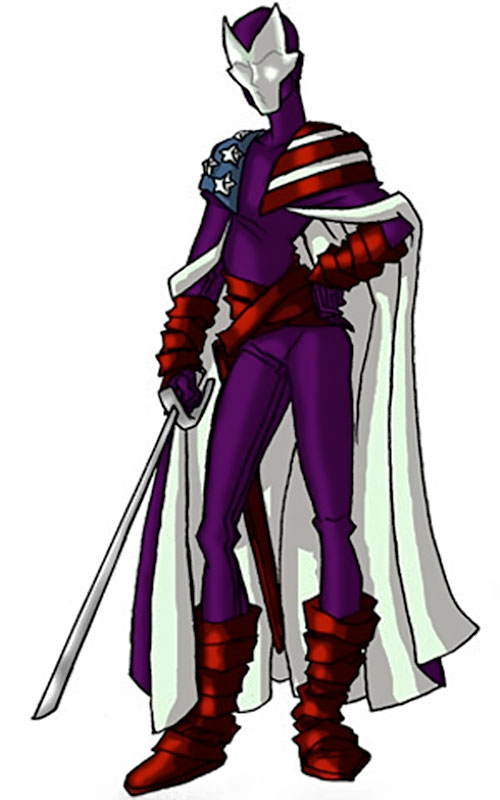