Varnae was a sorcerer in Ancient Atlantis. His mates at the Darkholders cult used the Darkhold to turn him into Earth’s first vampire. Varnae killed the cultists when they tried to use him against King Kull, and became Vampire Lord.

(For more about the Tome of Darkhold, see our profiles for Modred the Mystic).

Atlantis sinking was not the end for Varnae. He entered hibernation for some thousands of years. The Vampire Lord awoke in the Hyborian Age and fought the likes of Conan the Barbarian, Red Sonja and Zula — until the latter’ magic forced him to retreat.

Millenia later, in ancient Sumeria, the sorceress Aamshed helped Varnae craft a magic spell that could greatly enhance vampiric powers. However Aamshed tricked Varnae, as she ensured that the spell could only be cast every 2,000 years on a vampire’s home soil… a soil long since gone in Varnae’s case.

The Lord of Vampires used his powers to raise Atlantis from the ocean as the Christian era began, but again Aamshed foiled his plans.

As the centuries passed, Varnae got tired and sired Dracula (Vlad Tepes) as the new Lord of Vampires – after making him fight Nimrod to test him. Varnae then committed suicide by walking into the dawn.

Skip to our days. Voodoo priestess Marie Laveau needed vampiric blood to concoct a draught of the potion that suspended her ageing. Thus, she used the Darkhold book to counter Doctor Strange’s Montesi Formula (that had destroyed every vampire on Earth and prevented their further creation) and resurrect the Lord of Vampires.

However, while she expected Dracula, it was Varnae who returned.

Imagine a hybrid of the archetypal “Nosferatu” and André the Giant. Varnae is 10 feet tall and grotesque, with bright pink flesh, a hunch, sores, and horribly distorted features.

Varnae is in many ways exactly as folks would imagine the archetypal vampire to be. After millennia of activity, he is confident in his own might. He has few vampiric equals, with possibly only Dracula in his range. His schemes are well planned, and despite being hungry for power, he still knows when to cut his losses. Age and experience have probably taught him patience.

Varnae has a relatively cool demeanor, which is befitting the immortal leader of all vampires.

He expects his minions to obey his every whim, but he rarely directly abuses other vampires. He will usually carry out his own plans, and mostly uses non-vampires as tools to accomplish his grand goals. After all, humans are inferior beings to be used by vampirehood as they please.

Varnae’s reputation and power is further amplified by his mystic knowledge and his knowledge and experience of history. People and vampires know that Varnae is not to be taken lightly and, in the case of vampires, heed his wishes since Varnae probably knows best.

“Thirsty for vengeance, some of these in time managed to attain Chthon’s parchments… and muttered his hellish incantations over one of their own number who lay dying of wounds received in Kull’s war with the wizards. Three nights later, they unearthed his great stone sarcophagus of blood… and I, Varnae, came forth again into the world of the waking.”

“… and what BETTER place for it to go to die, woman, than AT ITS MASTER’s FEET ?”

I’m planning to use him in a slightly altered version of the Pre-Crisis 30th Century DC Universe. Varnae was still the first vampire and was still a pre-Cataclysmic Atlantean sorcerer, having run-ins (both pre and post transformation) with Arion.

In my version of the 30th Century (inspired by ideas from Writeups.org contributor Chris Cottingham), I’m using Mordru’s minion Vrykos as a 30th century Lord of the Vampires…an intergalactic Dracula…hand chosen by Varnae as his successor.

In his prime, Varnae had the following Physical Stats a Dex of 06, a Str of 10, a Body of 13 and Mystic Entity Connection: Chthon (Low).

When possessing the vampire known as “Night Terror” Varnae may also have had access to Mind Probe: 10, and *perhaps* Mimic (skills only): 12. Both powers are Contingent on Vampirism and requiring Vampirism to be used immediately before using either of them.

“Can Turn Humans Into Vampires” 150 points Misc. Advantage:
Anyone who is killed by Varnae’s bite (i.e. reduced to Negative BODY APs of Current BODY through the use of Vampirism) will become a vampire. After two to three days (the exact timing is unknown), the subject will arise as a goon. (…)

Newly changed characters will retain all previous HPs, Powers, Skills and other stats except for whatever exceptions are deemed appropriate by the GM. Note that goons will be very restricted in this regard while more advanced vampires should retain most if not all of their previous abilities”. 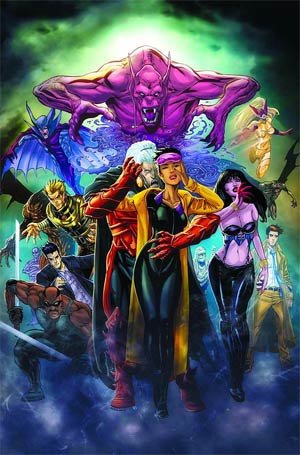 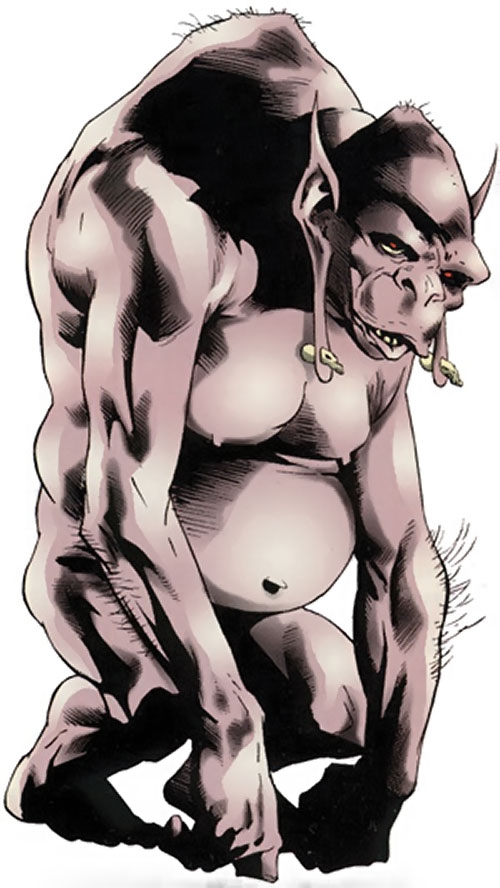 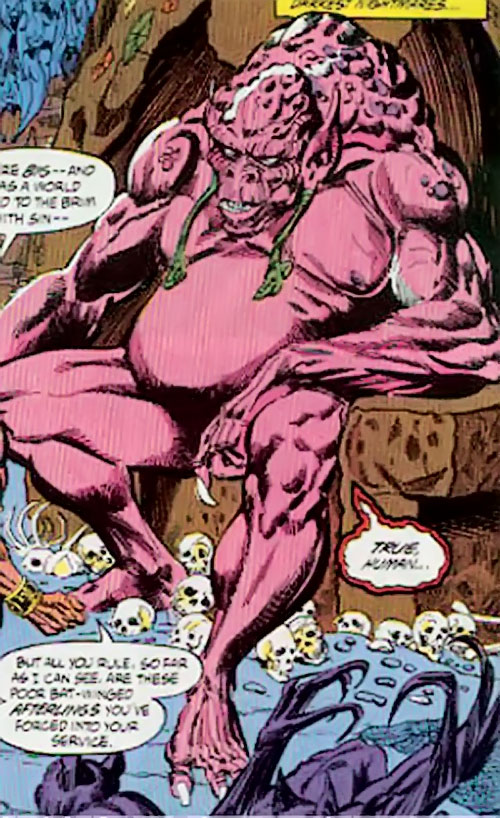 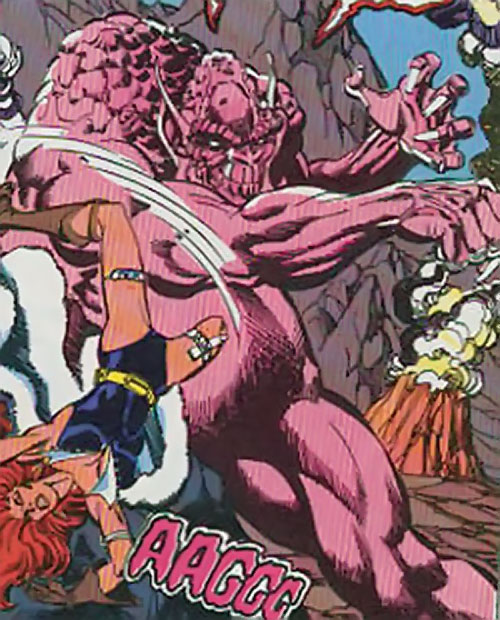