Most mysteries involved schemes by greedy or intolerant individuals posing as monsters or faking other supernatural phenomena. Although Velma and the gang (usually referred to as “those pesky kids”) were almost able to solve the mystery, there were a few phenomena that simply could not be explained away.

As the gang grew older, they went their separate ways. Velma was the only one of the group to finish college, majoring in Criminology at Columbia with minors in Electrical Engineering and Computer Science. While she was still in college, she started her own successful company designing high-tech detective gear and licensing the technology.

The old gang had kept in touch. Thus, when Daphne mysteriously vanished, Velma, Fred and Shaggy set out to find what happened. After rescuing Daphne and exposing the cult that had kidnapped her, they realized that they missed working together as a team. Velma provides most of the high-tech equipment used by the gang and bankrolled the new Mystery Machine.

Velma still develops high-tech detective and police gear and is comfortably well-off. She can usually cobble together anything the gang could want in the course of a mission.

Velma, despite much effort, still has not lost all of her baby fat. She is a short woman with close-cropped brown hair. Fortunately, she no longer sports the brown miniskirts she used to wear and favors sweaters and baggy jeans. She is very nearsighted and must wear glasses.

Pretty much unchanged. The Scooby-Doo gang is an accepted (if sometimes mistrusted) part of DC’s mystic community. They are often called in by other (non-supernatural) heroes when the occult is involved, and the mystic heavy-hitters are unavailable (or part of the problem).

Velma has licensed much of her technology to STAR Labs, but has rebuffed offers of employment. 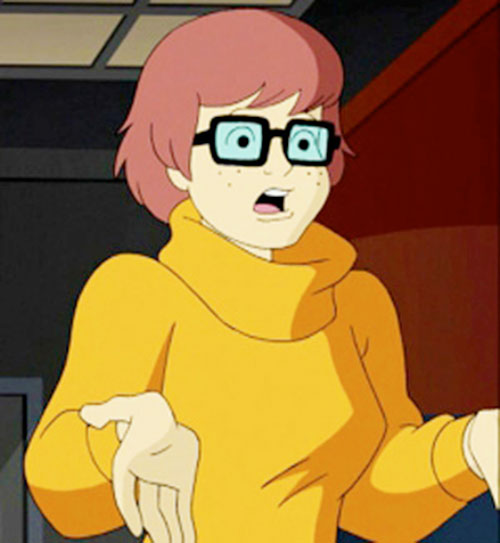