Our Cyberforce profiles are quite old, and usually based on my small collection of books. They are in no small part adaptations of the Top Cow sourcebooks for the setting.

Velocity is a mutant whose body and brain have been enhanced to allow her to run at extremely high speeds.

A cybernetic chip in her head allow her to navigate and manoeuvre at high speeds.

Her skin is toughened with Kevlar in order to prevent friction damage when running, which also makes her resilient to impacts.

Velocity’s origin is unclear. This is largely because she lacks most of her pre-enhancement memories.

Since she’s now known to be Ballistic’s sister, it could be theorized that she’s a gamma 2 Reinbeck mutant (for details on Reinbeck mutants, see Stryker’s profile). However, she hasn’t demonstrated the natural accuracy of a gamma 2. It is thus more reasonable to postulate that she is a special strain of Reinbeck mutant. Perhaps gamma 5 ?

Carin was born to an abusive family, and harassed because of her peculiar looks. But her mutant abilities surfaced early. So instead of constantly wishing that she could run away from it all, she actually could do it.

She ran from all foster families and institutions she was committed to. She always managed to run away until Cyberdata got her.

The nefarious corporation was interested in using the tween. Carin could join their death squads, the SHOCs (Special Hazardous Operations Cyborgs). They started the necessary medical and cybernetic procedures. But at that point, a Cyberdata researcher broke the cybernetic and mental conditioning of a small group of SHOC.

He fled the evil corporation along with them. These people would become the super-heroic Cyberforce. They fought against Cyberdata to atone for the terrible evil they had done while brainwashed.

Carin managed to flee from Cyberdata and join them in their early days. She escaped in time to avoid receiving SHOC conditioning.

Carin’s skin is ivory-white. She also has a strange, pine green birthmark in the shape of a thunderbolt over her right eye. Her red hair goes to her shoulders.

Her Velocity costume is skintight pine green Spandex with dull orange trim in the shape of zig-zags and thunderbolts.

Velocity is about 13. She’s a nice but scared and soft-hearted kid thrust into a very dangerous situation. Cyberforce is her only family, even if they frighten her a bit.

She’s afraid of her own fears, and lacks confidence and assertiveness. She’s also too caught up in her own problems to notice that other people have their own issues and lives.

However, she’s gradually managing to gain self-confidence. As her tween angst recedes she may become a competent fighter and more assertive teenager.

Replace Cyberdata with Lexcorp, and here you go ! The SHOC become variations on the Team Luthor theme, and the Kraken (for those of you who read Cyberforce) would have been a master weapon intended against Superman.

The Cyberdata mess in the last few months of 1996 would be replaced by the seeming death of Luthor and the appearance of Luthor II, so you ’ll have to position Cyberforce in the early 90s.

In the DCU, Carin does not know how to use the Speed Force yet. But there is no reason a DCU Velocity could not develop into a full Speed Force character later on.

Bonuses and Limitations:
Velocity does not have enough combat skill to substitute her Superspeed for her AV or EV, unless she uses a big enough object as a weapon (-1).

Velocity is not an experienced combatant and lacks high speed attacks, apart from a Slam. One power stunt she can use is to wield a large object to gain Accuracy or Strength-based Damage. 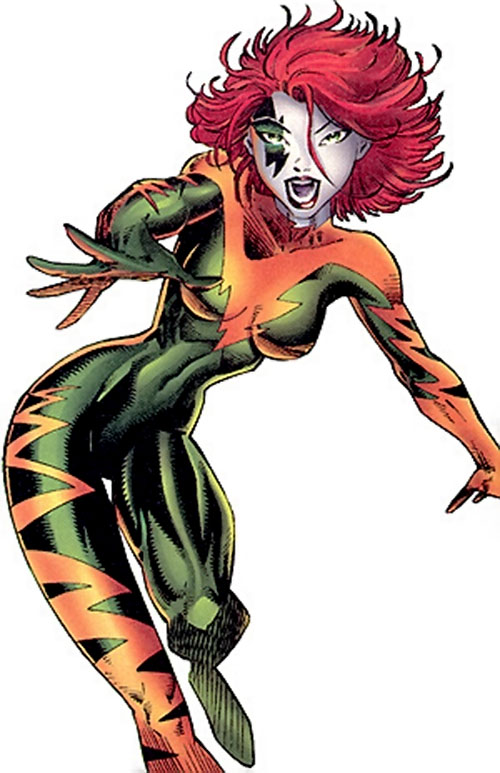