Velvet is an Image Comics series by Ed Brubaker and Steve Epting, an espionage story set at the height of the Cold War in 1973. What if Moneypenny was a better spy than Bond?

There are SPOILERS for the recently-as-of-this-writing ended first series. I tried to keep as much as I could out of the initial part of the History, with most of what occurs in the series under the sub-headered sections.

Velvet is a highly trained armed and unarmed combatant, able to hold her own against the best.

She prefers to end fights fast. She also uses her unthreatening appearance to get close enough to put opponents down before they’re a problem.

An experienced spy, she’s trained in all kinds of espionage, tradecraft, and the use of drugs.

Even semi-retirement hasn’t dulled her edge to any real degree.

She has a near photographic memory. She’s also supposed to be a skilled linguist, though the only language explicitly shown is French.

On the run, she usually wears a prototype stealthsuit stolen from ARC-7 (unless her cover requires showing too much skin to use it). Composed of synthetic microfibers, the suit is impact resistant. It makes her virtually bulletproof, although the force of the impact can still stun her. It also has flaps between the arms and the torso that allow the wearer to glide. 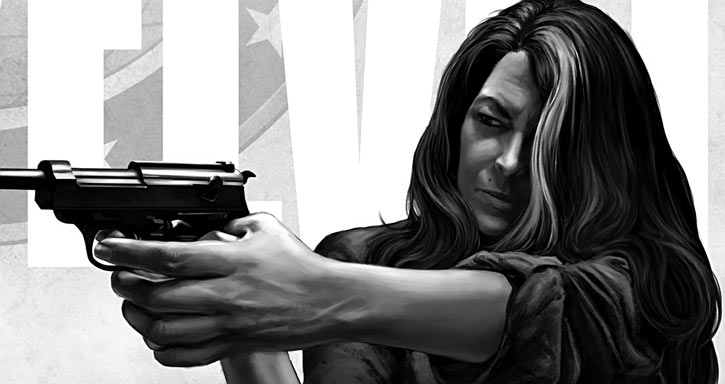 While the suit took some getting used to, and her first landing could have been better, Velvet became skilled in its use. In flight she can catch up to a speeding car, grab a gunman hanging out the window, toss him out, then reach in to send the car off the road, rolling free of the impact and walking away from the crash.

She may have access to other spy tech – such as knockout lipstick that puts anyone she kisses to sleep – and can readily get hold of guns.

Born around 1930, Velvet Templeton grew up in New York, though her father travelled a lot on business. Her mother died when she was in her teens, and Velvet left the US.

Her father arranged for her to attend a Swiss boarding school. Velvet was happy to do so, having encountered the head of the school, Lady Pauline, while sneaking peeks at her father’s top secret files. Pauline had been a wartime spy deep behind enemy lines, and Velvet hero-worshipped her.

Lady Pauline took a personal hand in her training, arranging Velvet’s recruitment into ARC-7. ARC-7 grew out of the wartime Allied Espionage Group. It was so top secret that most of the intelligence community were unaware of its existence.

Velvet – given the codename Valentine – soon became one of the agency’s best operatives. She had an early crush on their top agent, Frank Lancaster, and he took her under his wing. She spent the late 1940s and early 1950s travelling the world on ARC-7 missions, building a reputation only a few would ever know.

She fell in love with fellow agent, Richard Donovan – codename Mockingbird – and they married in 1956. They had a few attempts at a honeymoon, which were always interrupted by work.

During their final one, Richard began acting suspicious. Velvet spied on him, but was still shocked when told he’d been compromised. Their confrontation became a fight, and ended with her hurling him out a window to his death.

Her return to work may have been a bit soon. After a mission with Lancaster, their local asset made an inappropriate joke about Mockingbird. Velvet beat him to death before Lancaster could pull her away. Unable to face field work, Velvet accepted Director Manning’s offer to become his secretary.

Before the Living End

Velvet was content as Manning’s secretary, few in the agency aware of who she’d been. She had casual relationships with some of their X agents – the Men Who Don’t Exist, their top field agents. She’d grown fond of X-14, Jefferson Keller, before his murder in 1973.

Velvet observed the investigation into his death while scanning the reports for what Manning needed to see. Frustrated that they seemed to be getting nowhere, she dug through his recent missions. 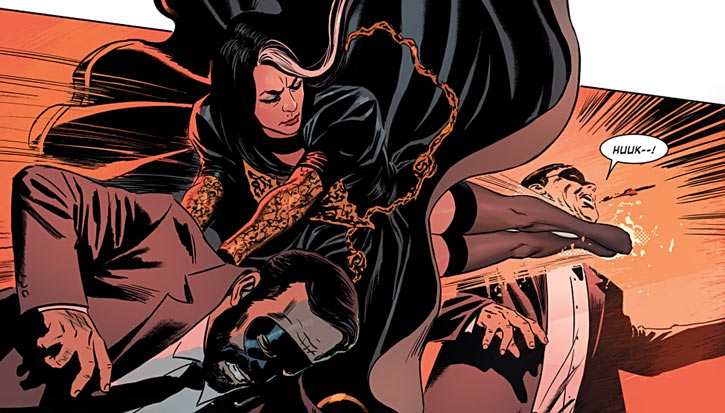 She refused to believe evidence that identified the retired Frank Lancaster as Keller’s killer. While the agency conducted a manhunt, Velvet checked a safehouse Lancaster had shared with her. She found him dead, seconds before an ARC-7 team burst in.

Since they were unaware of her history, she took down half of them before they could secure her. Using the prototype stealthsuit she’d borrowed for the evening’s excursion, she escaped their cordon.

On the run, she continued investigating Keller’s missions to find out what was going on. She contacted Burke, an old smuggler she knew. He got her out of Britain, and helped her investigate Keller’s last mission. It revealed little concrete beyond his contact with a former Russian agent called Roman.

Velvet saved Roman from Russian agents who’d been fed his location. He revealed Mockingbird had never been a Russian asset, and Velvet realised there was a mole within ARC-7.

The Secret Lives of Dead Men

Covertly returning to London, Velvet kidnapped Manning. She then used him as a distraction to infiltrate the ARC-7 building. Once inside, she used his secure line to order a prisoner transfer from their secure facility.

She’d narrowed the list of possible moles to four men who’d been with the agency in its earliest days. Another person from the early days was Damian Lake. He’d reputedly gone insane after his French office was attacked, its staff slaughtered. While she didn’t fully believe that version, his incarceration since meant he had no hand in recent events. 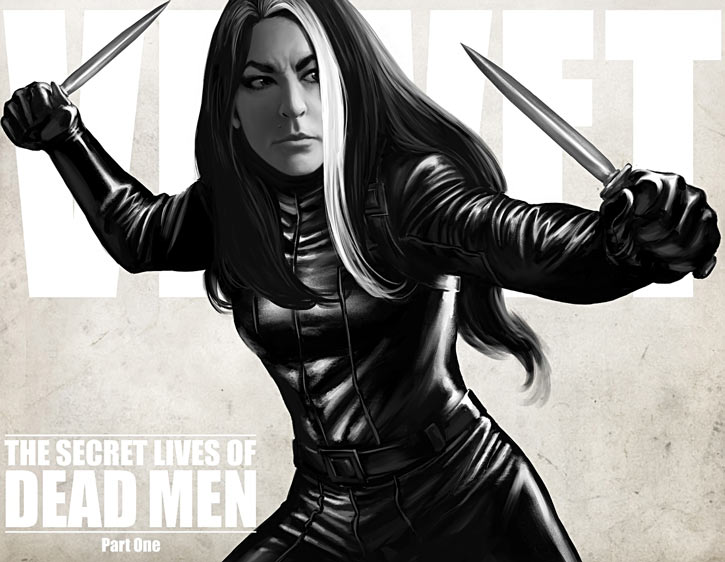 Velvet ambushed the transport carrying Lake, and freed him. Lake admitted to a covert investigation that had led him into the trouble. He’d discovered a front organisation named Titanic Holdings, which Mockingbird had also noticed. The company founder was Pierre Duprey, a cover ID from the agency’s earliest days. All record of the ID was missing, and it was after searching for it that his office was attacked.

He refused to tell her who Duprey had been unless she took him with her, not wanting to return to prison. Her time out on her own had left Velvet lonely, so she was too trusting with someone she saw as a victim of a common enemy.

He disappeared on a train through the French countryside. Just before the local authorities tried to arrest her. Velvet evaded them, but was captured by the agency’s head of Paris branch, Jean Bellanger – one of her suspects.

She realised Lake hadn’t used her as a distraction, but as bait to draw out Bellanger. He executed Bellanger, but let Velvet live. Soon after, he also shot Manning.

The Man Who Stole the World, part 1

Velvet disappeared for a few months in Paris. Dyeing her hair grey, she got a secretarial job in the financial sector so she could investigate Titanic Holdings. Having learned all she could, she seduced an accountant from a related firm and had him fly her to America in his private jet.

She bailed out over New York. In the cabin full of unconscious men, she left evidence drawing attention to Titanic Holdings. She made contact with fellow spy, Maximillion Dark, who agreed to help. She didn’t trust him, and knew he was reporting her movements back to someone. 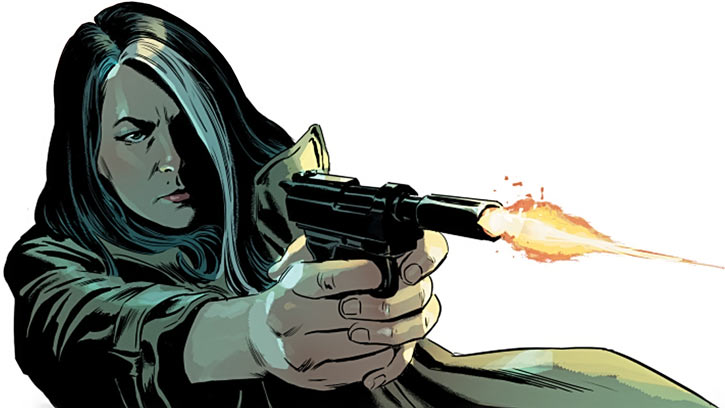 Tracking a discrepancy in Keller’s last US mission, she learned he’d followed a target to the Watergate Hotel on the night of the break in. Another encounter with Lake left her confused, and Dark dead at Lake’s hand because she believed they’d been working together.

Velvet made contact with the vice-president. Using old blackmail material the agency had on him, she had him drug President Nixon’s drink. This let her abduct him from a bathroom under the nose of the Secret Service. He confirmed her suspicions, and she left him to be found by his security.

The Man Who Stole the World, part 2

Her escape wasn’t clean, as Colt, agent X-33, had been on her trail and got the drop on her. Suspicious of her actions, which didn’t match her alleged crimes, he let her tell him what she knew. Convinced she was telling the truth, he helped fake her death, implicating Lake. They faked her burnt corpse, which he took back to Manning – who’d survived the shooting but continued the pretence of being dead.

It was a few months before she followed Manning to a meeting with Lake. She shot Lake before he knew she was there and confronted Manning. He admitted:

She knew they’d let her find out about the President to show what they were capable of. And that Lake – recruited into the conspiracy – had let her live while leading her on an audition. She had no interest in joining them though. She shot Manning dead, and left him, Lake, and their files, for ARC-7 to find while she disappeared.

An attractive woman in her 40s, Velvet has a white streak running through her otherwise black hair, to the left side of her face.

Composed under pressure, and always thinking, once Velvet gets back into the swing of life in the field she has multiple layers of plan going at once, every move being at least two moves. Once she gets back into it, and has to adapt to the deviousness of her enemy. Initially she’s more direct in her moves, but, being quick at improvising, manages to stay free. 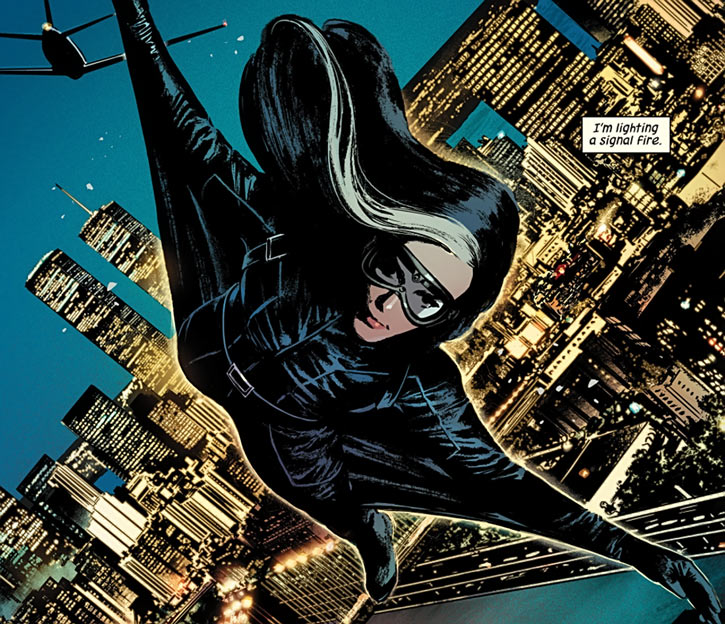 While she doesn’t like certain parts of her trade, Velvet can force herself to be ruthlessly pragmatic, using people to achieve her mission goals. This was one of the hardest parts to get back into after her semi-retirement, along with dealing with the loneliness of being on the run.

She quickly relearns not to trust anyone, bordering on paranoia. She had reason to mistrust Max, since she knew he was informing on her. She didn’t have enough of an idea of the conspiracy’s reach though, so assumed the only way they could have found her was if Max had told them.

She’s wary of anyone outside the game, in case they’re not, and while she knows she’s being hunted will trust no one more than she absolutely has to.

“Any fight that lasts longer than five seconds is hell. I prefer the one second kind, where I’m the only one who even knows there is a fight.”

“Oh, quit your bloody whining. Try getting shot in the ribs sometime.”

Damian Lake: “Really ? Manning can’t get anything out of me, but he thinks I’ll fall for a honey trap ?”
Velvet: “I’m not sure if that’s a compliment or an insult.”
Damian Lake: “Neither am I. Can I have one of those ?”
Velvet: “No. Cigarettes are for boys who cooperate.” 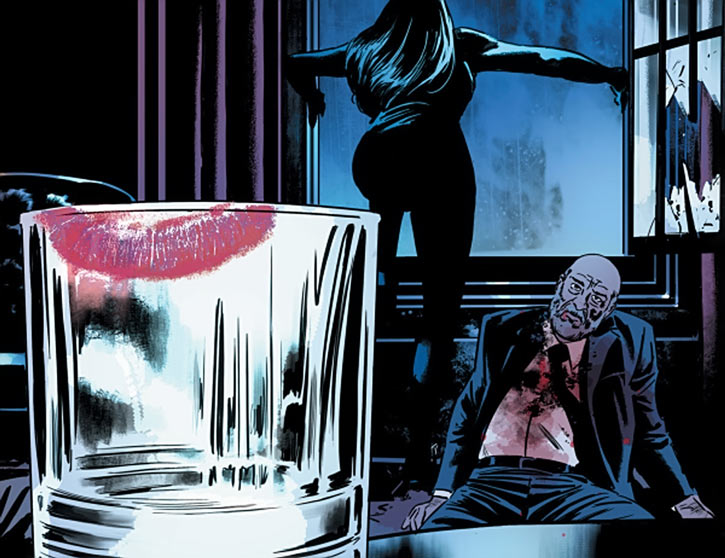 “I was trying to be nice. But you assholes made me hurt a dog, so you can fuck right off.”

“A spy tells so many lies that they can get lost inside them. So you hold onto the few real things you’ve got. Until you realise they aren’t actually that true, either.”

“You people always forget your field ops aren’t just pawns being pushed around a map. They know when they’re being lied to.”

“It’s the hubris that really galls me. You actually think you’ve got this situation in hand. You think I care about my name. Did you forget I’m already dead ?”

Bonuses and Limitations:
Recall is a Skilled Power (+1) 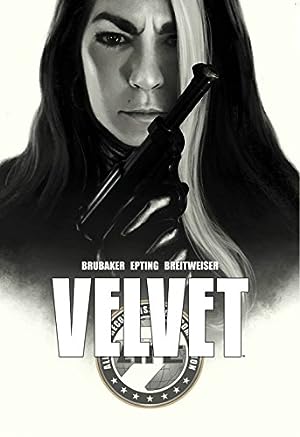 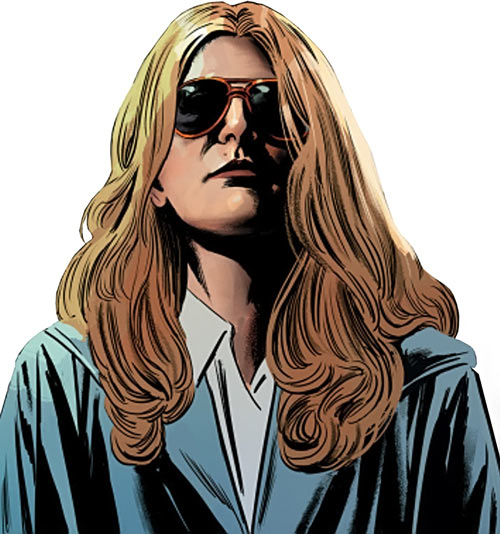 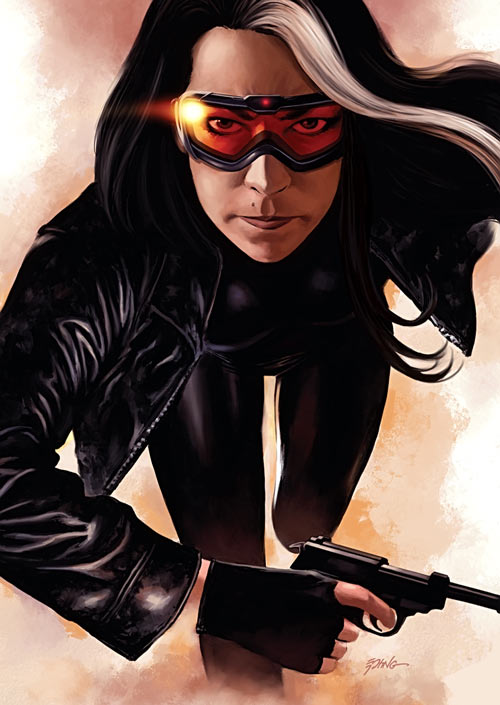 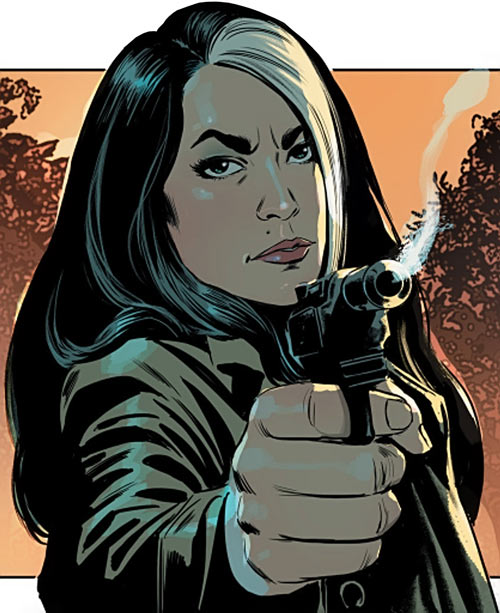