Gilbert is a fit, powerful hand-to-hand fighter, acrobat and athlete. She thought that she was on Batgirl (Barbara Gordon)’s level, but that’s clearly not the case.

She also had enough mental fortitude to partially resist The Fugue’s memory manipulations.

Also, she has tonnes of money. Most of which seems inherited.

She may have some big cat taming skills, or at least enough to know how to behave in the presence of tigers. She likes having large dangerous animals, especially big cats, backing her up.

While carrying equipment may seem difficult given how short and tight her minidress is, she has a small backpack and/or dorsal holsters (hidden under her mane of hair). And her puffy shoulder pieces seem to have pockets.

During her second appearance, Velvet Tiger also had 3+ braces of throwing knives.

During her third appearance, Gilbert was seconded by four hand-to-hand combat experts. These women seemed capable – they *might* have eventually prevailed against Batgirl and Catwoman. They also were oddly reminiscent of the helpers of the Golden Age  Cheetah.

Lani Gilbert comes from a wealthy family. She is known as a young entrepreneur and as the CEO of tech company Gilcom. However, a good chunk of her activities are unethical and/or criminal.

As a student she dated one Jeremy Degroot. She thus knew that his Master’s thesis was plagiarised, and kept back up files as blackmail material. She also badly emotionally abused him.

As we all know, tigers go after jackpots

In 2015, Gilbert decided to become the Velvet Tiger. For that she needed special weapons. And tigers.

With her allies Frankie Charles and Luke Fox, Batgirl :

Though Batgirl dominated the fight, Gilbert overcame her. She stabbed Batgirl with a tranq dart Gordon had used on a tiger.

However, Operator (Frankie Charles) intervened. She knocked Gibert out from behind, called the police and evacuated Batgirl.

Velvet Tiger was then freed and “recruited” by The Fugue (Vinton Burwell). He altered her memories so she would cooperate. During The Fugue’s big plan, Gilbert was sent under the city hall to install and defend one of his brainwashing pylons.

Black Canary (Dinah Drake Lance) unexpectedly came in and engaged Velvet Tiger. However, Gilbert had been resisting the brainwashing. During the fight, she regained her correct memories and surrendered.

She also told Batgirl’s allies where The Fugue was, to help establish that she wasn’t a willing accomplice. This was instrumental in stopping Burwell in time.

In 2017, Gilbert stole a bunch of Internet-famous pets. This seemed to be a mix of :

Velvet Tiger’s henchwomen engaged Batgirl and Catwoman. However, they disengaged when Esme threw a “grenade” into the fight. It was actually a dog’s chew toy, but in the dark nobody could tell.

I wasn’t going to include one. But as I linked to Babs Tarr’s Tumbler for illo credits I noticed an interesting playlist for the Motor Crush comic book , so I get to put on a soundtrack too. Unassailable logic.

Fitting thing on my mind – Cat Claw from The Kills, an indie/garage rock band. It was on their 2003 album Keep on your mean side. It’s a simple, high-energy, grungy tune with a slight punk character to it.

Her teeth are also oddly… predatorial, though it could be manga -style exaggeration. Or cosmetic prostheses.

Gilbert is a narcissist, a user, a bully and a sociopath. Only she matters, and everybody else is either cannon fodder or an annoyance.

She’ll cruelly kill anybody who stops being useful for her, and find ways to control and abuse the rest. If anybody fails to obey her to the letter, she’ll fly into a rage and consider murder.

She seems to really like tigers, and furry predators in general. Gilbert will become enraged if any pet big cat of hers gets harmed or taken down. However, one bets that having ferocious big cats is to make herself look cool and dangerous, not because she cares for animals.

Gilbert seems intended as a metaphor about rising inequality, and “move fast and break things” tech strategies harming those on the wrong side of this divide.

“I know a thing or two about what makes tech tick, Batgirl. Slip between the picoseconds of those little internal chronometers, and all hell can break loose.” (PAFF – Bab’s foam grenades in her utility belt explode).

“Do you know what I expect from all my employees ? *Loyalty*. Such a small, simple thing, yet apparently so hard to obtain. I put people to work, I give them opportunity, and the minute my back is turned they sink a knife deep into my spine.”

DEX 06 STR 03 BODY 04, with 5 APs of both Acrobatics and Martial Artist seem about correct from their brief appearance. Their gloves seemed to have Claws: 04.

I suspect that lowering the DEX by one and giving them tag-teaming Schticks/Advantages/whatev would work even better. But… not enough material.

During her 2017 appearance, Gilbert was physically weaker – essentially a non-combatant.

It’s not factored in since :

Or maybe the Rebirth version is different from the Nu52 version. Assuming that Batgirl of Burnside was still considered Nu52. Who knows. “Not I”, said the cat.

Writeup completed on the 3rd of December, 2018. 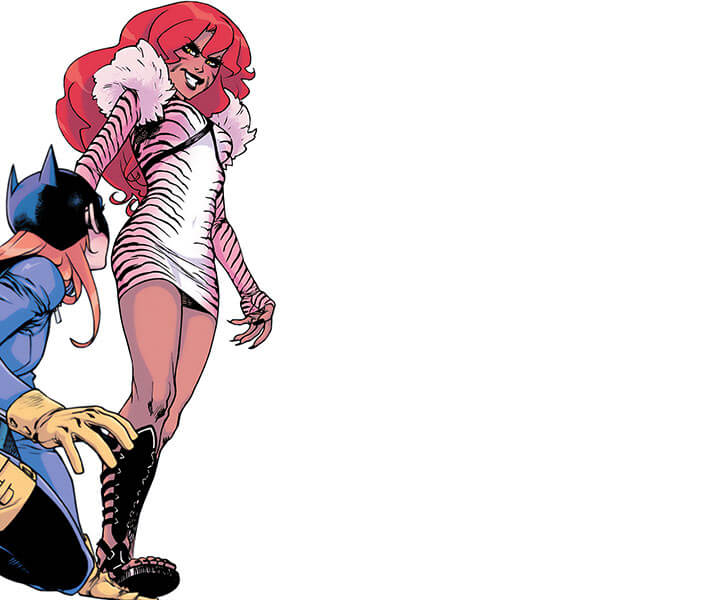 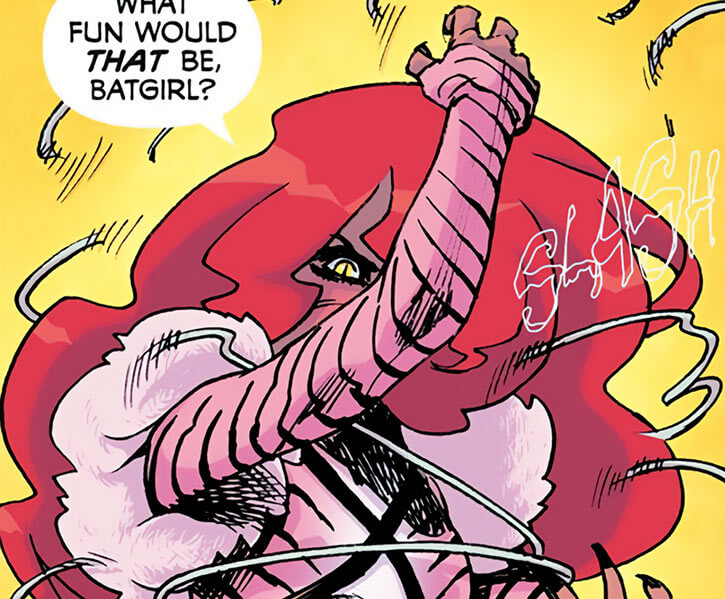