Vengeance Moth is smarter than the average owlbear. She has good practical intelligence, and good collaboration-and-care people skills.

Like all Movement members, she carries a cheap smartphone. She also has a tablet or a phablet when working on the go. She seems to be a power user with computers, but she’s not really a tech-head. It’s just that computers are convenient tools for many wheelchair users.

Though she doesn’t like violence, she’ll fight courageously to defend others.

The moth with the most

Her powers seem telekinetic in nature. She can wrap herself in a glowing, green energy field she shapes like a moth silhouette. The demonstrated uses of this energy are :

This energy manipulation is vaguely reminiscent of that used by Armor (Ichiki Hisako).

MD  is a general term for genetic conditions that severely affect muscles. In Ven’s case, it primarily attacks her legs, and had a gradual onset.

Some years before the story started she could still make do with crutches. But by the time she joined the Movement, she had to use a wheelchair. Early on, this presumably was because degrading muscles meant a risk of sudden falls.

Beyond these observed effects, it’s hard to offer a general view. The myodegenerative conditions all are different, there are a lot of muscle groups in the human body, and all patients are different.

Ven might have an exercise regimen to delay degeneration, swelling tissues, cramping issues, joint pains, breathing difficulties… Or these might be absent.

In many cases, a severe inborn condition such as MD results in additional health issues, piling up handicaps upon an individual. Frex, as a kid, Vengeance Moth was afflicted with nightmares where her weak legs left her unable to escape and she was buried alive.

Ven received psychiatric care, lessening the symptoms. For instance, she can operate in the Movement’s underground complex without genuine anxiety. However, if it looks like she’s actually going to be buried, she’ll be incapacitated by a phobic reaction, like Storm (Ororo Munroe).

Moth mentioned being a recovering substance addict, without further precision. The two more likely possibilities are :

Ven did not evidence the long-term damage of, say, Xanax or Oxycontin abuse. So her addiction likely was treated quickly and efficiently.

Vengeance Moth never talked about her past. She doesn’t like her real name, and prefers to go with her code name. Since it’s a mouthful, her friends usually call her “Ven”. One gets the impression that she comes from a middle-class or affluent background. 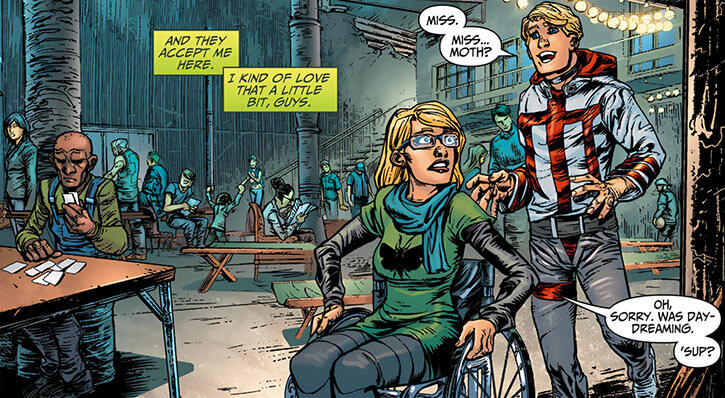 Movement leader Virtue once called her “Moth-chan”. So it is possible that the “Vengeance Moth” moniker was inspired by animé  or manga . But for all we know Fisher meant it as a Green Hornet reference, and the “chan” was just a common cultural reference among teenage girls.

Ven likely is the most level-headed and practically-minded core Movement member. As such, she is the most involved in running the Movement’s community support services. Such as day care, schooling, alarms and security devices, food distribution, etc.. She seems to be Virtue’s closest friend, and admires her.

Though Vengeance Moth is fairly powerful, her conditions limits her endurance in a fight. Like an early Sunspot (Roberto da Costa), she can only take a few actions during a given skirmish. But she performed OK in a solo fight to delay the Graveyard Faction mercenaries, and was in the field on several occasions.

Ven usually wears a dull grey long-sleeved T-shirt and matching leggings. Over this is a simple green, short-sleeved mini-dress with a moth emblem on the chest. Sometimes, it looks more like a long T-shirt, a dress or a nightshirt.

She’ll normally wear nerdy glasses, and a few simple facial piercings (one or two nose rings, and a basic labret). When underground she often wears a scarf – it is likely that her body quickly loses heat.

When going in the field, she’ll have a “mask” of sorts. It is black facepaint forming a moth pattern around her eyes, on her nose and on her brow. She’ll also do her hair as twin buns on top – halfway between a “bear ears” bun style and a Minnie Mouse hairdo.

In some concept art Vengeance Moth has a body type corresponding to her inability to exercise her lower body. In the published art she has a more comic-books-traditional, fine-waisted body.

She keeps her phone and earbuds in arm holsters  – the kind usually used by joggers. A lot of products people sneer at as yuppie hipster nonsense are also useful for handicapped people.

Vengeance Moth acts in a friendly, welcoming, kind and responsible manner. She takes care of everyone, keeps a bunch of activities running and is in many ways the heart of the team.

She seems to have reinvented herself as her heroic Vengeance Moth persona, leaving her past behind and downplaying her limitations as much as she can.

Ven is highly invested in the Movement – she likes to help.

To help with her nice and friendly image, Ven has developed the reflex of always offering some food (usually fruit snack sticks) to anybody she meets. She also makes efforts to start with positive assumptions about people.

She becomes more acidic and bitter when somebody jumps to conclusions based on the fact she’s in a wheelchair. It can’t be called aggressive given her helpful and pleasant behaviour, but there seem to be bad precedents there. She also refuses to ever look weak.

Ven has a Bible in her pack-of-stuff, and is familiar enough with the text to quickly locate references. She also never curses, except perhaps under severe stress. The two are likely related.

“I may not like to fight. But my name is Vengeance Moth. And I will if I have to.”

“Because everyone in a wheelchair is automatically Stephen Hawking, right ?”

“Send all the kids to the basement. Post as many people as are willing to fight at the doorway there as a last defense. Give them clubs, knives, whatever we have. Go, Kirstin. Hurry.”

Bonuses and Limitations:
Martial Artist is a Powered Skill, and can only be used when Ven is telekinetically flying herself. It raises her Initiative to 011.

Running out of spoons

Vengeance Moth’s MD means that she enters an action scene with a sort of Ammo score. She can take four Dice Actions. Once her tank is empty, taking another Dice Action takes 2 Hero Points, the next 4, the next 8, etc.

This “Ammo” score refills at a rate of one per minute once Ven can refocus, breathe, mentally work past the pain, etc..

Using her Telekinesis to fly herself doesn’t count as a Dice Action. Which also means she can maintain it when using Dice Actions (or all Actions, for her Force Wall). But it’s still tiring and painful (Minimal Marginal), so she only uses it when in danger. In everyday circumstances, just using her wheelchair is clearly preferable.

The DEX is probably highballed in terms of Physical OV. But it makes things simpler, and if there’s trouble she’ll prolly be airborne anyway. If she gets attacked while she’s still in her wheelchair, just treat that like you’d treat any attack on a person who’s sitting, heh ?

I tried using Force Shield, but… bleh. Additive uncapped APs suck. So Force Wall it is. That’s what it’s for.

Her Hero Points are lower than they would normally be, to represent her handicaps and limited endurance. No matter how hard she tried, she ran out pretty quickly against the Graveyard Faction. 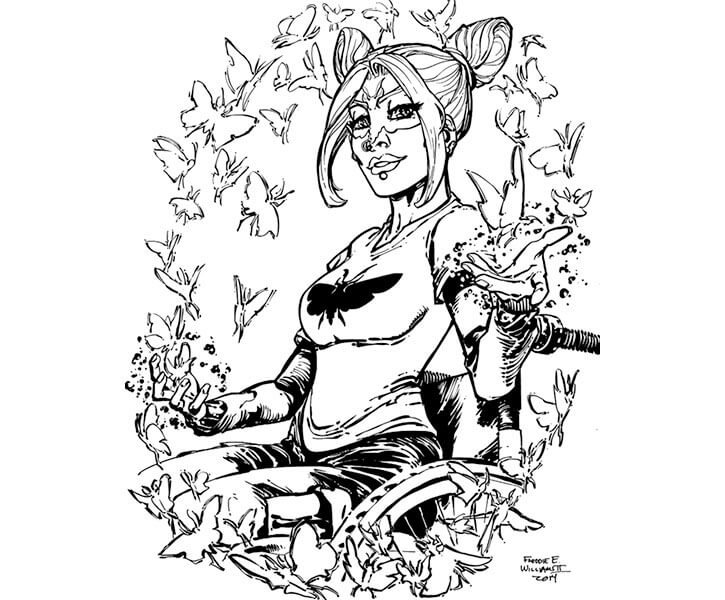 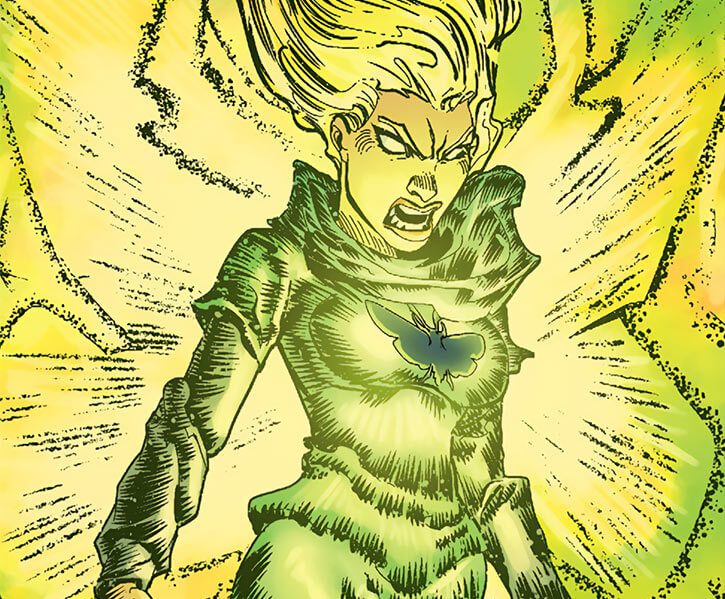 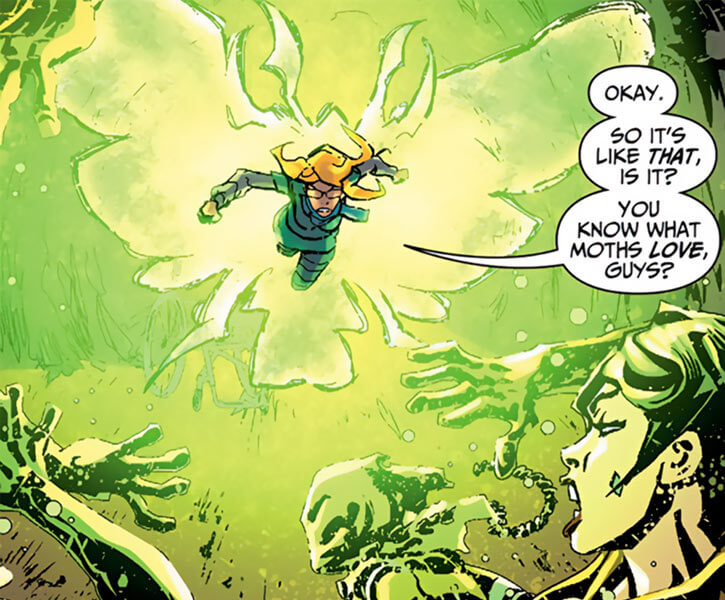 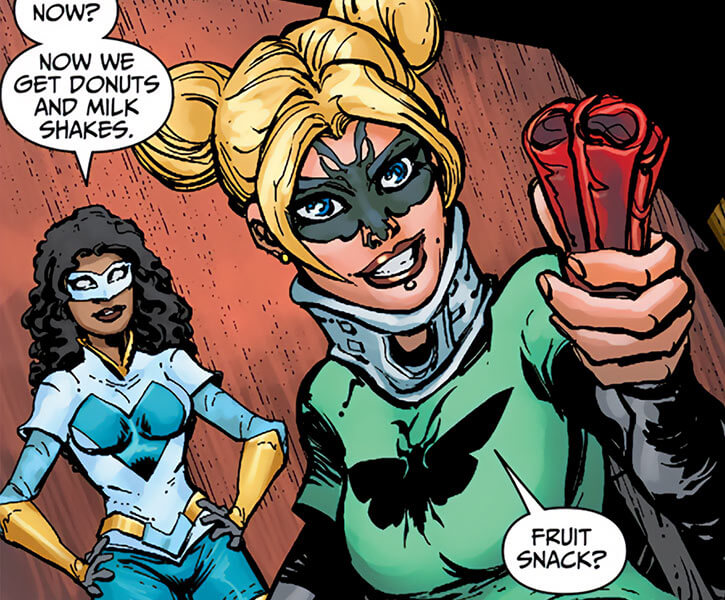