Venture possesses incredible strength. He is capable of manhandling tanks or planes with easy. He has also been seen trading blows with a gargantuan sea creature on the Santa Monica pier.

He is capable of extremely rapid flight.

Lastly, Venture can surround him self with a bright golden aura that makes him immune to harm.

Having captured photographic evidence of a mysterious superhuman living in L.A., enterprising reporter Reggie Baxter begins a relentless hunt for the man. He starts by posting his picture on the front page of a local tabloid. This catches the attention of high school teacher Joe Campbell, secretly the superhuman in question, who confronts Reggie.

Reggie wants to make Joe the subject of an expose, but Joe doesn’t want any attention. After much debate, they reach a compromise. Joe will adopt a super-hero identity, allowing him to operate in public. Reggie gets to report on his activities, and Joe retains his privacy.

Venture’s first major appearance was on the Santa Monica Pier, where he fended off the attack of a sea monster. His”partnership” with Reggie was short-lived, however, when Reggie opted not to help an innocent bystander. This forced Joe to save her, so Reggie could film the rescue. Joe severed their agreement, and flew off.

A few days latter a maniac in a robotic suit calling himself Argus went on a rampage. Having seen Joe on television he had decided that he would be the archenemy of Los Angeles’ newest super-hero. Yet he didn’t know said super-hero’s name until after he was arrested and being interviewed my Reggie.

He was a “bit annoyed” by the appearance of Celeste Noble, as she was already internationally famous, and therefore had no need to increase her visibility by interrupting his rampage.

The fight was fairly even until Venture arrived. The two heroes quickly broke Argus’ “toy” and handed he over to the police. Later Joe stopped by Reggie’s to offer him an interview. He had cooled down from their last argument and realized he needed someone he could trust to handle public relations for him.

He was also impressed by the fact that Reggie had not printed Venture’s identity,and that Reggie had decided not to print his interview with Argus since fame was all Argus had wanted from the beginning.

He failed to note as they left the room that Reggie had been preparing his story on Venture’s ID to e-mail to his boss.

Venture wears a black and white suit with a black cape fastened by two golden V’s.

In his Joe Campbell ID he has a beard and long hair.

Joe is a calm, rational man who likes his privacy. He can at times become exasperated with his students or Reggie.

He is quick to come to the aid of others, which is what finally convinced him to take Reggie’s deal. ”Think of how much more good you can do if you don’t have to worry about whether of not someone’s gonna see you.

“Just keep those heads down folks – it’s almost over. You’re going to be just fine.”

“You purposely endangered that girl JUST so you could film me saving her ?!”

Venture could easily be included in the DCU, as he has stayed out of the spot light for most his life.

It might also be interesting if he where yet another semi-immortal being in an age’s old war with Vandal Savage.

Bonuses and Limitations:
Force Field: Field Protects User Only, Can Attack Through Field. 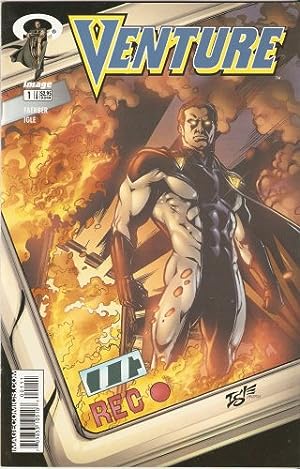 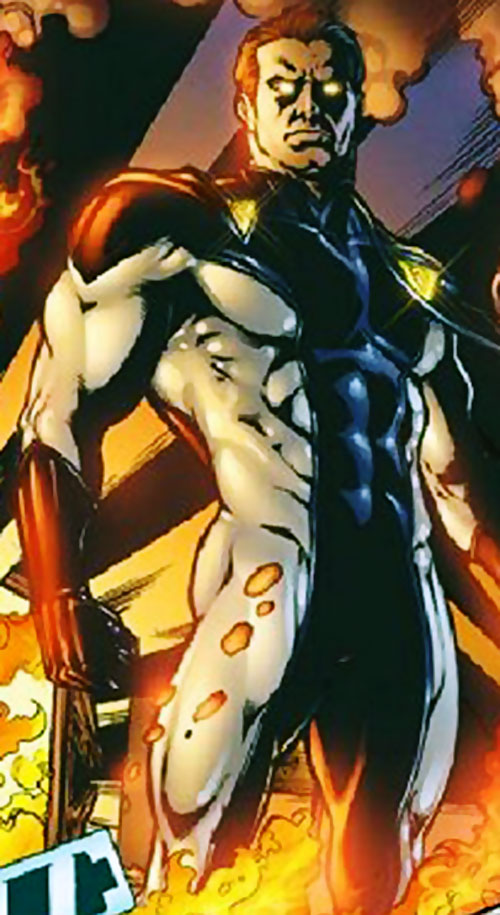 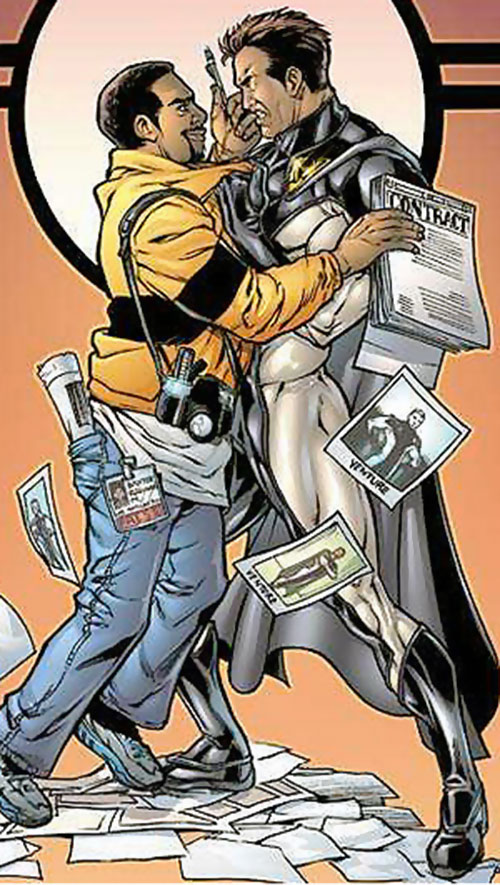 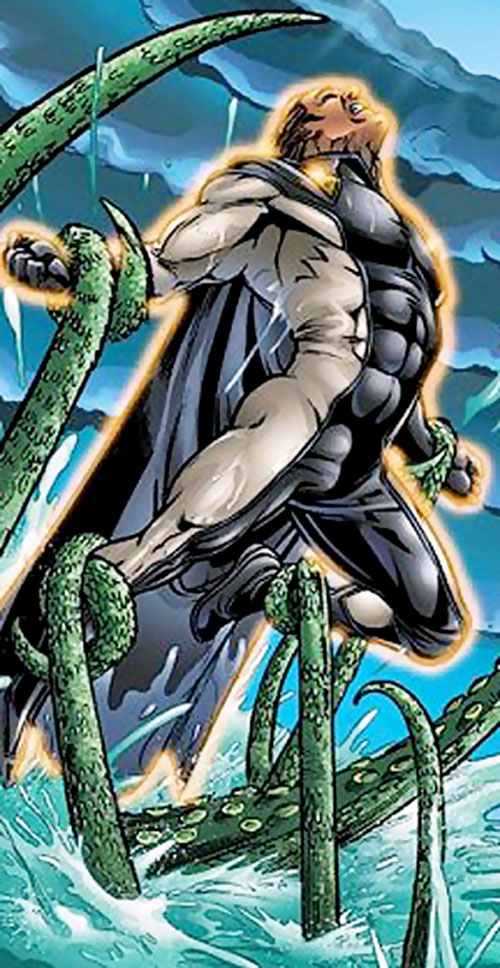