Corporate super-mercenary Venture was first seen in early issues of Spider-Man 2099, in 1992.

Venture is an elite mercenary, with robust training, a fortune in cybernetic enhancements, and top-shelf weapons.

His most notable assets include :

During his second appearances, Venture could also make his hands leave his body, fly through the air and wrestle Spider-Man 2099 (Miguel O’Hara) to the ground. This seems to have been a contingency measure, added so he could keep fighting when immobilised.

Miguel O’Hara described Venture as being psionically  enhanced. However, no such thing is visible. But it’s certainly possible that Venture’s ability to reconstruct past events based on heat traces is a mix of technology and psionics.

Perhaps he has a minor “past vision” power that was enhanced to useful levels using psychotronics , then coupled to a custom high-end IR scanner.

In his second appearance, Venture demonstrated Terminator-like durability. He kept coming back despite taking massive damage, though it took a little bit of time.

It is thus *possible* that his unspecified psionic potential granted him new powers as he awoke from his coma. It’s a No-Prize Hypothesis , but it’s not an unprecedented story beat in the genre.

Venture was the first Alchemax Elite agent sent after Spider-Man 2099 (Miguel O’Hara), right after O’Hara gained his powers. Though Venture had a clear initial edge over his quarry, Spider-Man narrowly turned the tables on him and escaped.

Venture was badly damaged by the fight, including neural net damage. Most of it occured after Spider-Man jammed Venture’s own fighting staff into his leg circuitry and activated the shock field.

The mercenary remained unresponsive for months.

Alchemax hired Venture’s sister, Risque 2099, to take on Spider-Man 2099. She lost the fight due to overconfidence. But as she was fighting, Venture recovered and came in. He hated his sister so much that a need for preventing her from upstaging him had shaken him from his coma.

Now more experienced, Spider-Man 2099 had the upper hand. However, Venture wouldn’t stay down. Even after a collision with a maglev train , he kept getting up. Eventually, Venture held off Spider-Man long enough to tell him that he didn’t want a fight. He had come to make sure his hated sister wouldn’t win, by helping Spidey if necessary.

As Risque was laying on the floor, fighting Spider-Man’s poison in her system, her brother proceeded to beat her with his staff. Spider-Man heroically left.

Later on, the Superior Spider-Man (Dr. Otto Octavius) found himself in the 2099 timeline. He raided several corporations, including Alchemax, to procure technology. Alchemax sent Venture after him. However, the ruthless, powerful and well-armed Octavius apparently defeated (or at least escaped from) Venture.

Later on, Miguel O’Hara encountered one Kweeg. Kweeg came from a possible, alternative version of the year 2099. He invaded the XXth century using the time portal O’Hara was working on.

Kweeg is the equivalent of Venture in his native timeline, yet a different character. However, when a confused Spider-Man called Kweeg “Venture”, Kweeg thought it was a cool name. He adopted it.

Kweeg also changed his outfit and armament to evoke Venture 2099, though the differences are still readily visible.

Venture really, really wants everyone to know that he’s a hard man, a thorough professional, and not impressed. It’s a so-so Clint-Eastwood-as-a-tough-cowboy-bounty-hunter impersonation. Yet he’s got enough charisma to make it work against ordinary people.

He’ll act in a condescending and insulting manner, calling other men “son”. Venture will also keep telling his enemies how their situation is hopeless, and how he could easily beat them since he’s such an awesome pro, blah blah.

If he starts getting overwhelmed in a fight, Venture will get angry – and thus markedly less precise.

Venture *hates* his sister with, as is traditional, the power of a thousand exploding suns. He’ll do and endure anything so his sister can’t demonstrated that she’s more powerful than he is. When he found her helpless from poisoning, he seized the occasion to badly beat her (and possibly murder her).

One gets the impression that Venture’s macho macho man attitude stems from feeling emasculated by, and/or having been bullied and harassed by, his more capable and equally cruel sister. She certainly seems to be a sadistic so-and-so, and goes out of her way to make her brother suffer.

Tyler Stone: “Ah, Venture. *Finally*.”
Venture: “I do everything finally.”

(After killing a random Thorite) “In case you thought I was kidding, Spider-Man…. I don’t kid. And I don’t scare. But I don’t think you can say the same. I can smell your fear from here, and you’re smart to be scared.”

“I’m Venture ! I eat guys like you for breakfast !”

He’d fit without trouble in the Legion’s future, or even as a L.E.G.I.O.N. agent or rival.

Venture could also be a weird human/terminator agent in Dark Horse Comics’ Terminator series. They actually had one such hybrid, which was also seen in one of the later Terminator movies, and Venture has similarities with them.

Bonuses and Limitations:
Military Science is a Powered Skill, and Contingent Upon Thermal Vision.

By his second appearance, Venture has gained :

The first use of Anatomical Division against an opponent will often be a Blindside, due to surprise. The hands will normally attempt to Wrestle.

It is possible that they have a bonus for this and a penalty for all other Combat Manoeuvres. But there’s too little information to draw conclusions. One could always assume he was spending Hero Points to leverage the Blindside bonus.

From the flow of the scene, his Invulnerability did work as fast as the Power in the rulebook. This is rare enough to note.

I’m going by the assumption that his Alchemax Credentials are like Police Credentials, which do not come with a free Connection. Expecting Alchemax to do any favour for you, especially under Tyler Stone, is a bad idea. And Venture was outright antagonistic toward the Public Eye. So not having a Connection matches the material.

I also assumed that he didn’t really need Street Connections, given his super-tracking abilities and general misanthropic behaviour. 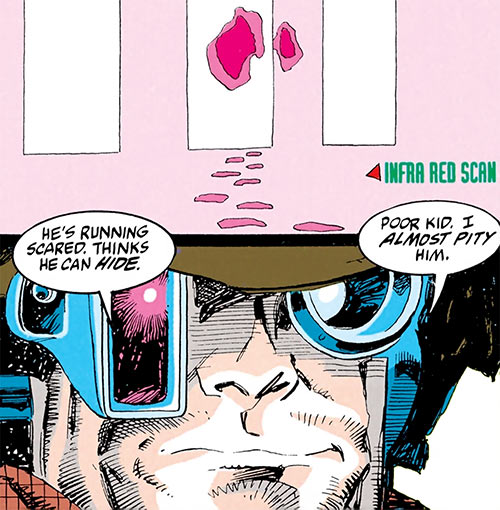