Vibe’s sonic powers enabled him to create shock waves. These could shatter concrete or even steel.

His agility was above average (and he was a superb break dancer). Under Batman’s tutelage he became a good hand-to-hand combatant.

The leader of the Detroit street gang Los Lobos, Paco Ramone had a secret asset : his mutant sonic powers. When the JLA moved to his hometown, he decided it was time to go after the big score. He asked to join under the name “Vibe”.

Steel and Vixen accepted him after witnessing his powers. However Aquaman, and to a lesser extend the Martian Manhunter, were understandably sceptical. Especially after Vibe managed to involve the JLA in a turf war in Detroit.

Vibe’s career in the JLA lasted for a few months. Over this time he gradually improved himself and became more and more efficient. He even played a vital role in defeating Despero. However, the “Legends” PR campaign by Darkseid  then struck, and heroes became reviled.

Paco went back to the streets of Detroit as he couldn’t stomach the public’s reaction.

While he was far from the temporarily disbanded JLA, he was tracked down. Despite a valiant struggle, Vibe was killed by an android dispatched by Professor Ivo. He thus became the first JLA member to be killed in the line of duty. The JLA later arrested Ivo for murder.

One of Paco’s brothers later became a member of the Conglomerate with similar powers, under the name Reverb.

A care-free, wisecracking street kid. While he was basically fun-loving, street smart and uninhibited, his time in the JLA was nonetheless tense as he tended to argue with other members.

Much of this brashness was caused by his own feelings of inadequacy alongside more powerful and experienced heroes.

“Word’s out on the street is chu guys are the Chustice League. I figure, guys like chu and me, we should be on the same crew.”

By Ray Winninger for Mayfair. Minor v1.1 upgrades by Sébastien Andrivet, and M&M stats by Pawsplay. 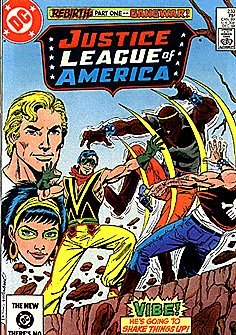