Vicious is an expert knife-fighter and knife-thrower. In melee she usually fights with a pair of blades. She seems to be quite swift and aggressive, and gets solid results even against troops armed with conventional weapons. But she’s not world-class, either.

Vicious is noted for her fearlessness (often bordering on the foolhardy) and her homicidal nature.

Files about Vicious mention a membership in the Bandidos motorcycle gang , Gotham chapter. It apparently ended poorly since there is now a death warrant about her among the Bandidos and their affiliates. This may be connected to one or more of the dozen murder cases in which she is a credible suspect.

Apparently she established herself as a successful, competent mercenary despite her odd choice of armament. This good rep earned her a place in the Ravens. This small all-women mercenary team was assembled by one of the world’s deadliest women, Cheshire.

As a member of the Ravens (along with Cheshire, Pistolera (formerly Gunbunny) and, for a while, Termina), Vicious conducted a number of missions. Those included a raid against a S.I.M.O.N. fortress to snatch a neutron weapon, and the recovery of an old Soviet satellite in an American lake.

This later mission turned out to be complicated, though. The payload of the satellite was generating a temporal disturbance that sent the Ravens into what seemed the Pleistocene . They briefly made it back to the XXth century, clashed with troops from Kobra (their employer) and Black Canary, then ended up in pre-Colonial times clashing with Huron  warriors.

Eventually, the Ravens allied with the Viking explorers of Jon Haraldson (aka the Viking Prince). Overall it seems that the Ravens spent two years in the past.

Black Canary was sent back to fetch them, but the operation went partially awry. Cheshire was recovered but she used Pistolera and Vicious to guarantee her egress. Furious, her two former wingwomen also evacuated from the past but popped back into the present weeks after Cheshire. They were immediately arrested.

All three women ended up imprisoned in the Slab. Pistolera and Vicious paid off a guard to make an attempt at killing Cheshire to get payback. Their attempt failed. They got out of prison, though, and were of course seen among the army of female super-villains and mercenaries assembled by Circe to take over New York City.

Despite their difficulties to stand each other, Pistolera and Vicious continued to operate together for some time. For instance, in 2004 they were seen working as enforcers for the Penguin. During that contract, the Gotham underworld just erupted due to a mistake of the vigilante Spoiler.

Vicious and Pistolera were part of the catastrophic streetfighting that ensued, and even managed to escape from Catwoman. They clashed at several points with the GCPD. In so doing they wounded or killed several officers, with Vicious nabbing Detective Montoya in the shoulder with a throwing blade. Eventually though, they were defeated by Robin (Tim Drake). 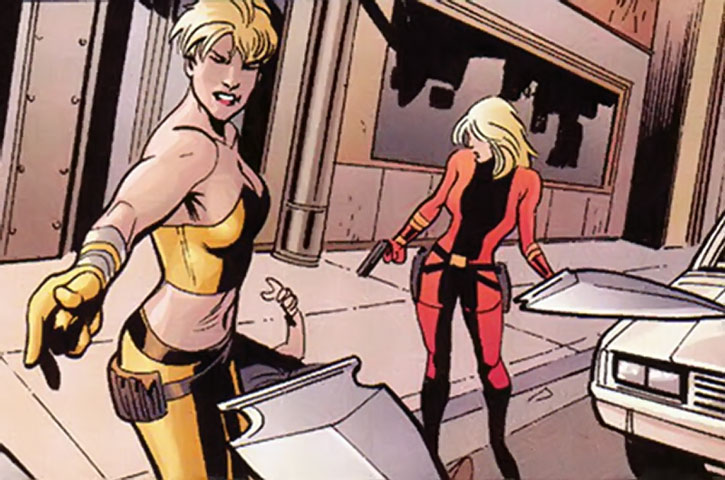 Pistolera was next hired (apparently by Cheshire) as part of the hitmen who attempted to kill the villainous Society members. She set up her shot with Vicious at her side as security, and managed to seemingly kill Knockout. Pistolera was seemingly killed in turn by Knockout’s lover, Scandal Savage, as payback.

Vicious is sort of the extreme sports enthusiast of the mercenary set. She’s in for the excitement and the rush, and tends to be impatient and superficial when not experiencing some.

Vicious can in fact be pretty annoying until you get used to her. She tends to indulge in catty comments about most everything (perhaps in the hope something interesting will happen) and “wow, gee, cool !” teenage moments. The latter are usually about stuff no responsible adult would consider “cool”, such as being trapped somewhen in the Pleistocene.

She has some self-preservation instincts, however. For instance, she was never catty toward Cheshire. In some ways, Vicious is a tad reminiscent of some Japanese pop idoru, though she kills people and her voice is presumably less annoying to Western ears.

Vicious seems to have no higher academic education whatsoever. She is unlikely to ever be accused of being a deep deductive thinker. She liked Melrose Place .

She also has a vaguely psycho streak, making a lot of jokes about killing people for no reason, carving people up for fun, etc. and being amused by morbid sights. She seems to really like icing people. Her eyes go wild and excited when she gets to murder someone.

Files about her note mental problems including psychotic rage and a bipolar condition (though she was always seen on a high wave and never on a low one. These are possibly linked to drugs abuse during her early adolescence.

Vicious liked to badger Pistolera by calling her Gunbunny, but seems to have stopped when they became friends, though she still has occasional remarks implying that Pistolera is a wussette and is too brainy.

(About her preference for close combat) “I like to feel their breath on my skin, Gunbunny.”

Kobra goon (surprised): “A woman ?”
Vicious: “No, buster… Three women !” (kills him)
Pistolera: “Nice move, Vicious. We were going to question him.”
Vicious: “There’ll be more, Pistolera. Even you shouldn’t have trouble finding a man in a Kobra hideout.”

(After the Ravens discover they are trapped in the deep past and narrowly dodge two prehistoric lions) “You know… this is kinda cool.” (behind her, Cheshire facepalms)

(As a throng of attackers has barely been repulsed, at the price of heavy casualties) “Let’s go after ’em ! Wah-hoo !!”

Cheshire : “Exactly. We have to move the fight to them.”
Vicious (picking her teeth with her knives) : “Vicious likes that. Oh, yeah…”

(About Robin) “His brain’s clearly addled. Look at the way he dresses.”

* Without Defensive Roll
**Without a knife
***With a single knife 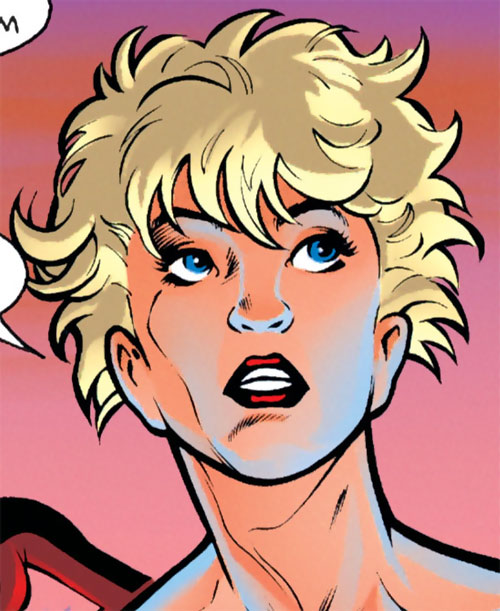 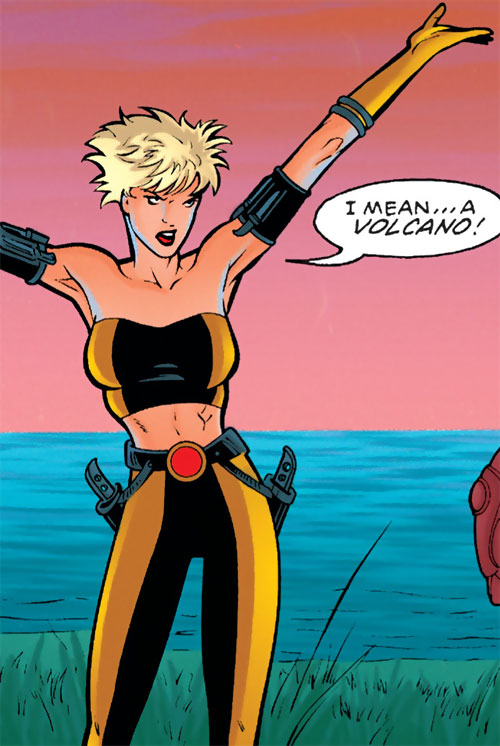 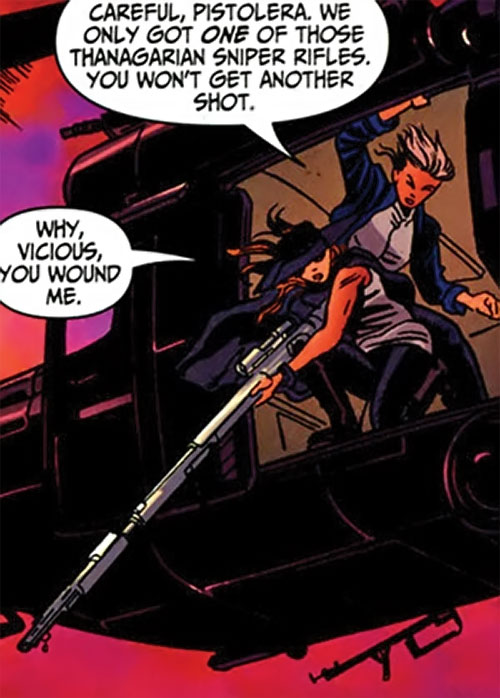