Video-man was created in this series and had three appearances. Marvel wanted to capitalize on the video-game craze of the 1970s and 1980s.

Video-Man is essentially intangible being made of pure energy. He can fire energy blast rectangles from his hands, the same used in his video-game, often using them for knockback attacks.

From his eyes come red beams that look like lasers, if they connect, the victim is banished into the cyber dimension. The victim can be seen as a digital image inside a video game.

Alternately, Video-Man may actually use his eye beams as lasers (in DC heroes RPG terms, Heat Vision) but it looks identical.

In his second appearance Video-Man showed off a new set of powers.

With the amalgamation of Video-man with Francis Byte, Francis was in control and was a better aim with his energy beams. It also appears he kept both a heat and cold ray which Video-man drained from Firestar and Iceman at an earlier meeting.

Nobody could ever tire of the intro sequence, right ? Right ?

Video-man was the creation of the villain Electro.

“Video-man” is also the name of a popular video game. The player assumes the role of “Blue-hero” who combats Video-man in a shootout. Winner takes the least hits, whoever reaches 100 hits on their opponent first wins. These stand-up arcade games were being delivered anonymously to key places all across New York.

Electro sent Video-man through these game systems to steal materials from three of those places. Video-Man would exit the game through the screen of the game grab the materials and dimension travel back. The Spider-Friends intervened and consequently, Firestar and Iceman found themselves exiled to the Cyber Dimension.

After Video-man captured his last material – silver. Electro taunted Spider-Man through the screen of the Video-man video game. The machine was rigged to explode and only Spider-Man’s Spider Sense allowed him to escape with his life.

Meanwhile, Firestar and Iceman played Electro’s games with their lives as the stakes. Electro continued to switch games threatening that if they lose he would unplug the game, killing them. Firestar and Iceman escape their own game screen and arrive at Flash Thompson’s screen, who had been captured earlier. 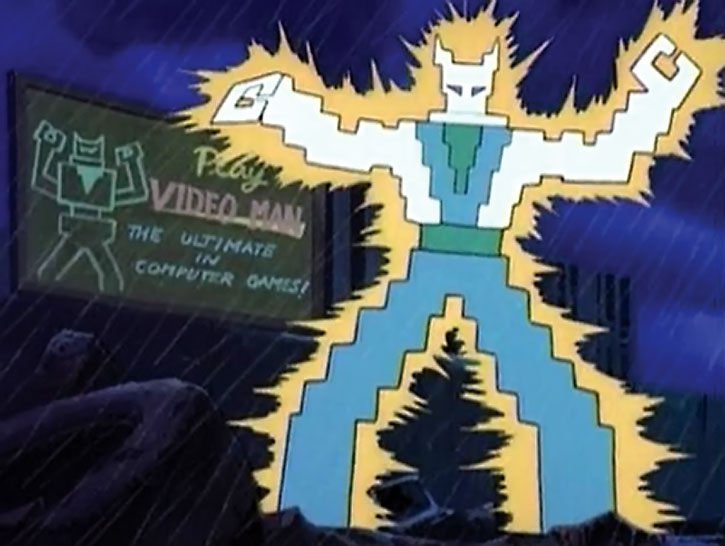 After rescuing him the duo try to find a way out of the cyber dimension by traveling along connecting lines.

Video-man delivered his three conductive metals (gold, silver, and copper) to Electro. Spider-Man puts the pieces together and deduces Electro was building a super-Transformer! Spider-Man tracked the villain down to his underground lair.

Iceman and Firstar are both recaptured and placed in another time limit game that will shutoff after it counts down. Flash Thompson has other ideas, he travels from screen to screen, screaming all the while, and saves Iceman and Firestar in the nick of time.

Spider-Man dupes Electro and Video-man into firing on one another destroying the Super Conductor. Spidey saves his friends at the last second of the game.

Once Spidey had control of the computer, Flash, Iceman, and Firestar could exit through the screen. However, Flash didn’t remember anything afterwards.

The Video-man arcade game, badly damaged, was delivered to the city dump during a thunder storm. Lightning struck the game itself and Video-man was able to escape the cyber dimension he had been trapped in once again.

Video-man began absorbing electricity from nearby lines which caused him to grow larger. Video-man could absorb electricity from even that of mutant minds which generate more powerful electric impulses than normal brains. 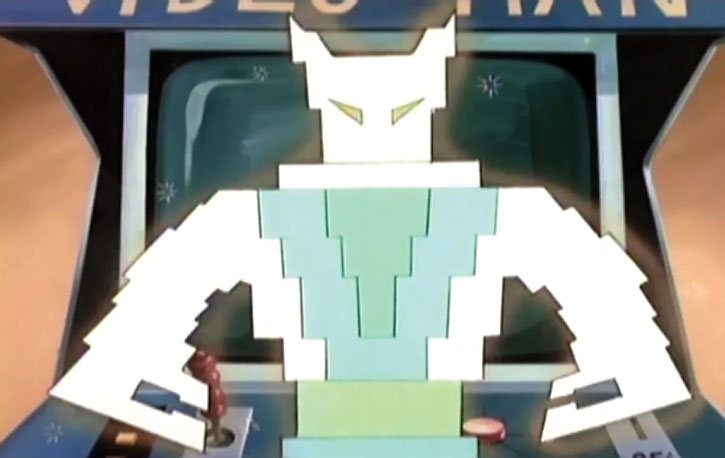 Video-man traveled to New York’s main power grid absorbing energy from the city as he went, growing in size all the way. He then summoned two creatures from the Cyber Dimension to aid him, however they both turned on him and all three were apparently destroyed in the battle.

Francis Byte, a young video-gamer, was engrossed in gaining the high score on “Zellman Command” at the local arcade.

However, he was interrupted when the Gamesman sent a hypnotic signal that entranced over 300,000 people all accross New York. Francis’ game exploded and he was absorbed into a video-game transporting him to the Cyber Dimension; there transforming him into Video-man. 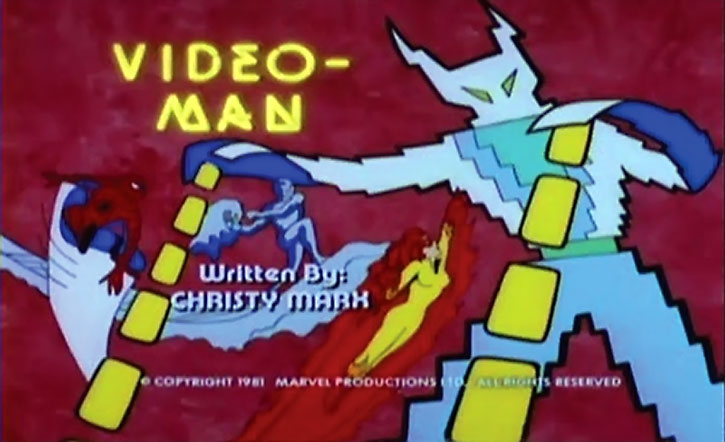 Francis’ body and mind were fused with that of Video-man. Francis showed he could transform between Video-man and his own form at will. He decided he would use his new powers for good as a Super hero!

Video-man didn’t get time to practice his powers before he was called on to use them. Though quite naive he helped the Spider-friends defeat the Gamesman and rescued Louise. The two fell in love and Video-man was introduced to the X-men.

He joined the X-men as their newest member, learning to use his power under the guidance of Charles Xavier.

Video-Man looks like an 1980s style blocky video-game character. His legs are completely blue and he has a blue “V” on his chest that extends all the way up to his neck and down to his waistline. While his uppper torso and head are white.

Video-Man has a green “belt”. Video-Man glows with a yellow aura at all times. His back is completely blue.

Video-man is given a task by Electro. He will follow it to its end and defeat anyone who gets in the way. Beyond following his directive, he’ll stand to the side motionless or retreat back to the Video-Man game and stand motionless on the screen observing.

In his second appearance, Video-Man didn’t have Electro to give him orders. So, making decisions on his own he kidnapped J.Jonah Jameson, putting him in the Cyber Dimension. He attacked the Spider-Friends, then began syphoning energy off New York’s power grid.

“Thank you Spidey ! You’re my inspiration, my role-model.”

The first two episodes Video-man acted independant of Francis. He was created by Electro and at first was only an enforcer doing whatever Electro needed.

The second time Video-man left the Cyber-Dimension he tried to gain power by draining energy from New York’s power grid. Video-Man’s powers have grown since his first appearance as detailed below:

Episode – The Origin of the Iceman 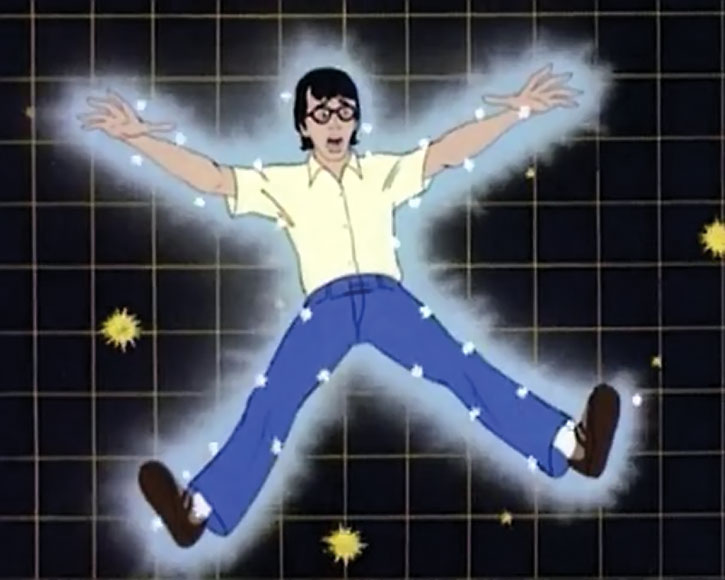 In Video-Man’s second appearance he summoned characters from other arcade games, essentially Dimension traveling these beings from the Cyber Dimension to the real world.

As these creatures take damage the damage cannot be percieved but when the Body is reduced to 00APs, the creatures explode instantly being banished back to the cyber-dimension. Two are given below:

The Cyber Dimension that exist inside the world of video-games may be entered and exited by the use of the Dimension Travel power. The victim can look out of the dimension through the monitor screen and can see and hear everything within normal range.

Inside this universe all a victim would see is a pale purple/blue background but can determine the edges of the screen. Once a game is started the constructs of the game appear as real, solid objects. A victim caught in this world can be injured or even killed by the games.

Unplugging or otherwise shutting the game off will scatter the atoms of anyone in the Cyber Dimension. So, anyone traveling in this dimension must be on a computer, game, etc. that has power at all times. The only exception to this is characters native to this dimension.

Characters transfered into the game can learn how to travel between machines simply by moving to the edge of the screen where wiring is in close proximity. Exiting the game without the Dimension Travel power is difficult if not impossible without outside help.

From the outside it is revealed anyone controlling the machine may allow the travelers to exit through the screen itself.

Source of Character: The 1981 animated series Spider-Man and his Amazing Friends, episodes Video-man, The Origin of the Iceman and The education of a superhero, voiced by Frank Welker. 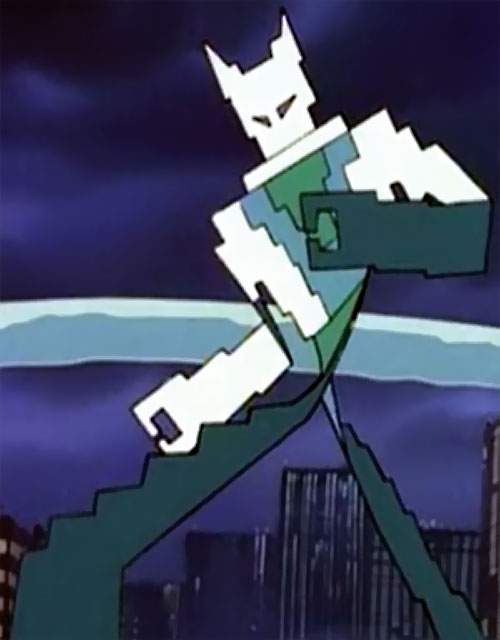 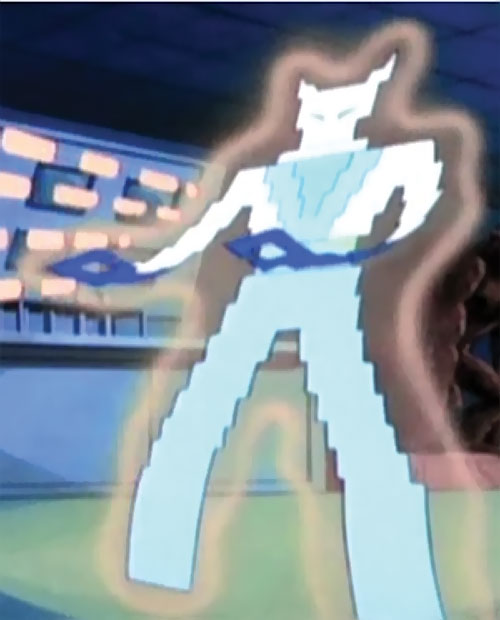 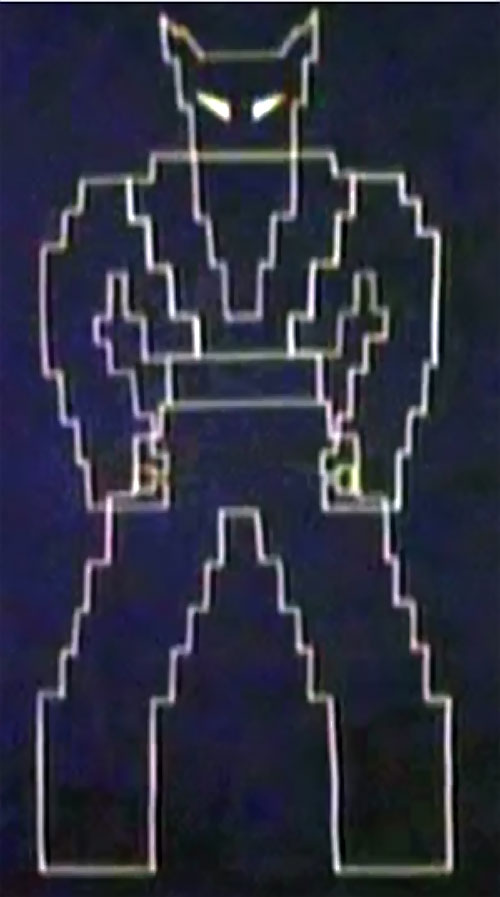 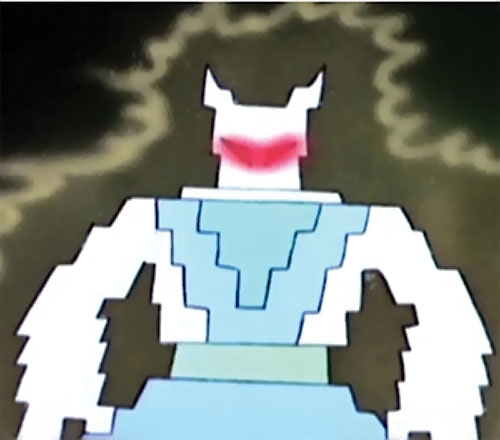 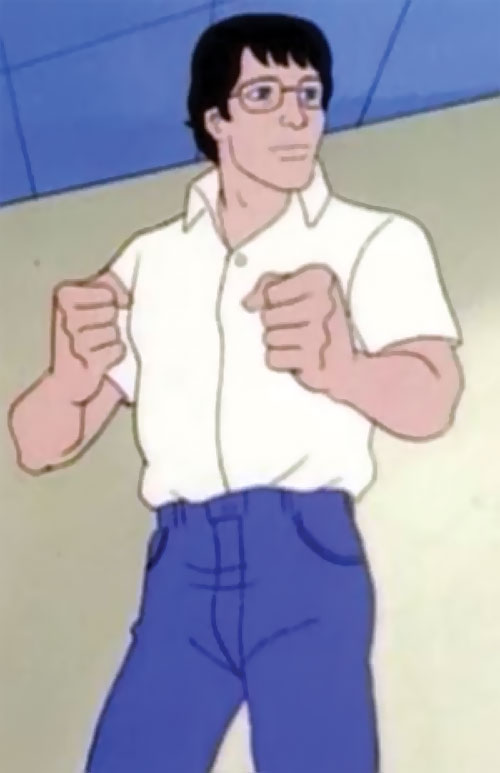 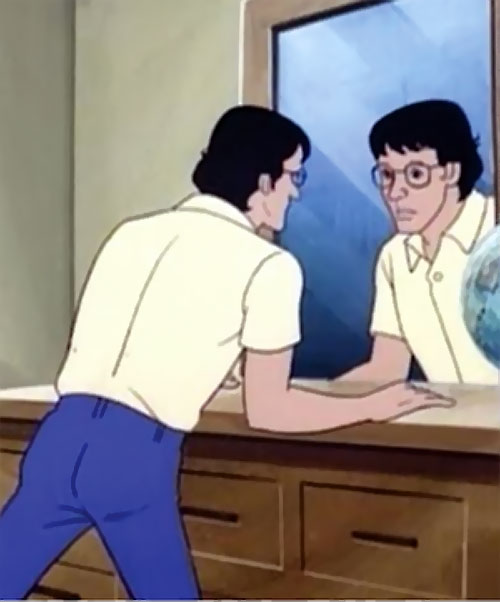 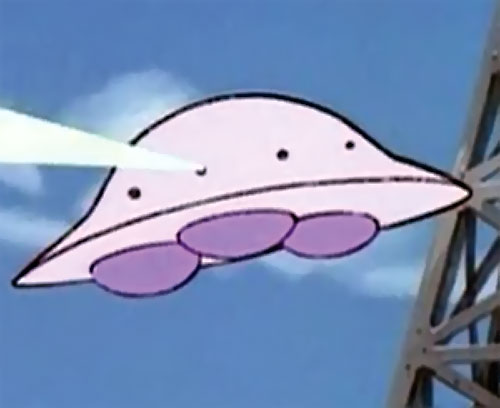 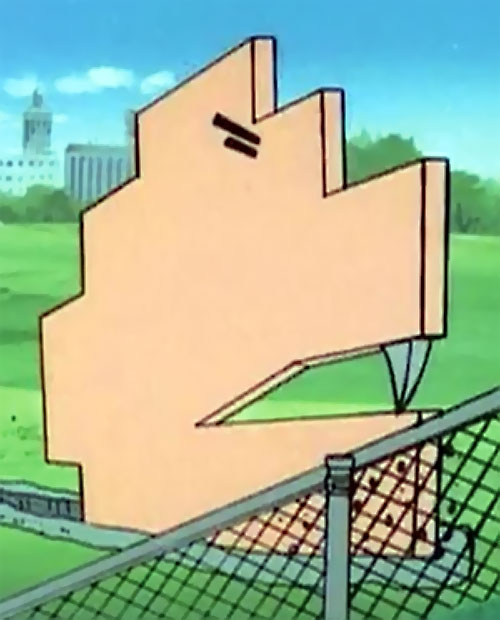