Greg Sanders’ grandfather was a famous killer of natives. His contribution to this genocide helped open up the American west for settlement in the XIXth century. He was slain by an arrow in a battle with Indians. Greg’s father carried on this fighting tradition, but instead battled criminals out West and became a sheriff.

Greg himself was born in Wyoming. Even as a child was thrilled to watch his father in a gunfight with criminals.

Greg eventually went East and became a country singer on the radio. But when Sheriff Sanders was killed by thieves out to steal a gold shipment he was guarding, Greg Sanders was called back West.

The younger Sanders tracked down the members of the gang of thieves. Afterwards, he devoted his life to hunting down criminals as the vigilantes did in the Old West. Sanders thought that the laws and codes of the Old West were better than the complicated legalities of the modern age.

Thus Greg Sanders led two careers. One as a radio singer, and the other as the masked crimefighter known as the Vigilante.

As a “prairie troubadour”, his golden voice and country songs made him one of America’s most beloved celebrities. He was as famous as Roy Rogers  and Gene Autry . Sanders also starred in such films as Pistols on the Pecos, Radio Rodeo and Maverick Melody. He was a hero to millions of young boys.

The Vigilante stopped the likes of the Lash, the Head or the Dummy. He operated in New York City but he also had adventures in the West. For a time he was assisted by a sidekick named Billy Gunn, the “Time Square Cowboy”.

Not a lone ranger

The Vigilante was a member of the wartime All-Star Squadron and the Seven Soldiers of Victory (aka the Law’s Legionnaires). But the tremendous forces unleashed by the Soldiers’ battle with the Nebula Man hurled the Vigilante back in time to the days of the Old West. 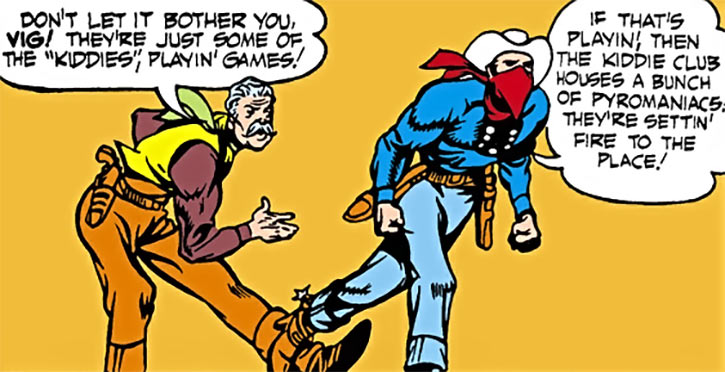 Billy Gunn and the Vigilante.

The second Black Canary, Green Arrow and Johnny Thunder found and brought the Vigilante back. However, due to Johnny Thunder’s incompetence, Sanders had spent decades there. One of his ’cases’ whilst time-displaced was leading a posse to kill a monstrous “buffalo spider”, a house-sized wolf spider.

Sanders retired, keeping Stuff as his business manager, and invested his fortune in a national chain of restaurants called Greg Sanders’ Round-Up. Sanders also took up a new hobby : studying the modern breed of costumed lawmen. One in particular, El Diablo, caught Sanders’ attention, and he managed to not only meet him but also fight alongside him.

In 2005, the buffalo spider Sanders thought he had killed back in the past was sighted again. Greg recruited a new posse to hunt it down. An aged man whose reputation had been mostly forgotten, he only managed to recruit C-list super-heroes. But then, he was not expecting the JLA anyway.

With his five allies — including the Whip, Gimmix and I, Spyder — he hunted down and killed the monster. But the posse was then slaughtered by a hunting party from Summer’s End led by the Nebula Man.

However, the Vigilante came back as a ghost. He now was a spirit of justice whose status and abilities are unclear, but who seems quite powerful. He has been called the “spirit of the gun”.

One of the first deeds of the ghostly Vigilante was to shoot the Hand. Also known as the Iron Hand, he was the criminal who, in the 1940s, had launched the crime wave that resulted in the formation of the Seven Soldiers. The undead Vigilante had learned that the Hand was behind the trap that had led the spider-hunting posse to its death, and enacted justice.

Greg Sanders was never vague about his motivations for becoming a crimefighter. He knows that, as one man, there is a limit to the number of crimes he can stop. His real mission is to send a message : to let the bad guys know that the law still has some punch in it, and to make the plain folks a little bolder, to show them what they can do – what they *should* do – what has been done.

Some men play for sky-high stakes and some play penny-ante, but those who gamble with the law… must pay the Vigilante. 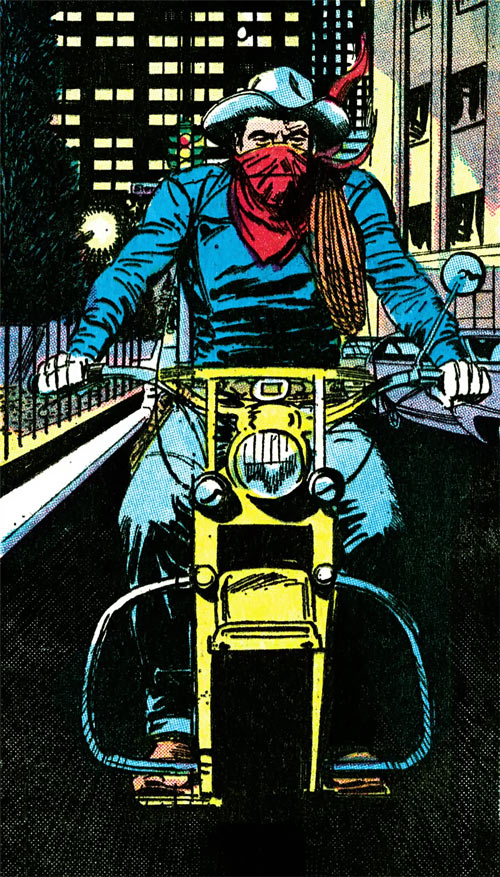