Violence does not have any super-powers. But she is a gifted and highly trained S.H.I.E.L.D. agent, specialising in combat. She is aggressive, fearless and willing to employ experimental weaponry more sensible people would avoid carrying on their person. 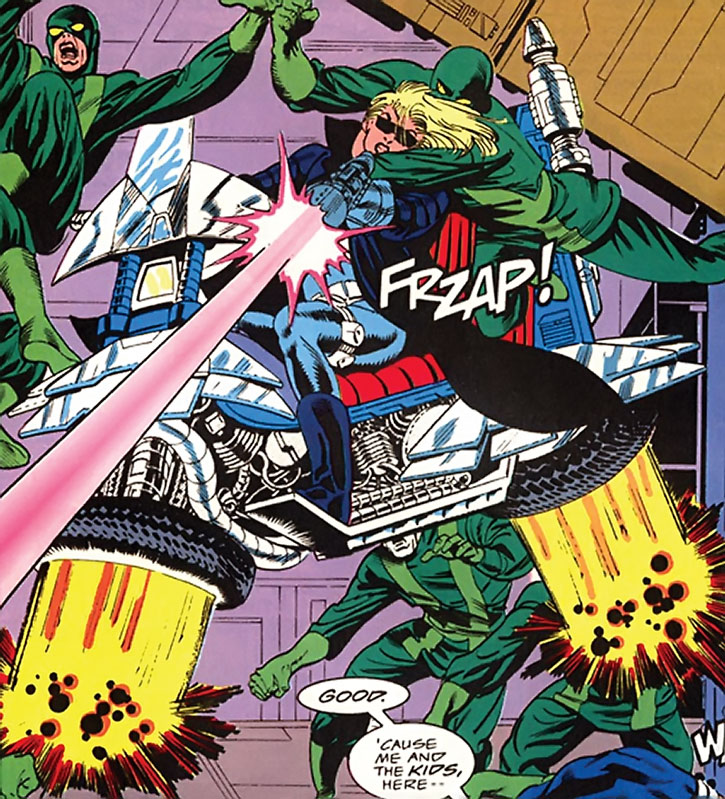 It is entirely possible that she has even more weapons than the ones that were show. For instance a few flash-bang grenades, a garrote in her bracers, etc.. Slapping a missile or two on her bike is also a fairly safe bet.

For what it’s worth, the assault bike resembles a S.H.I.E.L.D. prototype seen during the late 1960s Steranko era.

If you stick with the official continuity and have her now be a HYDRA agent, you might consider giving her variants of the Satan’s Claw combat gloves used by Baron Strucker instead of her S.H.I.E.L.D. weapons.

Violet Pinkerton a.k.a. Violence is a descendant of Howling Commando member Percival Pinkerton. A troubled youth with uncontrollable violent tendencies, she spent time in prison in her native British Isles.

Due to her psychological issues she was turned down by S.H.I.E.L.D.. However, there was a good chance she’d be recruited by a terrorist organisation such as HYDRA or AIM instead. Given her fearlessness and sheer combat ability, that was considered a problem.

Eventually, S.H.I.E.L.D. senior officer G.W. Bridge decided to have Pinkerton join an experimental project. It was a new team of Super-Agents. This way, she would be under close supervision. And her occasional disregard for her own safety and that of her allies would be less likely to lead to the death of S.H.I.E.L.D. operatives.

Furthermore, that provided the techs with somebody willing to field-test their new gear.

As Violence, she took part in several missions. In these, the young Super-Agents accompanied Nick Fury in the field for high-stake missions.

This volume of Nick Fury ended weirdly. Suddenly in the last few issues most of the new characters turn traitor and/or die. Specificallyn Violence was revealed to be an infiltrated HYDRA agent, and likely was the one who murdered Ivory.

Then, through a deus ex machina S.H.I.E.L.D. suddenly returned to the status quo from before the Deltite conspiracy, with tons of old characters returning from the dead.

Violence is a tough guy elite soldier and a 1990s bad girl. Apparently she harbours a need for confrontation, violence, explosions and the like. She is fearless and goes for the throat whenever… whenever… well, pretty much all of the time, really.

She’s a very angry person and feels in her element in battle. She thinks that building a flamethrower into a plasma pistol or having a combat bike that can be ridden through fire is a great idea.

Violence has a personal problem with Fury, and gives him lip fairly often. Apparently, this was caused by accusations of war crimes concerning her grandfather’s time with the Howling Commandos. She felt that Fury (who may not have been aware of the issue) did not do enough to clear Pinky’s honour.

“I realise the S.H.I.E.L.D. shrinks pigeon-holed me as being suicidal — but I always assumed I’d pick the time and place of my own. Instead, I’m following Lord High Fury the Living Fossil into the valley of death, because every other peace-keeping organisation in the world has justifiably lost faith in the old man.”

Nick Fury: “The walkin’ armoury on my left…? She ain’t got no super-powers to speak of, but with a code name like Violence…”
Violence: “I manage.”

“Who are you calling a lady ?”

“How positively subtle. I *abhor* subtlety.” (KA-BOOOOM !) “Anyone still conscious, should throw down their weapons while they still have the limbs needed to do so.”

“Hail HYDRA ! There will be no survivors !” 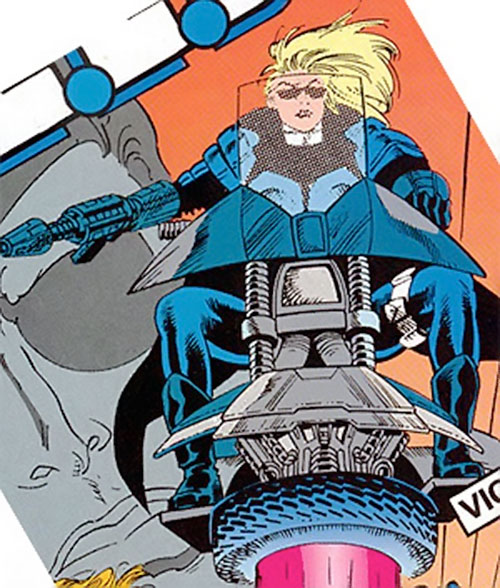 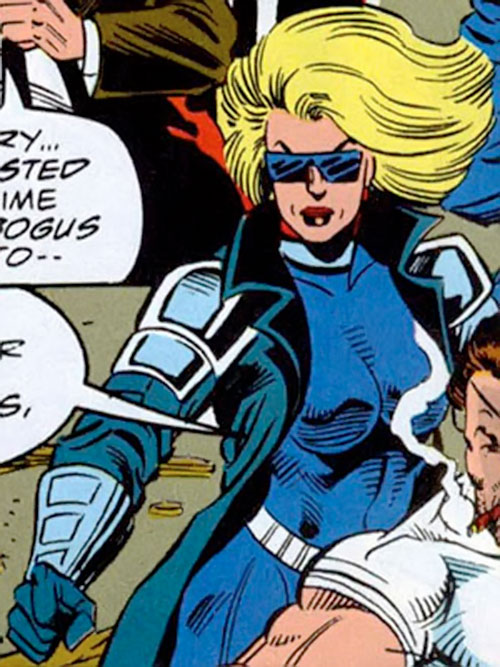 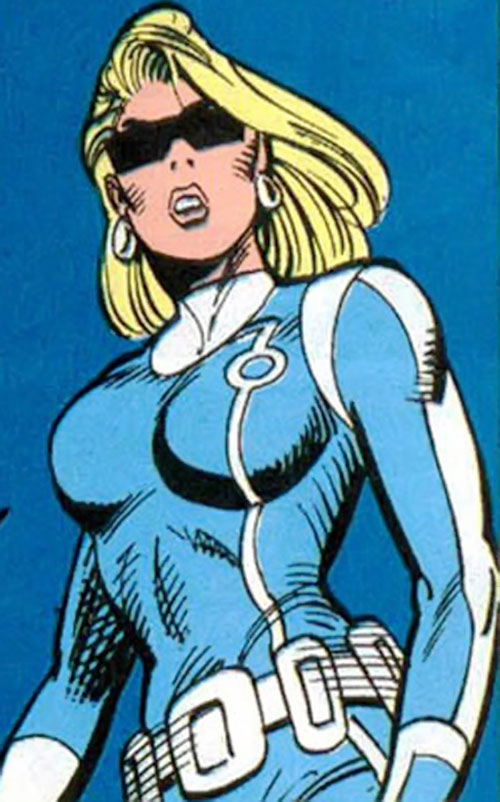 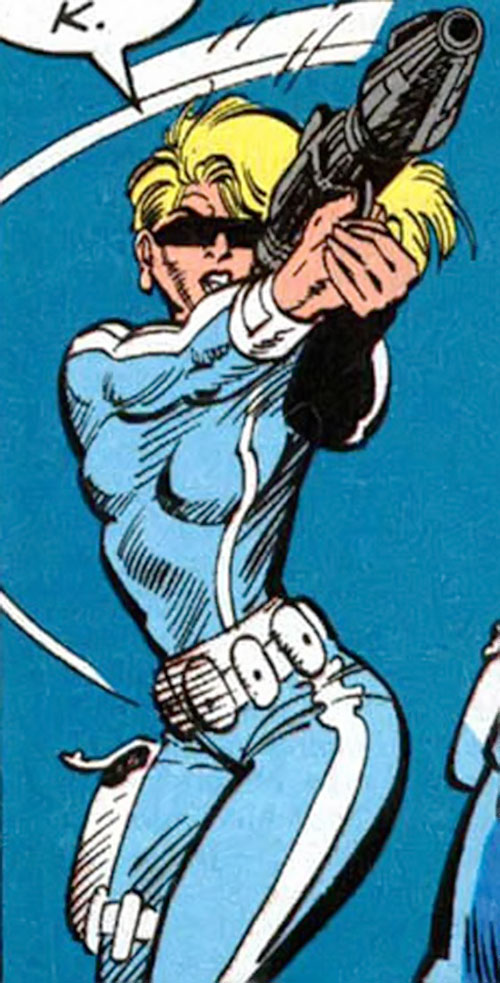 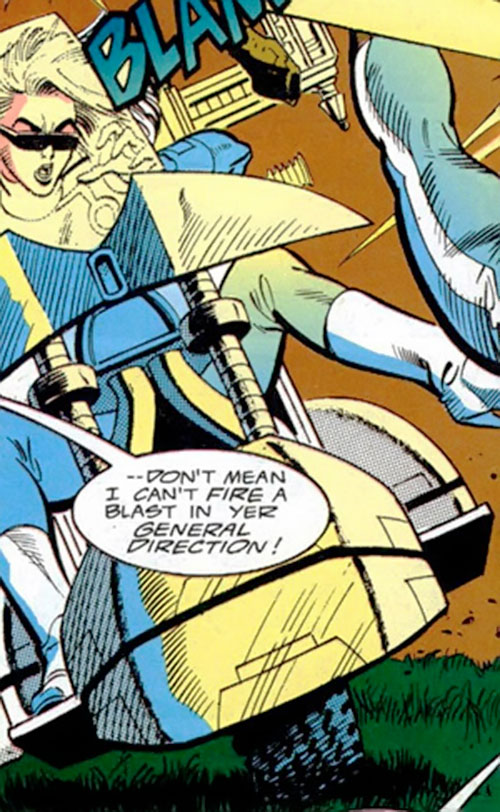