Violens is a natural-born killer and a veteran who fought in Việt Nam. He’s great with firearms, knives and grenades, and seems to be primarily an assaulter. He is a brutal, experienced and fearless fighter. His extensive training allows him to deploy all sorts of tricks to slant odds in his favour.

Schultz will routinely use his enemies as human shields. It’s not meant to deter them. He’s largely counting on their “friends” to open fire anyway and do his work for him.

If he has time to prepare, Violens will not just charge in. He will have a plan based on surveillance, diversions, fallback measures, etc.. And he will liberally use smoke and other grenades.

His arsenal revolves around typical early 1980s American weaponry such as Colt M1911 .45 pistols, a M16 assault rifle, Ingram Mac-11 machine pistols, K-bar knives and US Army grenades. He often has a M60E2 machinegun around, but this is seldom used. It seems to chiefly be a visual reference to Rambo movies.

In Bête Noire, he and his assistants primarily use Uzi and Mini-Uzi submachineguns.

The OST to Taxi Driver seems to fit.

Ernie Schultz is a professional photographer from New Orleans. During the late 1960s he worked in Việt Nam. He apparently was an Army photographer.

His service during this war left him traumatised, as he discovered that he was a savage killer. His deeds earned him the nickname of “Violens”, presumably as a pun over a photo camera’s lens.

(One can imagine that Schultz was drafted and fully trained as an assaulter, and was deployed as such until somebody remembered that he was a photograph and gave him a camera. But it doesn’t matter – the story takes place in a narrative genre where elite military skills just exist. And never deteriorate from lack of use, of course.)

On one occasion, the patrol Schultz was with was obliterated, leaving him the sole survivor. Shellshocked and in a rage, he blindly opened fire on nearby persons. All that did was to murder hapless farmers, including women and children. Schultz attempted to commit suicide over this massacre, but his mud-filled .45 jammed.

There were other terrible incidents, but Schultz never spoke about those.

Once he returned stateside, Violens couldn’t stand being a reporter. Instead he did photoshoots of marriages, commercials, baby pictures, etc.. Eventually, he found his niche as an adult magazine photographer. 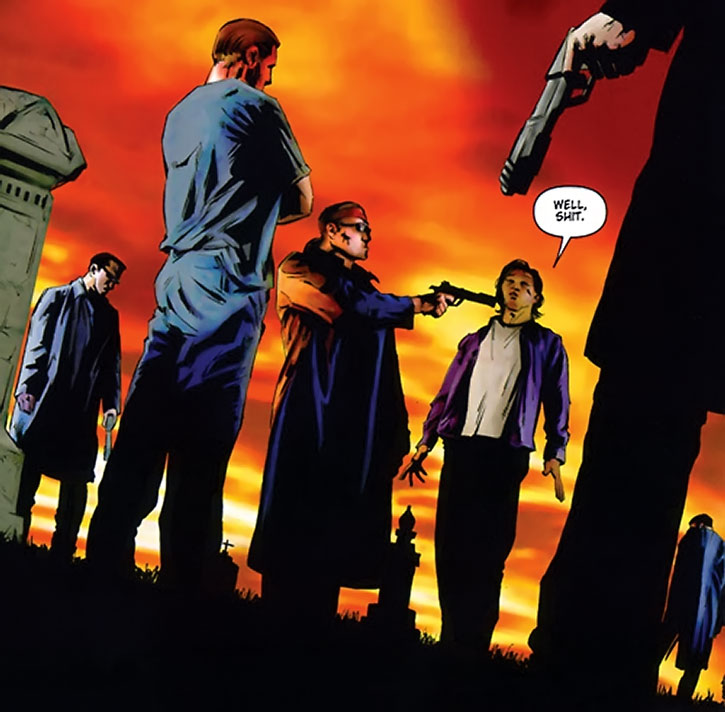 When a friend of J.J. was executed, Sachs swore to kill the murderers. While uneasy at the prospect of violence, Ernie wanted to protect Sachs and had to get moving. He quickly found her trail after J.J. armed herself with a whip bought at the sex shop operated by Ernie’s aged parents.

Violens is a large man. He has a distinct Ernest Borgnine  vibe and advanced male-pattern balding. He is not actually fat, though – he just has a thick build, and most of the meat is muscle. He seems to be in his mid-40s.

Violens is fond of wearing a headband and mirrorshades, and often has a trenchcoat to hide his arsenal. 1980s, eh ?

Ernie’s goal was to have an ordinary, boring, awkward, middle-aged life. With this, he could keep his inner violence and trauma under control. He liked acting like a protective big brother to his friends. He’d also downplay himself as a has-been without a past, and avoid circumstances that could make him lose it and go crazy.

Juanita was apparently his closest friend. Since his PTSD  and anger issues curtailed his social life.

After the fights in New York and New Jersey made it impossible for him to have a normal life, Schultz just gave up. He let J.J. call him Violens and was back to being a ruthless, pragmatic killer and crafty tactician.

This was closely linked to J.J. jumping his bones. From there, he let go of his accrued inhibitions and years-long attempts at keeping his least civilised nature in check. For starters, getting into deadly firefights was soon rewarded by the aroused J.J. pouncing on him.

Violens did not go completely wild, though. Finally indulging in his long-repressed wish to have sex with J.J. gradually became an actual relationship. Agreeing to ruthlessly killing a bunch of people was done in the name of justice, in a world where the police and the judiciary do not work.

And Schultz keeps a certain Responsible Dad™-like outlook, especially when it comes to protecting children.

Sachs and Violens are fanatically dedicated to each other. They will take stomach-churning risks without hesitation to support each other. Their entire life is about being together.

“I can’t stop thinking about you. And I gotta make sure you’re okay. Even if it means acting like I did back in ’Nam.”

(Threatening two men with a grenade) “Now, now, Ralph… Don’t be hasty with that gun. Remember the first rule of weaponry, namely – as soon as you pull the pin, Mr. Grenade is no longer your friend. Now while you ponder that, go get George here a paper and pen so he can write some things he didn’t bother to tell the cops.” 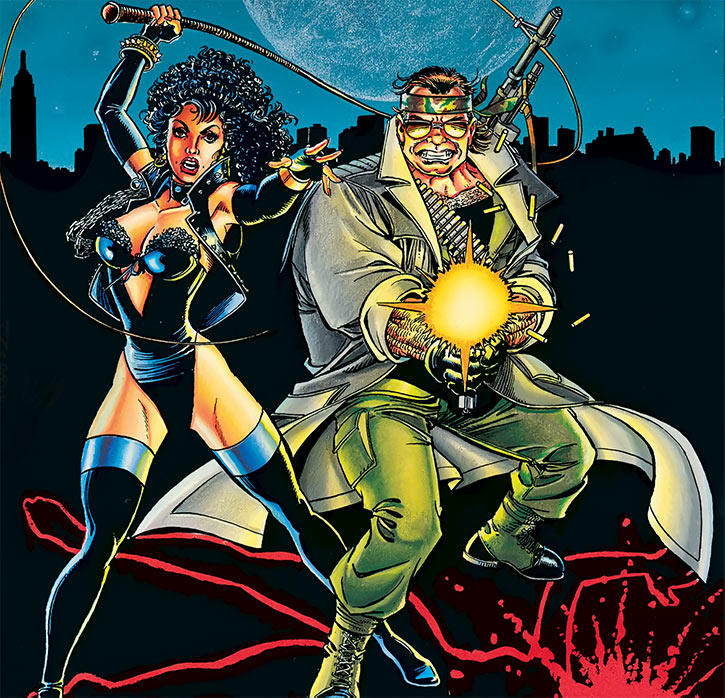 “You are under arrest by authority of the Magistrate of Bête Noire. Surrender immediately.”

(Looking at the Fallen Angel fly away with the man he came to arrest) “And me without my jetpack.”

Bonuses and Limitations:
Awareness only for events threatening the peace of Bête Noire.

The Chief Enforcer is aided by tough, dour gentlemen with an obvious experience with deadly violence. If they are summoned, Ernie will usually be accompanied by an half-dozen such guys – unlike Shadow Boxer, he doesn’t have superhuman abilities to rely on. Those aides seem quite disciplined and are presumably ex-military. They have the following stats :

Advantages:
Familiarity (Military equipment and protocols), may have Citizen of Bête Noire. 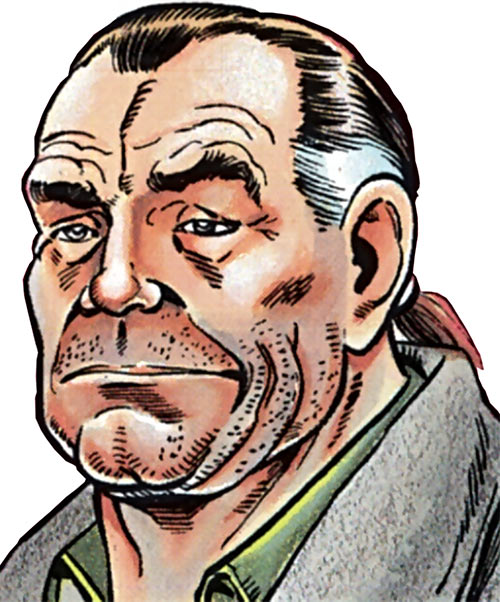 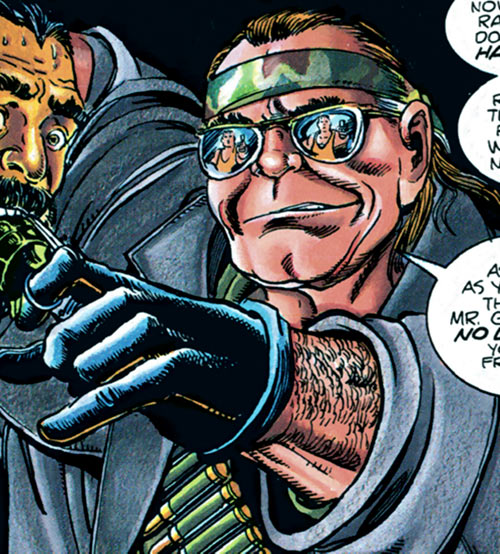 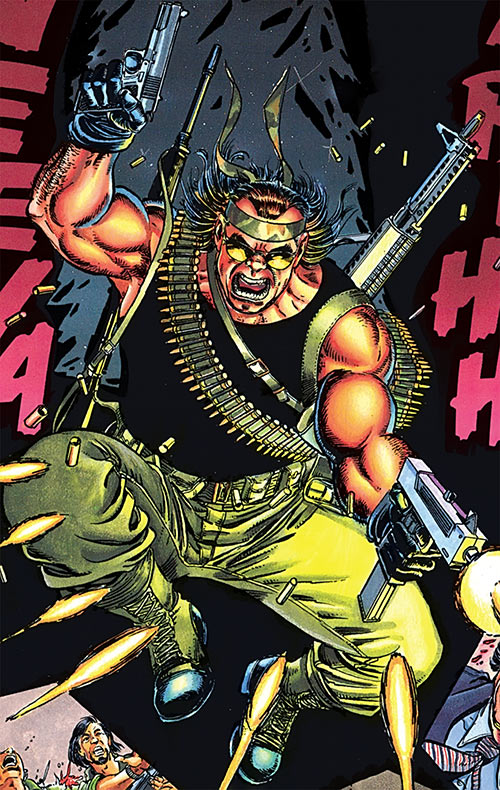 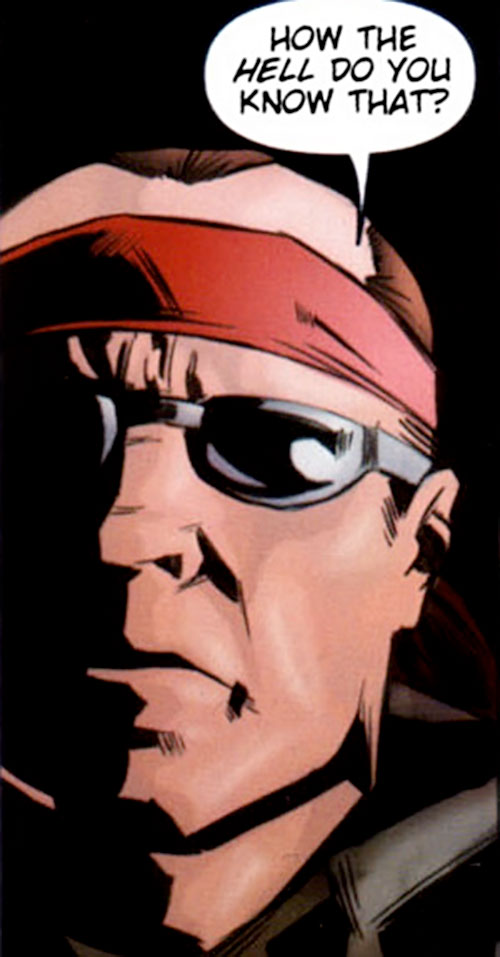 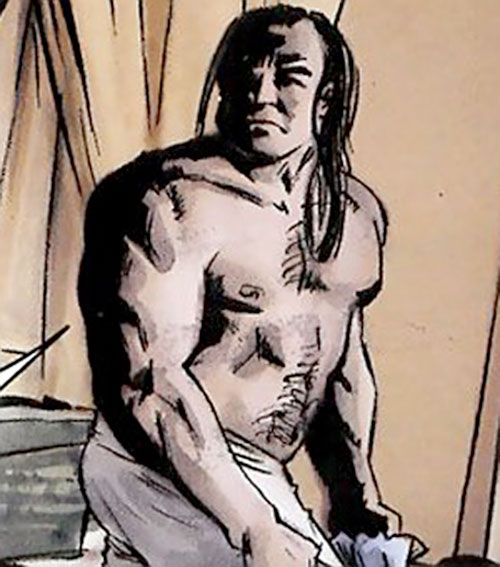 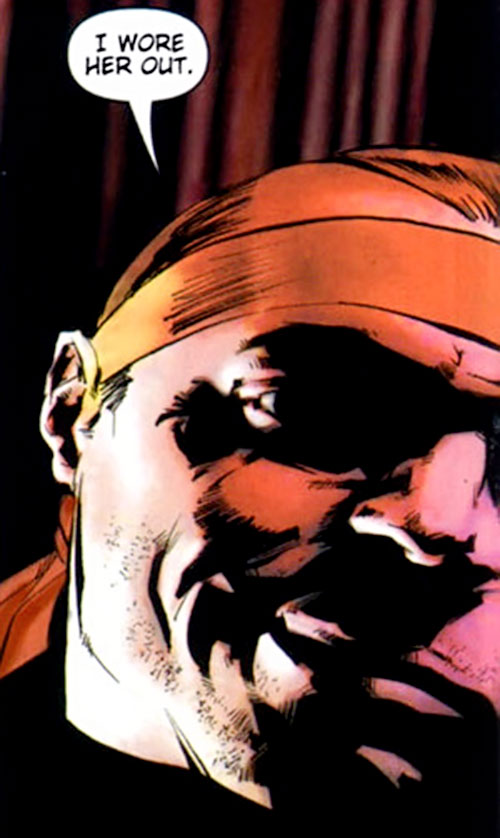