’For hearts long lost and full of fright,
For those alone in blackest night,
Accept our ring and join our fight,
Love conquers all,
With violet light !‘

This profile is for a generic Violet Power Ring worn by the Star Sapphire, representing the emotion of love (sort of).

Violet power rings are fuelled by love, and can detect when true love is threatened within their area. Love can also be used to heal others, drawing on the victim’s loved one for the power to heal them. In this way they can even return the recently deceased to life.

They can also see others’ thoughts to a degree, and even reveal the truth to them about what they really love.

As well as standard force constructs, Star Sapphires can create crystalline constructs, trapping their enemies within and trying to convert them to the way of love.

Violet Rings look for wielders with great capacity for love. This works even if the target of their love is unrequited or lost (in which case the Ring fills the hole this love left).

Wonder Woman was recruited due to her love of all life, whereas Carol Ferris was recruited for her unrequited love, the Ring filling the void within her.

They do not, however, appear to choose males. This was likely programmed in by the Zamorans.

There are also cases of converting Yellow Lanterns such as Fatality, where they’ve had to dig to find the love hidden within. But left to their own devices will choose those whose love is more apparent.

They failed to convert the Red Lantern, Bleez, by the same method, as her rage came from being raped by Sinestro Corps members who’d jokingly called it love. 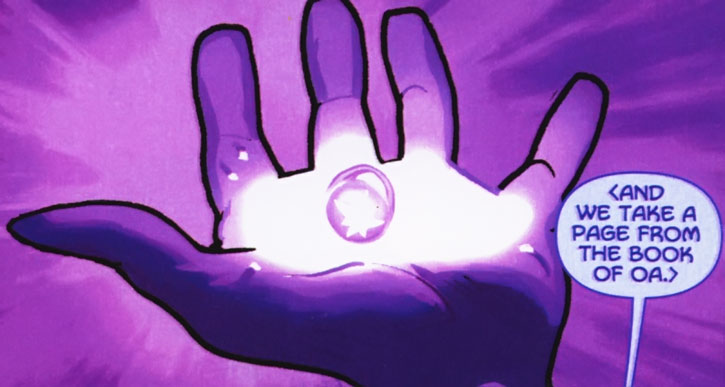 An example of the type of individual normally recruited is Miri Riam. Miri attracted the Violet Ring after the murder of her husband on their honeymoon left her heartbroken and suicidal. The Ring said that the intensity and purity of her love, along with the void created within her was what drew it.

It offered her the option of continuing to her death or allowing the Star Sapphire to fill the hole of her broken heart so her love could continue to battle hate and fear throughout the universe. It took her to Zamaron for her training, at the end of which she could hear everyone who ever loved, and no longer felt alone.

Being near the edge of the emotional spectrum, Violet Power Rings can influence their wielder with the strong or very strong desire to protect and nurture love where they find it. It builds on their natural tendencies to love.

This can be overwhelming for newer wielders, and the Ring will try overwhelm their hosts personality. Carol resisted what she described as her Ring’s attempts to put her on autopilot.

Imprisoning enemies (particularly Sinestro Corps members) in crystals, the Star Sapphires can bombarded them with love in an effort to cure them of their negative emotions and change them into a happier, more loving individual.

This has worked, such as when it converted the Sinestro Corps member Fatality to join the Star Sapphires, although it can take days or weeks.

A target successfully trapped by Crystal Production is subject to Hypnotism, one attack per hour. Each successful attack improves the target’s attitude by one category.

Once the attitude reaches Awestruck, the target gains the Violet Ring’s Serious Irrational Attraction to protecting and spreading love, and female targets may be recruited into the Star Sapphires. 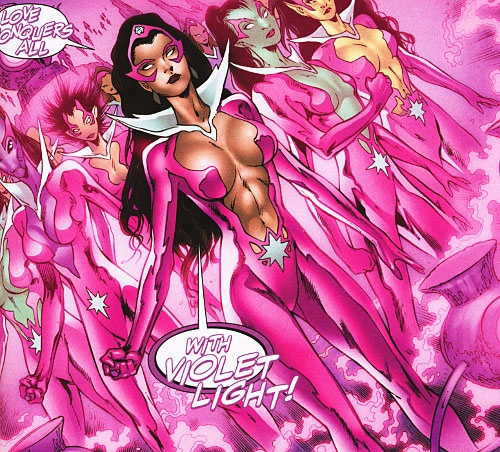