She appeared in early 1969. This was during Jim Steranko’s  highly-regarded run on Captain America, using the striking pop art style he had been developing.

Madame Hydra wasn’t an immediate hit. But she grew in importance over time. Since :

This first entry covers all of her appearances until 1974. This corresponds to just four issues that were actually published during those years.

The bulk of the material is thus flashbacks. This is a “chronconned” profile.

The evil organisation Hydra is central to Madame Hydra’s life. Like, it’s in her name.

Fully explaining what Hydra is takes forever. But here’s the skinny :

Hydra was such a threat that it forced the creation of a (seemingly) unprecedented effort in global law enforcement and counter-intelligence. Namely, S.H.I.E.L.D..

She doesn’t have a heroic level of skill. She’s more on a cinematic level , like a movie action hero. On the other fang, she’s right vicious. And she has access to advanced weaponry.

As the name implies, Madame Hydra is normally accompanied by squads of fanatical Hydra stormtroopers. Some of those will have advanced, exotic weapons.

By this point, she and her troops still have access to a lot of gear, bases, vehicles, weapons, etc. that were left after von Strucker fell.

If you’re familiar with sliding time scales , writeups.org doesn’t use that. It makes it harder for us to clearly explain things, with little benefit.

Instead, we assume that events take place per year of publication. It’s clearer, it doesn’t change much, and it can be “folded” back into a sliding time scale if you prefer those.

For more about those, see our article about ageing in comic books.

Secondary sources  (the Marvel A-Z hardcovers ) have confirmed that Ms. Sarkissian was born in Hungary. This was long suspected, but not established.

She also stated that her parents were killed during a revolution. Leaving her an orphaned street urchin amidst horrible conditions.

Using our proposed chronology, it writes itself. When Ms. Sarkissian was 6, there was a revolution in Hungary to reject the yoke of the Soviet Union.

The battle of Budapest

A popular former Prime Minister, Imre Nagy , formed a government coalition. He tried to negotiate with Moscow so Hungary could be a democracy. 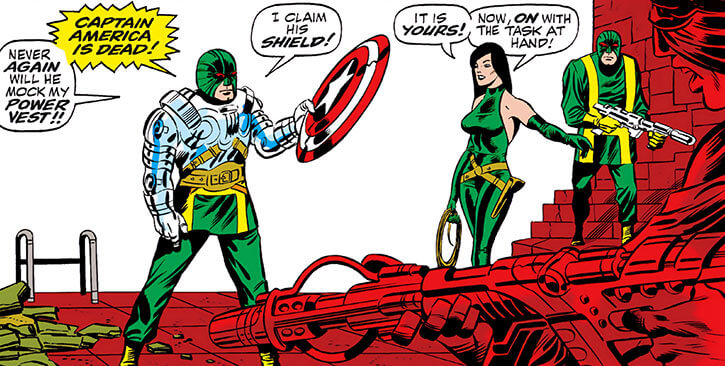 Sarkissian’s parents might have been a couple of university students. Perhaps they were leaders during the student uprising in late October, 1956.

(Radio Free Europe, an American anti-Communist propaganda frequency, had falsely announced that a Hungarian revolution would be supported by the West. This could be used to explain Madame Hydra’s later beef against the US in particular.)

In the History section below I massaged the older accounts to make them compatible with the Hickman version.

The Hickman version also contradicts material that was in secondary sources, including the beloved hardcover Marvel A-Z sourcebooks.

As per our procedure, we assume that Hickman version, which came after the sourcebook, takes precedence over the OHOTMU version.

When Ophelia Sarkissian was a little girl, her parents were murdered during a revolution. She narrowly managed to flee. But she was wounded and disfigured around her right eye.

She survived as a thief and street urchin, with only her smarts to keep her alive. This lasted for months, leaving her traumatised.

She was eventually arrested and transferred to an orphanage.

The great monster of the deeps

By this point — 1957 or so — Hydra was approaching its zenith. One of its most mysterious, feared spymasters was one Daniel Whitehall.

One of his specialities was to develop the potential of special agents. Perhaps his greatest find would be Gorgon (Tomi Shishido).

One of Kraken’s projects involved taking 96 little girls from Hungarian orphanages. He put them all through a gruelling martial arts regimen. Over ten years, they kept training and gradually eliminated each other.

Only the most vicious, determined and ambitious one remained. She was codenamed the Viper.

The next step was a sabbatical of sorts. To spend one year as a freelance mercenary and criminal in Madripoor, an infamous den of scum and villainy.

I am reconciling conflicting accounts by *assuming* that the Viper once mentioning “seeing her sisters defiled” referred to the games of death and betrayal under Kraken. Rather than to literal sisters.

In the Kraken flashbacks, Sarkissian already has dyed her hair green. My sense is that this is not meant to be taken literally.

A “sabbatical” of one year in Madripoor is a *proposed* way to make it all fit together seamlessly. It’s *not* explicitly in the material.

(Well, almost seamlessly. It requires ignoring one caption in Wolverine Vol. 2 #126 stating that Sarkissian wouldn’t become Madame Hydra for years. Use some white-out on that caption and substitute “months”.)

Once upon a time in Madripoor

Viper came to work with a dreaded spymaster and assassin in Madripoor, Seraph.

She thus partnered with an old friend of Seraph, Wolverine (James Howlett). They presumably ran multiple assignments together.

It is possible that Seraph and Wolverine helped further train Viper.

(One could imagine that Kraken had contacts with Romulus, and thus specifically sent the Viper to work under Seraph. But let’s not, since everybody hates Romulus.)

Seraph oddly insisted on joining Viper and Wolverine during one specific mission. The trio clashed with Sabretooth (Victor Creed).

Viper narrowly got Wolverine out, but Seraph seemed mortally wounded. She made Wolverine swear that he would unconditionally agree to one thing Viper would ask of him in the future.

(Seraph returned alive decades later, reinforcing the sense that it was all a deception. Kitty Pryde also hypothesised that Seraph had made Viper swear that the only boon she would ask of Wolverine was marriage.)

Back into the fold

The Viper then rejoined Hydra. Though she was but 18 or so, she was one of Kraken’s protégés. She thus held a high rank, though she wasn’t yet directly under Baron von Strucker.

Predictably, she plotted the elimination of her superiors so as to take over. Since Kraken and von Strucker seemed on good terms, the Baron was presumably cool with this.

In 1967, Colonel Nick Fury pulled an incredible, desperate switcheroo out of his nether regions. This gambit resulted in the detonation of the Death Spore WMD within Hydra’s island base. Which :

No mercy no fear

The Viper was away at that point. As Hydra scrambled to assess the damage, she joined a meeting of other high-ranking survivors. But she had rigged the meeting room. At the touch of a button, she slew them all.

During those decades, Hydra splintered into a multitude of factions, conspiracies and spin-off organisations. The latter included A.I.M., THEM, parts of the Secret Empire, or the Genesis Coalition.

The Viper took over what seemed the largest splinter still operating under the Hydra name. It was the bulk of the surviving personnel and resources in New York. She also changed her code name to Madame Hydra.

Madame Hydra invested in underage recruits, bought from slave trader the Pig. This likely was part of her long-term plans to rebuild Hydra. However, one such transaction was interrupted by the escape of teenager Remy Lebeau, the future Gambit.

In 1969, she and her troops attempted to poison New York City’s water. But they tripped an Avengers alarm. Captain America (Steve Rogers) and Bucky (Rick Jones) responded.

However, Jones lacked training and experience. Though her mass murder plot was foiled, this allowed Madame Hydra to flee.

After this clash, Madame Hydra focused on killing Captain America.

Though the corpse wasn’t found, a funeral ceremony took place.

A funeral for America

The unconscious heroes were smuggled away in coffins. At Madame Hydra’s command, her men started burying them alive in a nearby cemetery.

However, Captain America had faked his death. He came roaring in, riding an explosives-laden motorbike.

Vipers are not what they seem

Back then, unfathomable time manipulator Immortus was plotting against the Avengers. His goal was to avoid the Scarlet Witch (Wanda Maximoff) having children, for complex reasons.

Immortus was using his Space Phantom servants for this. One of them attacked Madame Hydra as she rallied her men to attack Captain America in the cemetery.

However, the Space Phantom’s timing had been terrible. The battle was soon lost. “Madame Hydra” was seemingly slain while trying to kill Rogers and Jones with hunter missiles.

The Space Phantom switched to a new form, the masked Supreme Hydra. He took over the leadership of Madame Hydra’s splinter faction. 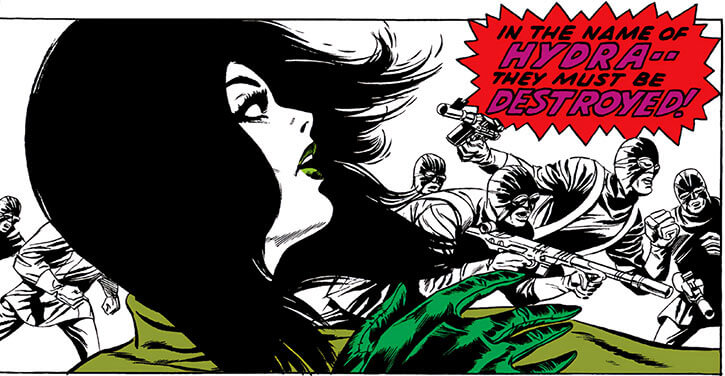 This panel’s lighting and composition was ultra-mega-dramatic even by contemporary Steranko-at-Marvel standards. Which is saying something. Amusingly, years later, Englehart and/or Thomas “explained” what was going on. It was all going white and her eyes were rolled back since it was the very moment when the Space Phantom shunted her to Limbo. Clever, eh ?

What happened to Madame Hydra is unclear. Normally, an individual impersonated by a Space Phantom returns to Earth as soon as the Phantom impersonates somebody else. This doesn’t seem to have been the case here.

Furthermore, time doesn’t pass in Limbo. Still, one gets the impression that her captivity *felt* like years for her, as her personality was different when she returned.

In any case, Madame Hydra did not rejoin her New York troops. They remained under the control of the Space Phantom pretending to be the Supreme Hydra until 1973.

This forced Sarkissian to go underground, until she decided to rise again and fight back.

Madame Hydra’s hair covers the top right of her face in order to hide her scars. This doesn’t seem to hinder her at all when it comes to visual perception, such as aiming a gun.

One gets the impression that the scars were bad at first, but were gradually fixed over the years through the surgery. This also helps explain frequent art goofs where her face seems pristine all over.

As Madame Hydra she took to wearing green lipstick, as a reminder that she and her organisation were one.

At this stage, Madame Hydra comes across more like the unhinged leader of a death cult. Most everything she says or does has to do with killing people. Including any Hydra agent who fails her.

However, she acts in a cold and disciplined manner, and is usually seen shouting orders.

She has a tendency to underestimate youths, such as Rick Jones. This may be overcompensation for seeming pretty young herself.

There’s a vague thing where she seems driven to hatred by her disfigurement (groan — ed.). But it doesn’t even rate as “perfunctory”. And in the accompanying panels her face seems just fine.

“Hail Hydra ! Immortal Hydra ! We shall never be destroyed ! Cut off a limb, and two more shall take its place !”

“You dare speak to *me* of mercy ? Release the ropes ! Let his hands be free ! Now hand him the Hydra warrant of death !”

“Bungler ! Say no more ! He must be found ! The boy himself is of no importance ! But if he should warn Captain America… you pay with your lives !”

The Steranko-era Madame Hydra isn’t too distinctive, except maybe visually. Simply making her a Kobra officer should suffice.

She conceivably could speak Armenian and/or Russian. But it’s a long shot.

The stats are speculative. We don’t see her do much during this brief era. Furthermore, the Kraken retcons  suggest both highballing her stats and adding Skills she logically should have.

Strictly going by period material would result in markedly sparser Skills, and with most Attributes lower by 1 AP. But this here is a chronconned entry.

Since the stats are a bit highballed, the Hero Points are lowballed. To explain why she doesn’t take much direct action during this era. Her HP score may have been higher early on, for instance back in Madripoor. 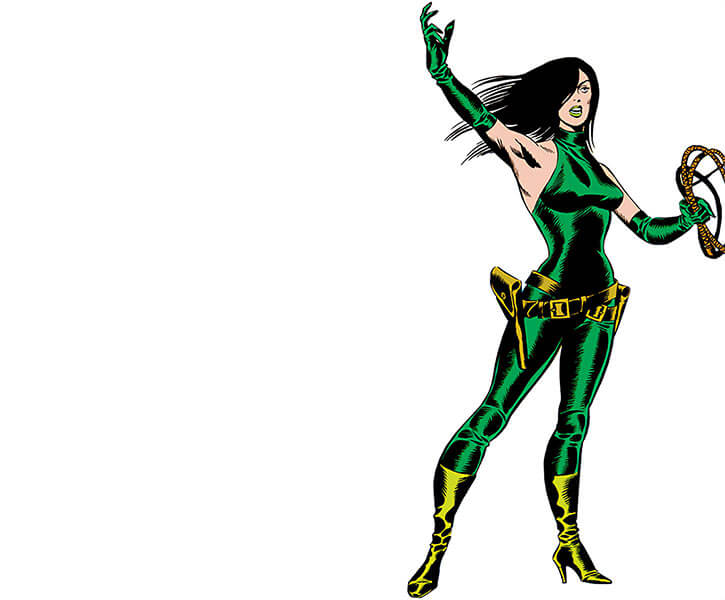 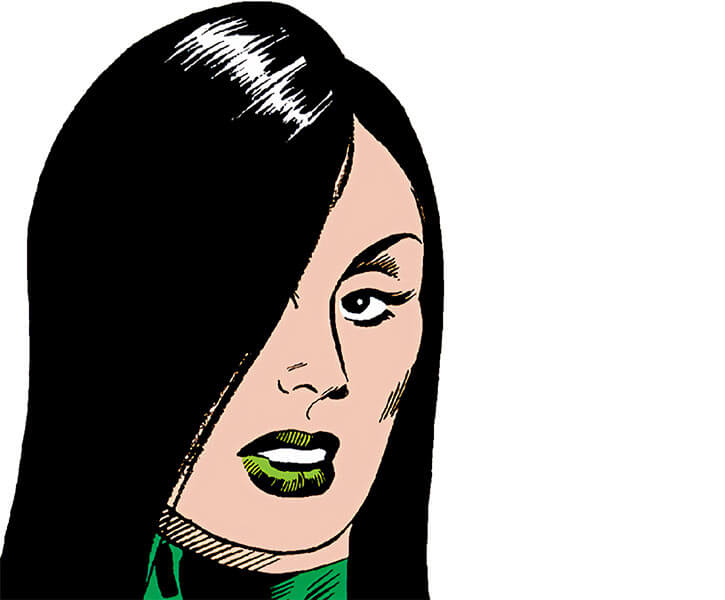 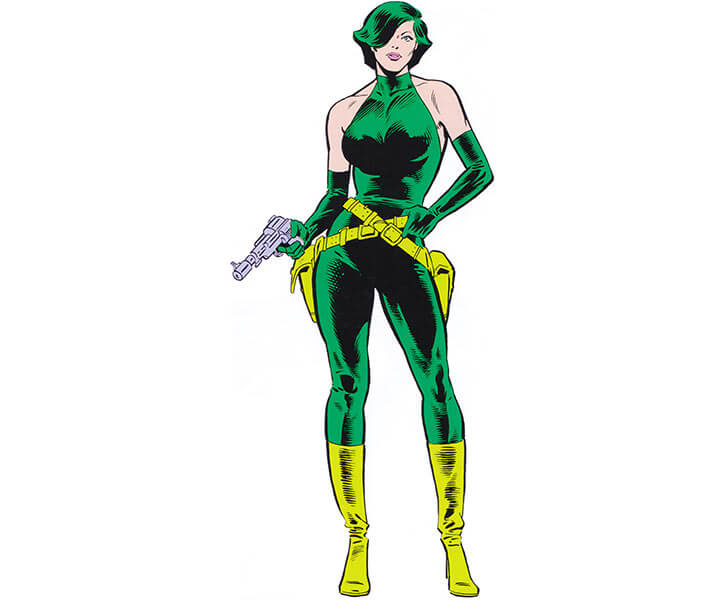