This Viper was a 1970s C-list Marvel Comics villain, with but a brief career.

He wouldn’t be a bad choice to fill out the roster of a villains team. But the chronological window isn’t big (1973/1974).

The Viper returned in 2016. This is not covered in this profile yet. I’m waiting for more information about what happened, and whether this guy truly is Jordan Dixon.

For younger readers (less than 45 or so), the issues where the Viper debuts can be mildly confusing.

The Viper is a trained, fast athlete and hand-to-hand fighter. He clearly isn’t on the Falcon (Sam Wilson)’s level, but once could go the distanceLasting the maximum numbers of rounds in a boxing match against him. Which certainly isn’t easy !

He’s proficient in toxicology, developing his own poisons. 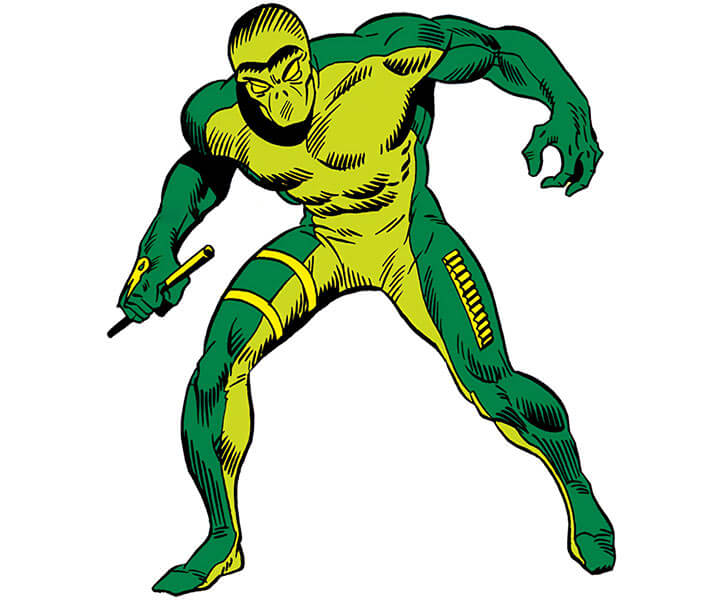 The Viper’s gear is all about poisoning :

The poisons brewed by the Viper are powerful indeed. A single dart would likely have killed the Falcon, or even Captain America (Steve Rogers).

The thrown darts have been blocked by a couch cushion. Yet they also were seen affecting Cap through his uniform. However, how armoured Cap’s costume is often gets… hazy. In this instance, it likely was treated as simple Spandex.

As a Serpent Squad member, the Viper was briefly issued a large weapon shooting liquid venom.

1973 saw the release one of my favourite songs, so that’s a strong chronological marker… for me.

It didn’t chart that high outside of the UK. But it was quite influential in “wait, we’re allowed to do that ?” sort of way.

You can think of it as a distant, retroactive ancestor of trap. After a fashion.

Jordan Stryke worked in advertising during much of the 1960s. This corresponds to the Mad Men era.

During this span he legally changed his name to Jordan Dixon. His brother Leopold Stryke had become infamous during a 1963 atomic bomb scare. Mr. Dixon likely felt his last name now created poor optics for his clients.

He thus worked for several years to create his Viper identity and toxins.

He was recruited by the Cowled Commander (Roger Muldoon) to conduct a crime wave in New York City. The other mercenaries were :

The Commander’s campaign of terror included the bombing of a NYPD precinct house, to kill a police commissioner and Captain America (Steve Rogers). 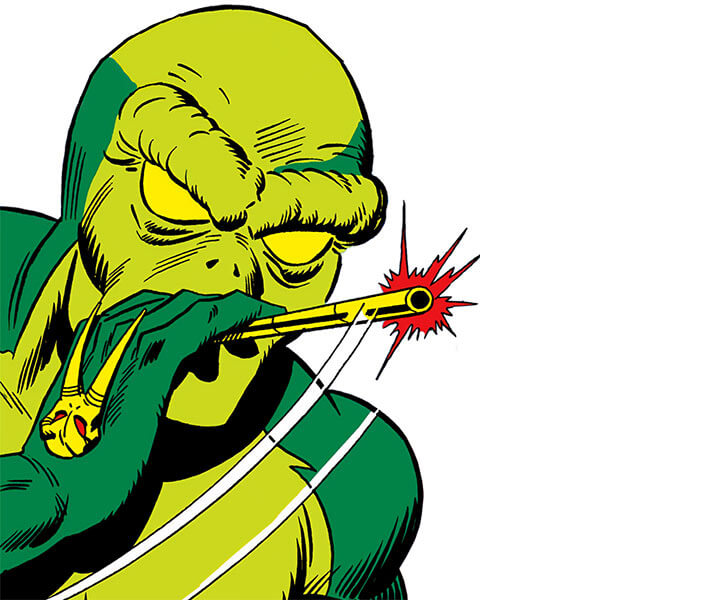 Viper was surveying the blast from a nearby rooftop. He was spotted by the Falcon, whom he narrowly defeated.

Captain America then came in. The Viper also poisoned him, but was forced to leave a vial of antidote behind in order to flee. Both his opponents thus survived.

The Falcon established the Viper’s identity through legwork – based on the supplies needed for his poisons. Mr. Wilson then stormed Mr. Dixon’s place, steamrolled him and captured him.

The Viper told Wilson where the next attack would take place. This allowed the Falcon to reinforce Cap in time. The Commander and his gang were soon defeated by Cap and Falc.

So you’re a tough guy

The brothers did not stay in jail for long. The Cobra (Klaus Voorhees) slipped them spare costumes so they could escape. The trio became the Serpent Squad.

But Dixon and Stryke cared little about Voorhees’ plans. They craved revenge against Captain America and the Falcon. And they convinced the Cobra to go along.

Dixon’s plan was to launch a negative PR campaign against Captain America, run by his partner Harderman for the Secret Empire. But Stryke wanted to attack directly.

The Squad thus launched two direct attacks against Captain America and the Falcon. These failed, and they were imprisoned in the Virginia State Penitentiary.

The Viper’s arrest caused Harderman to launch their prepared PR campaign against Cap. This was done for the benefit of the Secret Empire conspiracy, and using Moonstone (Lloyd Bloch) as muscle.

But after much travails, the Secret Empire was defeated and exposed.

In 1974, the Viper was transferred out of Virginia. Apparently, the goal was to interrogate him about his role in the Secret Empire conspiracy.

However, the former Madame Hydra (Ophelia Sarkissian) had grown interested in the idea of a Serpent Squad. She also needed a new costumed identity, and chose to reclaim the Viper name.

(Unbeknownst to Dixon, this had been her title within Hydra during her youth.)

Ms. Sarkissian (re)adopted the Viper name, and a variant over his dark green costume.

She then falsely claimed that she and the Viper had fought side by side, but that he had been slain by the Marshalls. 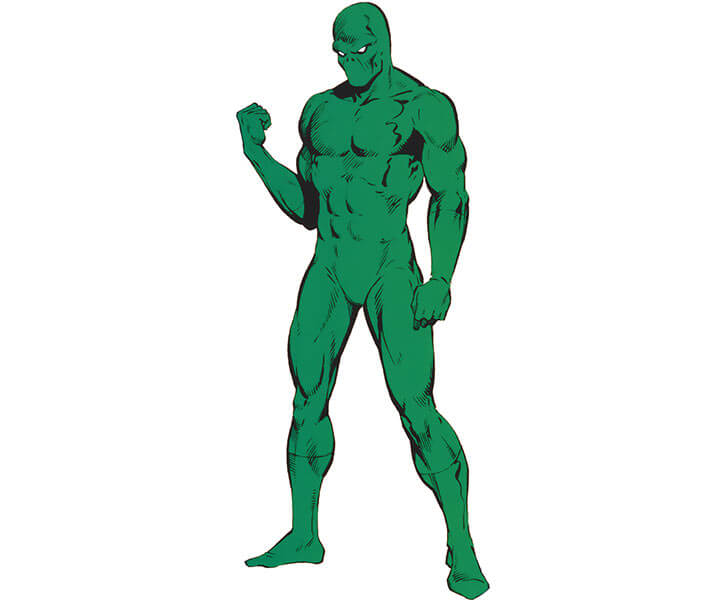 The nigh-featureless pine green costume he died in — and which is therefore in the OHOTMU — is a simplified version of the costume he previously wore.

Presumably it was just a quick, approximative replica the Cobra threw together for appearances’ sake.

Oddly enough, the Viper is *never* seen unmasked. Even in his own home, or in prison. 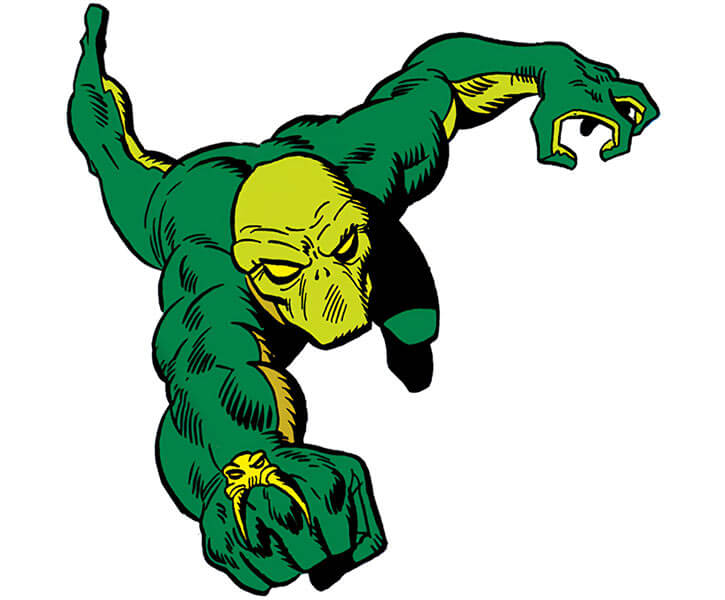 The Viper spent years at the heart of the American advertising system, and burned out in the worst way.

He saw the triumph of unethical practices, of toxic and exploitative industries, the environmental and societal damage, etc. as a new kind of propaganda which was slowly figuring things out.

Dixon thus descended into a quasi-nihilistic disillusionment. Essentially, he hoisted the Jolly Rogers and went along with his murderous, cruel power fantasies.

This coincided with a more general crisis of trust in American society (Watergate, the oil crisis, the war in Việt Nam, etc.).

Buy the world a Coke

Viper went for hyperbolic, bombastic lines. These weren’t unlike the Stan Lee style of thunderous declarations. But they were chiefly a vehicle for referencing famous advertising slogans.

Among these were slogans for cigarettes, which were a mainstay of post-WW2 advertising in the US. The role of cigarettes in the lung cancer epidemic was already known by the 1940s. With his background in toxicology, Dixon may have been aware of this.

He’d thus have seen first-hand how the truth was obscured for decades as millions died for profit. Providing us with one concrete example of why he became radically embittered.

Dixon also was the classic entitled type. He considered that he was the architect behind the advertised products’ every sale, and should earn a far greater share of the moolah.

He also despised the buying public as gullible sheep.

Mr. Dixon was often too immersed in his fantasies of being a super-bad-guy to immediately assess reality. His usual reaction was instead to try and verbally spin the facts to fit his preferred narrative. Rejecting reality and substituting his own.

He wasn’t meaningfully delusional. But he reflexively trusted in the power of confidently lying.

One of his remarks to the Falcon implies that he was a racist.

“Years of research vindicated at last ! Years of mouthing hyperbolic slogans by day — and developing my venoms at night ! Now I’ve left that grey flannel world behind to become the greatest villain who ever lived !”

“You’re a fool, Falcon ! Typical of your demographic segment !”

“We have a saying in the advertising game, Captain America ! You might do well to remember it : ‘Never turn your back on the competition !'”

Gadgetry is limited to toxicology work.

The Hero Points in the stats block are for his peak, during his first appearance.

After the Cowled Commander storyline is over, the Viper never seems to have more than 020 HPs.

This Cobra-made weapon was about the size of a LAW, and shoulder-fired. It shot a stream of liquid toxin.

The Viper seemed to use it Unskilled. He missed a large breach in a wall. Then characteristically made it seem like he totally intended to do that. And he didn’t even try to use the gun in actual combat.

I’m assuming that the Viper wasn’t the one who prepared and placed the bomb during his first appearance. Therefore, no Military science (Demolitions).

Cap #157/158 is a typical example where the villain performs well at first by burning all his Hero Points while the heroes spend little. But once the Falcon finds him, and the Viper has no Hero Points left, he gets curbstomped.

The Viper (and for that matter the Eel) have Multi-Attack 1 on their main ranged attack. This is because Multi-attacks, Trick Shots, Disarming, etc. are often depicted as easier to do in the comics than in games. Since in games, the maths of these Combat Manoeuvres must make sense.

The darts and fangs could have their own EV, Combined with Poison Touch. But it would be 01 and 02 or so. So rolling them would be a waste of time in most situations. If a target is weak enough to take EV RAPs, they’ll get obliterated by the Poison Touch anyway (barring Systemic Antidote APs).

His mask *might* include light respiratory filters. This might explain why he wears his mask whilst working with dangerous chemicals. But it’s an unsubstantiated hypothesis.