Visionary has the ability to project potent beams of concussive force from his eyes. Despite his calling this power his laser vision, the beams don’t act that way. They don’t appear to generate heat or radiation, and are quite spectacular to view. They produce light in the yellow spectrum.

In addition, Visionary has telescopic vision rivalling that of an eagle, and the ability to see through any substance that he has encountered thus far.

The Aquarium’s resources include equipment with which Warner can monitor the police radio for watch words that trigger an alert to the team of a possible emergency.It also allows her to summon, monitor, and communicate with members of the team during engagements with hostile forces.

The team also uses a teleportation device called the Jump Station. It allows them to travel instantly across the continent to meet with one another. The team can activate the Jump Station by manipulating a device on their costumes.

The Jump Station can only transport persons from the station itself to another location and back, but not effect transportation directly between two other locations.

Captain Dynamo, the much-beloved superhero protector of Tower City, was murdered. His widow, former government agent posing as a now-retired investigative reporter Maddie Warner, went through his personal effects. She thus discovered that he had been unfaithful to her countless times.

Despite her devastation at this discovery, Warner realized that without a full-time protector, Tower City would be vulnerable to Captain Dynamo’s legion of super-villain enemies. She used her skills and the information she discovered to track down five individuals. Each could have been her late husband’s illegitimate children. The first was a young man named Hector Chang.

Hector was a resident of Vancouver British Columbia when Maddie first found him. He was a relatively normal 15 year old who lived with his mother. He went to the Dominic Da Vinci High School. This shy young man was first approached by Maddie immediately after having an encounter with the local school bully.

Maddie told Hector of his unique lineage. She eventually convinced him to meet with his other siblings in Captain Dynamo’s secret base, located in Tower City.

When the group of five strangers came together, Hector initially refrained from mingling with his older siblings. Instead, he found himself engrossed with the advanced technology within Captain Dynamo’s base of operations. However, the five were suddenly exposed to a high dose of the same unidentified radiation that gave Captain Dynamo his powers 40 years earlier.

The radiation immediately unlocked their latent powers. Hector inherited his father’s vision based powers. He took the codename Visionary and with his new found siblings formed the group, the Dynamo 5 in order to protect Tower City.

Hector participated in several adventures during the early days of his career. The team battered away at the criminal element that rose in Tower City immediately after Captain Dynamo’s death. During this time, the once shy and timid young man grew in confidence. He even attempted to stand up to his school’s bully on occasion.

It was around this time that Hector’s mother discovered Hector’s dual identity. She was shocked to discover the true identity of his biological father. Captain Dynamo had taken the likeness of an Asian-American man during their encounter, and thus she never suspected.

Furious at this and the fact that Maddie had put her child in danger she demanded to confront her. Ms. Chang inadvertently nearly caused the team its worst defeat.

It was this near disaster, along with Maddie being rendered comatose and his brother Spencer’s alien nature being revealed, that split the group up. Hector returned to his home life. But he felt guilty that his sister Bridget had created a new Dynamo 5 to protect Tower City and was still fighting the good fight. 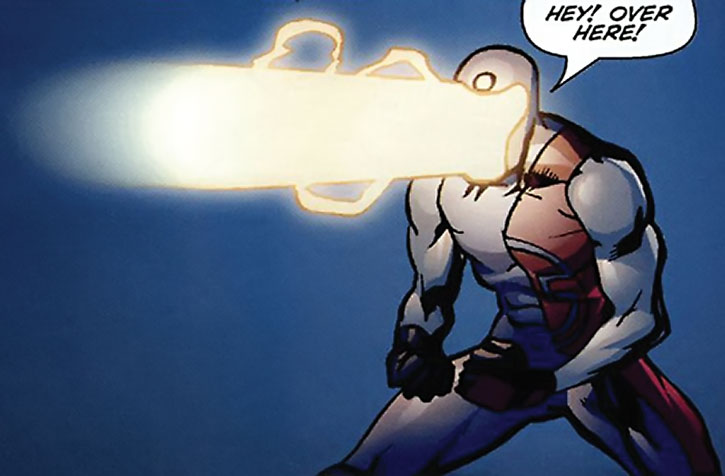 Unfortunately, the new Dynamo 5 eventually drew the ire of a combined force of past enemies. The new team was quickly defeated and Bridget faced certain death. But sensing her need Gage quickly assembled their siblings, including Hector, and raced to her aid.

With the original team reunited, the Dyamo 5 made quick work of the combined force of villains.

Hector is a short, skinny young Asian man. He dresses like a typical teenager when not in costume. His costume is made up of a one piece blue and red shoulder-less leotard with a highly stylized D5 near the center of his torso, and left his slim arms bare.

He also wears a blue helmet that has a unique golden visor that slides down and covers his entire face, completely obscuring his features.

Hector was a shy and uncertain young man who is growing up quickly. He still lives with his mother, and loves her dearly. In fact, of all the Dynamo siblings, he’s the closest to his mother, most likely due to the fact that she raised him on her own.

He accepts authority and instruction easily, especially from the women in his life, and he tries to be one of the boys.

He is open and nearly completely honest. When his brother Gage questioned him about his lack of sexual experience, Hector reluctantly told him the truth. Then again, when your brother can read your mind, I guess you don’t have much of a choice.

In his heroic identity, Hector has an air of confidence. Like anyone who has been bullied, Hector wants to confront his tormentors, but thus far has resisted the temptation. He knows that with his powers that his human tormenters could be gravely injured.

“Maybe… but this visor isn’t just for decoration. It helps to focus my blasts, makes them more concentrated. Which gives me an advantage !”

“I know, dad was just some guy who got you pregnant that you never saw again. It’s okay, mom. I’m glad you told me the truth about it.”

“I guess I should just show you. I’m a super-hero mom.”

“Tower City’s under OUR protection now !”

“Hold on… you’re not the only one who can finish off the bad guy, you know ? Let the other kids play.”

“Mom, they’re right. If Livvie’s dad’s in trouble, we’re gonna help. All of us.”

The Dynamo five can be dropped wholesale into the DC universe as is. Tower City can be yet another fictional city within the DC USA. More interestingly though, each of the siblings could have been the illegitimate offspring of a certain Martian in a less cordial campaign. 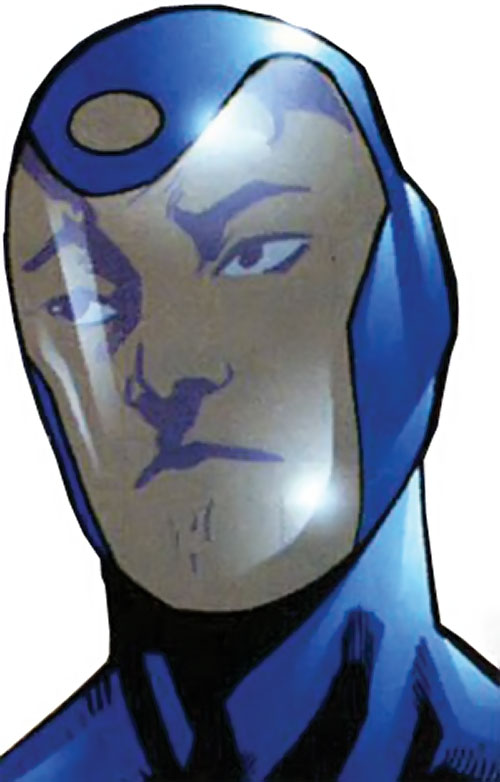 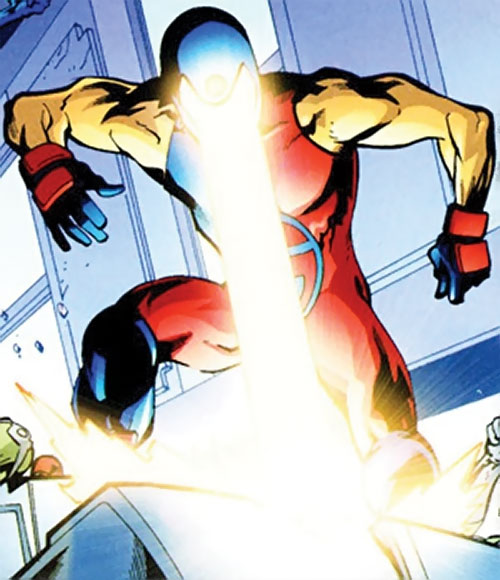 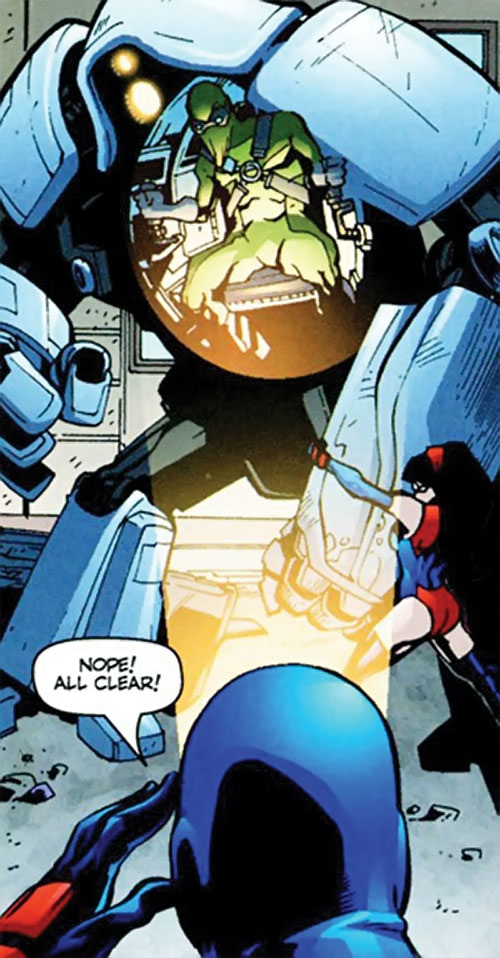 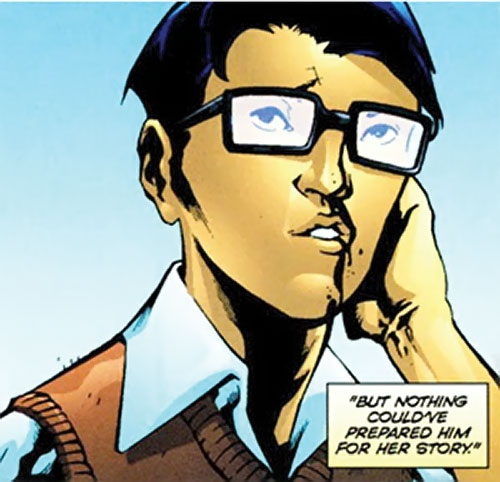 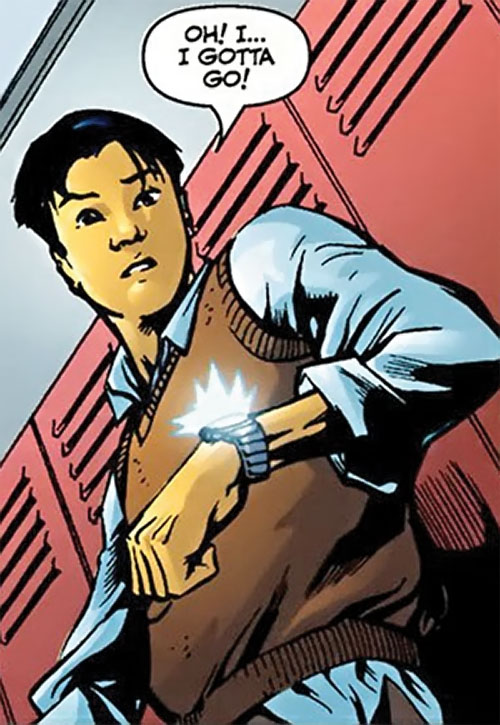