As Void, he has the ability to access a strange subdimension of Earth known as The Void. Which allows him to accomplish a number of superhuman effects.

He can instantly teleport objects or even people from one of his hands to the other. When people are teleported in this manner they are temporarily disoriented both from their shift in space and their brief brush with The Void. He may banish targets to The Void, or to the Earth Dimension  if both he and the target are in The Void.

Void may attempt to reflect incoming missile weapon attacks by teleporting the missile upon contact and causing it to emerge from The Void traveling away from the villain and toward his attacker.

In addition, he may travel between The Void and the Earth Dimension as long as he is in his super-powered form.

While in his Void form, McBryde seems unaffected by his advanced years becoming both considerably stronger and quicker : he acquitted himself well in his two sparring matches with The Batman.

McBryde’s Void form has a finite time limit, however. Unless he once again touches tattoos with Solomon, he will revert to his non-powered form after 7 APs (10 minutes) of time has elapsed.

Peter McBryde is an extremely active man for his years boasting an above average agility. He is a master of verbal interplay and an accomplished pickpocket.

It should be noted that Bruce Wayne recognizes McBryde and the two men called each other by their first names at one point during the second Null and Void story. The implication is that the two men travel in the same circles and could suggest that McBryde deserves the Connoisseur Advantage.

In his Void form, McBryde is a strange-looking pale yellow figure. His face, arms, and upper body are covered in weird horizontal and vertical lines like striated musculature. These striated portions of his anatomy are pale green, violet, blue, and orange. No discernible costume adorns his muscular frame.

As McBryde, he favors expensive suits. He has a thin mustache and a debonair manner.

His best friend Sol characterized McBryde as a first-class rogue and that he is. He commits crimes not for the money but for the thrill he derives from challenging himself. His need for excitement is an almost pathological obsession. Even in his non- powered form he takes needless risks and as Void he embarks on such risky endeavors as stealing from Superman and sparring with Batman.

McBryde has a strange sense of honor and will not commit bloodshed. During his first encounter with Superman and Batman, he saved not only the lives of a group of orphans but the Dark Knight Detective’s life, as well.

After his betrayal by Null he threw in with the would-be world conqueror X’ult rather quickly. This may indicate the beginnings of a new, more sinister Void.

“I prefer the excitement of the unknown to the certainty of a prison cell !”

Parts of the two Null and Void / World’s Finest Heroes encounters are, at best, unlikely in the post-Crisis DC Universe. But the pair could still be easily updated to fall in line with current continuity. This would require either removing the wartime portion of their origin or granting them a Reduced Aging Advantage.

Void, and his reluctant partner Null, present a perfect opportunity to run a straightforward “Audacious Theft” style adventure. McBryde, in particular, is a fun, freewheeling rogue who would make an excellent foil for any overly dour PC.

Note:
Presumably, by the end of their second encounter with Superman and Batman, Void and Null have lost their Secret Identity Drawbacks.

As always, heights and weights are best guesses.

I have chosen not to give Void either the Strange or Distinct Appearance Drawbacks as the normal humans that encounter him believe he is in a costume. As a result, and as far as the MEGS rules are concerned, he does not reap any benefit or suffer any hindrance because of his weird appearance.

During their second encounter with the World’s Finest team, Batman used his own body as a conduit for the transformation when Null and Swordfish could not quite reach each other.

If any character attempts this conduit maneuver they are jolted by an immense release of power. Treat this as a Bashing Combat Physical Attack with an AV / EV of 7 / 7 and an OV / RV of the conduit character’s Bod / Bod. The Attack appears to be energy-based and it is up to the GM’s discretion whether Energy Absorption might be used to avoid this damage.

The subdimension of Earth that McBryde has named The Void is a strange limbo  land of swirling colors and disturbing images dotted by weird floating islands of sold rock. So unnerving is the sensory input of The Void that it nearly overwhelms a temporarily banished Superman.

Both X’ult and McBryde / Void seem to be immune to the effects of The Void.

The Void is at a Travel Distance of 1 from the Earth Dimension. 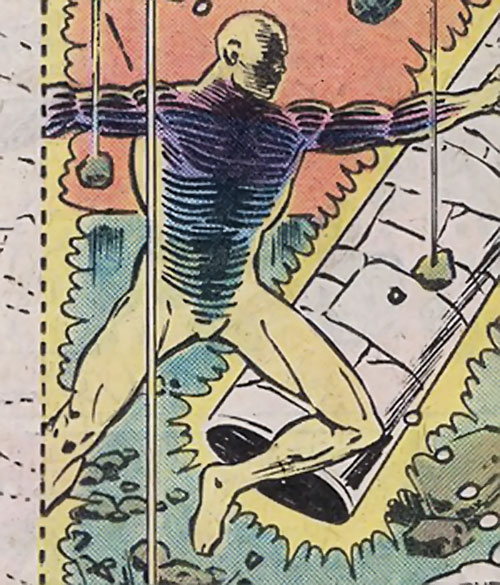