“I can just switch off my Voidoid suit… and become somebody no one would look twice at… somebody closer to the Fury than he could ever dream !”

The real identity of Voidoid was never revealed. But it seems he was a close friend of the Fury in his civilian identity and knew his secret. Since there is no information, the only game stats are for the character in non-alter-ego mode.

His civilian identity’s clothes were reminiscent of Flash Thompson. And the theme of the friend who is a terrible opponent is reminiscent of Harry Osborn.

Once he turns on the Voidoid suit, he becomes a quite large white silhouette gifted with superhuman strength. He is in fact so strong that the Fury cannot risk engaging him in hand-to-hand combat.

The Voidoid is immune to projectiles, and to punches or kicks. These will just pass right through him. He can interact normally with slow-moving and stationary items, though, and somehow has no problem punching even fast-moving targets.

When he was seen, he had an arsenal of high-tech weapons. Those are not part of his normal modus operandi – though he seems handy with firearms.

The Voidoid seems to be the main villain opposing the Fury, and the one who keeps escaping the supposedly inescapable young hero. When we see him fighting the Fury, “comrades” have provided him with advanced weapons. These apparently come from the early Wildstorm Universe of the 1990s. 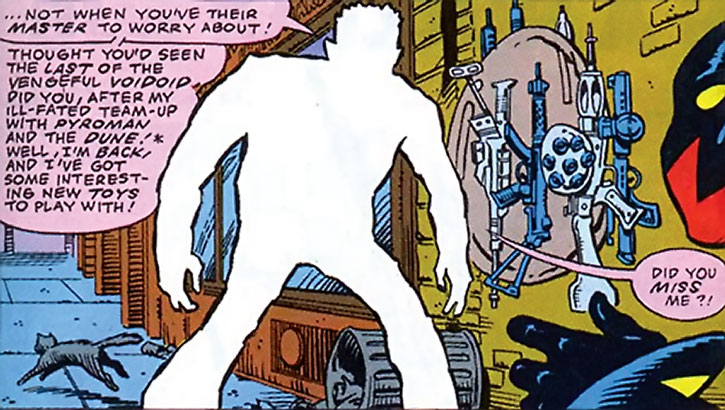 The Voidoid engaged the Fury fairly successfully until their fight was interrupted by the Warbeast. Warbeast attacked Voidoid when he panicked and tried to shoot the dinosaur with an energy rifle.

Voidoid wounded the monster, who returned fire with a mind blast that took Voidoid out.

However, Voidoid recovered while the Fury and L.A.S.E.R. were still fighting Warbeast. The villain deactivated his special suit and sneaked away in the crowd.

Hard to say beyond the quotes.

“Ha ha ha ! Have you forgotten so soon, you skyline-scuttling simpleton ?! My Voidoid suit warps space in such a way that any moving projectile passes right through me !”

“Ha ha ha ha ! Getting nervous, my little jumping jack ? You must be wondering how I’m tracking your unpredictable movements so well ! The answer lies in this remarkable helmet !”

“Ha ! Where are your jokes now ? Where is your mockery ?! Why, you wet-nosed little squirt, I’ll beat you to a pulp ! I’ll break every bone in your body !”

Connections:
Underworld (Low), Threatening Three (Low – the other two are the Dune and Pyroman. These may be analogues of the Sandman and the Molten Man). 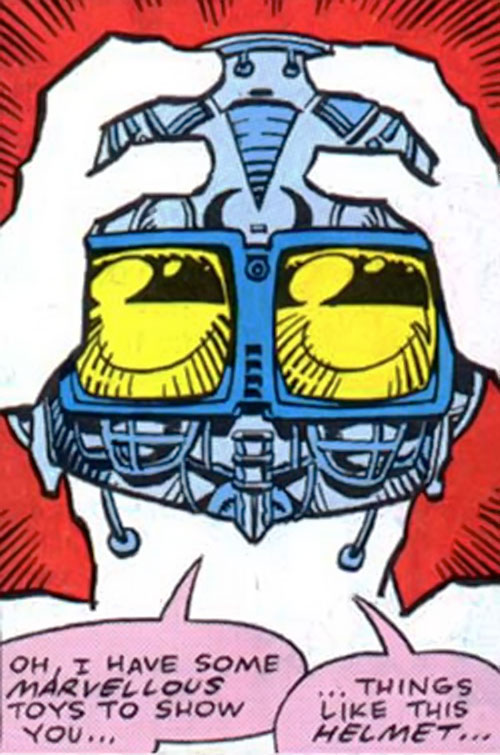