In COTU#32, the Challs had previously encountered Volcano Men. This issue, they encounter two who merge into one. One of the Challs tries using a CO2 fire extinguisher on Volcano Man, but the CO2 is “baked into a solid”.

When liquid oxygen is used on him, there is an explosion (affecting Challs and Volcano Man alike— a little). When immersed in water, Volcano Man suffers pain for a short while, then recovers from the initial shock. (A one-turn Fatal Vulnerability ? That is, he takes only one point of damage ?)

They beat him by using bursts of liquid oxygen near Volcano Man to keep the CO2 cool enough that it won’t bake. Volcano Man is covered in CO2 foam and crumbles into a pile of hot ashes.

In COTU#34, Drabny digs through tons of volcanic rock to find Volcano Man, not dead after all. He is given his Thermo Belt (invented by Kra) by Drabny. Volcano Man joins the LoCH.

He’s a large mass of lava in human form. He is about 15 feet tall.

Bonuses and Limitations:
Growth is Always On and is reflected in the above stats.

Drawbacks:
CPR: Can’t speak. (just says “Hisss !”), Misc: As a being made out of lava, Volcano Man has weaknesses to attacks that would affect lava. However, a character needs Scientist to figure out how to take advantage of this (see rules under the description of the Scientist skill).

Equipment:
Thermo Belt [BODY 05, Flame Immunity: 12 (Only itself), Neutralize: 12 (only on Flame Being and DEX ; can regulate the temperature so that Flame Being can be anywhere from 0 to 12 APs. In addition, one button on the front of the belt can be used to paralyze Volcano Man as well as turning off the heat).]

Source of Character: DC Comics (Challengers of the Unknown). 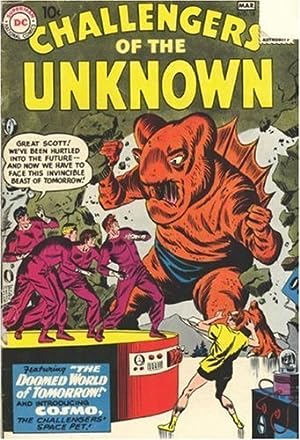