Two brothers locked in deadly combat till the end of time !

Hawk’s evil brother. The main antagonist in the 1980 Hawk the Slayer movie.

He was played by Jack Palance  , a veteran actor with an interesting career.

Voltan’s strength is near-superhuman. He’s able to break a man’s neck with a squeeze of his hand.

He’s extremely quick with daggers. He can draw and throw so fast his movements are imperceptible.

He’s trained with most weapons and accomplished at field command.

Voltan’s army of mercenary soldiers totals more than 60 but less than 100. 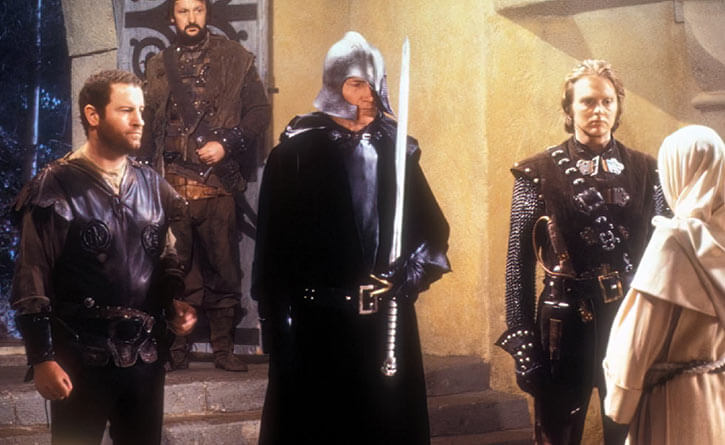 See the Hawk character profile for details on Voltan, his past, and his world.

An imposing figure at over six feet, looking older than he should.

Voltan prefers black clothing and silvered helm. He carries a sword with a skull-shaped pommel. 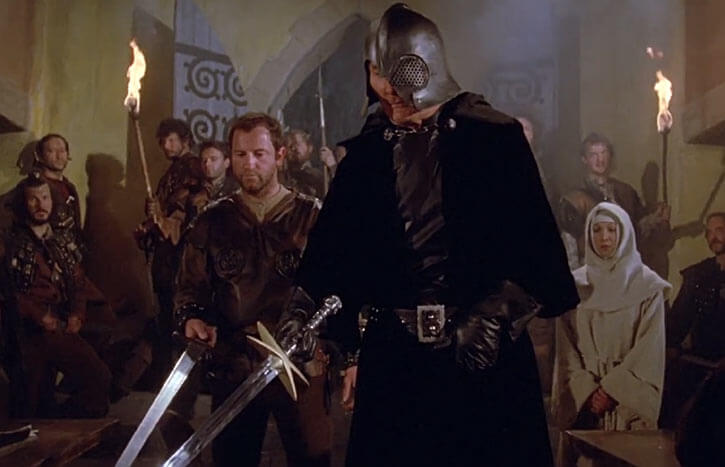 His temperament is grim. Quite the opposite of his stoic and emotionless little brother.

Voltan believes everything belongs to him or is owed to him. Nothing is ever his fault.

He enjoys goading his prisoners before killing them.

Anyone who’s seen Jack Palance  in action can picture the over-dramatic, open-mouthed, “Aha!”.

A character with but two motivations

First, he’s evil. His pursuits of power are for the end goal of hurting others.

Second, Voltan seeks relief from the pain of his scarred face.

Wizard: “Enter Dark One.”
Voltan: “The pain – it gets worse. Each time it gets worse.”
Wizard: “Your face does not heal. A strange malady affects the flesh. It is beyond all skill… to render a permanent cure. Steel yourself !” (Painfully applies healing magic)

“First, you took the woman I love. Then you slew my son. Your death will be slow and painful as will be your friends. You will know how I have suffered through the years with a face that no woman would look upon. Forcing me to take another man’s child to call my own.” 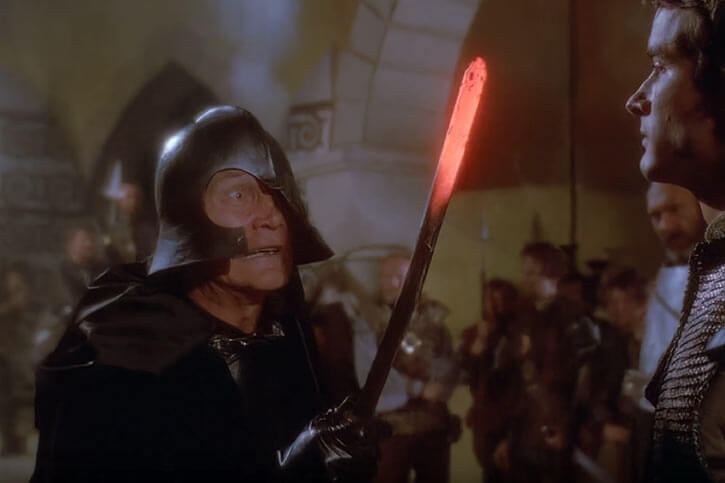 Serious Irrational Hatred of Hawk, Traumatic Flashback (Receiving the burn wound).
Miscellaneous: Cannot Heal (Voltan has a permanent -1 AP to his Body score due to the wound on his face. It can’t heal naturally and causes Voltan intense pain. Magical healing can remove the damage, but it returns in 48 hours or when he receives 1 RAP of Physical damage).

The men who work for Voltan are real scum. They thoroughly enjoy hacking down innocent women and children.

Voltan will have a minimum of four of these men accompanying him on any mission.

The loadout for individuals can vary. Most carried swords and daggers, a few had crossbows. One in four will wear chainmail, the rest in light leather.
All are standard equipment and can be found in Worg’s weapon locker articles.
When needed, every man gets his own horse.

Source of Character: The 1980 movie Hawk the Slayer, character portrayed by Jack Palance.