Hallowed be thy name

Beyond the aforementioned Nazi fixation, another recurrent problem for German characters in US comics are the inappropriate (“Blitzkrieg”) or poorly translated names. The character at hand is a textbook example. Here’s a quick summary :

Freiheitskämpfer seems to be a highly trained spy and special agent. He displays superior athletic and combative prowess. He could engage the Red Skull in combat (with the Skull having a cloned Steve Rogers body) or fight a cautious Captain America for a bit, but was visibly outclassed by the redoubtable Crossbones. He’s an excellent acrobat.

Ettlinger is physically very robust, and can derive energy from impacts against his body. He will react to the mass behind the attack (for instance a heavy man kicking him will push him back), but attacks such as bullets and arrows will uselessly crash against his body.

Freiheitskämpfer can use the energy from such impacts to enhance his own strength and speed for a bit. So far, this ability has only been demonstrated with force-based impacts rather than, say, heat or electromagnetic energies.

He was also seen using kinetic energy to quickly expand a soft force field around him to repel civilians, knocking them on their behinds. But this seems to be a minor effect that wouldn’t be useful in a real fight.

A much deadlier attack was used when Every-Man attempted to stab him in the chest. Freiheitskämpfer redirected the lethal force of the thrust straight into his foe’s heart, killing him on the spot. In DC Heroes RPG terms Ettlinger probably can return attacks as a Mental Blast rather than Claws or Shockwave, but that has yet to be demonstrated in a comic.

Freiheitskämpfer could within seconds identify the Red Skull’s body as the corpse of an undisguised human who had died within the last hour. While this could be part of his training as an agent, this profile assumes that he was originally some sort of doctor, probably a coroner. Authorial intent may have been to hint that he’s a policeman, though.

Secondary sources list Kommando Spezialkräfte training — the German equivalent to the SAS — which may indicate that he’s actually an elite soldier. But perhaps he simply received training from KSK instructors.

Freiheitskämpfer is a patriotically-clad German hero who seems to have ties with the German Federal government. He may be an official agent of his country. In the early 1990s he introduced himself as “the new national hero of united Germany”, which hints at government backing.

Secondary sources indicate that he was granted his powers through genetic experiments, without further details.

He met with Captain America during an international operation to capture the foremost living war criminal, the Red Skull. At that point he was the apparent leader of the Helden-Liga, a team of costumed German superhumans.

Freiheitskämpfer and his team located an Arnim Zola secret fortress in Switzerland, where spare clone bodies of the Red Skull were stored.

They destroyed the installation and vanished. This cut off Red Skull’s ability to just transfer his consciousness into a new clone to escape. Freiheitskämpfer then closely monitored the Skull, using a variety of disguises and covers to observe him and prepare his arrest.

Eventually he infiltrated Taskmaster’s Academy to impersonate and replace a mediocre “student” there. The trainee was scheduled to be sent to his death in a fighting workout with the Skull.

When the Skull attacked, the German hero grabbed him and teleported out of the Academy.

(Ettlinger indicated that the German authorities intended to execute the Skull after a quick show trial. This is… puzzling since death penalty was abolished in Germany in 1949 and the historical precedent at Nuremberg were actual trials with a full defence.
Though it is possible that Earth-616  Germany is very different from our own, the differences almost always seem to stem from poor research rather than intent, so this part is probably best disregarded.)

The German flew toward Europe with the captive Skull. He slyly let the Nazi activate a hidden transmitter, in the hope of drawing his minions into a trap and capture them too.

As planned, the Skull’s support team, the Skeleton Crew (Crossbones, Machinesmith, Mother Night and a Sleeper robot) stormed the Berlin base where their employer was held.

Freiheitskämpfer and Generator engaged them. Though Crossbones briefly gained the upper hand against Freiheitskämpfer, Zeitgeist was working unseen, ensuring the victory of the Liga. The German government now held the Skull plus the Skeleton Crew. 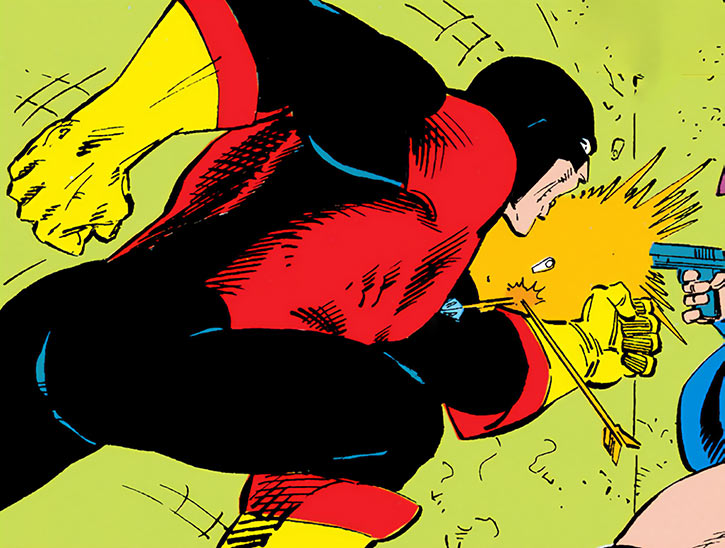 The Machinesmith managed to break his bonds. Meanwhile the Skull claimed that he was not the original Red Skull but an American terrorist without ties to any version of Germany. At this point the Avengers intervened, confirming that all captives were American citizens and Germany had no authority over them.

Captain America further confirmed that the real Skull was dead, and the Avengers left with the prisoners.

This was all a ploy – the “Avengers” were bioplastoids sent in by Arnim Zola after Machinesmith contacted him. Their Quinjet was actually the artificial shape-changer Doughboy. The Skull and the Skeleton Crew flew away laughing.

Within hours, Freiheitskämpfer realised that something was wrong when he checked with the real Captain America. He immediately flew back to Washington to raid the Skull’s current base before he could move to a new one.

Captain America had the same idea, and the German assumed that the American was the bioplastoid he had encountered in Berlin. As they fought, Freiheitskämpfer realised that he was wasting time. He swiftly jumped away and rappelled down into the Skull’s office.

He was too late – the Skull had already faked his assassination, and that of the Skeleton Crew, using bio-duplicates provided by Arnim Zola.

The Helden-Liga was later seen investigating — for unknown reasons — a string of murders of superhumans in South America and Central America. Generator was himself murdered by the serial killer, but Zeitgeist found a lead. It took them to the US and a purported assassination attempt against the Angel (Thomas Halloway) – the first super-hero of the modern age.

Freiheitskämpfer again met with Captain America, who was present at a reception given to honour wartime super-heroes such as the Angel. Both the German and the American discovered that, inexplicably, Zeitgeist had been a traitor all along and was the serial killer. Furthermore he actually was the psychotic American villain previously called the Every-Man.

When Everyman ran into Freiheitskämpfer he attempted to stab him with his sword, his former colleague redirected the force of the thrust in his foe’s heart, killing the killer for his betrayal and the murder of Generator.

Freiheitskämpfer is one of those flag-wearing superheroes. In his case of a German hero the colours are neutral enough that it could pass for an ordinary super-hero costume if onlookers are not familiar with the German tricolour.

Freiheitskämpfer is a skilled professional. However he comes across as pompous, proud and overconfident to the point of arrogance. He seems very concerned with not making a mistake and never looking bad, presumably because he feels that he represents his country.

Freiheitskämpfer was depicted as both being unsure of usage among the super-hero community (since he’s new at it) and having a vengeful, murderous streak if he feels betrayed. The latter is particularly odd is he’s meant to represent modern Germany.

“My name is [Freiheitskämpfer] ! It is just you know the name of your enemy ! And be sure that any ally of the Red Skull is an enemy of mine.”

“I feel responsible for his killing spree. He was my teammate. I should have done a more thorough background check on him.”

Bonuses and Limitations:
Accuracy is a Powered Skill.

Equipment:
Freiheitskämpfer is occasionally outfitted with a harness holding a number of weapons. Demonstrated assets include :

Freiheitskämpfer has but few appearances, and our game stats are clearly tentative. For now they err on the conservative side, but they may easily be higher – except for the combat stats, which can be assessed correctly. 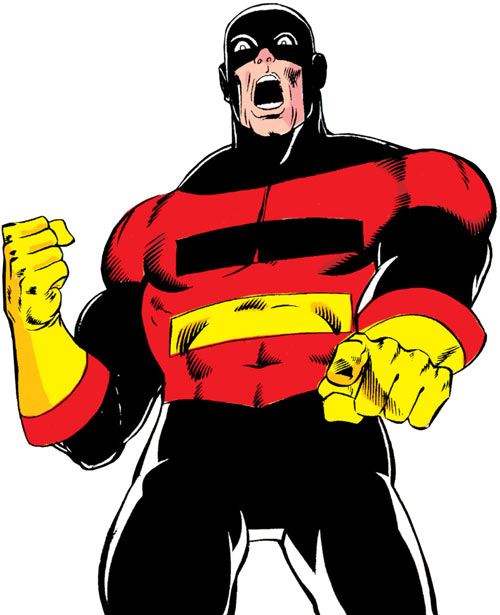 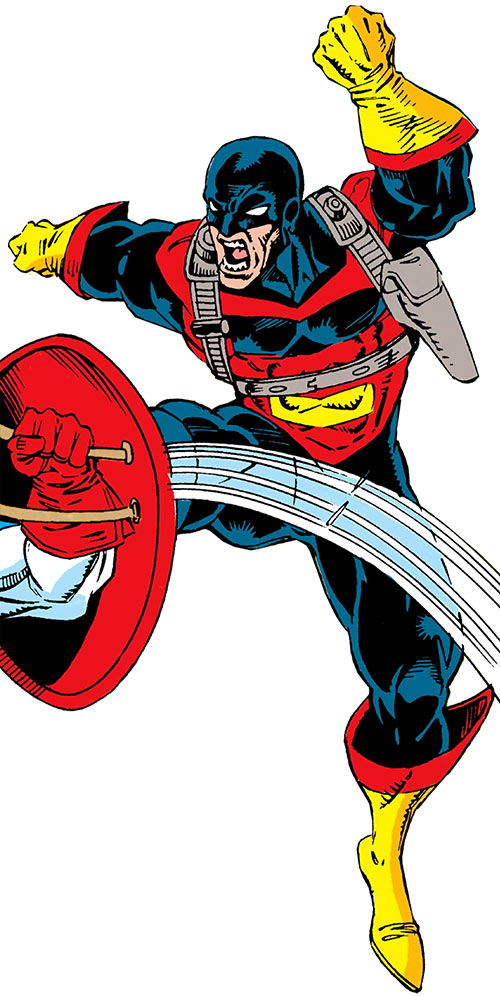 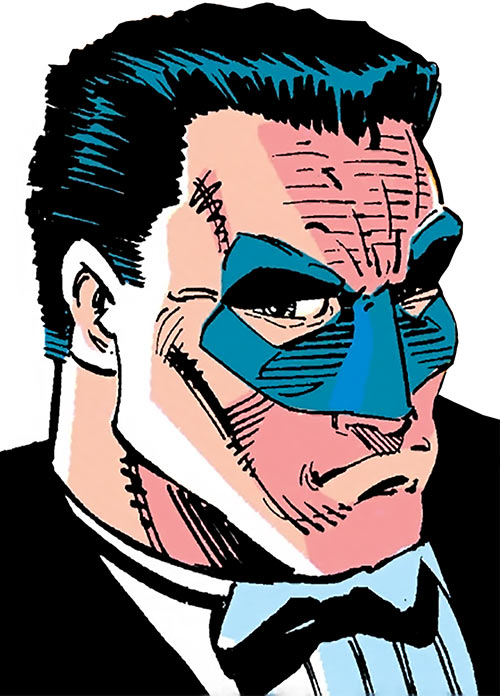