Vril, the Power of the Coming Race by Edward Bulwer-Lytton was published in 1871. It is one of the many wild-eyed tales of occult conspiracies, secret underground civilisation, master race, hidden civilisation, magical psychic energy (the “vril”), etc. etc.. You know the type.

It could also be seen as an ancestor to the Shaver Mystery .

Nowadays this sort of paranoid delirium is more about a fantasised version of politics. Back then, the inability to understand the world was couched in more occult terms, and so the Vril stuff was popular with the likes of the Theosophists , and from there the Nazis.

This entry describes the magical equipment features in the novel.

To state the obvious, avoid reading the book at all costs. One gets the impression that there’s some sort of memetic virus floating in it that eats away at the brains of those who do read it. Or, it may just be old age creeping up. Either way, I hope you appreciate my sacrifice…

Vril is, in essence, theoretically able to do anything, provided the wielder has the imagination and skill enough to control it.

In practice, however, it is far more limited, generally to four “spheres of influence” that the energy can most easily preside over: Destruction, Healing, Protection, and Manipulation. And, as it turns out, different sorts of people tend to have differing affinities for these spheres.

Generally speaking, children tend to be more effective in Destruction, while craftsmen often excel at Manipulation, and women tend to be good at Healing. While we never see it, one can assume a subset of the remaining population are handier with Protection. In DC Heroes terms, this is defined by the Special Link Attributes described above.

Supposedly, manipulation of vril is only possible by those of a certain heredity, and is essentially inborn. In the hands of anyone else, no matter how well trained, the effects are negligible at best, and unreliable and dangerous at worst.

As far as can be determined, these wings and their associated apparatus reduce the effect of gravity on the wearer. They thus permit him to fly, even in enclosed spaces.

In cases of extreme precision, the wearer can also use the wings to create breezes to help or hinder others, both in flight and on the ground.

The vril staff is about the size of a walking staff (though a sliding mechanism exists to shrink or expand it), but hollow. There are several buttons or “keys” in the handle, with which the vril energy is manipulated.

As described above, different people have different leanings as to which sphere of influence they are best with. These differing capabilities are reflected in the staves they receive by differing key combinations. This allow them to more effectively leverage their native skills.

When in use, the upper portion of the staff usually rests across the “unfavored” palm for stability in aim.

A graceful mantle made from the feathers of a gigantic underground bird. The wings of the Vril-ya are primarily white, though red streaks are occasionally found (dependant, of course, on the source bird). Generally crossing above the waist when not in use, the wings hang down to just below the knee.

Around the shoulder, they are fastened with strong, lightweight, steel springs. These can quickly expand the wings to full span (though intermediate positions can be achieved through muscular action), at around eight feet. When extended, fabric loops can be found on the underside, designed for placement of the arms, and strengthening them across.

Replacement of the arms also reveals/frees a tubular lining so that it can be inflated by air (controlled by arm movements). This appears to control the flyer’s in-air buoyancy (presumably through action of vril).

As far as can be learned, when the Earth flooded, it was not, as is commonly believed, only Noah and his family who survived. Indeed, many massed within mountaintop caverns. Then they (rather stupidly, if you stop and think this one through) followed the tunnels to deep below the surface of the Earth.

Here, they began society anew, amidst many ancient animals which also evacuated the surface. In time, many of the humans grew in power, discovering an energy source they called “vril.”

Over time, these empowered folks banded together in secluded communities. They abolished hierarchical government and law in favor of self-guidance and custom.

Some American fell through a hole and was exposed to them and learned about them. He only escaped destruction (after an interminable stay as their honored guest) through the actions of a woman who, coincidentally a master of the vril, fell in love with him and could not bear to see him die.

That’s about it, really.

The story of the Vril-ya, as absurd as it may seem, actually inspired the secretive Vril Society within Hitler’s SS. These zealots were convinced of their innate superiority and destiny of world dominance.

Since then, it has been “determined” by various groups that they, in fact, are the descendants of the Vril-ya, or that UFOs are actually Vril transports. Numerous later “inventors” had patents about vril-powered technology.

Still others have “learned” that Vril is actually an ancient Atlantean language. It is produced almost entirely through glottal stops and clicking noises. So maybe it resembles Khoe languages  ?

The observant will note that, despite vril’s attachment to DCU continuity, it doesn’t have any capability attributed to it in the Young All-Stars. In particular, none from the subterranean race was mutated into a human dolphin as Neptune Perkins’s family appears to have been.

And, no, there probably isn’t any connection with Vril “Brainiac” Dox or his son.

Anyway, we might easily assume one of two things: Either the end of The Coming Race is fraudulent, and the woman who fell in love with the narrator escaped to the surface with him. Or there are Vril-ya settlements closer to the surface, and a member of one has begun living on the surface.

Either way, this could easily lead to a vril-wielding hero (or villain) any time after 1870. Given the presence of the Nazi “Vril Society,” it is conceivable that such a character might even be a hero of the Nazis, and/or a member of Axis Amerika.

Or, along with Hugo Danner, Jimmie Dale, and others, a mysterious woman known only as The Guardian (a nickname given to the woman who fell in love with Bulwer-Lytton’s narrator, and which seems appropriate, here) might have been a secret protector (or protectors, as WORG contributor Jay fancies separating the wings and the staff) of New York City in the 1910-1920s.

This has a rich background in fiction and reality, but is sadly neglected by most comic book companies.

Of course, the parallels between the different aspects of the vril and both the rings of the Green Lanterns and Thanagar’s Nth metal are readily apparent. The wings in particular demand the latter comparison. In a strict interpretation of the DCU, vril would either be the foundation for both these artifacts or the differences would be quietly swept under the carpet.

It is conceivable that the vril was mastered by the Manhunters in replacing the energy of the Oans. From there, it spread to Thanagar, where they used it to imbue Nth Metal, and to Earth, where it was harnessed by a group of humans trapped underneath the Earth’s surface.

Matter Manipulation is actually something of a guess. It’s consistently implied that vril does this sort of thing, and we’re told time and again that that’s how things got done, but we’re never shown it. A strict GM may wish to remove it.

Source of content: The Coming Race (sometimes titled Vril, the Power of the Coming Race) by Edward George Bulwer-Lytton. 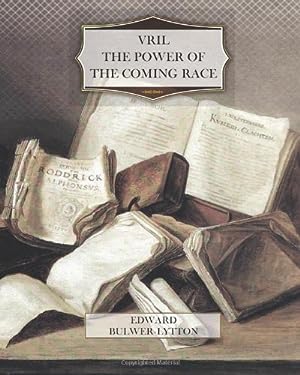 …, well, what I actually recommend is not reading The Coming Race