The Vulture flies thanks to an electro-magnetic harness of his creation. While wearing the harness, he possesses superhuman strength, durability and agility for a man of his age – the Vulture has been seen easily kicking down brick chimneys on New York rooftops, and he can maintain vigorous exertion for hours.

Toomes is skilled in electronics and physics, even if he doesn’t seem to use those skills anymore. 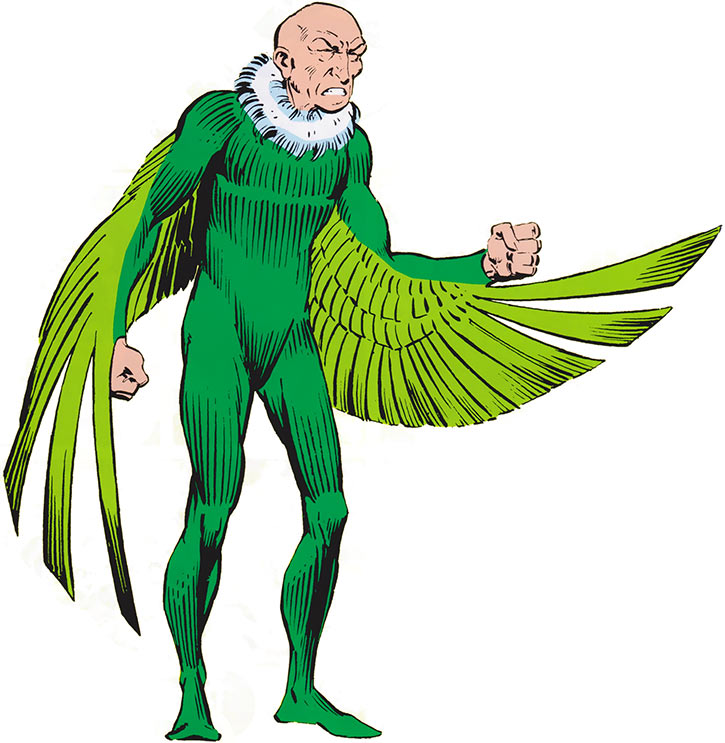 The Vulture’s harness is extremely manoeuvrable. Toomes himself has tremendous experience in aerial combat, and can outfight and outmaneuver nearly everyone while in flight (he has beaten Spider-Man at least twice). He can easily pass through door and windows at great speed, and is able to manoeuvre in narrow places such as a stair well or tunnel.

The maximum documented height the harness has flown is 3500 metres. The Vulture can fly for about six hours straight.

Adrian Toomes invented a flying harness that also enhanced his vitality. He first used it to harass and terrorize his embezzling business partner. The feeling of power Toomes enjoyed in his robberies was only matched by his increase in wealth. For this reason, he began a long criminal career as the Vulture.

Despite several defeats at the hands of Spider-Man, Vulture remains a crafty foe. Toomes has retired from his career on several occasions, but has returned to crime, usually spurred on by some airborne pretender to his aerial abilities.

Several individuals, using the designs of the Vulture suit, have endeavoured to set themselves up as heirs to the Vulture’s throne. But he has always returned to deal with such unwanted legacies. 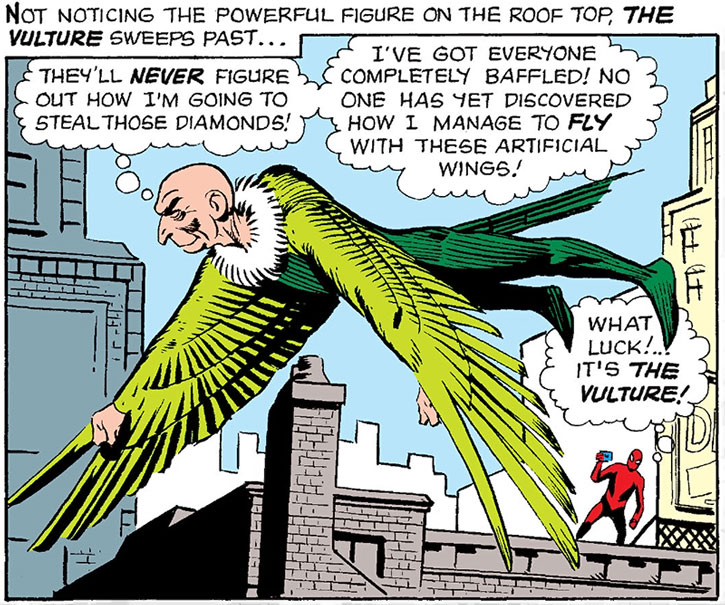 Once Toomes learned that he was dying of cancer, due to excessive exposure to electromagnetic radiation. He underwent a massive Oil of Olay treatment by draining Spider-Man’s vitality with the help of Chameleon, and was considerably rejuvenated.

However, he has since been reverted back to his classic old geezer self, thanks to a character aptly named DK. But the cancer remained cured.

The Vulture’s aged features, hunchbacked body (the “hunch” is actually the harness’ machinery), bald head, and hooked nose make him resemble the bird of his namesake. He wears a drab green jump suit, with a white feathers collar, and wings attached under the arms. 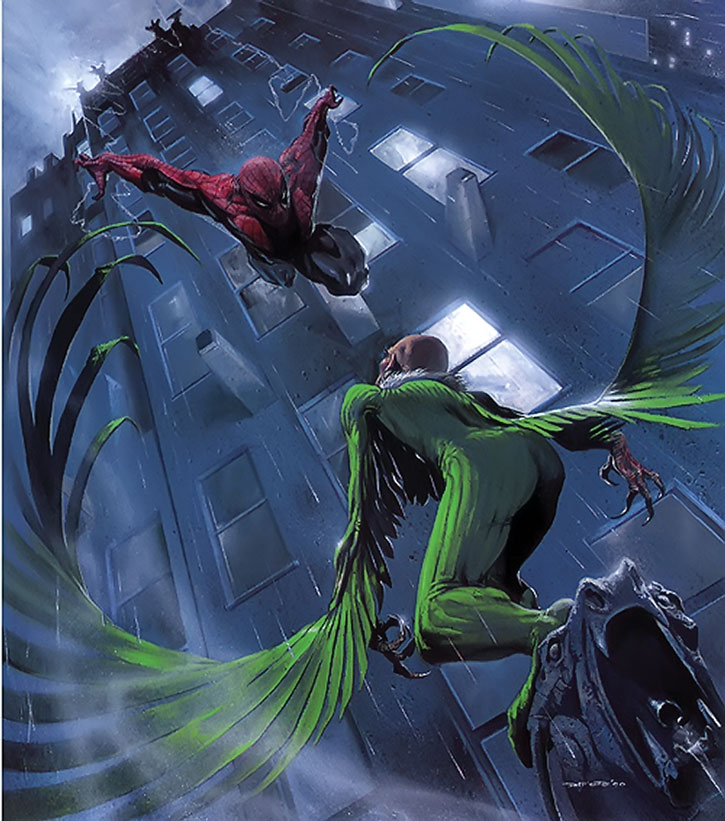 He is a careful, crafty old man. He is more interested in gathering money for his retirement than in fighting super-heroes, but he won’t back down from a fight. The Vulture is a bitter man on an ego trip. After a long, banal, repressed life where he was an easily tricked nobody, her craves revenge, power and superiority.

Nobody disses the Vulture or claims his identity without his consent. Furthermore, the vainglorious Toomes will often gloat about how smart and skilled he is. If pushed far enough, he will become a killer – one of his few victims being Gregory Bestman, the former associate who fleeced him for years and fired him.

Despite being a megalomaniac outlaw, Toomes has a decent side. He quickly became a good friend of Nathan Lubensky. When he accidentally caused Lubensky’s death, Toomes went to great lengths (including kidnapping) to offer his excuses to Lubensky’s closest friend, May Parker.

Most of his crimes are to avenge himself from some wrong, or to steal money. Occasionally, the reason for stealing money has been somewhat morbid, such as preparing grandiose funerals for himself, or stealing a new formulation of embalming fluid.

“Spider-Man is finished ! My revenge is complete ! Now the Vulture is supreme !”

In the DC Universe, the Vulture was actually Adran Tum, formerly a disciple of Paran Katar. He seeks to improve the nth metal’s  antigravity properties. It worked, but Adran’s partner tried to steal from him, so Adran created the identity of the Vulture. Adran eventually left Thanagar for Earth, hoping to get support from Paran’s son, Katar Hol. 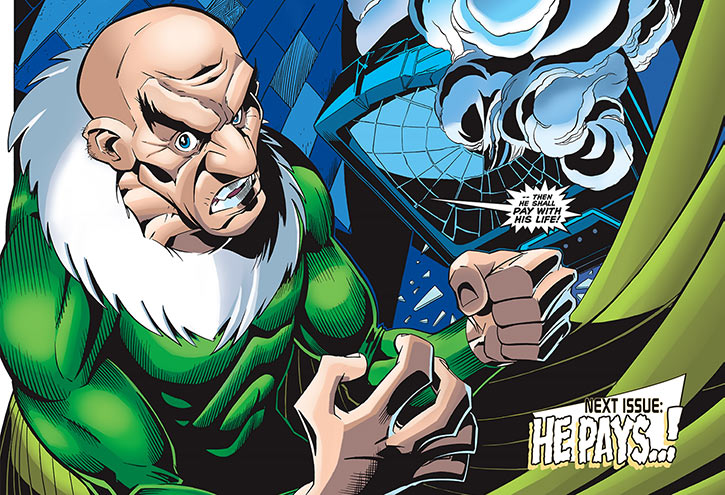 Unfortunately, the slightly-demented Adran ran afoul of Green Arrow (Oliver Queen) (leading to a certain animosity between Queen and Hol later). Green Arrow destroyed the Vulture’s suit in their most recent battle.

Years later, Adran rebuilt his suit, this time becoming a permanent thorn in the side of the Blue Beetle. More recently, Tum abandoned his wings to study the occult and took up the mantle of Felix Faust, leading to bitter fights with Faust’s son.

Drawbacks:
SIA to maintaining the integrity and perceived grandeur of the Vulture, Loss Vulnerability (if separated from his harness, see below), Public ID.

Toome’s enhanced speed, strength and durability are due to the harness, which infuses his body with special energies. For each week Toomes is deprived of his Vulture harness, he loses 2 APs in all Physical stats to a minimum of DEX 03 STR 02 BOD 02.

Before he used the rejuvenator to drain Spider-Man’s vitality, the Vulture’s STR was one AP lower, and he had 10 less HPs. When he first appeared, his STR was a 05. 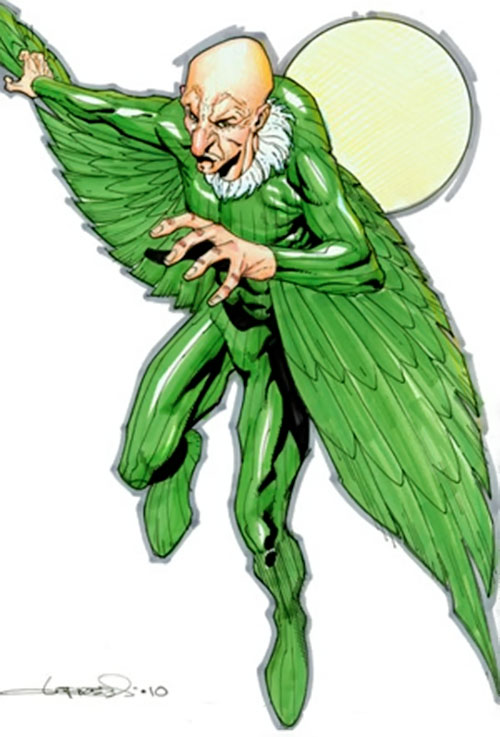 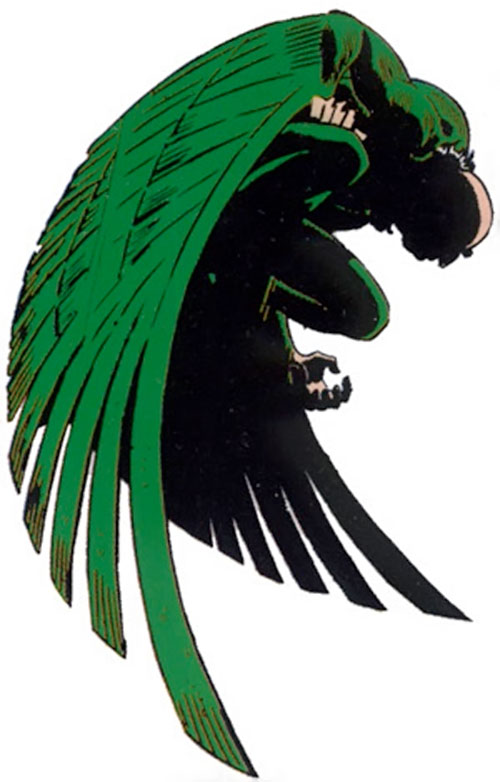 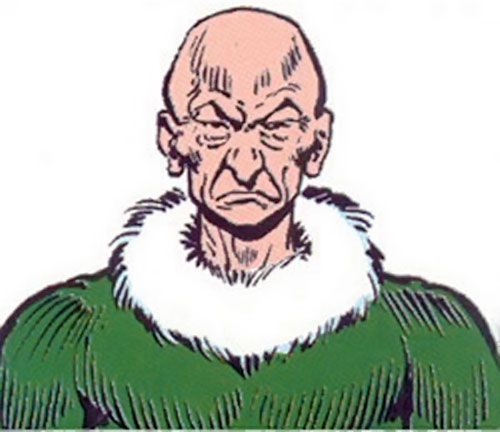 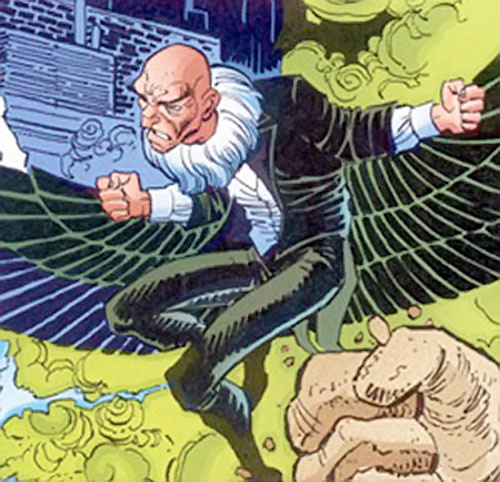 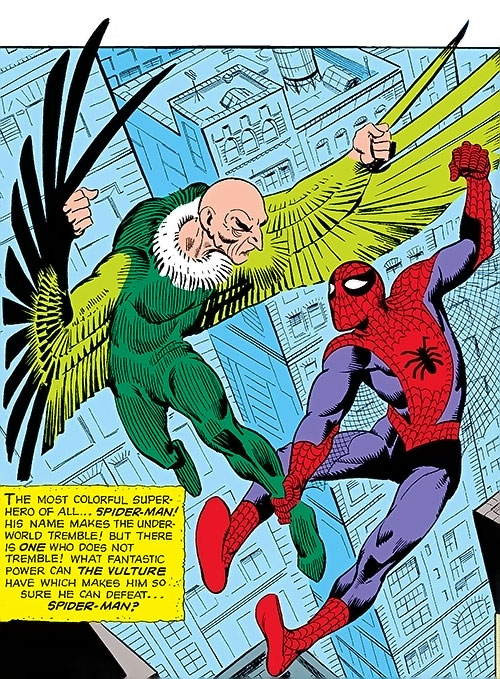