Originally, Pat Parker is but a determined nurse in excellent physical shape. She has a sharp and courageous mind, and seems familiar with a broad range of military equipment.

By her third appearance — and possibly the second — she has somehow become a highly capable troubleshooter and adventurer. She is a skilled brawler, driver and pilot, and owns a tiny seaplane and a muscle car.

She’s also knowledgeable about biology, chemistry, optics and presumably other sciences. Parker presumably has any knowledge necessary to advance the story. But by the same token there’s no emphasis put on her knowledge. It’s more of a narrative convention.

Pat is also amazingly strong for her size. It seems that her great patriotic fervour gives her the determination and energy to routinely deliver extraordinary effort. This vigour is especially apparent when fighting Axis agents, or rescuing people.

Matron Parker eventually recruits a small team of young women. Their great determination to fight the Axis makes them the equivalent of elite soldiers, as well as excellent brawlers. They are trained in parachuting, and to crew a bomber. 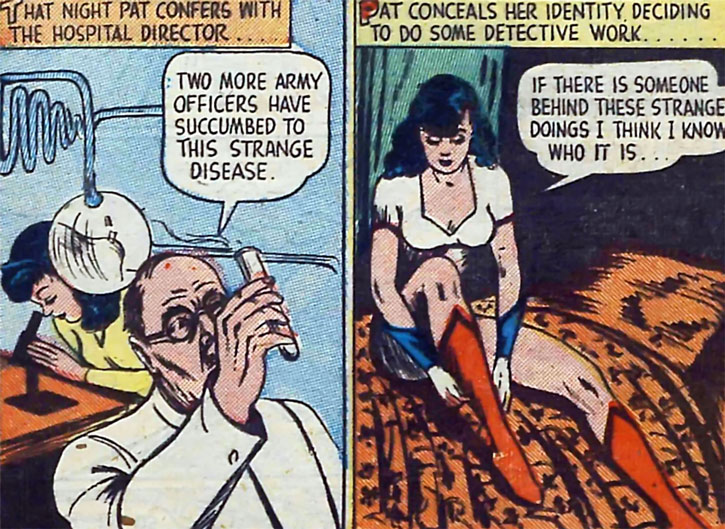 Pat and the Commandos generally use their fists, though they’ll have explosives (and/or fly a loaded bomber) on a demolition raid. They only rarely use firearms – whether they’ll have guns seems entirely random.

When she first appeared, Pat Parker wasn’t a super-heroine but a nurse in the (fictional) town of Doville, in England. In May, 1941 the hapless burg was blitzed. The population took refuges in nearly caves, and Nurse Parker cared for the children.

Hearing the noise of a Morse transmission, Parker spotted 5th columnists (ye gads !). Killing them by rolling a big rock downhill, she then enlisted a local fisherman to go warn the authorities about mines in the Channel. 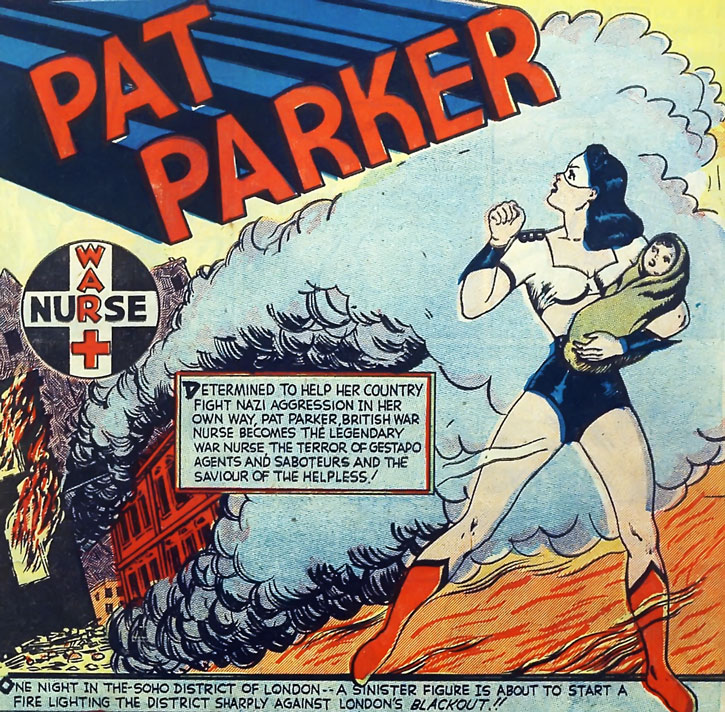 They were slightly too late and a freighter was sunk by the mines, though Pat could rescue a kid from drowning. Rescued in turn by a R.A.F. pilot, they used his radio to warn about the mines. Nazi fighters attacked, and Nurse Parker shot down one – but they were downed by the other. The pilot managed to crash-land, and Pat got him to a doctor in time.

Those were the first 5 pages of her adventures. After that stuff happens in Speed Comics #14, which couldn’t be reviewed for this profile.

Now working at an hospital in London, Pat heard a wounded soldier mutter something about germs and a reservoir. Deducing that Nazi spies would sneak in and poison drinking water, she intercepted them and captured their U-Boat, delivering it to the Admiralty. 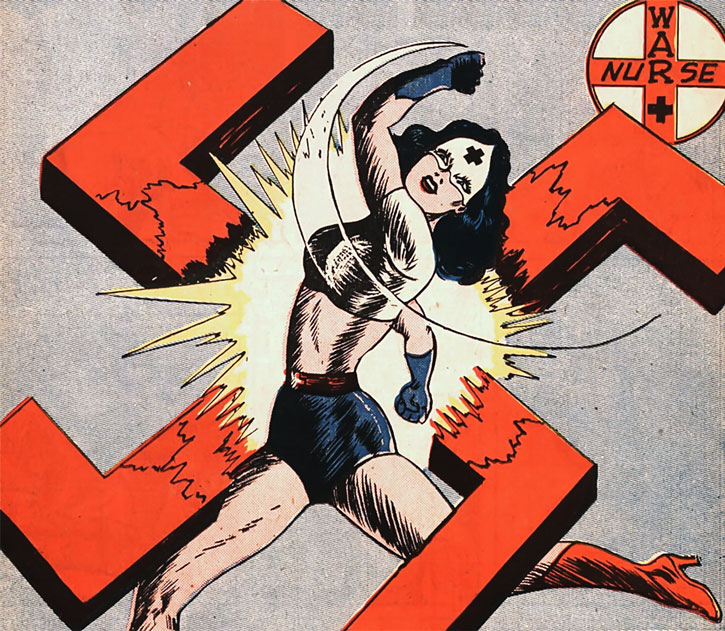 Embarrassed by the resulting press exposure, Nurse Parker made herself a mask as well as a very… unencumbering costume to continue defending Britain as War Nurse.

Over this span of time Pat worked as a nurse and ambulance driver at St. Mary’s Hospital , in Paddington. She then transferred off-panel to what is presumably the Princess Mary’s Royal Air Force Nursing Service  (back then an all-women corps).

Speed Comics #19 mentions that Parker is promoted as a “Captain”. Which should have been “Matron” in the PMRAFNS ranks system.

While Pat was working with an Air Marshall of the RAF, they were captured by a traitor and German spies. The Nazis left Parker behind unarmed, but she made her way to Berlin, punched Hitler and Goering, and rescued the Air Marshall.

In late 1942, Pat recruited 4 women to form a team of freedom fighters called the Girl Commandos. These were :

In Burma, the Commandos stole an Allied plane for a daring jungle raid during which they rescued wounded pilots of the famous Flying Tigers . Later on, they rescued the President-in-exile of Korea, whom Japanese spies had tricked into returning home.

When a Japanese expeditionary force conquered Hollywood, Black Cat (Linda Turner) warned other costumed heroes by radio. Pat Parker and 2 Girl Commandos responded, as well as Captain Freedom, Shock Gibson, Ted Parrish and Rick Horne. The Japanese were routed before the US Army could arrive. 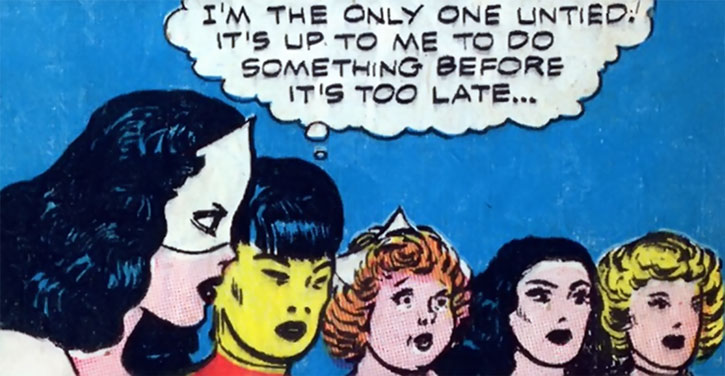 During a raid in occupied France, Ellen was captured by the Nazis. Pat, Tanya and Penny came back for her. They recovered Ellen, destroyed a Nazi-operated factory and recruited a new Commando, Yvonne Aimable, who filled Mei Ling’s position while she was absent.

German spies then used a Norwegian vagrant to lure the Girl Commandos into a trap. However, the simple-minded traitor eventually realised what he had done and let the Girl Commandos escape out of contrition. They destroyed a Nazi base on their way out.

At this point (Speed Comics #27 in July, 1943) the stories take another sharp turn into a different genre – one best covered by a separate profile.

As with many 1940s series-within-anthology-comics, the War Nurse stories lack coherence in narrative genre. One imagines that they tended to align on whatever was selling well at that point.

The series starts as “everyday heroism” war propaganda/inspirational story, then quickly veers into two-fisted Axis-busting counter-espionage adventures. Much of this profile considers the latter as the “core” War Nurse genre. 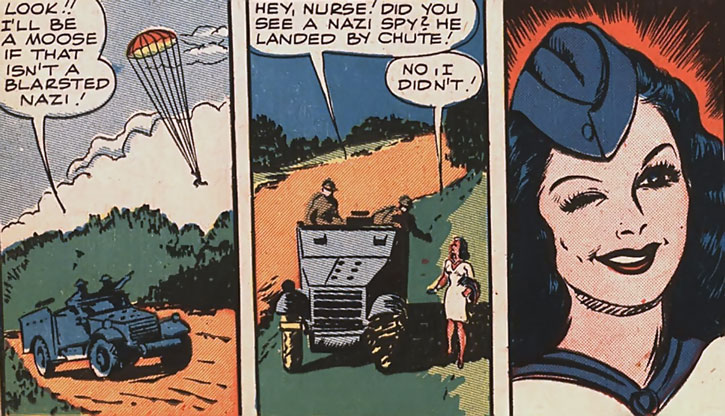 Later series slowly evolve toward comedy – they’re more like parodies of war stories, like most 1940s Captain Marvel stories. The enemy is a bunch of phenomenally cretinous racist caricatures, the plots are very simple and closer to period cartoons, hitting the good guys with a deadly weapon is physically impossible, etc.

With Speed Comics #27, the genre rubberbands back into military stories (within the bounds of 1940s children’s comics). Pat Parker is still the leader, but the girls now wear uniforms, use weapons to deadly effect, conduct serious war missions, etc. It’s closer to the Howling Commandos, except the heroes wear skirts.

Early on, when she’s not War Nurse Pat wears brown jodhpurs, a tight yellow blouse and leather riding boots – though for some reason she still as her nurse headgear. Why does a nurse works wearing horseriding clothes rather than a nurse uniform ? I don’t know.

After she apparently joins the PMRAFNS she wears nurse uniforms. 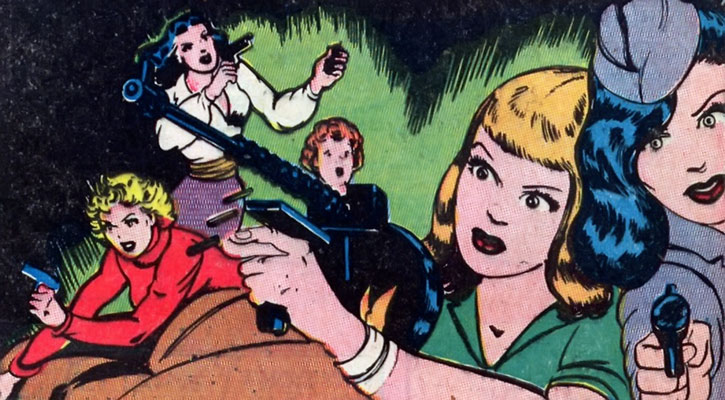 The War Nurse costume resembles a 1930s chorus girl outfit, except of course for the mask. It is not unlike the costume of the Black Cat, also appearing in Harvey Publishing’s Speed Comic (and later reinvented as a Femforce member).

It consists in a white short-sleeved halter top, blue gloves, black briefs, and red boots. There is also a white facemask which looks like a combination mask and tiara, as it only covers the top half of her face (and none of her black hair) and comes to a peak above her head. The mask has a blue cross on the top of it.

Pat Parker is extremely patriotic and energetic, forever saving lives and braving danger to defend England against “the jerries”. She shuns fame, as she considers that she is merely doing her duty. 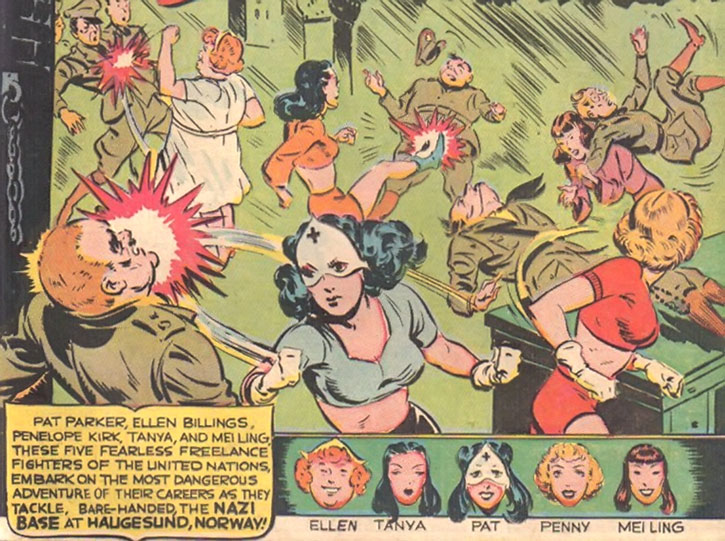 She’s a decisive, take-charge sort. If men are reluctant to obey her orders because she’s a girl, she’ll just have them comply at gunpoint – but it’s all in good fun and nobody minds.

Since they do not have any official sanction, Pat and the Girl Commandos are constantly stealing military materiel (particularly planes). But it’s all in good fun and nobody minds.

“Thumbs up – there’ll always be an England !”

“Now that Ellen is out of danger, I’m free to go to Paris as War Nurse !”

Few British heroes were featured in 1940s DC Comics stories, except maybe as parts of a team.

War Nurse and her eventual Girl Commandos would thus likely not interact much with DC characters, though if the Girl Commandos never met the Boy Commandos, there just wouldn’t be any justice in the world.

Equipment:
They sometimes have demolition equipment, and are occasionally shown wielding firearms. In some later stories, the Girls have their own medium bomber – apparently a donation.

Penelope has a small 2-way radio.

Technically, War Nurse has a Secret Identity but this never acts like an actual drawback. It’s just a decorative genre convention.

Except for Morse, the Language Advantages do not quite appear in the stories. In these comics everybody in the world speaks English as their first language, though often with “funny” accents. The listed Languages are the ones Pat would have needed had the story taken place in a more realistic setting.

Enemy troops are often so incompetent and buffoonish as to have stats below that of the average untrained person (so we’re talking 01s). 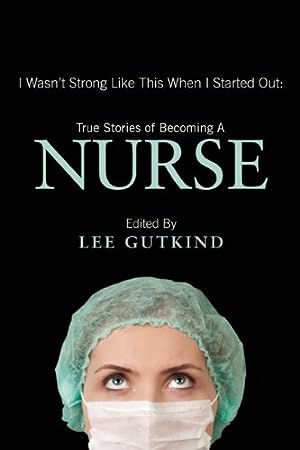 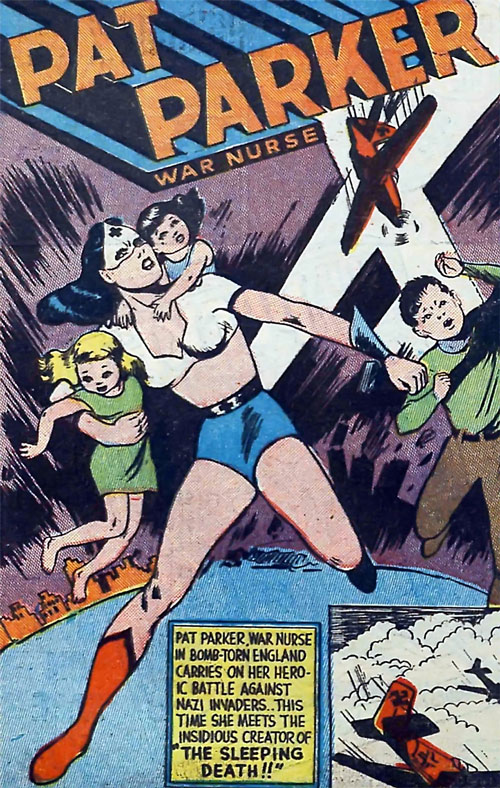 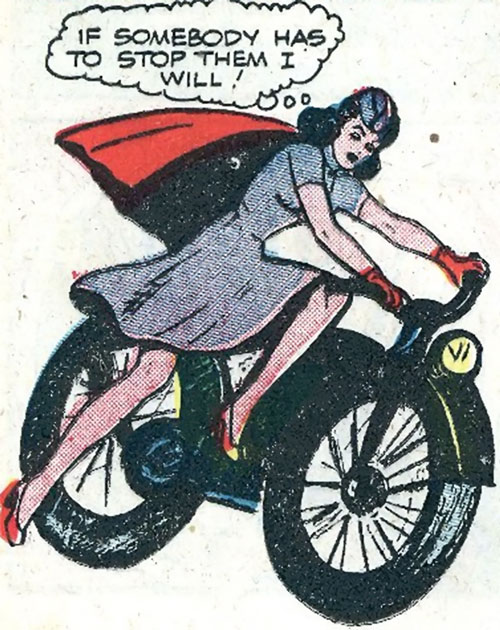 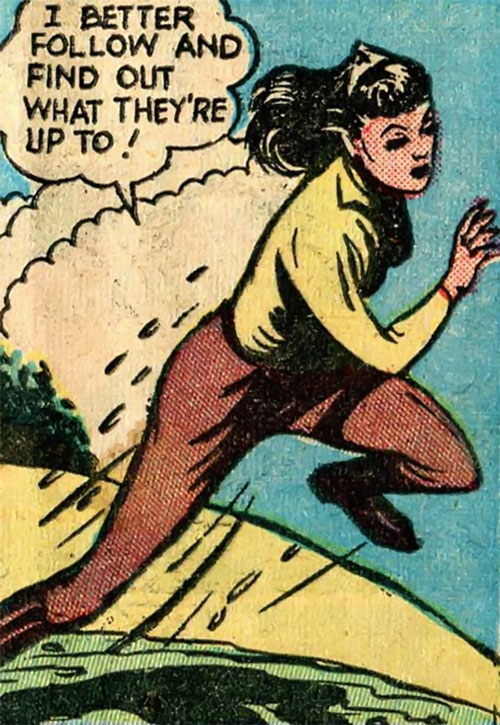 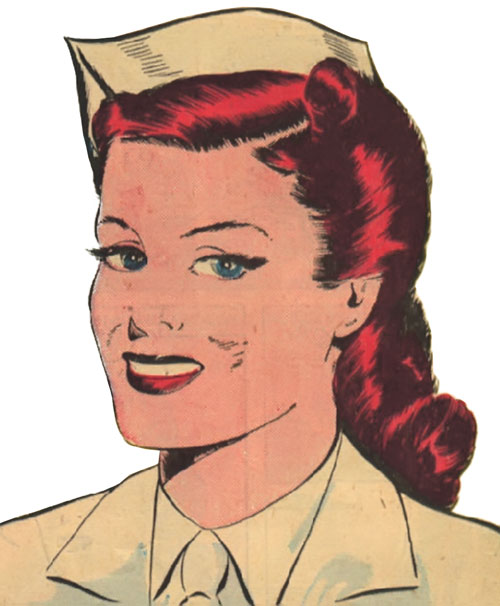