The Warbeast is a giant, mutant carnivorous dinosaur – likely an allosaurus or a T-rex. Its apparent mutations include :

This massive brain, in true rubber science fashion, gives the creature a very high intelligence and a number of psionic  powers. Such as eyebeams shot from its third, or the ability to master language within minutes (through some form of telepathic scanning).

The creature referenced as Warbeast claims to be a mutant dinosaur born around Earth’s most famous mass extinction event . It once claimed to have been the one who brought the end of the dinosaurs by eating them.

This is likely an exaggeration based on preying on the survivors. Warbeast’s mutation may come from the extinction-bringing event, since the more kinetic hypotheses about it were still favoured in the early 1960s.

In unrevealed circumstances, the creature ended up trapped in ice. It was found in modern times in the Arctic. It was known to an apparently hostile civilisation known as the Antarcticans. These may have been an equivalent to one of the races in the Savage Land  of Marvel’s Earth-616 .

Antarcticans saw the congealed reptile as an important relic of great potential danger and apparently, of some ritual and/or religious significance.

The block of ice was somehow acquired by the law-enforcement organisation L.A.S.E.R.. Seemingly in violent circumstances involving an Antarctican named King Zero. It was encased in a special refrigerated container, then code-named Cargo X.

L.A.S.E.R. then believed the creature to be a corpse. Cargo X was thus brought to New York City. L.A.S.E.R.’s commander Sky Solo then enlisted the help of young super-hero the Fury to escort it.

The Fury thwarted an assault by men with jetpacks and laser rifles. Thanks to him, Cargo X was safely delivered to the L.A.S.E.R. research centre. But Warbeast soon broke free, killing L.A.S.E.R. soldiers and scientists. It psionically acquired an instant mastery of English.

No one escapes the Fury

Warbeast ran into the Fury as the lad was fighting a supervillain, the Voidoid. The panicking Voidoid tried to kill Warbeast, who flattened him with a mind-bolt.

The Fury, soon joined by Sky Solo and L.A.S.E.R. troops, engaged the beast. Using his superior agility, several pounds of tranquillisers from a nearby ambulance, and Voidoid’s gear, the Fury managed to plunge the Warbeast into the East River.

There, the tranqs finally took effect. That allowed L.A.S.E.R. to recapture the monster and detain it much more securely.

Warbeast likes to kill and eat things, mostly, and affirms its mutant superiority by killing and eating everything. It has a Stan Lee villain-esque dialogue, as illustrated by the typical quotes.

“What destroyed the dinosaurs ? That’s easy… I DID !” 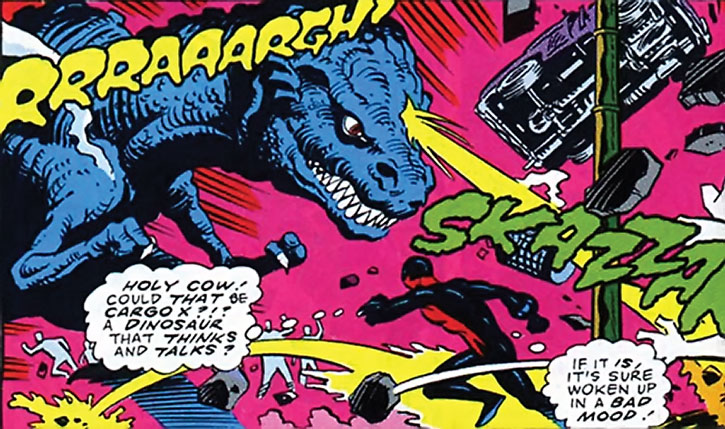 “Ahhh… violence… I like that in a species ! It makes them so much more appetising, don’t you think ?”

“You insufferable gnat ! I’ll rend you limb from limb ! Insolent cur ! You mock the length of my arms ?! You, who do not even possess… a TAIL ?!” (unexpectedly hits the Fury with his tail)

“You tail-less rodents disgust me ! You’re so easy to kill ! At least the stegosaurus and the triceratops put up a fight when they realised they had a killer mutant in their midst !”

“Do you really think you tail-less rats can stand against me ? The great reptiles could not stop me ! The long ice barely slowed me down ?”

“Flight ? You think the power of flight is new to me ?! I, who tore the great pteranodons from out of the air… or cooked them as they flew !” (ZZAAAZZAT !)

Advantages:
None demonstrated, but quite possibly Slowed Ageing or even Immortal. 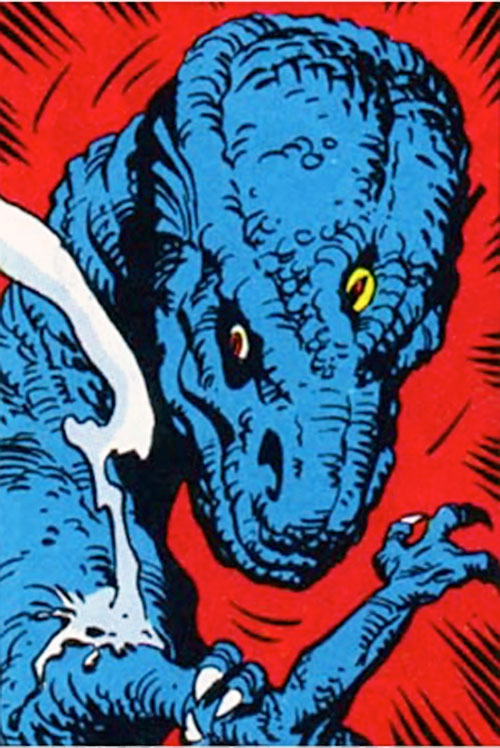