Warblade is a Human-Kherubim crossbreed. His Kherubim half issues from a subject race of shape-shifters within the Kherubim empire. He is expert in martial arts (Kendo, Kung Fu).

His main ability is to transform any part of his body in a deadly sharp weapon (à la T-1000 in Terminator 2). He is also extremely hard to kill, and can in some fashion make his body disappear from radar detection.

Daemonites murdered Reno’s family and left the young boy orphaned in Hong Kong. Vowing to rid the Earth of Daemonites, he’s spent his whole life preparing himself for the fight.

Somehow he ended up at one point as one of Cyberdata’s SHOCs. There, he fell in love a fellow SHOC, Misery. But he never knew whether he truly loved her, or if the sick manipulatrix was using her empathic powers on him. Until she betrayed the troop to follow an agent of Cyberdata, that is.

In the ensuing fight, he killed her and was immediately attacked and apparently killed by Ripclaw, a Wolverine-like SHOC (now a member of Cyberforce). As Ripclaw loved her in the first place, it was easy for her to make him crazy about her.

Left as dead after a dive in the sea, he was rescued by Lord Emp. Emp recognized him as a gifted Human-Kherubim crossbreed. That’s how he joined the WildCATs, a team dedicated to the same goal as Bryce – war against the Daemonites.

Warblade has been the least affected by the homecoming episode of the Wildcats – when the team reached Khera, the Kherubim’s flagsplanet. Indeed, he discovered that a whole race of the Kherubim society were warrior shape-shifters, and they even had a guild. So, there, he learned many tricks to fully use his power.

The only scar left after the drama was due to the shattering of the team, which had become his only family.

When not in a fight, he looks like a well built human, with blue eyes and long green hair.

When he fights, he uses his plasticity to mask his body and face features in a metallic grey and blue sheath, showing white empty eyes but still green hair.

He’s a violent, merciless fighter, ready for the kill at any time. Personally responsible for the death of dozens of Daemonites, he won’t quit until their evil presence is completely destroyed.

Warblade was created during the alien infestation that gave rise to the New Blood heroes, and is quite probably somehow related or replaces Edge.

Suffering from emotional instability and seeing his destructive potential, he contacted the government for help. After counseling, he signed with the military. At first, he was on loan with Lexcorp and was part of its special teams (SHOCs).

The government took him back after a highly violent encounter with Cyberforce, after which he was in fact believed dead. He is now part of the Ultramarines. 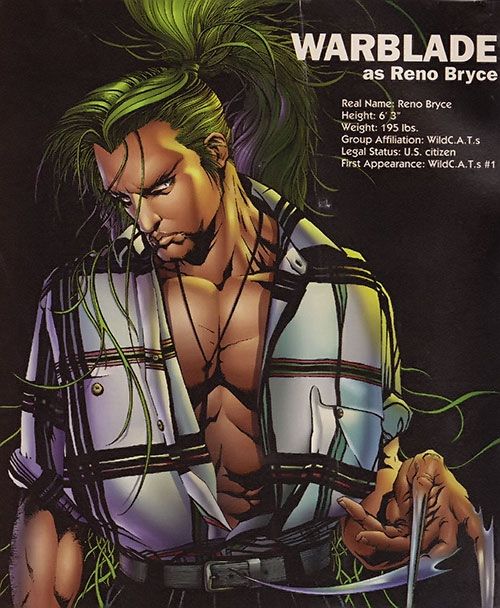 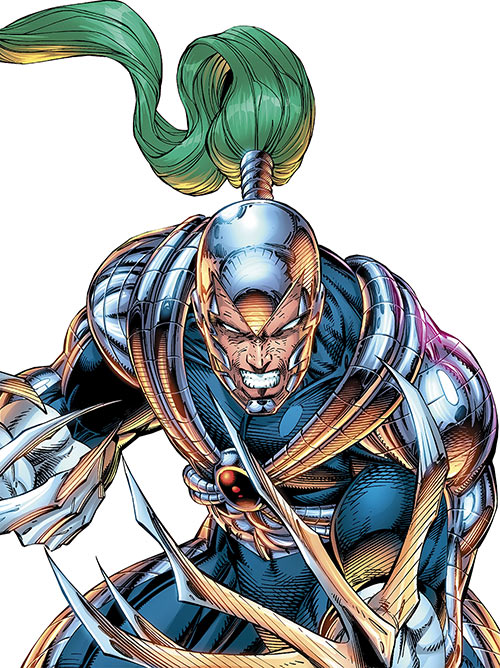