Warbow wields a special bow-like weapon. It seems to generate energy arrows whenever he pulls the string.

He’s an excellent bowman, and the game stats assume that he’s also well-trained in hand-to-hand combat. Since he was the tactical leader of the team, it is possible he has a military past.

Since everybody else was wearing armour, his costume presumably had some light protective abilities.

Heavy Mettle is a team of operatives wielding high technology weapons, usually as light power armour . They were assembled by Joe Silvermane when he started running the Silvermane family of the Maggia. Firestrike seemed to be their leader, and Warbow their tactical leader.

Other members included Barracuda, Blackwing II, Riot and Stronghold. Our guess would be that the armours and weapons were contracted from Madame Menace.

In 2000, Silvermane’s Heavy Mettle clashed twice with the New Warriors. The criminals performed well despite their generally lower power level. Still, they were defeated when their leader, Firestrike, betrayed them after falling in love with Turbo, one of the New Warriors.

The members of Heavy Mettle were all arrested, including Firestrike.

In 2009 they registered with the Initiative. Heavy Mettle members were tapped for the second version of the Shadow Initiative. It was no longer an elite black ops squad, but a trap for cannon fodder troops. The Shadow Initiative was spent retaking the 42 Prison in the Negative Zone , to soften the alien opposition therein before more valuable assets would move in.

Warbow was deployed again when Osborn had his forces attack Asgard . Seeing how he was outmatched, Warbow broke ranks and ran, but Asgardian archers shot him in the back. Whether he survived is unrevealed.

On some pages, Warbow seems to be Asian.

Warbow seemed professional and dedicated, directing and advising other Heavy Mettle members (except for Firestrike) in combat.

However he realised that the Initiative was using him as cannon fodder, and refused to fight under such circumstances.

“Stay tight, everyone ! Remember the briefing on these losers. Stronghold, be careful. Nova may be out of your strength capacity.”

Counted as Toughness 4 for PL computations. 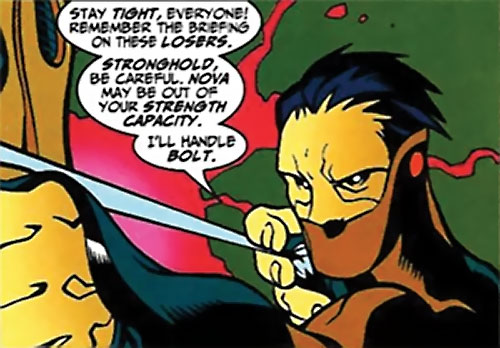