This is the second half of this profile. It was cleft with a powerful blow to be easier to read.

You should of course read the first half first.

Genevieve discovered that her brother was now a ghoul. That is, his body had been fully taken over by the Taint.

He was also allied to a mutant darkspawn. This creature was a sapientCapable of intelligent reasoning individual, calling himself the Architect.

The architect has a master plan

The Architect had a grandiose strategy to end Blights forever, and free the darkspawn from the Old Gods.

It involved taking most of the surface population through the Joining, to have a large force of Wardens. Then entering the underground to kill each remaining Old God before the darkspawn would awaken them.

With the Old Gods gone, there would be no one to launch Blights anymore. And with the darkspawn’s mind freed from Old God presence, the Architect could grant them intelligence and individuality.

By this point, Genevieve was well past the point where she should have died in her Calling. The mental pressure from the Old Gods was damaging her mind, and she was fixating on not letting her brother down. 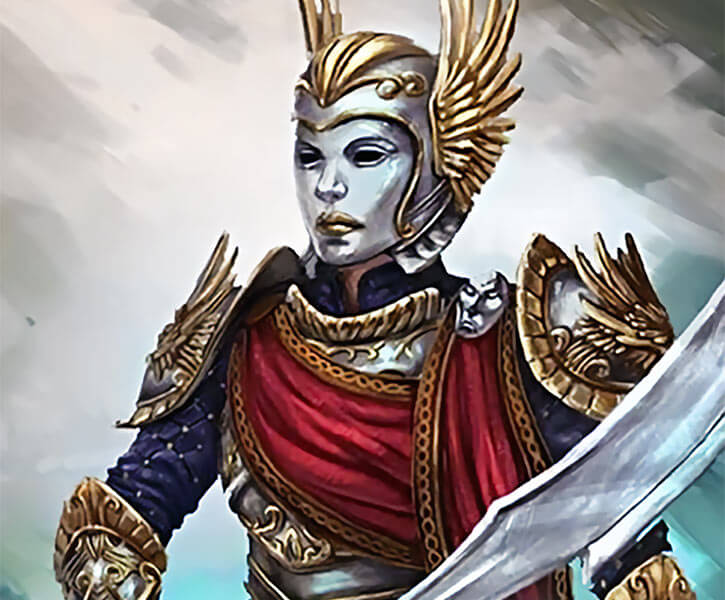 Like Bregan, Genevieve agreed to have the Architect accelerate the growth of Taint within her. That would “fast forward” her past the phase where unbearable Old Gods pressure drives Wardens insane.

She thus became a ghoul, but retained her mentality. Like Bregan had.

Meanwhile, the Wardens party ran into an overwhelming force of darkspawn.

The Architect and the siblings saved them just before it was too late. The Architect again made his pitch. Party member Utha agreed to join.

The rest of the party managed to escape to the surface, at the cost of Warden-Lieutenant Kell’s life.

However, the survivors — Maric, Duncan and Fiona — were captured by First Enchanter Remille, of the Circle of Magi in Ferelden. Remille had covertly allied with the Architect months before.

(The Circle of Magi is a sort of prison/university. These are the only places where mages can legally live, under the watchful control of the church.)

The siblings and the Architect travelled to the Circle to meet Remille and discuss what to do with the prisoners. 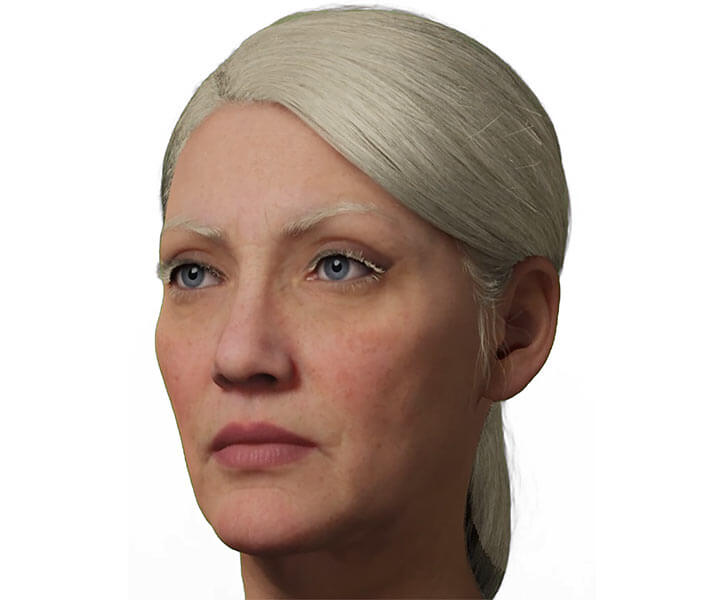 However Duncan, Fiona and Maric managed to reach out to Genevieve. Though she had been blinded by her desperate need to stand by her brother, she now realised that she couldn’t accept the Architect’s plan.

(The Joining would kill the vast majority of ordinary people undergoing it, for starters. Though Bregan and Utha were willing to see this through to end the Blights, Genevieve wasn’t).

Once again driven by duty, Genevieve rebelled against her brother and the Architect.

Aye, there was a battle

This triggered a brutal battle. Remille seized this occasion to betray the Architect. And the prisoners seized *this* to escape and rearm.

To prevent Genevieve from killing Bregan, the Architect slew her with a Taint-based spell.

However, during the following minutes :

The report about Genevieve’s party findings was largely buried. Perhaps by political enemies of hers in Weisshaupt.

Not heeding the warnings led to the Amaranthine Conflict of 9.31. This was a result of the Architect’s machinations to free the darkspawn’s minds. However, this crisis was terminated by Warden Commander Adaia Tabris.

(Well, whoever is your Player CharacterRPG characters played by a player, rather than the gamemaster or the computer. when playing through this DLC. In the main writeups.org playthrough it was Adaia Tabris.)

Soon after the battle at the Circle of Magi, King Maric authorized the Grey Wardens to return to Ferelden. They had been banished from the country centuries before.

Duncan was thus later made Warden Commander for Ferelden. He worked on recreating a Warden force there. His efforts were instrumental in saving the world from the Fifth Blight as he recruited Alamen Tabris, the legendary Heroine of Ferelden.

Fiona would become an important figure in the fight for mage freedoms.

Genevieve is usually encountered in high-end, full plate armour. Over that is a white cloak, echoing her stark white short hair.

During The Calling, she’s likely in her mid- or late 40s. Her sharp features are worn by age and stress.

She has hard blue eyes, filled with cold rage.

It doesn’t seem technically accurate. This isn’t full plate, and this isn’t a credible sword. Maybe it’s a ceremonial or a formal outfit. But it’s a fine base to imagine what more soldierly gear would look like.

That her helm would have a mask makes sense, in the Orlesian context. Genevieve isn’t a noble by blood, but as a senior officer being barefaced in Orlais would be a faux pasAn embarrassing or tactless act or remark in a social situation..

As with every Dragon Age: The Calling profile here, the portraits are original work using a character generator. I’ve kept the hair ivory white rather than stark white, since stark white would have looked terrible.

After Genevieve allied with him, the Architect accelerated the growth of the Taint within her.

Grey Wardens do not normally reach that stage. They undertake the ritual Calling suicide/combat once the symptoms become too severe.

A person overtaken by Taint is called a “ghoul”, but they are not undead. However : 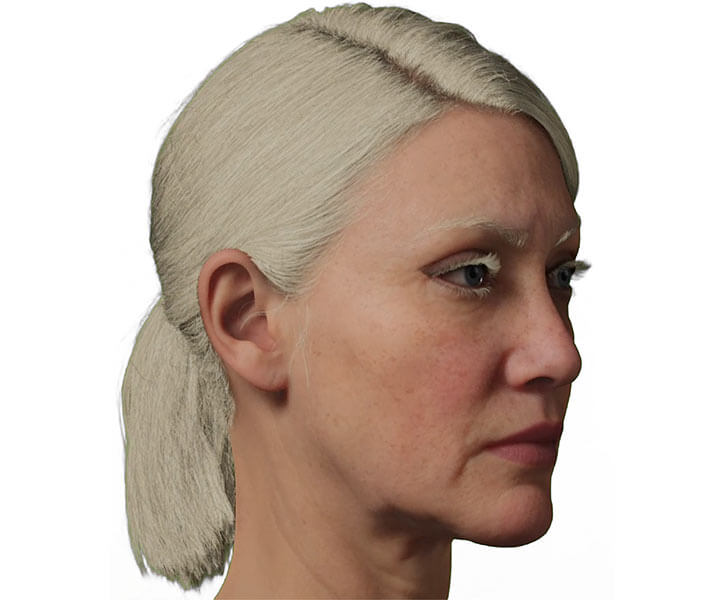 Genevieve did accomplish her girlhood dream of becoming a paladin in shining armour, and a formidable warrior. But at far too great a cost.

What her dream actually got her was a horrible life of duty and sacrifice. The decades of constant stress and nightmares wore her down.

She also felt bitter and guilty over having dragged the two persons she most loved — Bregan and Guy — into this inescapable horrorshow.

Genevieve came across as stiff, harsh, cold, strictly regimented and remote. It didn’t take much acumen to see that she was filled with pain and anger.

Harrowed, introverted and clinging to her duty like a lifeline, Genevieve was bad with people.

She wielded them like weapons, like assets, and didn’t know how to relate to them. She was too busy suppressing her own feelings to address those of others.

She thus kept riding her team hard, never letting them rest or take a step back to assess risks. She only talked to give orders, never mingled, and led by driving herself even more harshly than her subordinates.

When Julien died, Genevieve wanted to help Nicolas. But she had never done anything like that before. Thus, she just didn’t know what to say.

She also knew that others were comparing her to her brother. Bregan had been an empathic, fair, low-ego, beloved leader. Genevieve was hurt by knowing that there was no way she could uphold this legacy. And thus further closed up. 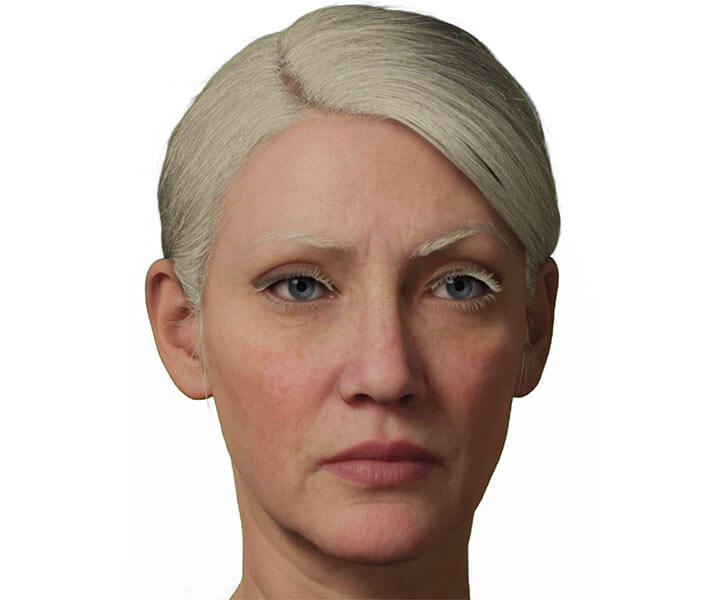 A Calling by any other name

Genevieve began hearing the “music” of the Old Gods in her mind as they entered Ferelden. Characteristically, she didn’t tell anybody about it. But she knew that her time was up.

From there she was on a suicide run. Her only goal was to reach her brother before it was too late, and save the world. Anything else was just dulled away, though her guilt over risking the life of her team was mounting.

For instance, she didn’t quite wonder why her “darkspawn sense” allowed her to detect Bregan that precisely. She was like an exhausted marathon runner only seeing the finish line after which they’d collapse.

Genevieve had a strange relationship with Duncan.

At first, she abused her prerogatives so he’d suffer and die to avenge Guy and, in a way, herself. But that didn’t pan out.

Then she paid extra attention to his training. She trusted him with important missions, even though he had been a Warden for but six months. She gave him the deadly silverite daggers that had once been Guy’s. She seemed almost protective of him.

Duncan didn’t know what to make of this. Heh, even Genevieve probably didn’t. But this strange trust drove him to become the best Warden he could. Though Genevieve was closed and harsh, she was the first authority figure who had ever treated Duncan with any sort of respect.

(I had a faint impression that Genevieve wanted to believe there was a reason behind who died and who lived during the Joining. That Bregan and Guy had lived because they were good men, and Duncan would die because he wasn’t. This superstition might have given her a better image of Duncan.)

When trapped in a Fade dream of her greatest desire, Genevieve was… the no-name wife of a minor military officer, with a mediocre life in a dismal outpost. She was married to Guy, though.

Her greatest desire was that she had not made her brother suffer by joining the Grey Wardens. This had been accomplished in this “timelineUsed here in the sense of an alternate history, where events unfold differently”.

Yet, the coldly realistic Genevieve knew that never accomplishing her own dream would also inevitably condemn herself to a life of drabness and disappointment.

“You may call me Genevieve. Or Commander. Nothing else. And our order will bow to no authority, especially not some foolish watch captain who believes he possesses more power than he does.”

“You have seen the darkspawn with your own eyes, my lord, have you not ? You know that they are no legend. Neither are we.”

“My brother has always been as much a part of me as my arms. To have him wrenched away from me… it was unbearable.”

Dependent (Bregan 0 pts), Guilt, Misc.: As a Grey Warden she needs about 50% more food, has about a 30-year life expectancy after the Joining, and experiences nightmares caused by darkspawn activity (particularly during a Blight).

Credentials kept at Medium since Weisshaupt seemed to have a poor opinion of her.

My notes don’t mention her understanding Utha’s sign language. But I’ve kept the Language, under the impression that I just forgot to write it down during research.

For the sword, I’ve stuck with a silverite blade. There likely were enchantments (enchantment !  ), but nothing we can clearly observe. The powers of Ageless  would fit well (weakening darkspawns, stamina regen, etc.) but this is too speculative to include in the stats.

Socially Inept would IMO be overkill. I’ve simply given her a so-so AUR. Whereas the two leaders around her (Bregan and Maric) had a high AUR and the Leadership Advantage.

The scores for Genevieve and her party are relatively highballed. Note the high DEX, STR, AVs…

These are senior Wardens. They smash through the darkspawn like nobody’s business, they kill a dragon, and they’re clearly better fighters than even King Maric.

Maric struggles to hold his own for much of the expedition. Even though he’s a hardened vet in top-notch armour and with a magic sword.

He also notices right away that these guys are the equivalent of specops troops. Even when it’s just the speed and efficiency with which they make camp and forage.