Way back in the ancient past, Gallifrey was ruled by a matriarchal clan of priestesses, led by the Pythia. Gallifrey is probably most well known as the birthplace of the Doctor, the infamous time traveller and sworn enemy of the Daleks. Rassilon, a temporal scientist, had just discovered secrets of time travel, and shared this discovery with the Gallifreyans.

This led to a civil war, Rassilon and his scientific expertise, against Pythia and her immense psychic powers. Rassilon won, but at a terrible cost. Pythia fled, defeated, but her last act was to use her immense mental powers to render the entire race sterile.

Rassilon created artificial vats of genetic material (dubbed Looms) from which he could decant a new race of Gallifreyans. The first prototypes out of the Looms came out slightly different from one another, as Rassilon tinkered with their genetic material before finally settling on a “standard model” (humanoid, with minor psychic powers, and able to regenerate).

United by their differences from the rest of the population, they grew up to become special operatives of the Gallifreyan council – The Special Executive. Eventually, they left Gallifrey, and accepted non-Galifreyians into their ranks.

The Special Executive are a band of interstellar and interdimensional  mercenaries. But they do have some scruples and won’t work for just anyone.

They first encountered Captain Britain when Saturnyne hired them to bring the good Captain to the Dimensional Development Court, where he could testify on her behalf. Saturnyne had been falsely accused of incompetence during an incident on Earth 238 where Captain Britain was present, and she needed him as a witness.

The Special Executive found Captain Britain, but he was hesitant to help, so they kidnapped him and transported him to the Dimensional Development Court.

However, in the ensuing travesty of a trial, Captain Britain found himself fighting the forces of His Whyness Lord Mandragon, Saturnyne’s Judge, Jury and Executioner. Feeling partially responsible for getting the good Captain into this, the Special executive helped Britain rescue Saturnyne. Then they returned to our Earth where they briefly resided in Braddock Manor.

Eventually the nigh-invincible Fury arrived at the manor. During the brief struggle that followed, the Executive took casulaties. Oxo was killed, Legion was left with weeks to live, and Wardog lost his cybernetic arm.

The team was split on whether to help Captain Britain face the menace of Jim Jaspers after this. They finally decided not to help due to the lack of payment. They are mercenaries, after all.

It was claimed that the Gatecrasher’s Technet were a prior version of the Special Executive, existing sometime before Wardog was even born.

This team consists of several Executive members, but none of whom are likely to be ’loom‘ born, and all more or less your normal run of the mill aliens.

An exceptionally well dressed humanoid dog, though, normally in chic military style, top of the range, designer interstellar mercenary fashion. And a gold cybernetic arm, the left one.

Imagine a cross between a werewolf and Red Dwarf’s Cat, and you get the picture.

The leader of the Special Executive, a fast talking deal maker who finds most of the work for his team. Motivated by money, but has a better side, as he sees himself more as a swashbuckler.

His real talents lend themselves to leading and organizing more than actual combat.

(During a huge battle between the Special Executive and Mandragon) “For my part, I’m going to sit here and hope that this is all a terrible nightmare.”

As they have never interacted with mainstream Marvel, they fit in well with any stories featuring time travel, dimension travel and just plain weirdness. Basically the latest book Grant Morrison is working on.

Helper(s): International Hero.com and the Appendix of the MU for history and the missing blanks. Illos from Marvunapp.com. 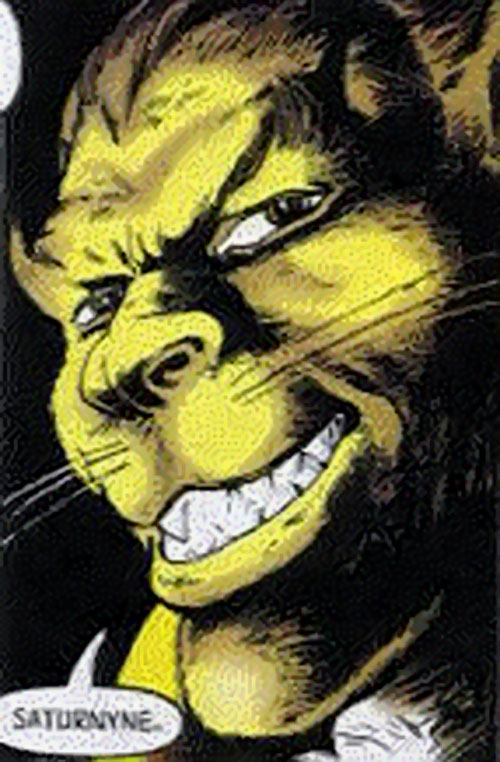