Given her background and beliefs, Mora Hager presumably has some military training. She also demonstrated skills in both leadership and manipulation. She had a cadre of standard henchmen, at least one of whom was also an OK spy.

The Wargod armour gave her protection, enhanced strength and incredible speed and timing with her weapon – a huge, electrified two-handed mace. Using her superhuman efficiency and Pressing the Attack, she kept Captain America (Steve Rogers) on the full defensive, while wearing him down as the electric shocks from her weapon where conducted through the shield.

OTOH, Cap was pretty much sleepwalking through the story.

Wargod was a domestic terrorist, convinced the might makes right and that democracy was a sham. She wanted the “real men” from the military to unapologetically take control and impose their will on anyone who disagreed, both abroad and at home.

To this end she built up a cadre of dedicated agents, and infiltrated parts of the military-industrial complex. This is how she procured some advanced technology, including the curiously unstoppable Wargod suit – which also concealed her gender.

Her machinations attempted to trigger an insurrection (involving capturing her own father, a hawk, and his opponent, a more conservative senator). Though she nearly defeating Captain America several times, she was eventually taken down and unmasked by the Star-Spangled Avenger.

The last peekchur is a standard Wargod henchman in uniform.

A bit like a demented Randian who substituted “the military” for “the entrepreneurs”.

In her civilian guise Mora is all smile and charm, a proper young woman of excellent upbringing.

(As Mora) “I’m an Army girl, dad… I understand that information is restricted to a need to know basis. It’s a good security and defence policy !”

“What luck ! A chance for my might to destroy the symbol, and the champion defender of the weak… with their ’rights’ and ’freedom‘ !”

“Bah ! All that stupid talk about controlled power in a controlled system run by fools and cowards ! You’d never convince the opposition to give up their power, you *seize* power and *rule* !”

Who’d notice ? Besides the story was so inconsequential you may even have her fight the Guardian.

The humongous Weaponry score models what was in the story. OTOH you could easily consider that Cap had lower than normal scores during this story, and lower it to 10. 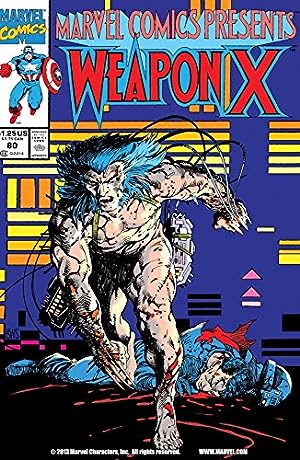 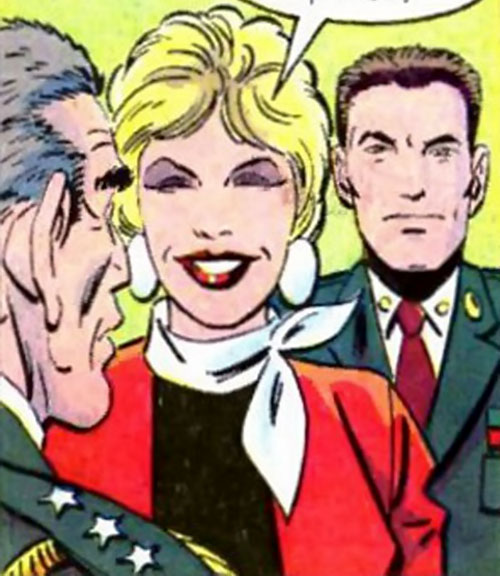 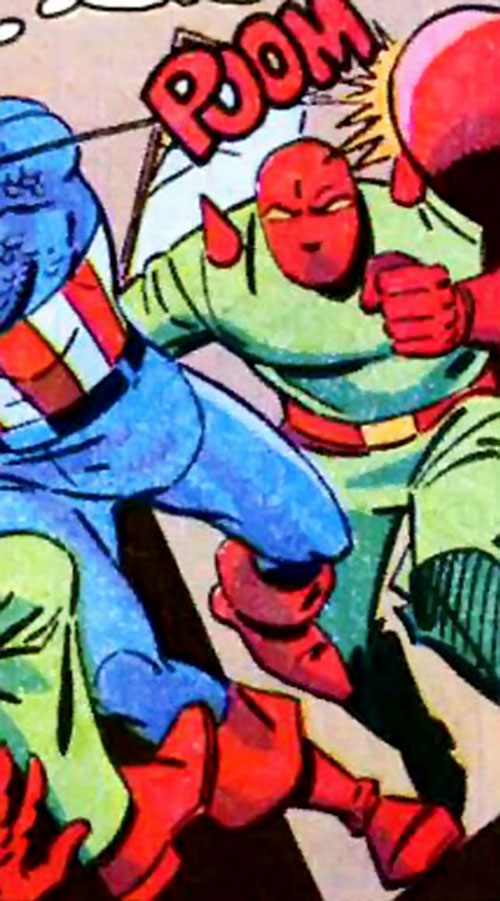