Warlock is an alien from the species known as The Technarchs. They originate from a corner of space far away from Earth. They are natural space-worthy travelers. They can fly in deep space at faster than light speeds and don’t suffer the ill effects of interstellar void. They can reshape their body at will, giving it any form or function they require.

In this species, the adults spawn numerous children. At the coming of age, the children have to kill their sire to survive, and the sire has to kill his spawns to gain more power.

Warlock lacks this natural aggressiveness. This is considered a mutation. It’s a less spectacular “mutant power” than an optic blast or a healing factor. Any mutant neutralizer will nullify Warlock’s meek nature whilst its effect lasts.

(See The New Mutants team’s writeups for further details of his adventures with them).

Warlock awakes to consciousness on his home planet, in an unidentified region of outer space (their home planet is named Kvrch ). His species is a sentient form where a unique parent spawns a great number of offspring. The species is genderless. All the children are raised in a crèche. They have to prove their right to exist by battling their parent to the death.

Warlock is the son of Magus, ruler of his native world and the most powerful of these Technarchs. But he is what could be assumed as a mutant in his own species. He lacks the aggressiveness necessary to hope to survive the battle with Magus. Scared of being slain in combat, he flees. Magus himself chases him through deep space.

The chase ends on Earth, near Xavier’s Mansion, after going through Asteroid M and sending Magneto to take a dive in the Atlantic.

Warlock takes refuge with The New Mutants. With the help of Doug Ramsey, they establish communication and help the alien’s recovery. Prof. X adopts him in the teenagers’ team. Meanwhile, the X-Men clash with Magus and force him to retreat, taking human form and starting the hunt for his spawn.

Warlock has several adventures with The New Mutants. All the while he uses television as a source of knowledge about human civilization.

After the “Mutants Massacre”, Magus finds Warlock. Illyana projects The New Mutants to Limbo. But Magus follows them there. Much more powerful than Warlock, he masters dimensional travel. 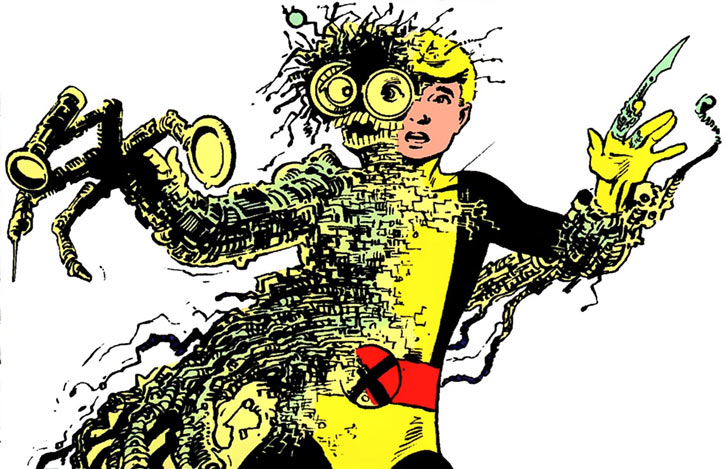 S’Ym is building up his coup against Magik. To weakened his son’s ally, Magus gives S’Ym the transmode virus. In turn, he gives it to lesser demons. Thanks to a failed stepping disc from Illyana, The New Mutants end joining The Starjammers and Pr X. Together, they battle Magus. The joined forces of The New Mutants, Professor X and The Starjammers finally defeat Magus.

Warlock joins Sunspot with The Fallen Angels. During this absence, The New Mutants go to Bird-Boy’s island. In a fierce battle against The Right, Doug Ramsey is killed. 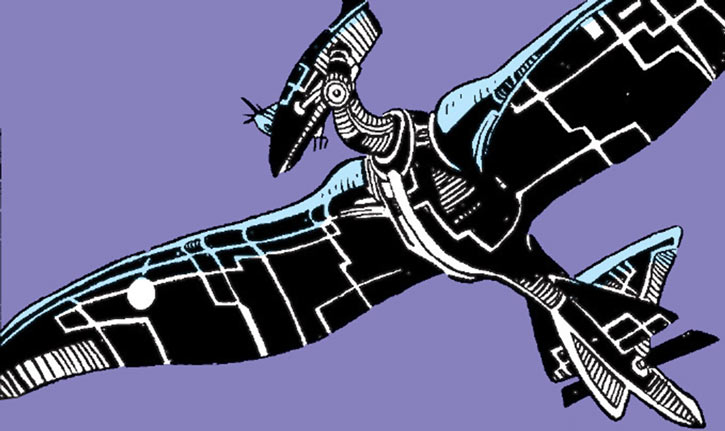 Warlock takes his death pretty badly. He even gets the corpse out of his casket, recreating the conditions of Romero’s Night of the Living Dead he recently watched on TV with Dani.

During the Inferno , S’Ym infects N’Astirh with the Transmode virus. This deep change in the demon’s structure gives him a direct access to the magic-computer created by Wiz Kid. It greatly enhances N’Astirh magical powers, and aggravates the crisis. He can now open his portal and maintain himself, without any human intermediary.

To close the portal, the X-Terminators destroy the computer. Meanwhile, The New Mutants retrieve the kidnapped mutant babies from the floating pentagram.

The mutant-repressing nation of Genosha captures Members of The New Mutants. The captor is Cameron Hodge, former head of PR for X-Factor. He plans to steal the Transmode Virus from Warlock.  Genoshan operative Pipeline’s transfer left Warlock weak. The New Mutants, though powerless, are willing to give him some life-energy. But Hodge interferes. 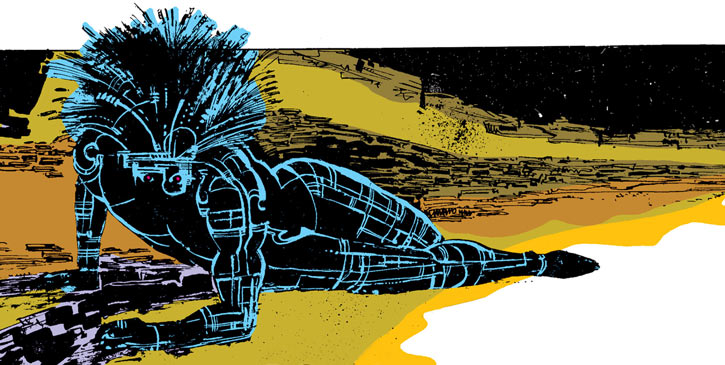 Warlock gets weaker and weaker. Hodge transfers him to his lab and starts to drain his Transmode Virus. Rahne, still depowered, tries to save him but fails. However, she interrupted the transfer process and Hodge didn’t steal the Transmode Virus. In the end, nothing is left of Warlock but a handful of ashes.

Warlock’s, and all Technarchs’, natural form is obviously alien. They’re covered with yellow/white glowing circuitry on a deep black body. They’re mainly humanoid. They have long arms and long legs. Their face barely have any features, except eyes that may be over-sized and protruding. They are made of living circuitry.

They kind of look like one of Tolkien’s Ent , only human sized and made of organic circuitry instead of wood.

However, they can take any appearance, even a normal, human one.

Warlock’s body and limbs are rather thin.

Warlock has difficulties keeping focused. When he takes a human form, if anything out of the ordinary shows up, he can’t help but display some part of his circuitry form. He usually does this to do a functional transformation, and it shows (like growing a pair of binocular in front of his eyes to see further if he thought something is incoming).

It can also be an emotional spike, in which case he lets a part of his circuitry-like skin to show.

When he shape-changes to get a functional transformation, his form is often inspired by elements from TV shows or movies (like starships from Star Trek or Star Wars, or a mecha  from japananimes or characters from cartoons…). When he is weak or in strong emotional turmoil, he merely splashes as a shapely pool of organic circuitry goo.

Warlock’s mindset is clearly alien. He has troubles with the concept of individuals. He has to qualify any interacting entity with its purpose or situation. His speech uses only (well nearly only) neutral third persons, singular or plural.

He refers to his friends as “Selfriend-Name does” (like Selfriend-Rahne or Selfriend-Sam). He refers to himself as “Self does”. Several friends are “Selfriends do”… He’s analytic of everything around him. He constantly makes aloud statements of his observations and emotions, like “Alarm ! Distress ! Magus detected….”

Warlock is a bit of a coward. If left alone, without any other Selfriend, he might just flee from battle. When close to any Selfriend, he has a sense of purpose and stands his ground (except in front of Magus). His bond with Doug Ramsey (Cypher) further reduces his cowardice when they are together.

Magus and Warlock are referred as “he”. Their name are rather male. When warlock takes a human appearance, he’s male. However, there is no real mention of gender for the technarch. They likely are asexual, reproducing by parthenogenesis or cloning.

Combined with his alien physiology, it makes him rather immune to any seduction attempt by humans (any gender).

Warlock’s mutant attribute is the lack of his species aggressiveness. If his “mutant power” is neutralized, he will start being overtly arrogant and rude. He might attack his former Selfriends, now considering them as inferior lifeforms.

Talking to the Blackbird (Yes! The X-Men plane): “Self wishes to express thanks to you, noble entity, for transporting Self and companions to this habitat.”

“Self has heard and seen enough Once-Friend ! You lied to Self !…”

Sam: “Thanks for the lift Daffy!”
Warlock: “Quack… Selfriend-Sam is welcome… Quack.” 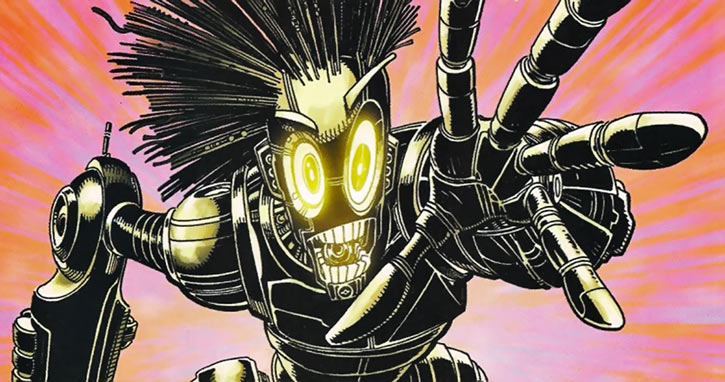 Doug (inside a Warlock mecha armor): “Hey, ‘Lock ! Do we make a team supreme or what ?”
Warlock: “Self has no complaints, Friend-Doug. If Selfriend is happy, Self is happy.”

Warlock’s fear of Magus should be role-played with over-exaggeration.
If the roll succeeds (11 for SIF or 5 for MIF), Warlock is still shaken, and borderline fleeing the scene.
If the roll fails during a confrontation he will flee with loud “ALARM! SCREAM! DANGER!” (fleeing is the usual reaction to a failed roll).
If the roll fails while not facing Magus (mention of his name or detection of his presence), he dilutes, meeting the Power Loss condition.

It’s a very aggressive species. They all have Catastrophic Rage.

What is considered a mutation for Warlock is his lack of this aggressiveness. That’s why he hasn’t any Rage drawback.

A mutant’s neutralizer (like the Morlock Leech or Forge’s Neutralizer) would not target any of his ability or power. It would restore his species’ Catastrophic Rage. As there’s no power’s AP to use as OV/RV, use Warlock’s Int/Min.

Technarchs’ natural form is obviously alien. It’s made of techno-organic material looking like yellow/white glowing circuitry on black. They have the ability to shape their body at will. It allows them to take any appearance, human or otherwise, or to take any functional form. They can’t do both at the same time.

Every time they take a functional form, it has their original techno-organic look.

Warlock prolonged exposure to Earth’s TV programs gives him inspiration. Some examples are:

However, each time they are Stunned (RAP of damage equal or higher than their Resisting Attribute), they must revert to their natural state and drop the Self Manipulation (or/and Chameleon). They can bring it back the next round, but if they were carrying something, it’s now falling. If they were taking another appearance, it’s now exposed.

Furthermore, when they experience a heavy stress, they even lose their integral original form, turning into something like a pool of techno-organic goo. If their current body condition is reduced to 1, both Self manipulation and Chameleon are lost. Their Dex drops to 0, making them sitting ducks. Their stretching drops to 1, barely allowing them to move like flowing goo.

They recover as soon as their Body is restored above half their initial Body stat (see below). In the case of Warlock, this also happens under strong emotions. His CIF provokes it, and it lasts until he overcomes it. For other emotional states, it’s up to the GM (like when he learns of Doug’s death).

The Technarchs cannot feed or heal as other creatures do. They must first transform organic matter in a techno-organic construct of electronic-like circuitry. The living force is replaced by a more direct form of electronic-like energy. Then, they drain the inner energy to feed.

It leaves an empty shell, made of electronic-like circuitry, but devoid of any energy. A completely transformed and drained target is killed.

The transformation does not have to be complete to allow feeding. The target can survive and recover. If ever they are unconscious, their energy drain power can still work but at a slow rate, and energy or organic life must be present nearby.

They can also feed and heal by plugging on a direct electric energy source. The output cannot be too powerful (a regular house wall power outlet or the power source of a computer).

Any creature losing Body points because of the Cell Rot power (as long as current Body is not reduced below opposite of Body, for that means drained dead), can be partially transformed in a Technarch alien, acquiring part of their abilities. It is not clear if this infection is controlled by the technarch. Magus did it on S’Ym, who later did it on N’Astirh.

But these targets were tough, so we could assume they were infected because they survived. It is also not clear if the infection can be resisted (Warlock speaks of “…might infect you with Transmode Virus…”). It could, however, be willingly accepted (like S’Ym and N’Astirh did).

Thus Technarchs possess the Bestow power, with the following bonus and limitations:

Warlock never used this ability, even with his several feeding from a willing Doug Ramsey (indeed, Warlock and Doug hardly have the HP to Bestow). His father Magus did it on S’Ym who, in turn, used it on other Limbo Demons (and N’Astirh). We can assume it’s only available to fully grown Technarch adults or mature, sentient, infected creatures (like S’Ym).

Source of Character: Marvel Comics (The New Mutants v1 up to The X-Tinction Agenda). 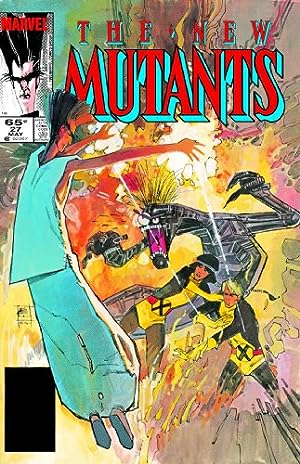 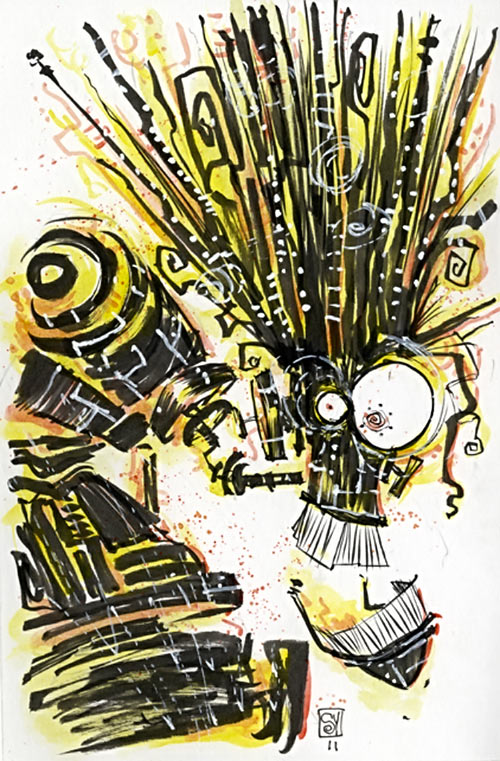 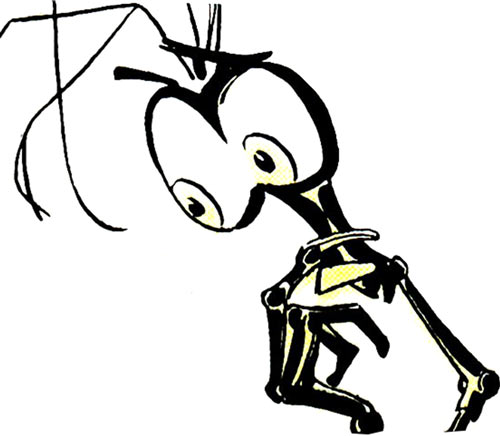 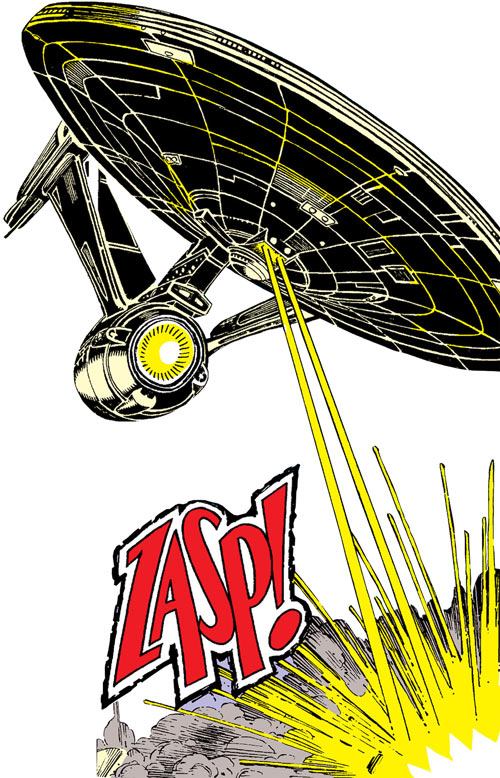 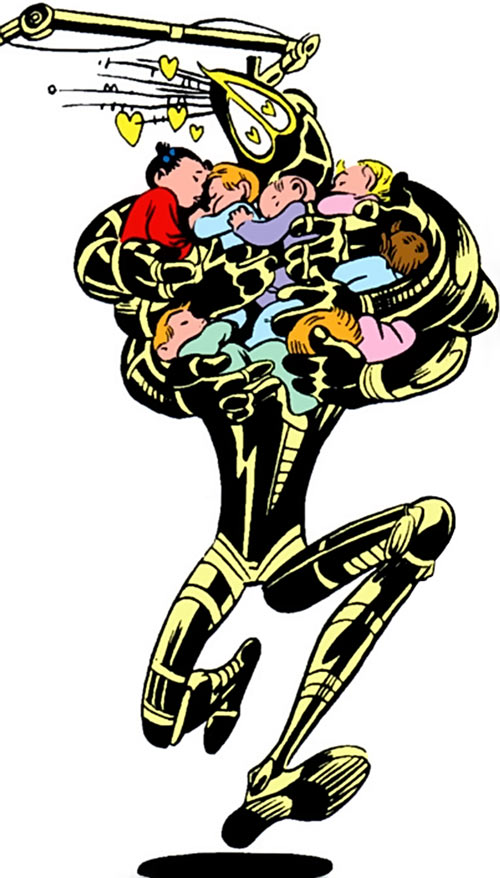 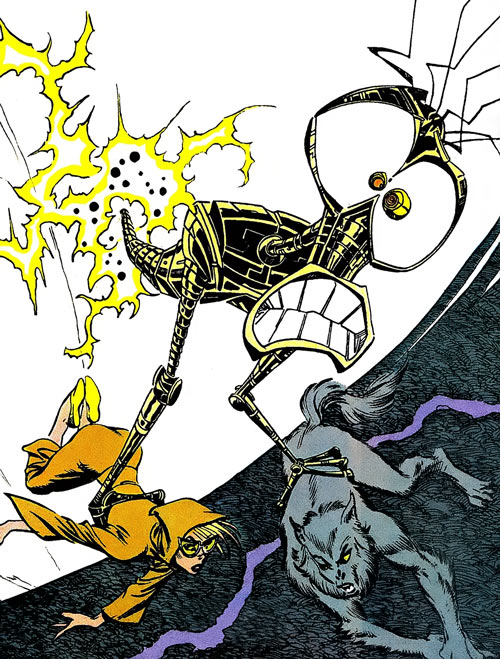 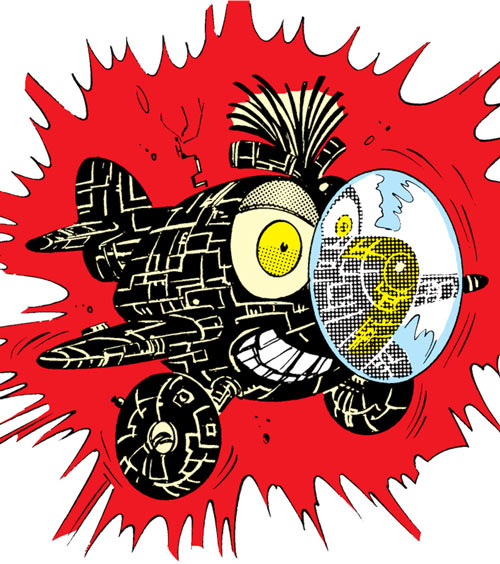 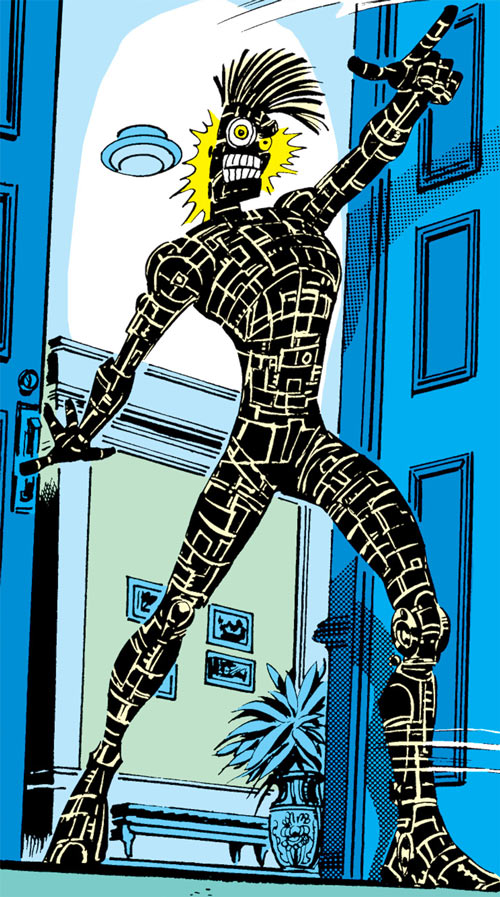 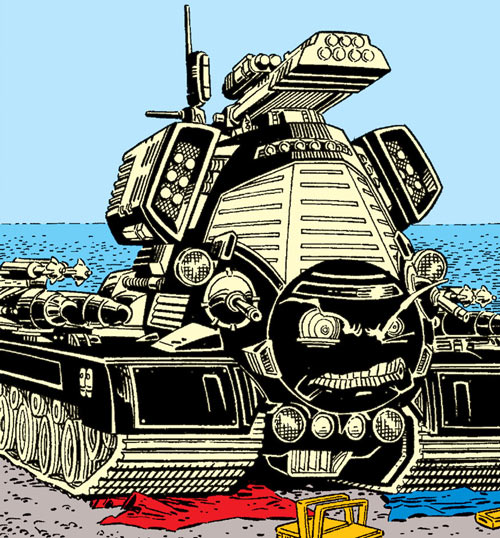 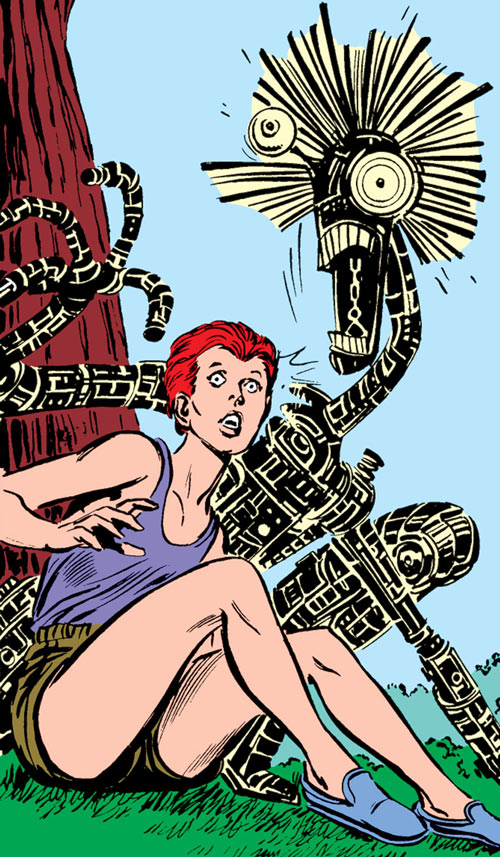 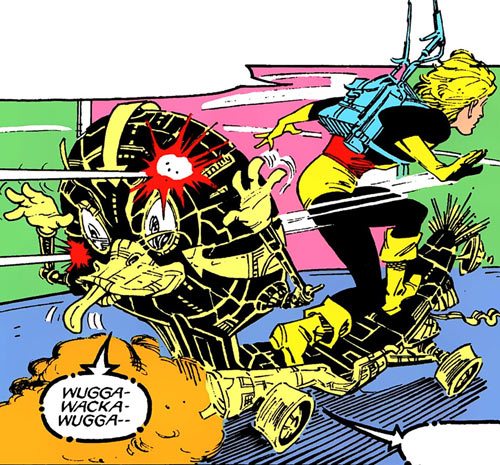 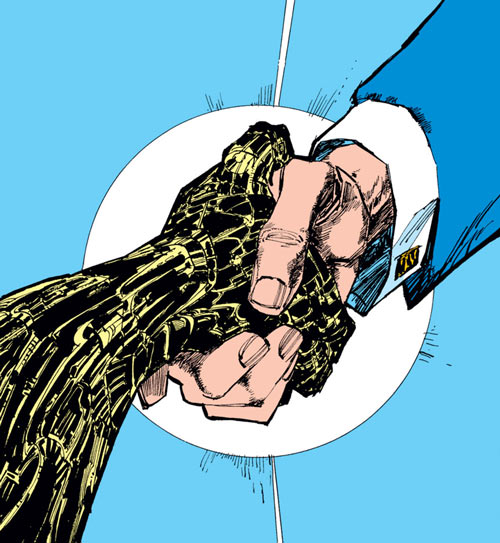 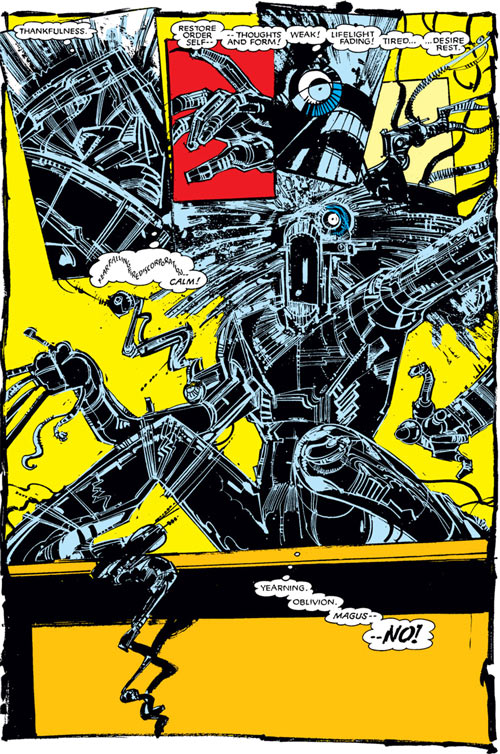