The Warlock has great sorcerous powers. He relies entirely on these in battle.

The dimension called the Other Side of the World was not created with a big bang like our own universe, but rather with a steady flow of matter. This resulted in a place where time as we know it does not exist. There, nothing ages or dies. If something is destroyed it is immediately replaced.

Also, there is only one person there, which we know as the Warlock of Ys.

In time he grew bored with his world and, with the aid of his magic mirror, saw Earth. He longed to go there, to experience new things and perhaps to conquer, but even with his powers he couldn’t leave his world.

Yet he was able to contact the Senes. These were priestesses of the god Toutatis, in what is now Bretagne. He directed their construction of the Gate of the Blue Flame, leading to the Other Side of the World.

In the time of Julius Caesar, a Roman centurion was the first known to have stumbled through this gateway. He became lost in the timeless dimension.

By the late fifth century, good king Gradlon came to the throne of Cornouaille. He was a devout and godly man, but his daughter Dahut was evil, delighting in all sins. Still, her father adored her and gave whatever she desired.

At her request, he built the great Ker-Is (the city of Ys ) in the baie de Douarnenez . There was a huge dike to keep the sea out. The great bronze doors could be opened only with a silver key which Gradlon wore on a golden chain about his neck.

Dahut took as her lover Lucifer himself. He demanded of her, as proof of her love, the key to the dike. She stole it, and Lucifer used it to open the gates at flood tide and drown the city. Only the good Gradlon escaped. It is said that Dahut became a siren, luring men to their watery graves.

Because the Gate of the Blue Flame was near the site of Ys, it was said to be connected with it, and from it the Warlock took his name.

When Zatanna, seeking her father, reached the Other Side of the World, she found the Warlock sending a magical creation to lure Green Lantern (Hal Jordan) there. The sorcerer believed only the power ring could enable him to enter Earth’s universe.

Working together, Zatanna and Green Lantern beat the Warlock. They left him alive, but motionless and stripped of his magic.

Yet he had worked one last spell. It caused his and GL’s life energies to slowly transfer, so that, a few years later, they changed places. GL, minus his ring, was motionless in the Warlock’s tower, while The Warlock was posing as GL. Zatanna was placed under a spell to keep her from warning anyone else of what had happened.

Nevertheless, she managed to get word to some of the JLA members. They helped track down the Warlock at Angkor Wat  and free GL. He again defeated the Warlock, who was returned to his world, again powerless.

The people who had gone through the Blue Flame are still there. Never aging, but now no longer ruled by the Warlock.

Warlock of Ys (aka Lord Ys)

Advantages:
Area Knowledge (Other Side of the World).

Drawbacks:
Misc.: the *only* way the Warlock can go to Earth is to switch places (using Sorcery as Dimension Travel) with a SPIRIT 09+ person.

Compiled by Sébastien Andrivet (stats from Atlas of the DCU, history from Who’s Who). 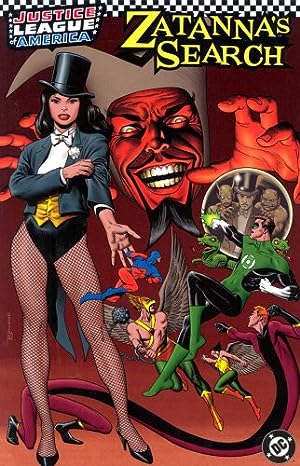