He also upgraded his handgun to an Automag during his last stay on Earth. The high-powered ammunition allowing to perform what amount to sniper shots with a mere, unscoped handgun.

US Air Force  pilot Travis Morgan became a widower when his wife Rachel was killed in an automobile accident. Their daughter Jennifer was then eight years old. Believing life on Air Force bases was inappropriate for her, Morgan sent her to live with her aunt Marie.

Morgan was later sent by the Pentagon on a secret aerial spy mission to photograph a new Soviet installation. The Soviets fired missiles at his plane. Though the missiles did not hit it, the explosion of one missile damaged Morgan’s jet, causing a severe fuel leak. Heading to Alaska over the North pole, Morgan finally ran out of fuel.

Parachuting from the plane, Morgan descended through an interdimensional nexus from Earth’s arctic region to the otherdimensional realm of Skartaris . Soon he rescued Tara, the heir to the throne of the city of Shamballah, from a carnivorous dinosaur. Morgan and Tara were captured and brought to the city of Thera, where he first encountered his archfoe, the high priest Deimos.

Tara taught Morgan her language, and they escaped from Thera. She also tutored him in swordsmanship. Later Morgan was enslaved and trained as a gladiator. He led other gladiators to freedom, and intended to bring liberty to the people of Skartaris.

Travis Morgan became known in Skartaris as the great warrior called the Warlord. He eventually married Tara, who became ruler of Shamballah, and they had a son, Joshua.

Deimos kidnapped Joshua and used advanced technology to clone the baby and then advance the clone rapidly to adulthood. Morgan, thinking the clone was his true son, was forced to shoot and kill the clone in battle. Morgan now believed his son to be dead, when actually Joshua was brought up by peasants and still lives under the name of Tinder.

The Warlord has made some notable friends and allies, including Machiste, Mariah and Shakira. His daughter Jennifer came to Skartaris in search of him, and became the realm’s supreme sorceress.

The Warlord has seemingly abandoned his dream of bringing liberty to all of Skartaris, but is continually going on far-flung adventures. His marriage to Tara has undergone strains, but is still strong. More recently, the Warlord has played a major role in freeing Shamballah from conquest from the forces of New Atlantis, thus helping restore Tara to her throne.

In 1990, the Warlord went back to Earth to discover what had been going on on Earth for the last 20 years. He was less than pleased, and had trouble explaining his disappearance to the military. As a result, he went back to Skartaris.

The Warlord’s hair style is very similar to the first Green Arrow’s which led to extremely violent confusion on one occasion.

Morgan is a study in contradictions. At heart, he’s an idealist ; he believes strongly in human rights and despises tyranny and corruption. But he’s found that human nature (including his own) often falls short of his lofty ideals. Thus, his many disappointments have left him bitter and cynical.

He has a strong sense of loyalty to his friends and comrades, but he is also cursed with wanderlust and a love of adventure. He’ll fight against overwhelming odds to be reunited with his wife Tara, then turn around and abandon her again to pursue some new quest.

He is hot-tempered and brutal in combat, but in quieter moments he is prone to bouts of depression, brooding over past failures.

“I kind of wonder… what happened to all those bright kids who were going to change the world ? Maybe they didn’t care enough after all… More women are working now, which is fine. And more men are wearing earrings, which is… weird. ”Liberal” has become a dirty word, but at least Teddy Kennedy never got to be president, indicating the country hasn’t totally lost its mind. Except that doesn’t explain Ronald Reagan . Somebody should have told him that there’s more to being president than remembering your lines and not bumping into the furniture. Did you know Elvis Presley  is dead ? And Ricky Nelson . Bing Crosby . Jack Benny . John Wayne . And most of what I knew… tradition… values. I hear we lost that stupid war. Hell, I could have told them that was coming.”

“I once had a dream for this world of yours, Shakira. I saw Skartaris as a place where all men could live in freedom and equality, with equal justice for the smallest and the greatest ! Maybe that dream still burns somewhere in my soul. Or maybe it’s simply that I never feel so alive as when the scent of blood and the sound of battle are in the air and a stout blade is in my hand !”

Compiled by Sébastien Andrivet and JKCarrier (stats from Atlas of the DCU, history from Who’s Who). 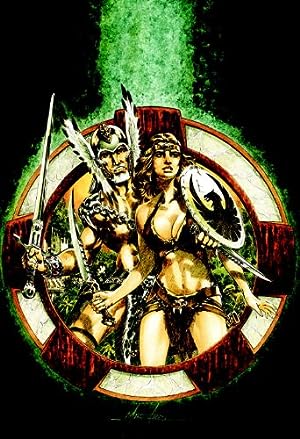 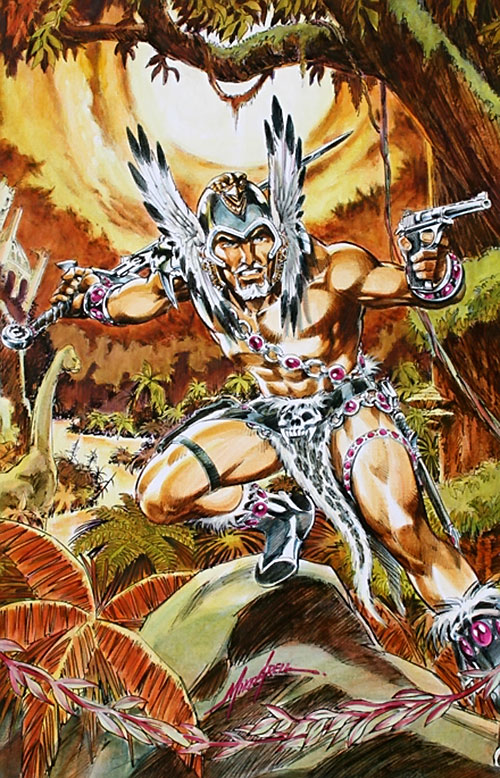