Sawyer’s body was transformed into a coherent energy field. It phases  out of normal reality, rendering his insubstantial and invisible in his native reality. In this form he no longer needs to breathe.

A suit of armour was designed to contain this field, allowing him to interact with the real world. The suit also provides him with:

He can also broadcast on certain wavelengths which can disrupt human thought patterns. This is especially effective against foes with super senses.

This weapon is capable of affecting the likes of Green Lantern (okay, Rayner) and Superman, but this can only be projected through his armour.

(The International Ultramarine Corps entry has most of his history.)

Sawyer served in the marines  when he selected for the Ultramarines project. The process transformed his body into a coherent energy field.

Warmaker One was a consummate soldier. He is loyal to his team mates and always obeying the chain of command, certain that his superiors knew best. 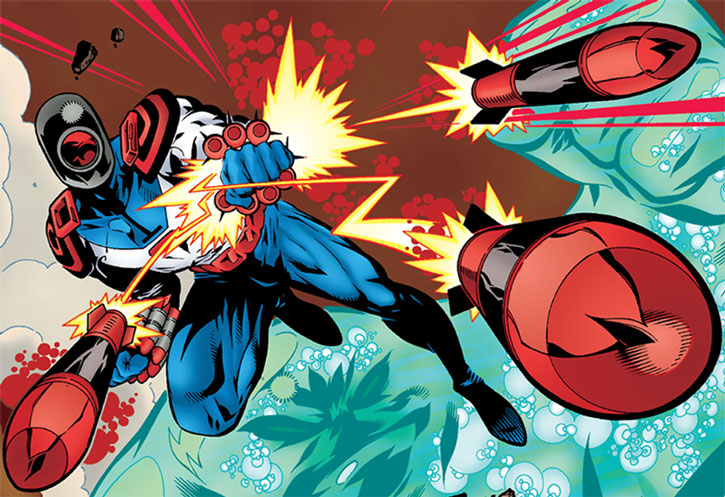 After his unit deserts, he still retains his loyalty to his team mates. But he now relies only on their, and his, judgements, for determining his course of actions. He still has trouble deviating from a course of action once he’s begun, but he is more open to persuasion.

He’s very serious, trying to live up to his billing as the ultimate weapon. However, he has issues with the changes that his body has undergone, which he has yet to fully deal with.

Like the other original Ultramarines, Warmaker One is a super-soldier rather than a super-hero. As such, he is willing to kill opponents if he feels it is necessary.

“I’m overloading your super-senses with broadcasts on every available wavelength of the electromagnetic spectrum. You betrayed your country. I have orders to execute you, Superman. May God forgive me.”

“Superbia hereby declares its independence from all nations and opens its gates to super-champions from the four corners of the Earth. We intend to serve as a first-strike global peacekeeping force. We will kill if we have to. If we have to, we’ll let you know. Terrorists, despots, corrupt businessmen. the International Ultramarine Corps is here. There’s nowhere to hide.”

“The JLA is AWOL. These terrorists are, quite literally, animals. Wanna bet the International Ultramarines Corps can wrap this little insurrection up in… what ? Let’s give it ten minutes ? Who needs the Justice League ? Shock and awe, gentlemen.”

During his original appearance he was equipped with a single Tactical Atomic Bullet [Projectile Weapon: 14, Sharpness (Projectile Weapon): 08], intended to be used against Superman.

It’s uncertain whether some abilities are derived from his powers or his suit, so I’ve just made a best guess at them. 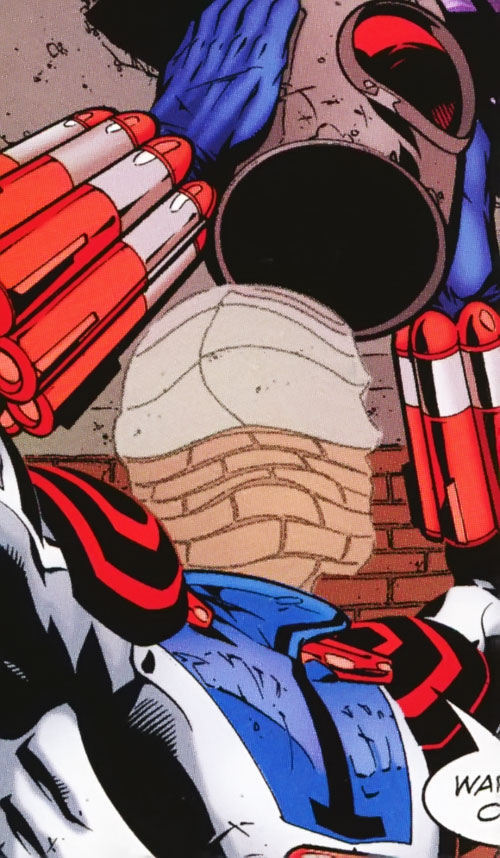