Warmaker has a high level of superhuman strength and durability, allowing him to engage beings such as Grace or Titan in hand-to-hand combat.

He’s also a weapons expert, a fearsome hand-to-hand combatant and a ruthless tactician.

His armor pieces (mostly the forearm and shoulder pieces) can somehow morph into a seemingly unlimited array of powerful weapons such as mini-howitzers, gattling guns, missile launchers, etc.. The metal seems somehow fluid when Warmaker morphes  a weapon into existence.

Warmaker was a super soldier for the US government. But he left over various differences, including a growing distaste for wetwork.

The situation rapidly went south. He single-handedly forced his way into the White House, holding the President and a tour group hostage. Grace teleported in and defeated him, and had no choice but to imprison him in her town, Golden City.

However, Grace had a plan. She allowed Warmaker to free himself – a fact known only to her lieutenant, Madison. He rampaged in Golden City and fought the Agents of Change. This battle that saw the accidental death of Rhapsody.

The people of Golden City had already a strong anti-Washington stance. Seeing their city damaged by the US Army’s trash gave Grace the last straw she needed to declare Golden City’s independence from the US.

Warmaker joined the Agents of Change after some discussion with Grace. He fought along with them against the US invasion on Golden City.

However, when Grace disappeared during a battle with the power-mad Titan, he decided that his deal with Grace was over. He was to leave Golden City, which had been plunged into turmoil due to Grace’s absence.

Madison convinced him of working along with the Agents to save Golden City. But when Law arrived and reported the death of Grace, Warmaker decided to leave Golden City after all. He sought to find Grace, as he was convinced that she wasn’t dead.

Law sent a woman who could change her apparent age to seduce him. Warmaker was thus discredited with a carefully orchestrated child abuse scandal. He joined Grace again when Law died.

Arrogant, amoral, aggressive brick . He has a military mindset. But whereas Mecha is of the “duty first” school of military thought, Warmaker is more in the “it takes what it takes to reach the objectives” vein. And he will not invest himself above and beyond orders.

He tends to be quite bullheaded. Especially since he’s pretty much invulnerable, having demonstrated and ability to survive a FAE charge at close range.

In private, he’s a simple, rough guy who likes beer, pool and hanging around. At least, when he does not catch a sight of himself in the mirror and feels anger at what the Army turned him into.

Although he hid it well, he admired Grace and was devastated when she was reported dead.

“Weaponry back on line and fully functional. You ready to crawl and beg yet ?”

Warmaker is a brutal, efficient and powerful military agent that can be used anywhere.

Bonuses and Limitations:
Density increase is Always On (-1) and already factored in. 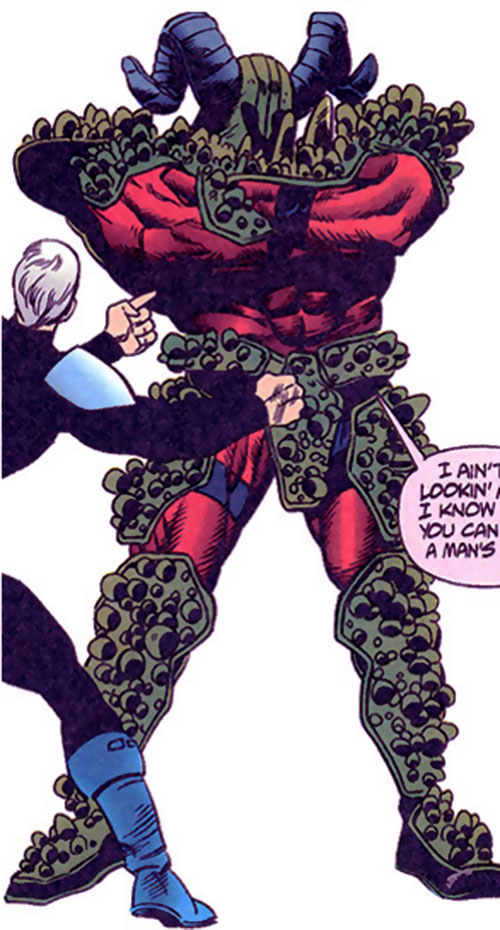