Warstrike was one of Malibu Comics’ Ultraverse characters. Curiously, he had his own brief-lived book in 1994. But he’s a generally useful archetype as a C-list “guns and ‘tude” Iron Age  hero.

These here notes are current up to the Godwheel crossover, as most of our Ultraverse writeups. This thus does not cover Warstrike’s subsequent role in the Exiles team.

He has been enhanced with wetware allowing him to regenerate himself. Reliable, however, this power is not.

When under stress, Warstrike can sometimes get “on the wire”. This grants whim short range precognitive abilities. These allow him to see the possible outcomes and possibilities of the situation he’s in. Which is used to perform unusual dodges, land blows or shots in unlikely circumstances, for tactical manoeuvring, etc.

Warstrike once performed psychometry. Meaning that he visualised the past while holding an object associated to it.

A particularly impressive piece of gear is his custom bike. It has :

Brandon Tark’s father built a fortune, but was hit by early onset dementia when Brandon was a teenager. The immature Brandon just wanted to live a fantasy life, and gave business matter minimal attention. He simply hired reasonably skilled people to maintain them and only occasionally intervened.

Somehow, Tark learned about the secret wetware technology developed by JD Hunt’s researchers. He even managed to obtain wetware implants enhancing his physical abilities. This presumably cost a bundle. He next developed a big tough super-hero persona complete with bright spandex, huge guns and war paint.

But this escape in fantasy caught up with him. His secret identity was discovered by unspecified, ruthless opponents. They ambushed him while he was having lunch in a park. The attack slew his trophy wife and little girl.

Tark further retreated into his fantasy world of Warstrike, working as a tough-guy mercenary. One such job had him duped by an agent of Boneyard. Warstrike thus slew one of the Archmage’s warriors, Lukasz. The Archmage having been captured, Lukasz reincarnated in a woman’s body and became Mantra.

Warstrike later understood he had been played for a fool. He thus allied with Mantra, who was just discovering her powers. The pair beat back the Boneyard agents known to Warstrike.

Warstrike is strong in body, but low in Hero Points , mind and spirit. He’s a 26-year-old teenager, overcompensating for his awkwardness and shallow soul by acting out fantasies involving bright spandex, big guns, tough attitudes and no responsibility.

As Warstrike he’s an action hero with an attitude and unremarkable one-liners. As Tark he’s a shallow rich and handsome man throwing money at problems. He’s unable to commit himself and enter any kind of relationship, including non-casual friendship.

He’ll occasionally have episodes involving light fugues or flashbacks, or denial that some situations may emotionally hurt him. His fits of impatience, and his way of drifting away from people asking him to act responsibly, are typical of his immaturity.

While Warstrike is rash and acts with deadly force, he’s not a deliberate killer. He’s also willing to sacrifice himself to protect others. Overall, he acts likes he wants to be a cross between James Bond, the Punisher and Shaft.

“You’ve been hired for this ? You don’t even have the guts to come after me without someone shoving a paycheck in your face ?”

I couldn’t select a level of Dumb Luck that wouldn’t cause problems. So I eventually went with a Power Reserve – it’s not ideal, but it’s predictable. 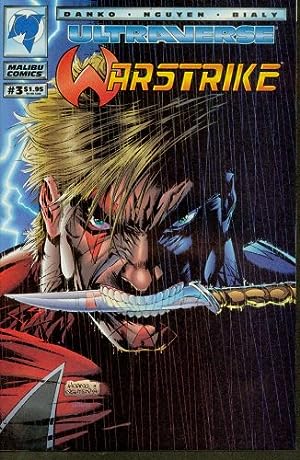 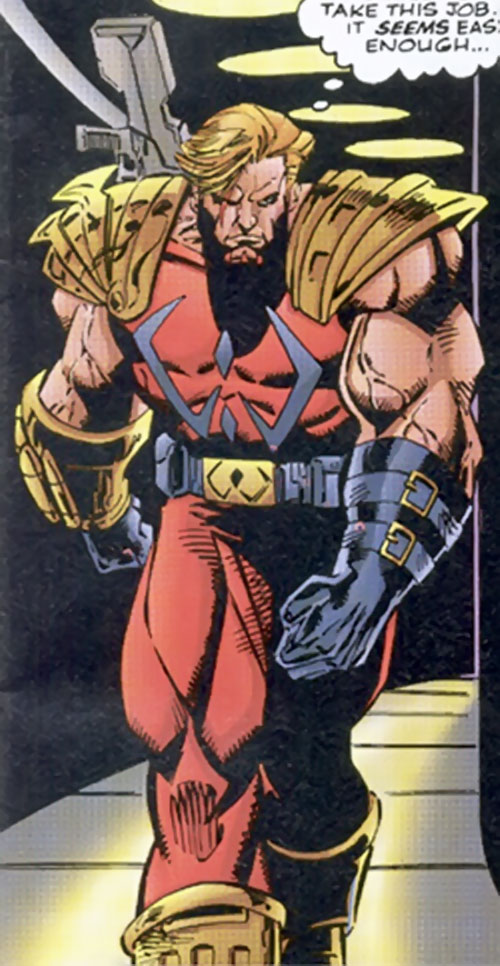