There are about 1,000 Watchdogs in the Southern USA states. The head of the militia is simply called Dog One. Each realm (State) is ruled by a Head Dog and a Pack Leader heads each pack (local unit). Individual members refers to each other as “Brother Dog”.

The Watchdogs were created (or, more probably, infiltrated and financed) by Nazi conspirator the Red Skull. That was when he used the disguise of John Smith, CEO, as a part of one of his multiple conspiracies to subvert the USA.

The Watchdogs started a violent Fascist campaign against what they see as “corruptors” of society. This included pornography, abortion, the teaching of evolution, “immoral” books, etc… They were armed and generally weren’t afraid of killing, though some of the individual members weren’t as bloodthirsty.

As they maintained vague deniability, they were well-received the most fanatic puritans, some TV preachers and many like-minded people.

The Super-Human Activities Commission, which was at that time training John Walker and Lemar Hoskins as the new Captain America and Bucky, sent those two to infiltrate the group. Walker was uncertain about it all since he shared values with the Watchdogs. He also felt uneasy with working in the same area where he was born and raised. In fact, his best childhood friend now was a Watchdog. 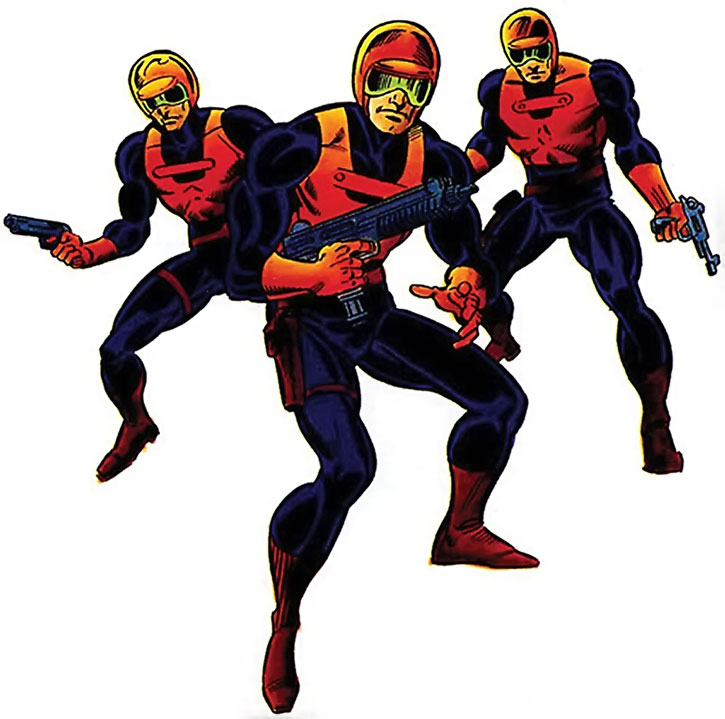 A full narration of their adventure can be found at the Battlestar character profile. After that successful raid, the new Captain started a campaign against the Watchdogs. He destroyed many of their cells and jailed 22 of their members.

When two ex-teammates of the new Cap revealed his true identity in front of national TV, the Watchdogs moved fast. They kidnapped his parents and demanded his surrender. Walker agreed. The militiamen could have killed Cap at the moment he surrender. But having a sense of tradition, they instead chose to hang him in front of his parents.

Cap made an escape attempt and a gunfight started. Without his shield, Walker couldn’t prevent the cold blood murder of his parents, Emily and Caleb. In shock, Walker killed nine fanatics and seriously injured 16. Afterwards, he held the bodies of his parents and talked to them as if they were still alive.

The belly is still fecund

The Watchdogs were soon reborn from their ashes. But they were used as cannonfodder by a manipulative TV preacher who was in fact a drug dealer. They were stopped by Silver Sable and her new Wild Pack.

One of the ’Dogs resisted torture at the hands of a sadistic Wild Pack member. Instead, the man was persuaded by Sable to confess when she told him the preacher had lied to the faithful.

The Watchdogs act and talk in the lynch mob tradition. Unlike most of their predecessors, they don’t seem openly racist. Dogs do not attack people due to their skin color alone, though they may well act prejudiced. They instead focus on what they consider immoral ideas and acts. Their membership seems to be 95+% men.

Some of their members join the Watchdogs thinking they are propaganda workers, fighters for a “cleaner” America. They usually feel disappointed by the group’s violent activism.

Old South is a little empty in DC. They could fit in perfecty, probably having worked in St Rock or near the bayou in Louisiana. They could easily be foes of Hawkgirl.

The romance between Swamp Thing and Abigail Cable would be seen as a mortal moral menace for the Watchdogs. They probably will try to destroy Swamp Thing with firethrowers or defoliant, kidnaping Abby or Tefe, etc. Probably the Thing would work with Batman to rescue his/its family.

“John Henry” from the excellent The New Frontier  Elseworlds  tale could easily have clashed with a predecessor of the Watchdogs. Perhaps the Dogs of yersteryear and the Klan were enemies.

Initiation vow:
“I solemny vow to walk the virtuous path, to safeguard society from the forces that would corrupt it, and destroy the enemies of decency, of morality, and of the values upon which our country was founded.”

Advantages:
Extensive Headquarters (disguised as patriotically-themed clubs and bars) and likely Local Hero (reactionaries); some of them probably have Area Knowledge (their area).

Drawbacks:
Secret Identity, MIA/SIA (to their cause). Their leaders also have a Dark Secret (being financed by Red Skull), some newbies have Uncertainty (they will freeze if they have to commit murder or the like).

Some of them likely have ex-military backgrounds and may have Military Science (only some skills): 03, Medicine (First Aid): 02 or Thief (Stealth): 03.

Their team leaders also probably have Charisma (Persuasion): 03, mostly used as oratory skills in their meeting. These leaders also have 10 HPs and are usually visibly distinguishable by a moustache and a small beard (as opposed to the clean-shaven rank and file). 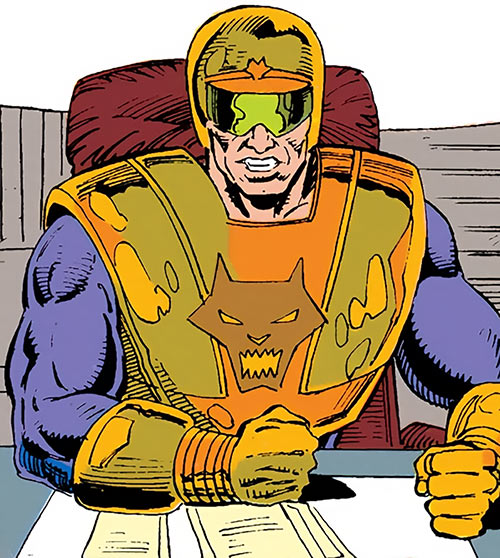