Darby is a former Olympic diving champion, and an accomplished swimmer. He remained in good shape.

As the Water Sprite he wore an horrible mask that altered his voice to make it sound watery and supernatural.

He also wore a layer of grease over his body, allowing him to escape even the superhuman grip of the Man of Steel.

Lastly, Darby was experienced in construction, and municipal politics.

A champion diver and swimmer, K. Darby won a diving medal during the 1936 Olympic Games – the ones with Jesse Owens .

He then retired from sports to become a construction entrepreneur, selling dams to East Coast municipalities.

By 1945, he was working on a sale in Annisdale, a rural burg not far from Metropolis. But the Mayor was opposed to the project. He thought that the existing levee was fine – even though it had been overflowed before.

Yet the Mayor was more right than he knew. Darby was planning to secretly use substandard materials and pocket the additional margin.

To ram the sale through, Darby came up with a strange plan.

He convincingly disguised himself as an aquatic supernatural, the Water Sprite. He then used his swimming talents as part of a campaign of terror and sabotage. It had two goals :

As the disguised Water Sprite, he spoke in a poetic way, made numerous allusions to protecting the natural flow of water and serving Neptune, and left seaweed behind as his calling card.

One such scary apparition caught the attention of the Daily Planet. Though Lois Lane and Clark Kent were sceptical about the tales of water spirits, they witnessed the “monster” attacking the levee.

Superman intervened and prevented a flooding in Annisdale, but couldn’t capture the slippery “spirit”.

And it would have worked, too…

The Planet article about the levee break galvanised Darby’s supporters, and the Mayor soon had to authorise the building of a dam. The Water Sprite continued to make appearances, and escaped from Superman a second time.

However, Supes accidentally learned that Darby had been a diving champ. This, and observing the materials used in the dam’s construction, let him deduce the truth.

As Kent, he set up a trap for the Water Sprite. There Superman captured and unmasked Darby, using his cape as a sort of net to counter the grease layer.

The Water Sprite’s mask is remarkably lifelike, and horrible. Even Lois Lane (well, 1945 Lois Lane) fainted when faced by this creature.

Darby seemed to be an enthusiastic, upbeat entrepreneur. There isn’t much more to say from this 13-page story.

(Sabotaging the levee) “Rash is the being who dares close the tap and imprison the free flow of the sacred water. Gush forth, o gurgling fount !”

“Let those who trammel up the iridescent waters, beware !”

Bonuses and Limitations:
Acrobatics (Athletics) is limited to aquatic applications. 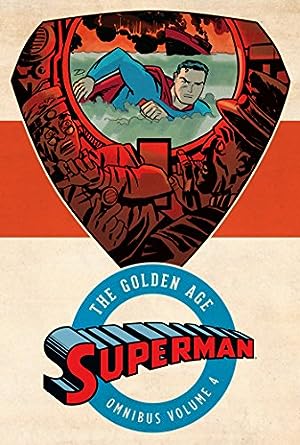 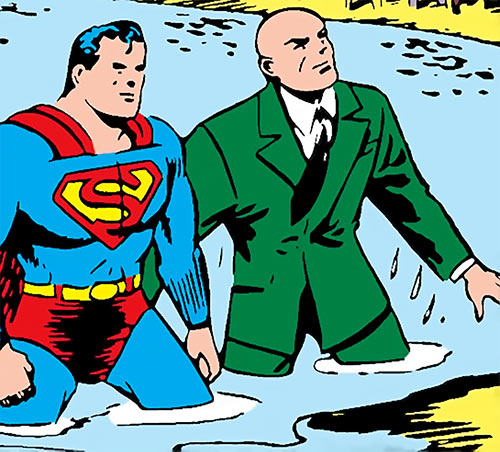