There apparently has been further material since this profile was done.

Weapon Brown is a dangerous mercenary combatant. He is quite accustomed to life in the post-apocalyptic wastelands.

He regularly spends Hero Points  to make near-impossible trick shots with his normal and cyborg weapons.

After a major nuclear and biochemical war, the inhabited world is mostly desert-like. The bar stops, living quarters and other old world remnants far apart. While there are no more cities, there are a few more densely populated areas. But these are in in very degraded, ruined condition. Wildlife is mutated (for example, into kite eating, walking trees) as are some humanoids.

A boy named Charlie Brown grew up in the shadow of the war. As an adult was rebuilt into a cyborg by a Dr. Lucy van Pelt. He was renamed Weapon Brown, and his memory of this origin was completely wiped. For a long while thereafter he used to work for an organization simply just called the Syndicate.

During this time he seems to have worked with a bounty hunter named Shermy, who later disappeared when he entered a toxic zone. In Project Peanuts, where Brown was rebuilt, another weapon, Linus and his Blanket, was created.

Weapon Brown, the merc cyborg, now roams the wastelands for his own purposes, normally using a car. He is accompanied by his dog, Snoop the mean dog.

Many years later, Brown was looking for Linus who he knew held his read-headed love hostage. Brown tracked down Linus in his underground lab as he was planning to sacrifice the red-headed woman. Brown fought the quasi-sentient, polymer-based life form, the security blanket, of Linus. But both he and Snoop were readily defeated, and held captive.

Linus intended to insanely sacrifice them both too to his deity the Great Pumpkin. To Brown’s surprise, his younger sister Sally was now also working with Linus. 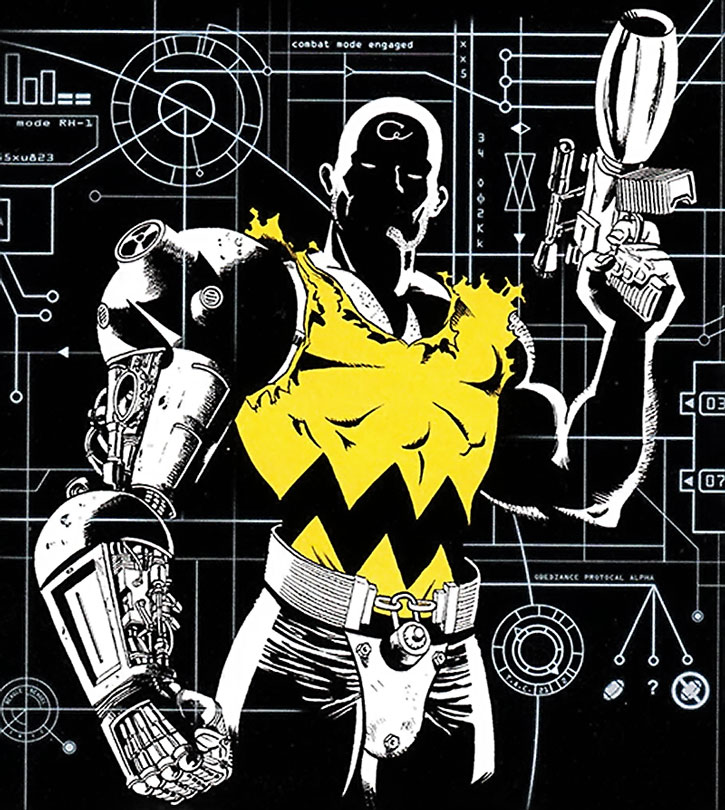 Just as a great mutated pumpkin-like beast appeared, Brown broke his chains. He shot Linus’s security blanket, then got away. As a result the Great Pumpkin fell on Linus, his sister and the red-headed woman, thus killing them all.

Having failed at his apparent last chance of redemption, Brown, disheartened, now walks the wastelands. He does odd jobs and whatever interests him at the moment.

Weapon Brown is a fearsome cyborg with a right metal cyborg arm that, while walking the wastes, is clad in a large protective wastelander trenchcoat and heavy boots.

Brown is tough as nails with no sympathy for other wastelanders. He is practically a psychopath – much worse than many of the wasteland psychos he encounters. He commonly greets the prostitutes he knows, such as Patty Mint, with a slap.

He very often has nightmares, while his dreams and actual memories are only slightly better than those. Sometimes when he expects trouble skeletons, rats etc. will speak up and warn him about danger and traps. Clearly, he is mentally ill.

Brown seems to have had a fear of failure all his life. For most of his life he waited for some feeling to fill his heart. When that didn’t happen he filled the emptiness himself by mayhem. This occurred after forcibly being conscripted into the Eastern Syndicate for which he created lots of dead bodies.

For unknown reasons he worked obediently for this Syndicate. And he is now seemingly somewhat haunted by the memories of what he did during that time. Perhaps he simply didn’t have anywhere better to go in the world after the war. Or perhaps his mind was further warped up by Dr. van Pelt when he was rebuilt into a cyborg.

When he finally met a girl he opted to drop it all, leave his bad habits and take up a simple man’s life with her in what’s left of the planet. Bliss was temporary only, however, since she was kidnapped and he had to revert to form.

Bitterly, he failed to save her, the red-headed girl, and realized that he didn’t want to see what’s left of his dream after the nightmares have taken their turns on it. His dreams fading again, he reverted to mean, round-headed son of a bitch.

He now roams free to pass his time in any endeavor that seems worthy in the post-apocalyptic wastelands.

“You ok, Snoop ? Let’s see your mouth. Yep. That tree fucked it up good. Don’t worry, boy. Your mouth will feel a whole lot better wrapped around Linus’s throat.”

“Now start talking, or tonight Snoop here will be shitting your fingers.”

“Well, well, Lucy. You certainly opened up a door, didn’t you ?” (related to his repressed memories) “I’m going to enjoy closing it. I’ve got a new game we can play. I call it ‘bleed and scream’.”

“I know what she means. Kill rays in the ceiling. I felt their targeting beams hit my skull the moment I walked through he door. No ordinary man could unholster his rod fast enough, dodge quick enough, to torch the ray projector before they cut him into smoking chunks. And I’m no ordinary man.” [Pom, skreee, za-kow, skreee, pom, spang and ray projector is destroyed.]

Linus: “How unexpected ! An infidel voice of dissent. And one I know well ! How is it you have found me, Charles ?”
Brown: “I looked in the yellow pages under ‘Assholes-major’. Step away from the girl so I can start harming you.”

Bonuses and Limitations:
Claws are part of the cyborg right arm and are retractable.

Snoop (while a reimagined form of Snoopy who was a beagle) is a large, dangerous dog. He uses the stats of a typical German Shepherd dog, but, being very tough, has a one full AP higher BODY score. It also has, if animals are considered to have Motivations, a Psychopath.

Snoop is blind on his left eye, which is covered by a scar. It wears a dog collar with long metal spikes and obeys Brown’s every command, and is likely his best friend. 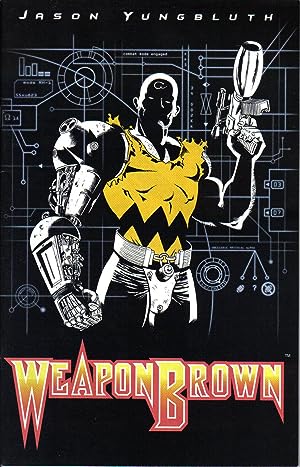 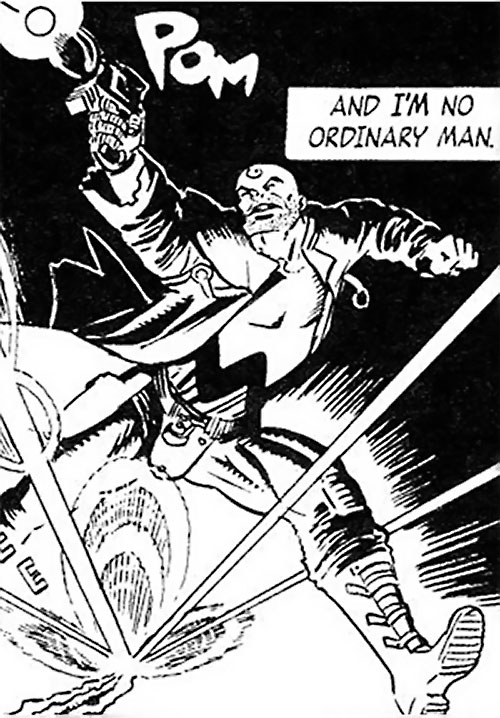 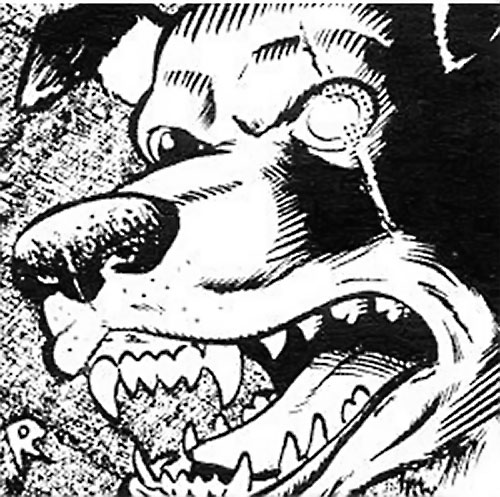