A capable combatant, skilled with most weapons, the Weapons Master has a vast array of high-tech weaponry, which he usually has prepared for the targets he knows he’ll be facing.

See his game stats for the weapons he deployed during his 1992/93 appearance.

A leading intergalactic arms trader, the Weapons Master enjoyed the acquiring of his special weapons more than anything.

Hired by a Dominator to acquire a Green Lantern power ring, Weapons Master chose to target Guy Gardner. He hired the Royal Flush Gang to draw out the Justice League, to gauge their abilities in combat before attacking himself.

When he did strike, he took them down fairly quickly, despite the interference of Bloodwynd. He abducted them to his Infinite Void, where he intended to play with them before killing them.

Blue Beetle managed to outwit him, allowing Gardner to retrieve his ring. Thus, the Weapons Master was forced to flee. Unwilling to let the failure mar his reputation, he killed the watching Dominator and fled Bloodwynd.

While dimension-hopping he came across the imprisoned Rott, who was trapped within Bloodwynd’s gemstone. Unable to free him alone, they came up with a plot to manipulate the Justice League into helping.

Their plan got the League involved, but collapsed when they proved too much for the pair. Furthermore, the Atom (Ray Palmer) disabled the Weapons Master’s tech before he could teleport away. Captured by the League, he probably ended up in prison.

Enjoying the challenge of besting worthy opponents, Weapon Master only enjoys doing so when prepared for them, having had time to study his targets. Any unforeseen factors are greeted with irritation. He can easily become enraged if his enemies do something he sees as cheating (basically anything which outsmarts him).

His reputation is more important to him than any sense of honour, and he has no problem executing employers who’ve seen him fail.

“I’ve beat the best in the universe. The Justice League will hardly threaten me.”

“My dimensional arsenal is limitless. I can access the best weapons of virtually any planet in the universe.”

“A sorcerer ! This is new to me ! Unexpected ! I will not tolerate that ! After all the work I put into this operation, I refuse to be sandbagged by a cheap parlor magician !”

“What is it that makes life worth living ? Money ? Power ? No. it is the challenge of acquiring those trappings of success. The challenge. The win. The game. That’s what it’s all about.”

“I am the premier arms dealer in the universe. I have bought and sold weaponry of every type imaginable, to almost every race imaginable.”

Equipment:
It’s unclear where the WM’s dimension-hopping technology is housed. Atom managed to dismantle it, seeming to claim it was in his armour, but when he first appears he summons his armour, implying the technology is elsewhere about his person (or maybe he can summon the armour remotely).

It allows him to travel between dimensions, teleport, summon weapons from his other-dimensional armoury, and send other to other dimensions at a touch.

While it doesn’t appear necessary, he usually says the item number of the weapon he wants (there are a few points at which they just appear, although it’s possible he whispered, in which case the summoning part of Dimensional Travel should have the appropriate Limitation) [BODY 05, Dimensional Travel: 10, Bonuses & Limitations: Dimensional Travel has the Location Jumping Bonus (+100 BC), and the Banishment portion of the Power has a Range of Touch, with its AV being his DEX (-2)] 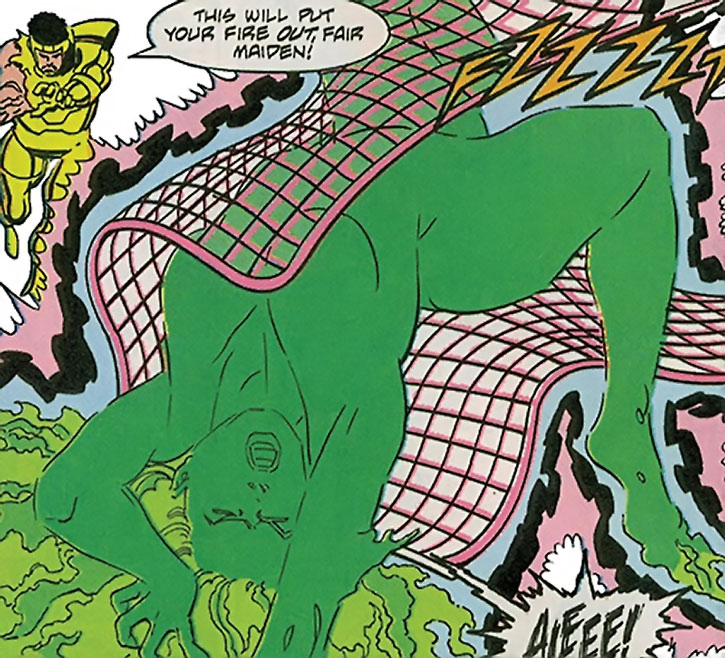 A dimension in which visitors can only move if the Weapons Master allows it (presumably by means of a Gadget). He can effectively use Paralysis: 25, able to even hold Superman in place, although this has to be dropped a brief moment before a victim leaves this dimension, not really long enough to move, but long enough for Guy Gardner to mentally command his Green Lantern ring to return to his hand and block his removal (they get a single Action if they beat the Weapons Master’s Initiative). 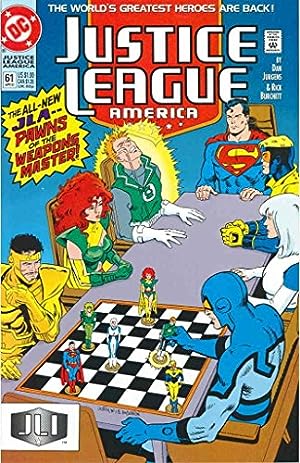 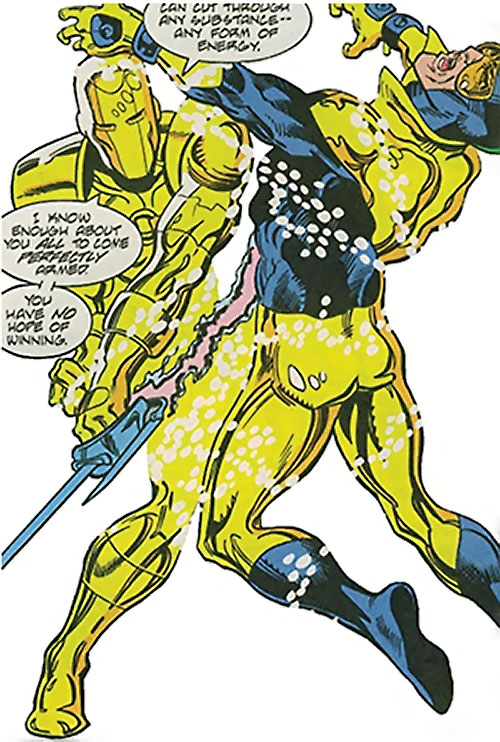 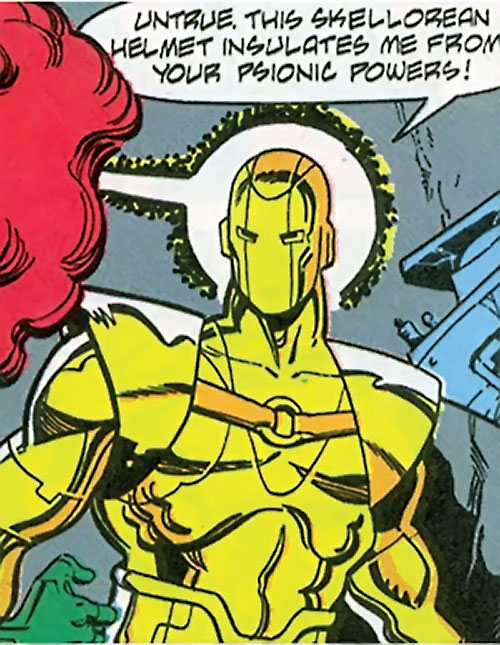 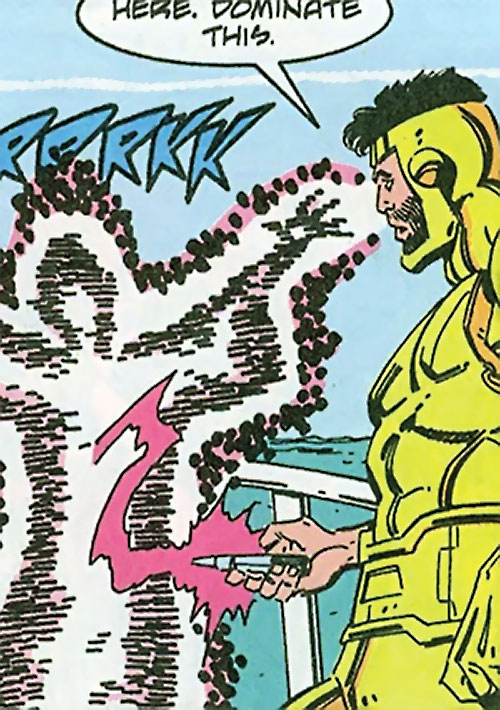 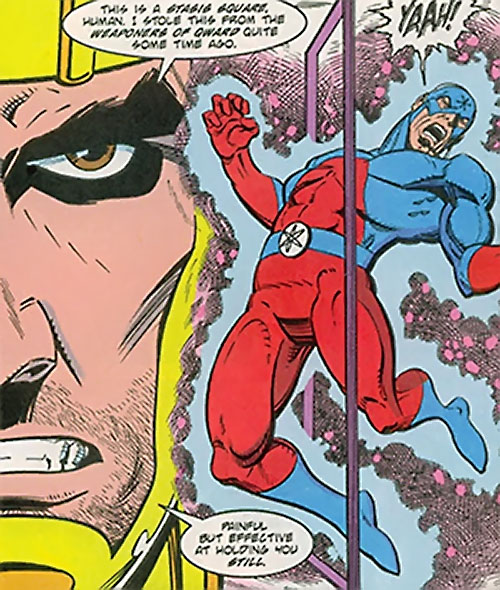 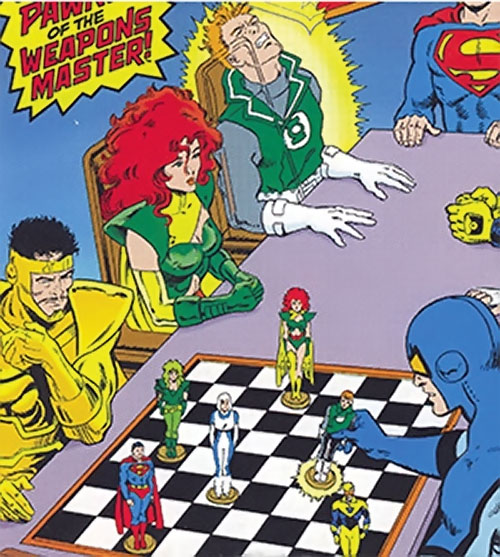