These strange, aliens-in-disguise characters were chiefly seen in a 1991 Quasar storyline.

And yes, I’m the one person who thought that they were interesting. But they are, strewth.

All three Weird Sisters seem to radiate an antipsi field. It was strong enough to dampen even Moondragon’s telepathy. It might affect psionic  abilities other than telepathy, but that has not been demonstrated. The antipsi effect stops when the Sisters are knocked out.

The Sisters are solid hand-to-hand combatants and will Team Attack as necessary. However, they were clearly outmatched by Moondragon’s peak human martial prowess.

Furthermore, they lack durability. While the Sisters are good offensive fighters, they don’t soak it as well as they dish it out.

Maelstrom stated that the Sisters had unspecified psionic gifts that would help him attune with the Quantum Bands and achieve oneness with the cosmos. What they did during the attunement session, and whether these abilities can be used in other contexts, is unrevealed.

They might have some sort of low-key cosmic awareness. Perhaps achieved by pooling their psionic resources.

Each sister also has specific abilities.

Beauty can create an aura of pure, bright light around herself. Heroic opponents will probably not be blinded outright, but the glare makes it impossible to properly locate her. It is thus difficult to hit her with ranged attacks, and most hits are but glancing blows.

This radiance doesn’t seem to be normal light. Therefore, one suspects that defences against bright light will not work against it. Beauty presents this radiance as a manifestation of her pulchritude, but she’s presumably just being cute about it.

Truth can turn her hands into swords, also covering about half of her forearms in metal. How sharp those blades are is unrevealed – the stats are but guesses. She said that her blades could slash through lies and illusions, but what that means is unrevealed.

Truth seems to have vision powers. She once made her eyes glow and seemed to see in the dark. The vision powers listed in our game stats are tentative. One imagines that she might also have some sort of illusion-defeating power.

Charm can extrude strange tentacles-legs from her body, tipped with poisoned claws or with pincers. The pincers have a strong grip, capable of holding most people in place.

The poison from Charm’s limb is an odd thing. Moondragon could operate without hindrance whilst poisoned, though she then had to meditate to flush the toxin from her bloodstream before it was too late.

On the other hand, an Eternal hit by her venom suffered from highly accelerated ageing. It would have been fatal without extraordinary medical care. Ageing Eternals in this way is not generally thought to be physically possible.

There’s too little material to narrow things down or provide stats. No-Prize Hypotheses  include:

The nature of the Weird Sisters is unrevealed.

It is entirely possible that they are from one of the numerous species of quasi-human space aliens. If so, the Shakespearean reference in the “Weird Sisters” name likely is a coincidence.

The Sisters were found on the Laboratory World operated by the Stranger, among a number of aliens and a surprising number of Earth folks. See Marvunapp’s handy list . Presumably they were prisoners and test subjects there.

After the Laboratory World was wrecked in a fight between the Stranger and the Overmind, Jack of Hearts (Jack Hart) helped prisoners from Earth return to their home world. The Sisters joined the convoy, telling Jack that they were from Earth.

After a clash between Jack of Hearts and Quasar the convoy had to be left stranded in Siberia. The refugees made their way to more hospitable areas on their own. 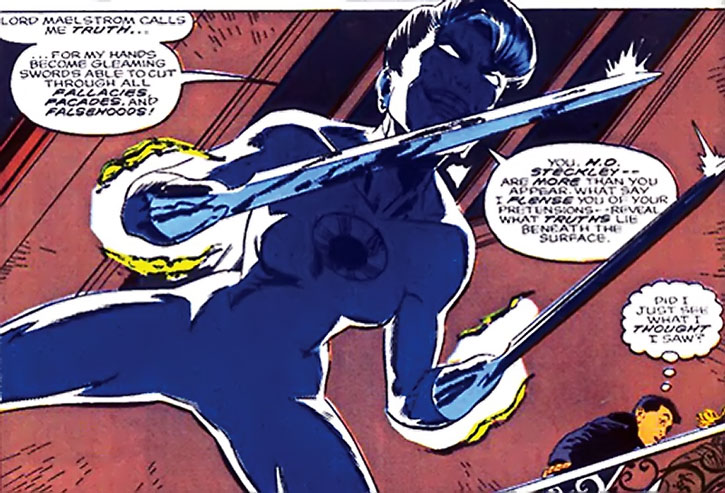 The Sisters soon became servants of “Malcolm Stormberg”, actually the mad villain Maelstrom. Since they found him and entered his employ in a matter of days, it is likely that they had come to Earth specifically to join him. At that point Maelstrom was prophesied as being the Cosmic Assassin, who would destroy the cosmic being Eon and perhaps reality.

The Weird Sisters were used by Mælstrom as enforcers, psionic dampeners and escorts. There were implications that they also provided sexual services. After Maelstrom cut off Quasar’s hands to steal his Quantum Bands, they helped him attune himself to these artefacts.

When Quasar’s allies came to investigate, they assisted the Minions of Maelstrom to repel them. But they were not terribly successful in this role — Moondragon single-handedly thrashed them.

Along with the Minions of Maelstrom (Phobius, Helio, Gronk), the Weird Sisters later launched an operation to drain the life force of a number of Deviants, Eternals and Deviant-Eternal hybrids to resurrect. The goal was to repower Maelstrom.

The plan more or less worked. However, Maelstrom aborted the procedure at the final stage when he realised that his son was among the unwilling life force donors.

It is unclear whether the Sisters are persons. They seemed utterly devoted to serving Maelstrom, and to have little sense of self. They’ll just do whatever he asks. Maelstrom described their minds as alien.

It is possible that the slight confusion as to which of the Sisters is which was not a mistake. It may have been an indication that they don’t have a Human-like identity. 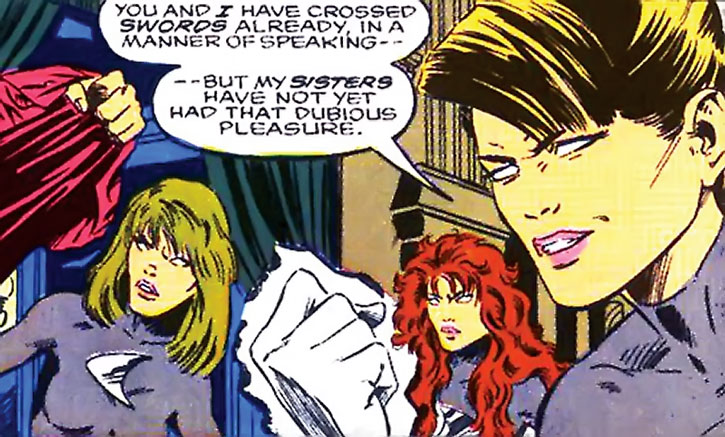 They may not even have had names before they came to Earth. There are both indications that “Beauty”, “Charm” and “Truth” are their actual names, and that Maelstrom made them up. A logical explanation is that they never had names before Maelstrom gave them one.

(“Charm”, “Truth” and “Beauty” are three flavours of quarks  – a type of elementary particle (yes, particles have flavours. Long story). The modern terminology for Truth and Beauty is Top and Bottom, which is less fun but more coherent with the other flavours.)

The Weird Sisters talked in an unusually clinical and detached way. They once did that thing where one starts a sentence, the other continues it and the last finishes it.

They seemed to have a clear understanding of the role of Maelstrom, Eon and the Quantum Bands even before they reached Earth.

They were unfamiliar with famous Earth persons such as the Thing.

“I am Beauty — so perfect in form and feature that no being may gaze upon my utter perfection without being blinded !”

“Could you not whittle away at the arms and scoop out all the organic material from inside the bands ?”

“I am Charm. I think you’ll find the touch of my various appendages… dare I say it ? Charming.”

(Seeing Moondragon) “Ewww, what happened to your hair ?”

“Lord Maelstrom calls me Truth — for my hands become gleaming swords able to cut through all fallacies, façades and falsehoods !”

“You […] are more than you appear. What say I flense you of your pretensions — reveal what truths lie beneath the surface ?”

The following is common to all three sisters :

Bonuses and Limitations:
Neutralise is Always On, has an Explosive Radius centred on the Sister, and only affects telepathic abilities.

Equipment:
The Sisters used Gadgets from Maelstrom’s arsenal, including image inducers and teleporters.

On top of these shared stats the Sisters have the following abilities.

Bonuses and Limitations:
See the Powers & Abilities section for a discussion of Charm’s Poison Touch. 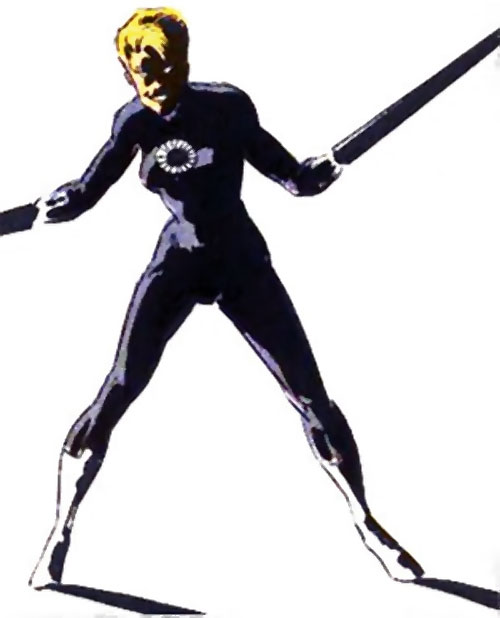 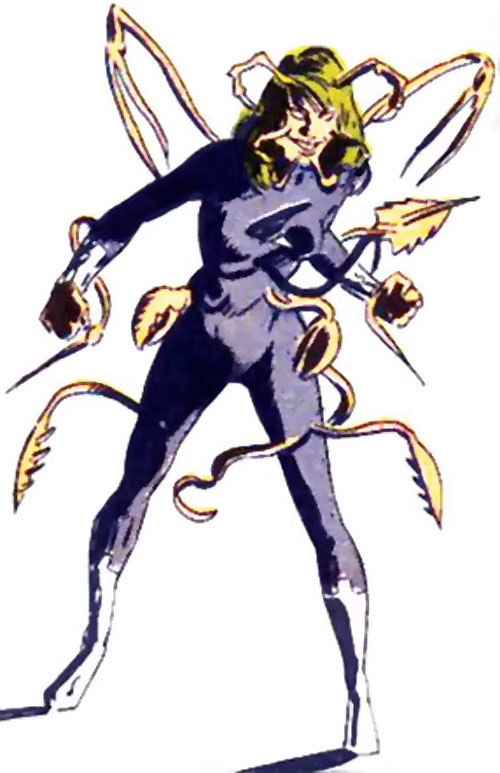 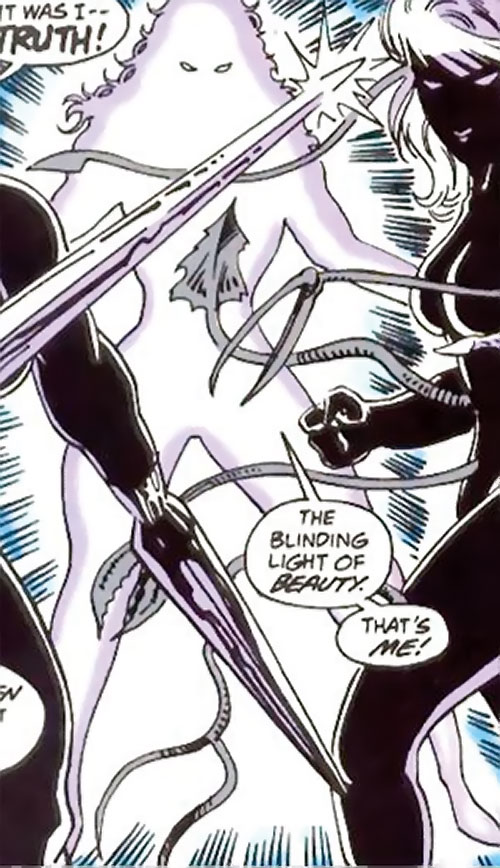