Well-Spoken Sonic Lightning Flash can move at superhuman speeds, of at least hundreds of miles and hour. He also can use his speed to create bursts of air (the “Wally West Special”).

(See the Super Young Team entry for his time with the team.)

When the team split up briefly, Keigo started walking through the American desert. He gathered followers who joined him on his walk. What they thought he was leading them too he didn’t pay much attention. He’d simply felt it was the right thing to do.

Following their dealing with the troubles in Japan he began spending time in Las Vegas, hitting casinos (in a non criminal way) with Doc Dread and the Royal Flush Gang.

Enjoying the celebrity lifestyle, Keigo loves dancing and using his powers. He seems a bit detached from his teammates, and his mind often appears otherwise occupied, acting with a Zen-like calm.

“Thisplaceistrickedouttoaninfinitedegree ! They thought of everything… No cliché left unturned.”

Bonuses and Limitations:
Air Control is Contingent on Superspeed (-1). 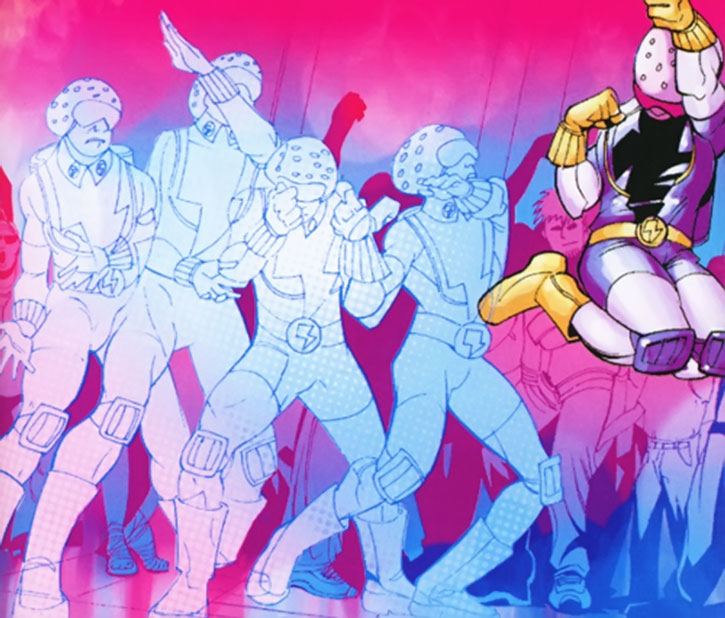 I’ve read some sites referencing that his powers come from his shoes and battery pack.

But there’s no evidence in what I’ve read. And the way he sometimes talks too fast and can search a large building in seconds implies faster cognitive abilities which are less easily explained by being artificially derived.