Westin’s Sigil allows him to learn how to use any piece of technology. He does that by peering into the past to observe how others used them.

The Sigil also makes him hard to kill, allowing him to recover from seemingly terminal amounts of damage.

A thief and con-man, it’s unknown how he gained his Sigil. He was abducted to another universe, where he found himself stranded on a planet with 99 other individuals from various parts of his own universe (the Bright Universe as the residents of the Negation referred to it).

When one of the prisoners, Kaine, convinced them that they had been brought there for testing by hidden observers, the prisoners agreed to follow his lead. His lead led their captors to bringing them into the prison proper, where they underwent further lethal testing.

Allowing Kaine to again take the lead, they broke out of the prison. Seizing a craft, Westin started it up, but its automated systems took over, launching it while only around a dozen of them were aboard.

Days later a group of other escapees stumbled across them on a lifeless planet. Evinlea immediately attacked for their perceived abandonment. The conflict was soon ended when cooler heads discussed the matter.

Before they could decide on their next course of action, they were attacked by Lawbringer Qztr, one of the elite of the Negation. After easily handling even Evinlea, Qztr apparently slew Javi.

Qztr was distracted from killing them when he discovered baby Memi to be completely immune to his attacks. He abducted her, taking her to the Negation god, Charon.

They soon found allies when the Battle Group came under attack from the Australians. Also recently abducted from the “Bright” universe, they had gained enormous power in the transit. They were dedicated to freeing the Atlantean, Gammid, from the clutches of the Emperor Charon.

Kaine’s group allied themselves with the Australians. They then used the shell of the destroyed flagship to slip through the warp gates and charge the Negation homeworld, where they’d learned both Memi and Gammid were being held.

Rescuing Memi and Gammid, although the Australians were killed and Kaine was missing for a short while, the escapees fled the homeworld. When they heard from Kaine soon after, they had to stop at a nearby planet to try and acquire some tech to get to him faster than their ship would currently travel, as they’d be unlikely to get to him in time as it was. 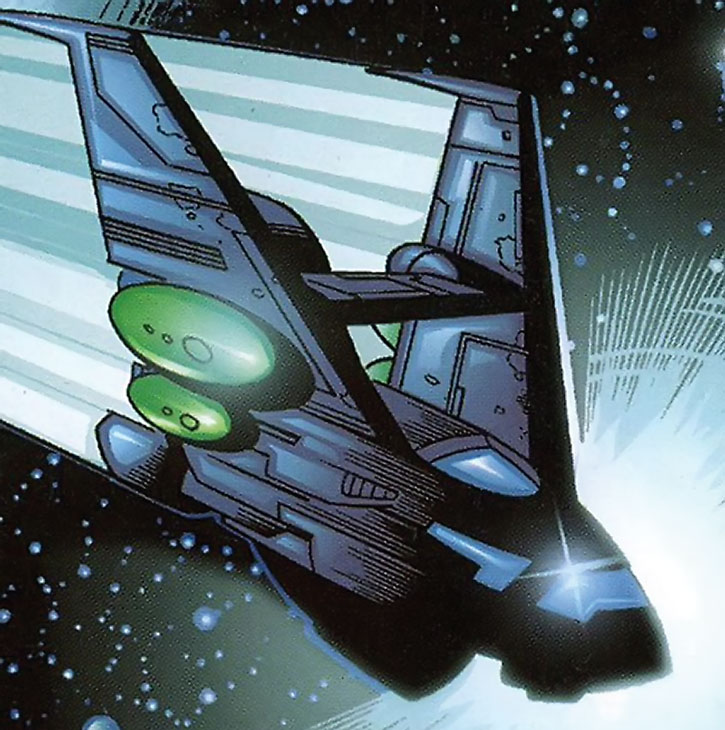 Liz and Westin were sent out to find the technology, despite her objections that she’d work better alone. He managed to lose her long enough to make contact with an underworld type who could acquire the parts he’d need. Westin talked his way out of a beating when she did catch up to him.

Since they didn’t actually have anything to trade with, however, Liz had to sneak into the meeting place while Westin distracted them. She easily dispatch them, allowing the pair to abscond with the goods. Westin confronted Liz about her method of gathering intelligence, which most of the escapees suspected anyway, but agreed to keep it secret if she did likewise about his food cache.

They rescued Kaine, and he convinced them to try and help free the resistance leader, held in a secure prison facility. The mission cost Matua his life, further embittered some of the escapees against Kaine.

While re-supplying on a remote planet, they were attacked by agents of Charon, led by a former escapee, Javi. The battle cost the lives of Javi and Gammid. This left most of the escapees tired of their flight, and of Kaine leading them on an apparently impossible crusade against the Negation.

Westin was among the escapees who decided to find a quiet planet where they could try and make lives for themselves.

Friendly and helpful, Westin ingratiates himself into company, always looking for how he can gain advantage from a situation.

He’s strictly a non-combatant, making sure he gets to cover when trouble starts, and always trying to have someone about to watch his back.

Bonuses and Limitations:
Interface only works on machines capable of being manually operated by humans, which have been previously used (-1).

He only gained the Exile and Mistrust Drawbacks, and the Language Advantage, in the Negation universe. Prior to the shopping run after their visit to the Negation throne world, his Spacecraft didn’t have Fabricate or Warp.

The Sigil allegedly makes its wearer harder to kill, so I’ve used Invulnerability to model this.